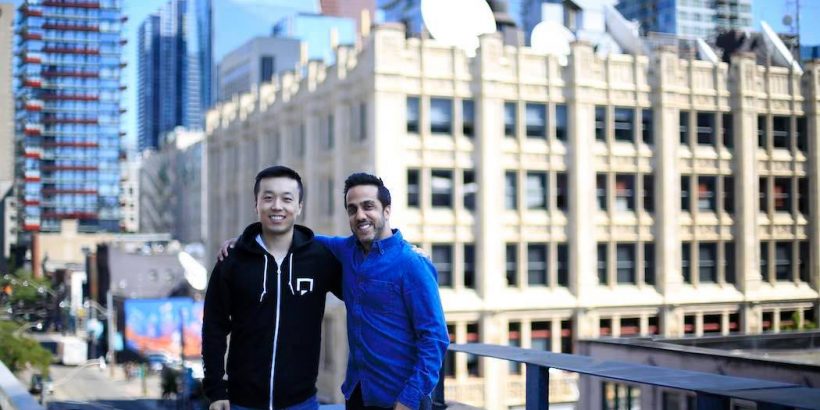 Toronto, Canada-based ecommerce startup Snapcommerce today announced that it raised $85 million in a funding round led by Inovia Capital and Lion Capital, bringing its total venture capital raised to over $100 million. Snapcommerce, which is on the path to an initial public offering, says it plans to use the funds to expand into new consumer verticals while scaling its product and team.

While consumer spending in the U.S. dipped last month year-over-year, on the whole, the pandemic has supercharged ecommerce. According to data from IBM’s U.S. Retail Index, business closures and shelter-in-place orders accelerated the shift to digital shopping by five years, with online shopping projected to grow nearly 20% in 2020. Based on the survey data from BMC and Mercatus, ecommerce grocery orders alone totaled $5.9 billion, up 3.6% from $5.7 billion in August.

Snapcommerce, which was cofounded by serial entrepreneur Hussein Fazal and former Google employee Henry Shi in 2016, uses natural language processing and AI to drive commerce over messaging platforms including text, Facebook Messenger, and WhatsApp. Fazal previously cofounded AdParlor, a social advertising solution that he bootstrapped to $100 million in revenue before selling the company in 2011. Shi, who cofounded a social network for post-secondary students, spent time as a machine learning engineer at LendUp before joining Google as a YouTube Analytics engineer.

Snapcommerce began as Snaptravel, a messaging-centric travel booking service. But in March and April, as the pandemic began, sales dipped 70% to 80%, leading Snaptravel to lay off one-quarter to one-third of its staff. In October, Fazal and Shi launched Snapcommerce under Wise Travel Technologies, the legally registered business name behind Snaptravel. To fuel the launch of Snapcommerce, earlier in 2020 Snaptravel acquired the intellectual property assets of chatbot marketing startup Chatkit AI, which connected consumers and businesses through AI-powered conversational channels. 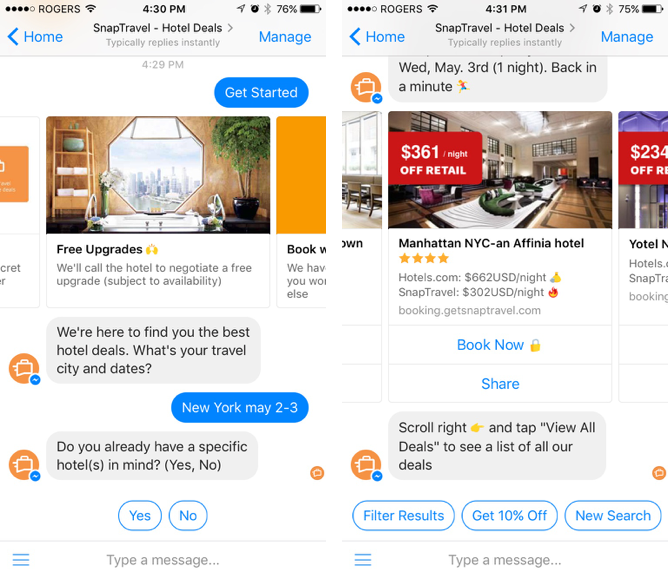 Above: Snapcommerce’s AI-driven messaging in action.

For businesses, Snapcommerce generates personalized deal recommendations unique to each customer. For customers, the service delivers messages that spotlight products at tailored prices. Snapcommerce is vertical-agnostic, with plans to eventually expand into ticketing for sports, festivals, and events and merchandising, both in-store and online. Also in the works is Snapcommerce Subscription, a paid offering that will connect businesses with discounted offers and a white-glove concierge service run by Snapcommerce.

But for now, Snapcommerce has its eyes set on the travel sector with the aforementioned Snaptravel, which offers discounts up to 50% at over 200,000 hotels with “message-only” pricing. The subsidiary operates as a travel agent over messaging, where users send Snaptravel a message with a city, dates, and preferences and the service returns any matching deals.

“Snapcommerce collects terabytesof data including supply and demand information, customer browsing behaviour, and over 100 million messages exchanged with our services. On top of this data set, we have built multiple deep learning models to predict and optimize everything from pricing to preferences to predicting customer intent,” Fazal said. “As an example, our natural language processing engine is able to comprehend a customer’s query up to 98% of the time — as measured by a mean average precision score. Our AI technology is able to predict the likelihood of a customer making a purchase at a certain price. This has allowed us to automate the process of sending out personalized promotions to customers over messaging with offers to match their purchase intent.”

Snapcommerce, which has sent more than 100 million messages to over 10 million customers, expects to cross over $1 billion in sales by 2022. Despite the pandemic, Snaptravel users have made bookings in over 10,000 cities across more than 150 countries, the company says.

Snapcommerce attributes the growth to its platform’s marriage of millennial and Gen Z purchasing power and an uptick in “mobile-first” behaviors. A recent App Annie survey found that over 80% of younger consumers prefer shopping on smartphones compared with other devices. And Gen Z’s earnings are set to hit $33 trillion by the year 2030, accounting for more than a quarter of all global income.

“2020 was a record year for Snapcommerce. We’ve stayed focused on saving money for the price-conscious consumer by matching them with personalized promotions,” Fazal said. “We used our direct relationship with our customers to grow despite the pandemic. We drove the company to profitability and back to growth.”

Acrew DCF, Thayer Ventures, and Full In Partners, as well as existing investors Telstra Ventures and Bee Partners, also participated in Snapcommerce’s latest funding round. Among the startup’s former investors is NBA player Stephen Curry, who backed Snaptravel in 2018 through SC30, his investment company.