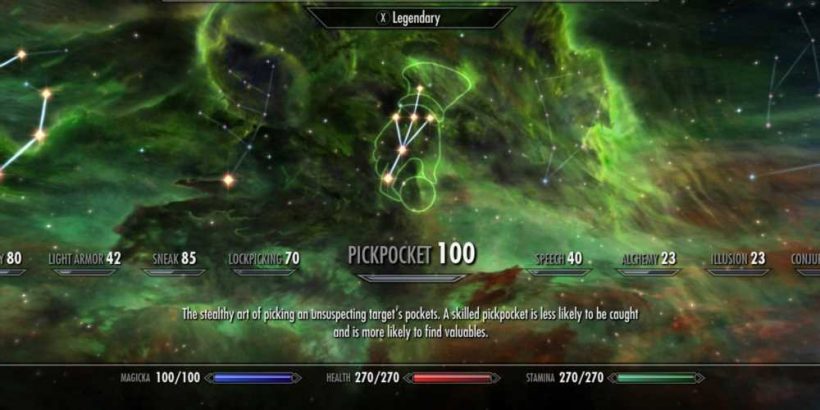 A Skyrim player has proven their pickpocketing skill by stealing the clothes from everyone in Whiterun.

For those who either haven't poured hundreds of hours into Skyrim or who simply played honestly without trying to steal from people, you might not know that, if you've reached Level 100 pickpocket and unlocked the Perfect Touch skill, you can actually steal the clothes right off of people's bodies. They will then walk around nearly completely naked without a care in the world and without even realising what you've done. Got to love that Skyrim logic.

Of course, as the Level 100 entry fee implies, stealing the clothes from someone is only for the most skilled of thieves. Not only do you have to reach the maximum pickpocketing level, but it's also not guaranteed to steal the clothes, as there's a percentage chance that it'll fail. Not only that, but you've also got to actually stealth around and make sure whoever you're robbing can't see you doing it. It's not for the faint of heart.

If you thought stealing clothes from one person was bad, how about robbing a whole town? Redditor PeterPandaWhacker proved their pickpocketing skill with a post on the Skyrim subreddit showing that they'd managed to steal the clothes from everyone in Whiterun.

The post shows a screenshot of PeterPandaWhacker stood in the middle of Whiterun looking at a bunch of citizens, who are all stood staring at him without any clothes, nonchalantly getting on with their day. Well, at least they've still got the boots. Alongside the post, PeterPandaWhacker said, "When you reach level 100 in pickpocketing, what else is there to do than to undress the entirety of Whiterun?"

Although there are seemingly an unending number of ways to play Skyrim and make it more difficult for yourself, the subreddit quickly took notice of the feat, rocketing the post to the top of the page. As suggested by Redditor Gunningham, the next step is clear – "Dress them in each other’s clothes."