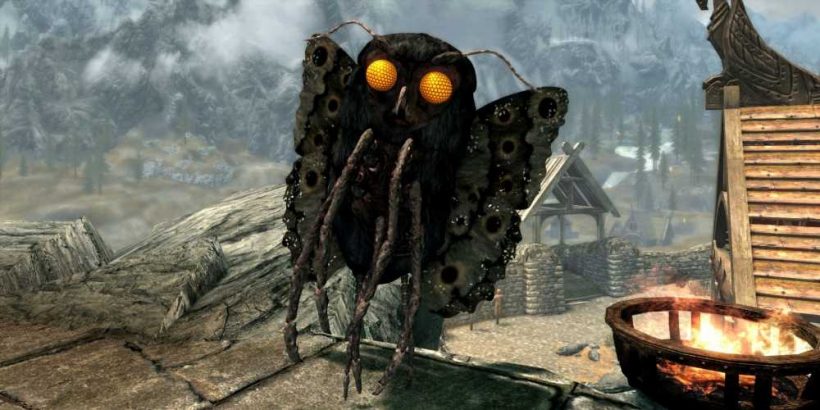 Skyrim has a bunch of companions for you to find and recruit for help on your journey. Lydia is just one example, a helpful Nord warrior who you're given upon becoming the Thane of Whiterun. What if Lydia is a little too dull for you though? What if you want a companion that can strike the fear of death into anyone that you come across in Skyrim? Well, never fear, as one modder has made it so you can have a variety of horrible insect men follow you wherever you go, modelled after a variety of Skyrim's creepy crawlies.

The mod is called Insect Race Companions and can be found over on Nexus Mods, uploaded by modder m150. You can also find a bunch of images showcasing all of the different insect creatures that you can recruit, some of which are based off of existing creatures such as Frostbite Spiders and Chaurus. There are also some custom monsters available to travel with, including one particular Mothman companion that Fallout 76 fans will recognise in a heartbeat.

If you're wondering where you'll be able to find and recruit these horrible creatures, m150 has even made them a little village in a cave south of Helgen. The location is called The Nest and features a deep chasm in which you'll find this race of insect creatures going about their daily lives. It's not just a weird dark cavern either, as The Nest features buildings, a canteen area, and even guards, so you'd better be on your best behaviour.

If you want to download the Insect Race Companions mod, just be aware that you'll need to have the Dawnguard and Dragonborn DLC before you can try it out. It's not even exclusive for PC players either, as those of you who play Skyrim on Xbox can download the mod via the official Bethesda website. There's also a video you can find embedded above or on m150's YouTube channel if you want to see what the mod looks like in action before you commit.