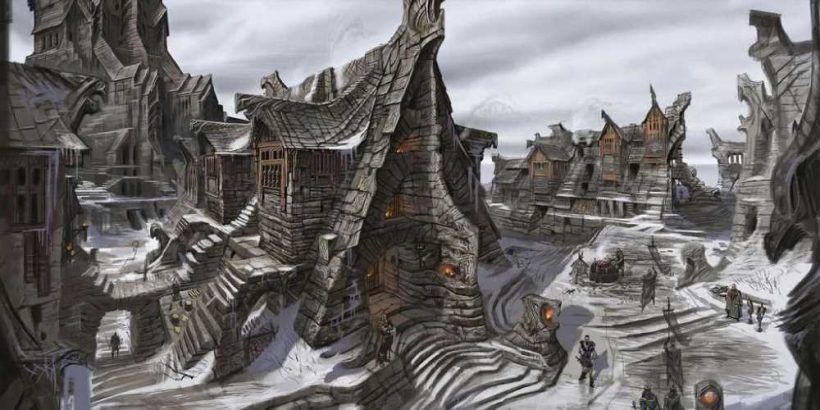 Windhelm's concept art looks similar enough to what we got in Skyrim's final build, but there are some notable differences such as the entrance being made up of slowly escalating steps with greyer buildings that flow into the foundations more. One modder is aiming to bring that vision to life.

Slin95hot posted a couple of pictures on Reddit showing the progress so far. In the screenshots, we can see long, curved steps making the entrance far more wavy, akin to the original concept art pictured above.

They said the idea behind the mod was to "beautify Windhelm" as they hadn't seen anyone else doing it – they didn't want to overhaul it or add new scenery or make a totally different city. They wanted to keep the Skyrim spirit intact but call back to its original vision. Well, semi-original. It first appeared in Daggerfall way back in 1996, but it looked like every other city in the game given the technical limitations.

But Windhelm did return in The Elder Scrolls Online – it didn't take from the original concept art but instead built on Skyrim, albeit making the city much larger. Buildings are bigger, everything is more spaced out, and there's a whole new marketplace to bring life to the capital. By the time of Skyrim, though, it's a destitute relic of a bygone era, held up by a Jarl inciting a civil war. It's not even the capital anymore, that title being given to Solitude.

Given that this is their first mod, it isn't clear when we can expect it to be finished, but slin95hot has been asking the community for help on things like NPC pathing and what to do with certain blind zones that can't be seen in the concept art. For instance, they asked about the missing wall between the graveyard and Candlehearth Hall with some suggesting a fence.

We've seen something similar with Mass Effect's happy ending mod, bringing the original story's conclusion to the game for the Legendary Edition. Maybe we'll even see this Windhelm mod inspire others to do similar work with the rest of Skyrim's cities.