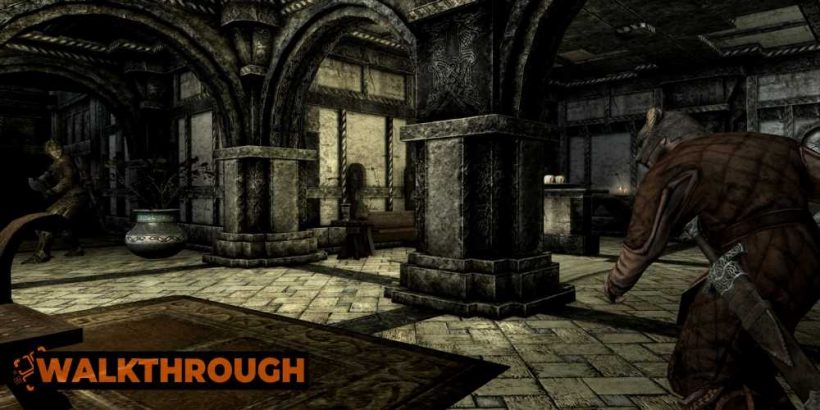 Bethesda's Skyrim has a total of 273 unique quests for players to complete, spanning from murderous assassinations to fighting for the Empire to uncovering your Dragonborn powers. One popular quest many players will encounter is Diplomatic Immunity, which is part of the main game's quest storyline. It involves infiltrating the Thalmor Embassy by way of a party in order to gain information on the Thalmor's plans and what they know about the return of the Dragons.

This quest is superb for those who love stealth games and spy elements. It’s got the whole package: a disguise, infiltration, distractions, murder, theft of classified information, and allies on the inside. Read below for a full detailed guide on the whole quest and what to watch out for while playing Dragonborn James Bond.

Updated October 14, 2022 by Nicolas Ng: This article has been updated to bring it in line with the rest of our walkthrough, offering additional tips and clearer instructions as to exactly what you need to do. 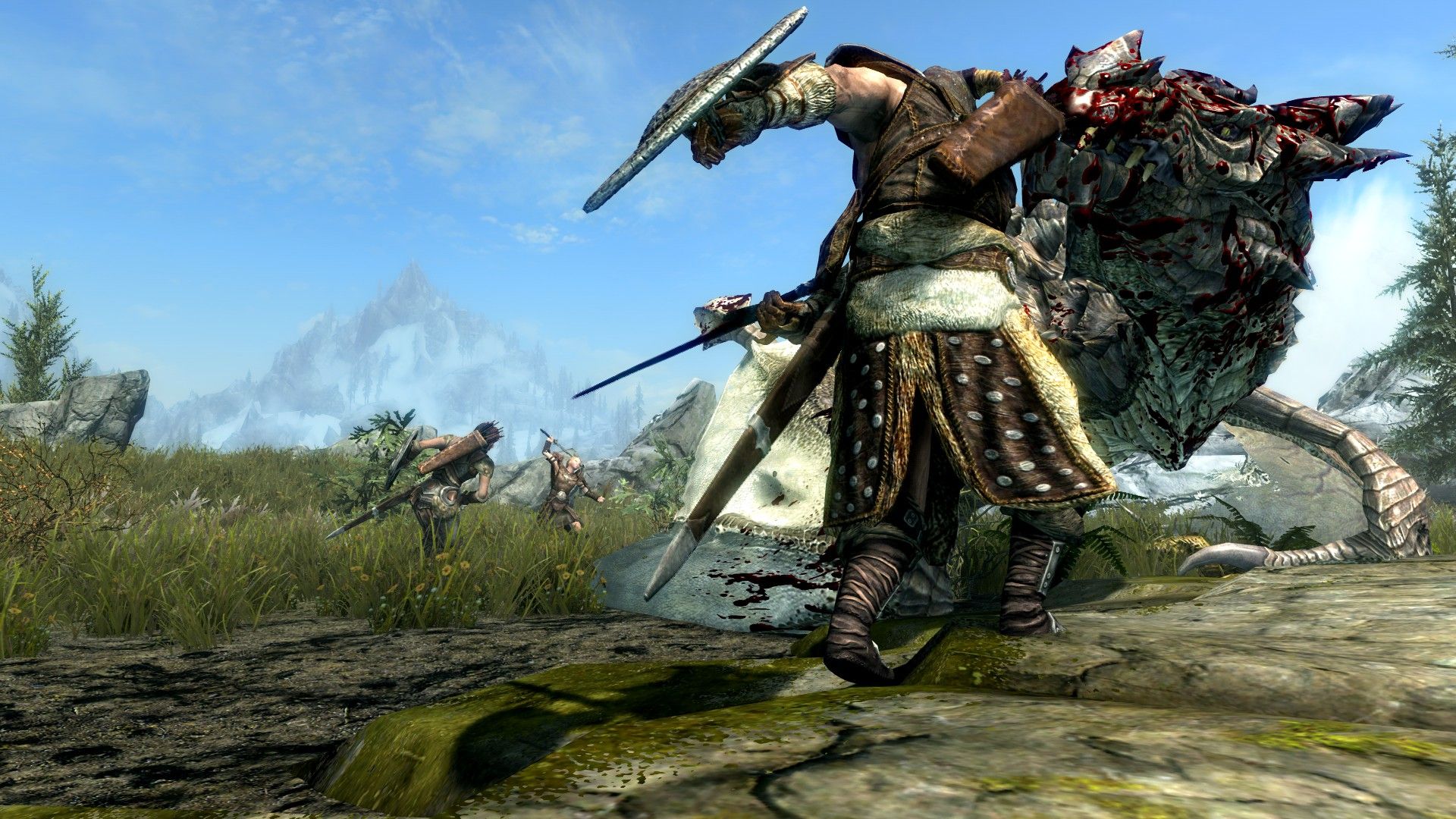 This quest follows after A Blade In The Dark, a quest that had Delphine demand you kill a dragon to prove to her that you are Dragonborn. At its conclusion, Delphine will trust you enough to reveal her Blade identity, as well as give you the key to her secret room underneath Riverwood's Sleeping Giant Inn. 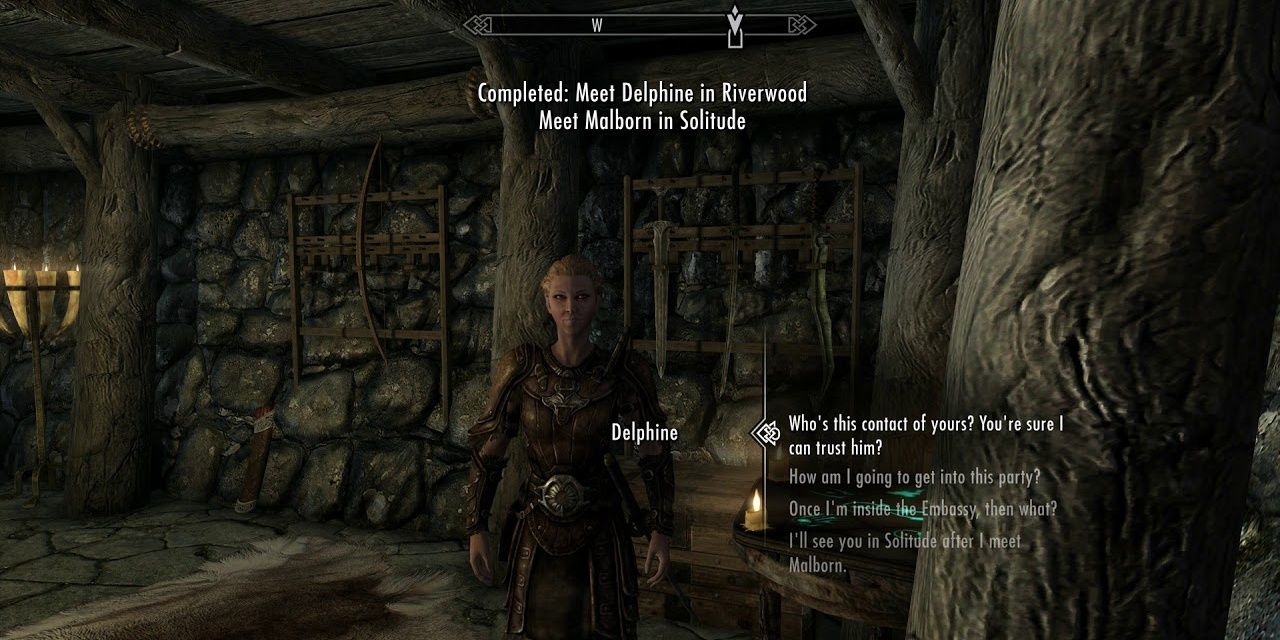 Safely secured in Delphine's secret office, she'll bring you in on her plan for finding out what the Thalmor knows about the return of the dragons. Thalmor Ambassador Elenwen loves throwing lavish parties at the Thalmor Embassy, so Delphine plans to send you to a party, disguised as an important guest.

Once you're inside, you'll search for any and all information the Thalmor has hidden away. It's a classic spy mission, and Delphine has someone on the inside: a Bosmer Elf named Malborn.

Delphine will send you to the Winking Skeever tavern in Solitude in order to meet Malborn, who can be found relaxing inside. He works at the Thalmor Embassy and offers you a chance to sneak in items that wouldn't be allowed past security. You'll only get one chance to give Malborn items, so make sure you have everything you want to give him when you talk to him.

Malborn has no limit to what he can smuggle in, but make sure it doesn't over-encumber your character later.

If you've finished The Companions quests, you may wish to bring Wuuthrad with you. There are few instances where you are guaranteed to be able to take full advantage of its bonus damage to elves. 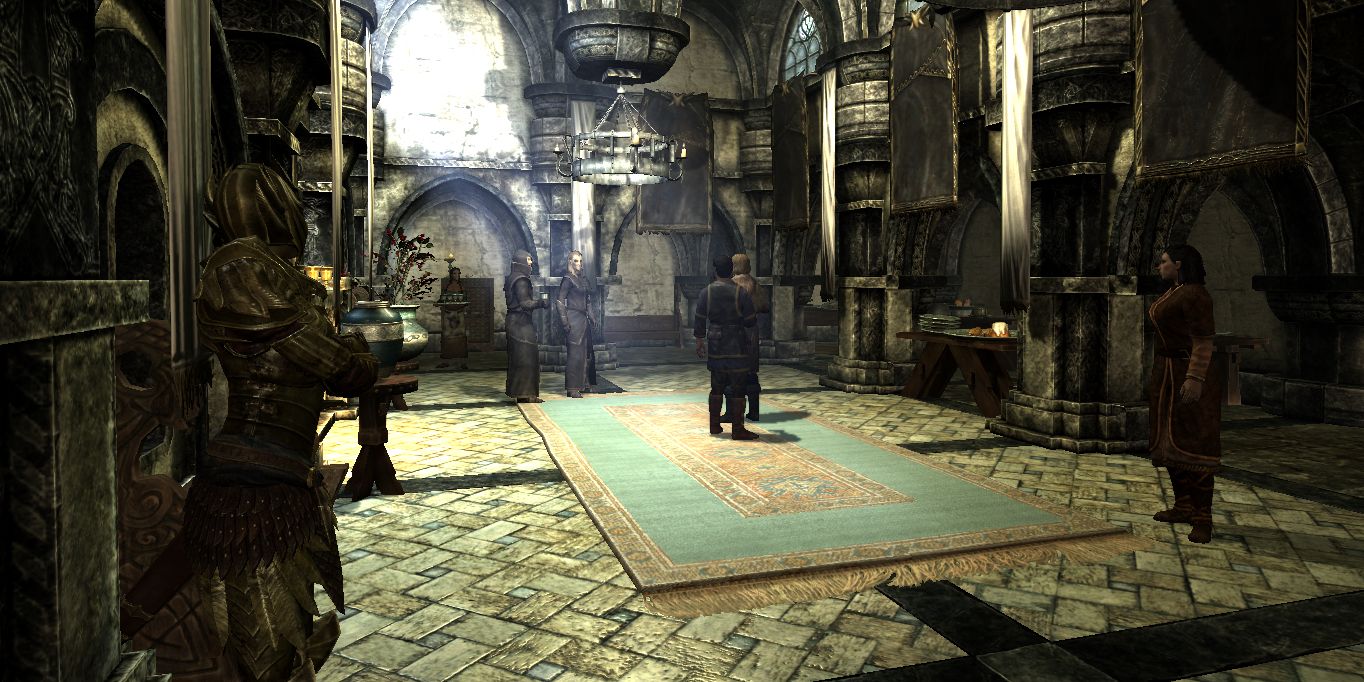 After you give your desired equipment to Malborn, you'll head to Katla's Farm in Solitude where Delphine will give you both your official party invitation and proper Party Clothes so the Dragonborn will blend in. Delphine also will hold all the gear and items you didn't give to Malborn, which you can retrieve in her office in the Sleeping Giant Inn afterward.

You'll automatically board the carriage heading to the Embassy after talking to Delphine, so make sure you're ready when you speak to her.

Arriving at the Embassy, you'll meet the drunk Razelan of the East Empire Company (who will be very useful later on), as well as a Thalmor Guard checking your invitation. Elenwen will ambush you immediately after entering, wanting to know everything about the mysterious guest at her party. Luckily, your friend on the inside, Malborn, will distract her for us before she sees through the disguise. Grab a drink from Malborn afterward and dive into the party and speak to the guests.

Players who have completed many quests will find themselves at an advantage when it comes to creating a distraction. Certain characters may appear depending on which quests you've fulfilled. Almost all of them can be used to create a distraction and allow the Dragonborn to slip away unnoticed. Here's a full list of who you can encounter:

While the incident is occurring, simply sneak out of the main room and towards the kitchen. 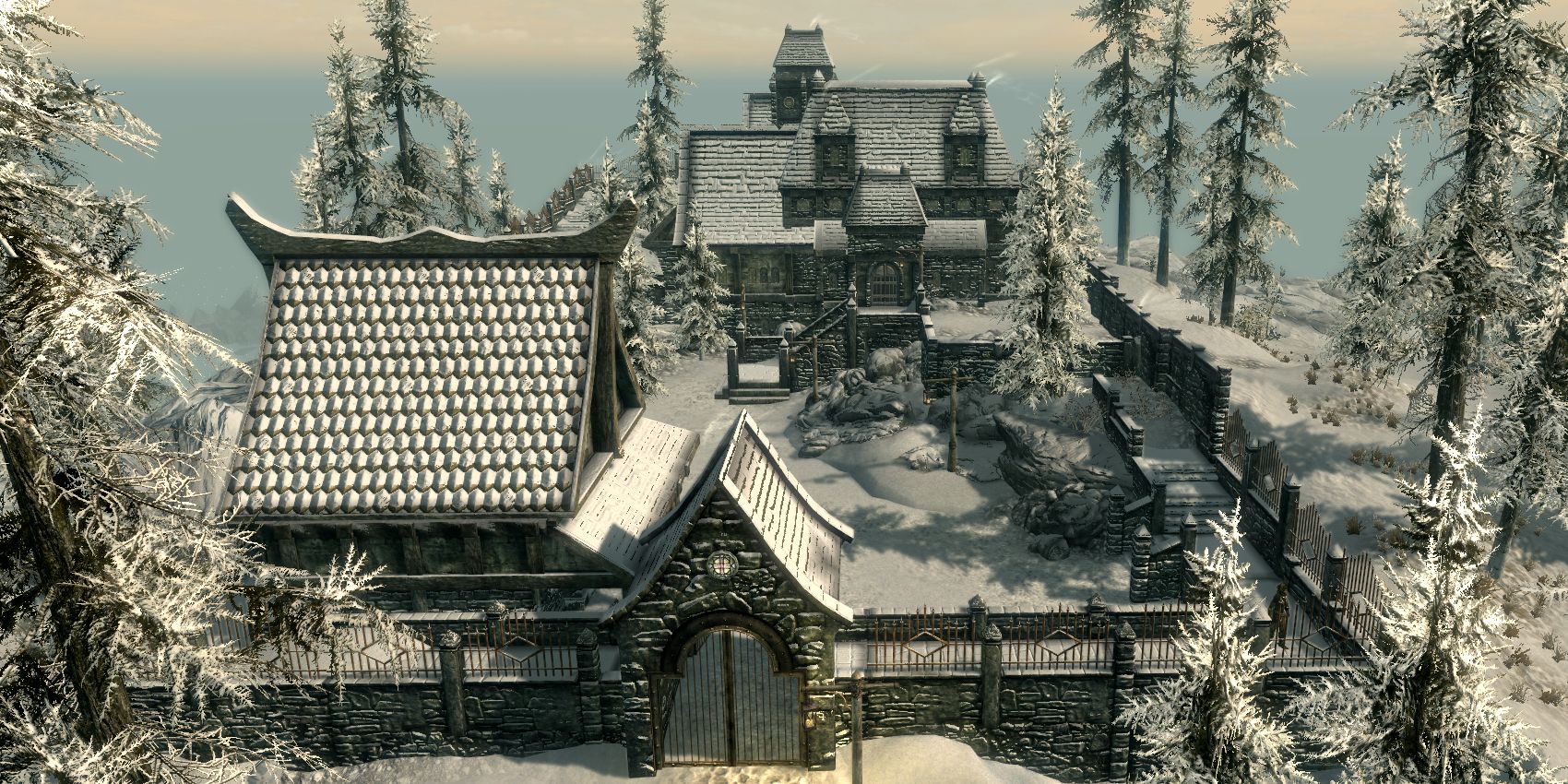 Once in the kitchen, you'll notice Malborn has blackmailed the Khajhit cook not to say anything about your presence, so you can safely grab your stashed items and proceed to the next stage of the quest, as Malborn locks the door behind you.

You'll then need to formulate a strategy for getting past all the Thalmor guards. Wearing Hooded Thalmor Robes can help make it harder to detect you, but you'll have to encounter the Thalmor Wizard upstairs. Most players opt to practice their stealthy sneaking around the guards' patrols. If you keep getting caught, murder is also an option.

If you are a High Elf, wearing Hooded Thalmor Robes will allow you to pass the guards so long as you keep your distance.

There are guards having a conversation in the first hallway you'll go through, which you can listen in on. Finishing their conversation allows you time to sneak past them upstairs and kill the Thalmor Wizard quietly and get his robes.

The outside courtyard is tricky, considering there are three different Thalmor guards and a Wizard who won't buy your disguise. You'll need to enter the Solar of Elenwen, though, so attacking them may be necessary.

Stealth archery can help you gain an advantage and not be immediately swarmed by guards. Spells like Calm and Fury will also work in your favor, as well as invisibility and high Stealth. 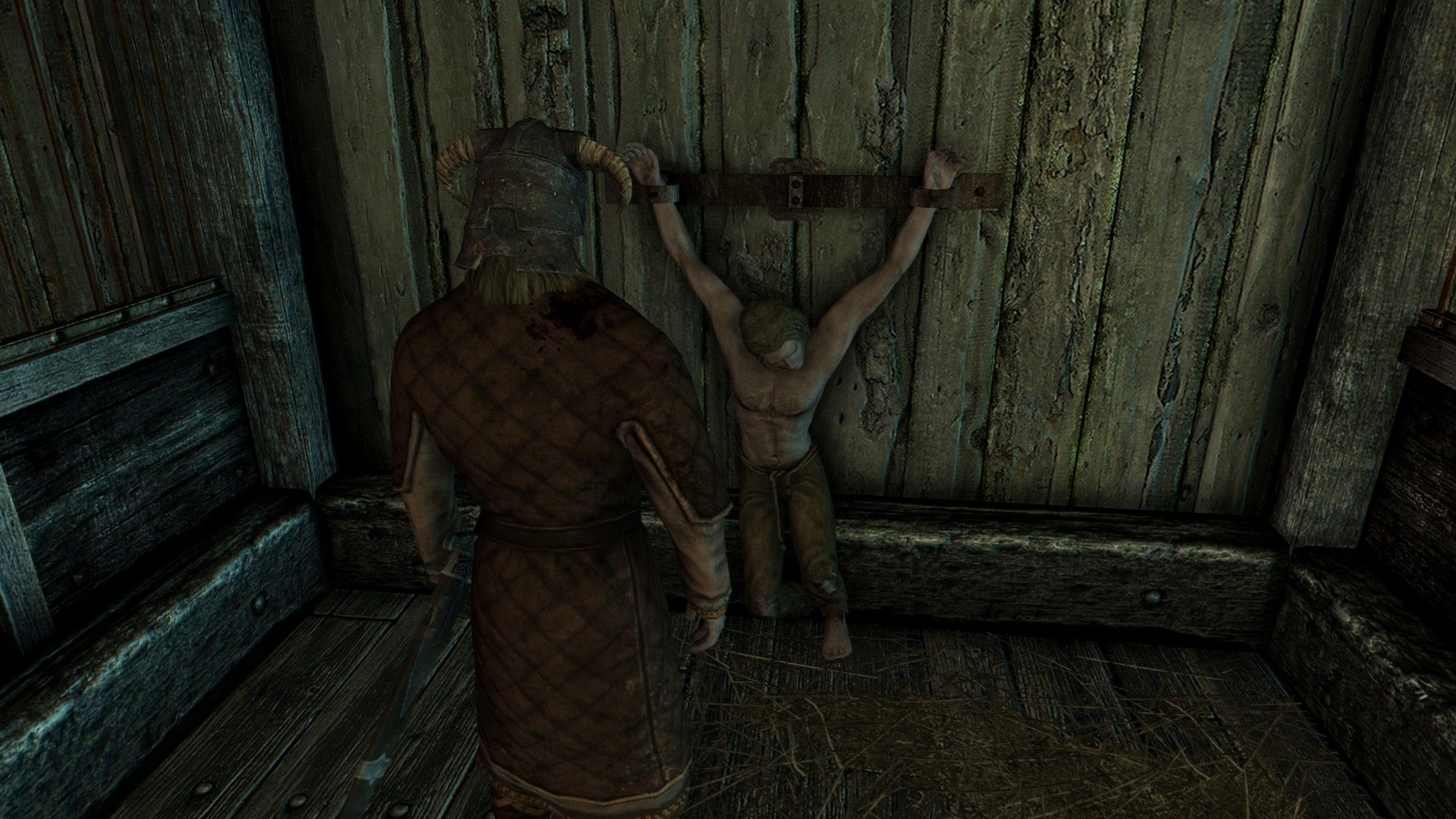 Once in the Solar, find the plant to hide behind and listen to the talk between Thalmor Rulindil and informant Gissur. They discuss their interrogation victim, Etienne, along with an unnamed old man. Gissur will leave the building after and Rulindil goes to the dungeon, leaving you to sneak past (or kill) a guard to get the interrogation chamber key from a chest in the northwestern corner.

If you're not a milk-drinker, you can save some time by killing Rulindil before he goes to the dungeon, taking the key from his corpse instead. Doing so will likely involve abandoning any pretense of stealth.

Also in the chest are files by the Thalmor on Delphine, Ulfric Stormcloak, and their investigations on the Dragons, exactly the info Delphine wanted us to find.

In the dungeon, Rulindil will be making a guard torture Etienne for info until he passes out. You can then proceed to kill both of them to get what you need, or you can use stealth to sneak past them both. Fighting Rulindil is not recommended, due to his powerful wizardry skills, though he does have considerable loot to grab. A stealthy backstab would work nicely. 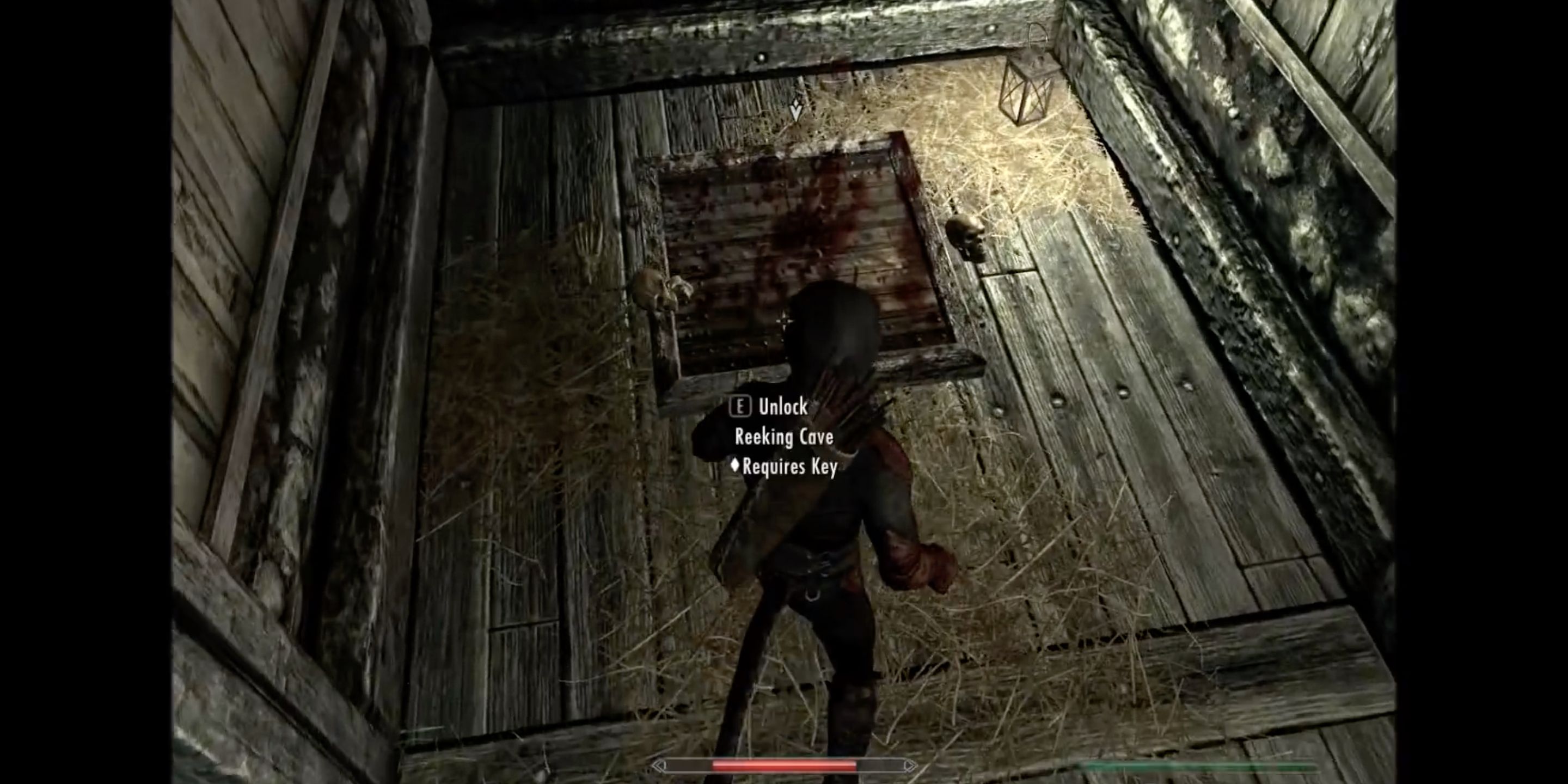 You can free Etienne and ask him for information now, or you can get the same info from the Thalmor Dossier: Esbern in the chest near his cell. After this, go up the east staircase and you'll find Malborn, who has been revealed as a traitor. The two Thalmor soldiers will kill him on the spot if you don't intervene, so make sure to act fast or save beforehand. The soldiers will have a trap door key on them, making it that more reasonable to kill them.

If you used Erikur to provide a distraction earlier, this will be the only moment you can free Brelas, who was thrown in the dungeon for the incident.

You now have NPCs following you, none of which can fight or defend themselves. Swell! Use the trap door key to enter Reeking Cave and leave the Thalmor Embassy behind for good.

Your inept, temporary followers will try to kill the troll waiting in the cave. This will most likely lead to their death, so try to run ahead and take care of it if you want them to survive.

Notable items in Reeking Cave include the Illusion Skill book Before the Ages of Man and an Unusual Gem, which is one of twenty collectibles needed for No Stone Unturned.

Once you've exited the cave, your followers will all disperse and go their separate ways, so you can head back to Riverwood and inform Delphine of what you learned, as well as grab the rest of your equipment. Telling her the Thalmor want Esbern shocks her, as Esbern is a former Blade living in hiding in Riften. This will be your next destination in the journey, but this marks the completion of Diplomatic Immunity. A Cornered Rat will start right after. A Dragonborn's work never ends!