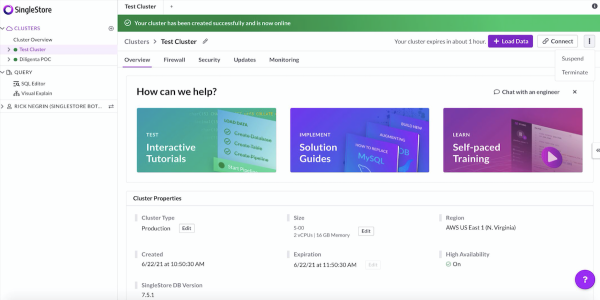 Universal Storage adds multicolumn key support to a database that automatically recognizes the format that data needs to be stored in as it is loaded into the database, said SingleStore CEO Raj Verma. At the same time, SingleStore is also adding support for a point-in-time-recovery (PITR) capability that makes it easier to recover data in the event of, for example, a ransomware attack.

SingleStore, formerly known as MemSQL, stores data across three tiers of storage, starting with memory alongside local hard disks and object-level storage, said Verma. Originally, the database created by SingleStore was designed to run in-memory on the assumption the cost of memory would decline. When that price decline failed to materialize as expected, the database was rearchitected to provide access to a global storage system that spans multiple tiers, which Verma said led to the company being rechristened.

Integrating transactions and analytics within a single database is not a new idea. That capability, referred to as translytics, has been around on platforms such as mainframes for decades. However, as digital business transformation initiatives progress, many more organizations now need to analyze data in near real time at the moment a transaction is being recorded in order to inform a wide range of other processes that span everything from customer support to replenishing supply chains.

The challenge organizations are trying to navigate is that most transaction-oriented and analytics applications were created by separate development teams that each selected a separate database platform. Over time, an enterprise IT organization on average now finds itself managing six or more different types of databases, Verma said. Each database requires a dedicated team to manage it, which he added only serves to increase the total cost of IT. “There’s a lot of database sprawl,” he said. “Cost has become problematic.”

More than half of those surveyed said that hiring and retaining IT professionals to manage their databases is the biggest database-related challenge their organizations face. Not surprisingly, more than a third said that they plan to replace their current database solution sometime this year.

It’s not clear to what degree IT organizations will move to rationalize the number of databases they need to support to reduce costs versus draw a line in the proverbial sand for new applications going forward. Reformatting applications is a major endeavor that many internal IT teams would rather avoid. However, it’s clear that not every application needs to achieve a level of performance that would justify the need for a dedicated database that requires its own database administrator to manage, secure and update. The challenge, as always, is finding a way to reducing the number of databases required without materially impacting application latency.