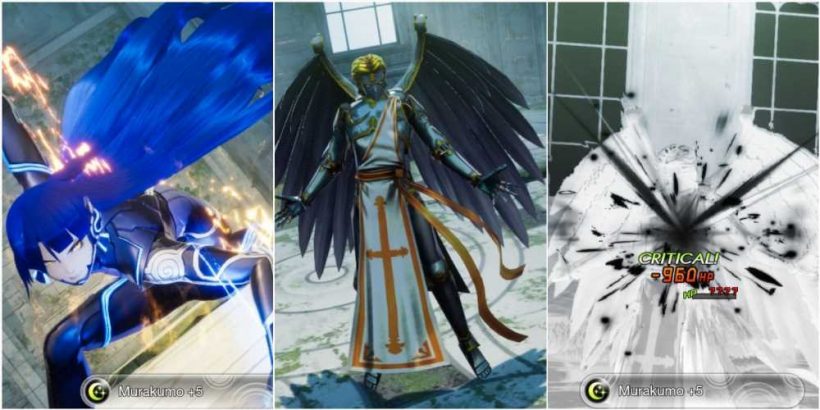 Shin Megami Tensei 5 has its fair share of strong bosses, but Metatron is the boss who guards the domain of the baddest baddies around. He may just be a glorified bouncer, but he got his position by being the best darn bouncer in Da’at.

Like all the late-game bosses, Metatron is not to be taken lightly, and his impressive set of stats, skills, and resistances paint quite the picture. As always, preparation will be key, and grinding will not be required. 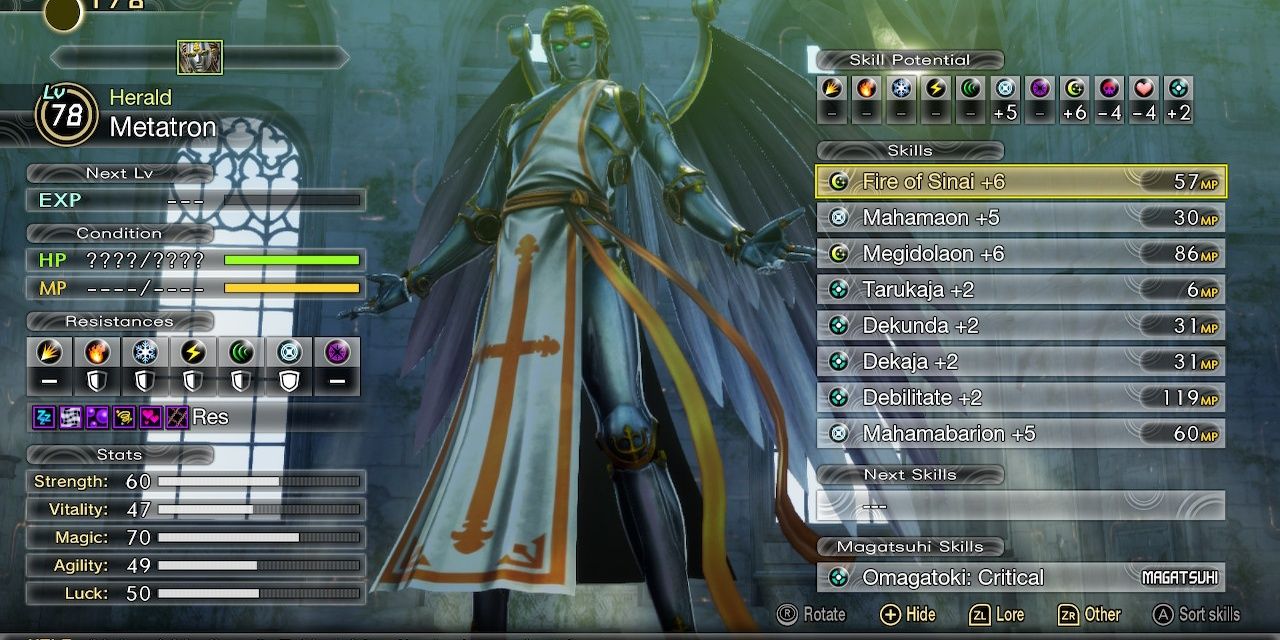 Metatron is one of the defenders of the Throne of Creation – the place in which the Creator, well, created the current world. As is to be expected, Metatron is blessed with Potentials in Light and Almighty, with both being disturbingly high.

This is then complemented by a huge magic stat of 70, and a respectable strength stat of 60. With stats like these, Metatron is in an ideal position to cause all manner of issues.

Metatron can be tricky to deal with. HIs access to AOE Almighty damage is nothing to scoff at, as there is no defense against it. He can buff his stats, remove and apply debuffs, strip buffs, and is an all-around pain in the butt.

Fire Of Sinai is Metatron’s unique attack, and it can do serious damage if Metatron high rolls the random hits. This attack can cripple the party if you are unlucky. The only counterplay here is to lower his accuracy or increase your evasion. This won’t do much, however, since Dekaja and Dekunda exist in his kit. Take the hit and hope it doesn’t hit too hard.

Mahamaon is the reason you want to take demons who are straight-up immune to Light damage. Mahamaon is a pretty devastating attack if it lands, but unlike Almighty attacks, you can easily avoid it with the right party. When Metatron uses Mahamaon, you are going to strip his turns. It’s as simple as that.

Megidolaon is Metatron’s most dangerous attack by far. Severe Almighty damage, with his stats and Potentials, is nothing to scoff at. This attack will land, and when it does, you are not going to have a good time. Demons with Enduring Soul or high Vitality stats will help keep them alive. Having a healer on standby will help too.

Tarukaja needs to be removed the moment it’s cast. Metatron already deals freakishly high, unavoidable damage – you don’t want that damage to scale even higher. You will want demons with Dekaja and trip this buff as a priority. Even one cast is too many.

Dekunda and Dekaja are the reason you don’t want to rely on buffs or debuffs. Your party-wide buffs are expensive to cast, and they are just going to be stripped the following turn, so make sure you cast them at the start of your turn to gain the most benefits. If you do use buffs, then this will drain one of Metatron's turns, which isn’t a bad thing.

Debilitate is truly crippling. It reduces all of your stats, which is not the place you want to be in. Metatron is someone you want to kill as quickly as possible, and if you are burning turns because your attacks are missing or dealing less damage, then you are going to have a rough time. Dekunda is the best way to counteract this.

Mahamabarion is Metatron's Magatsuhi attack. This attack is devastating, but since we are prepared for it, it will never do damage. Like all Magatsuhi attacks, it ends up being a free round for you.

First things first, Metatron has no weaknesses. This is a big deal since you won’t be generating many bonus turns. This is a noticeable hit to your offensive and support capabilities.

Topping it all off, Metatron is resistant to Fire, Ice, Electric, and Force, whilst being immune to Light. This leaves only Physical, Dark, and Almighty as avenues for attack. 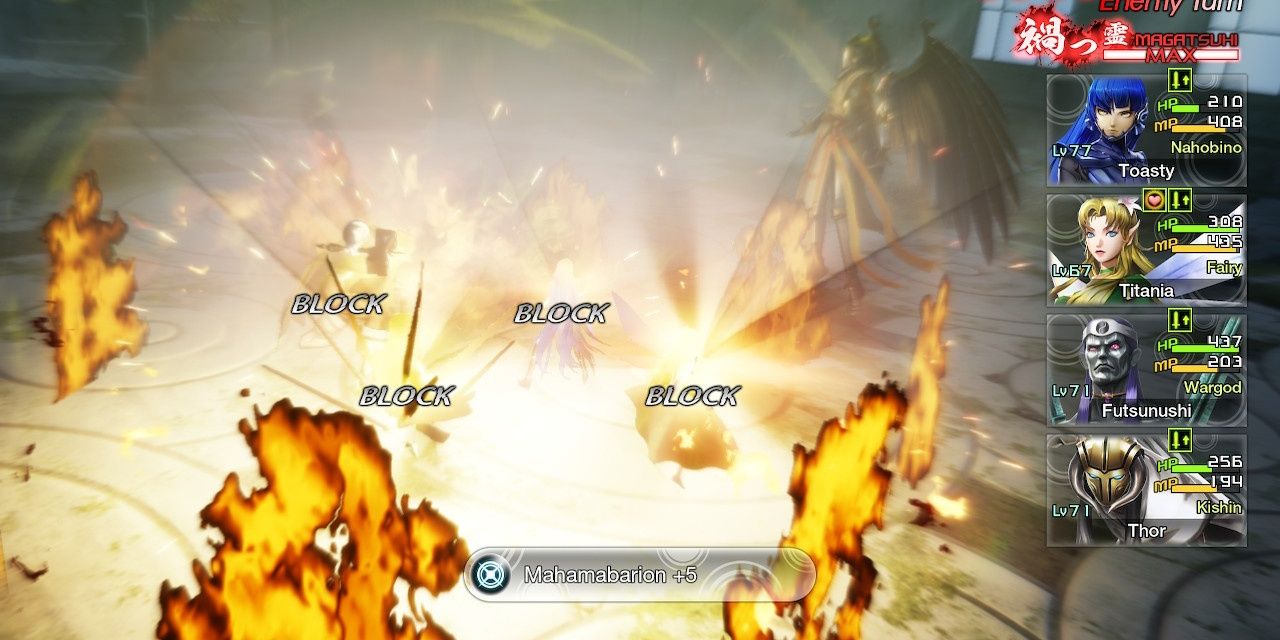 Metatron is a pain because he can just flat-out ignore our defenses with half of his offensive kit. You can’t plan for this, you just need to suck it up. We can plan for his Light-based attacks, however, which means we want every demon in our party to have, at a minimum, resistance to Light.

Additionally, Physical attacks are the way to go in this fight, as they are already scaling out of control at this point, and, well, not much else works against Metatron. Support demons will be required to heal/buff/debuff.

Futsunushi is an absolute beast. He comes in with amazing Potentials in Physical, a fantastic standard kit that is rocking Catastrophe and Physical Pleroma, and resistances to die for. Futsunushi is immune to Light damage, which means Metatron is going to struggle to deal with him.

Every time Metatron casts a Light spell, Futsunushi is going to drain two turns from his action pool. He’s practically a must-take for this fight.

Like Futsunushi, Odin is a monster. With an even higher statline and Potentials to match, Odin can punch holes through Metatron every single turn. His unique attack, Gungnir, is devastating, and you can make it even more so with things like Charge or Critical Aura. The only thing missing from Odin’s kit is Physical Pleroma and maybe Murderous Glee, Both of these will drastically increase his damage output.

The final reason to take Odin is because of his Light block. Metatron simply won’t be able to harm Odin with half of his kit, and if he tries, he will lose turns.

The only downside to Odin is that he is a Special Fusion. This can be a pain to pull off since some of his components are quest rewards. Going through and picking him up is well worth the investment, however.

Another Physical powerhouse, although not on the same level as Futsunushi or Odin. Thor is the demon you take if you can’t bring Odin. He is Odin-lite, with his stats, kit, and Potentials reflecting that. Thor is also not blocking Light, he is merely resisting it.

All that being said, Thor is a great pick. He is easy to summon, his damage is great, and all he needs is Physical Pleroma to pull his weight. You could also consider something like Catastrophe to give him a more reliable attack. He is a great substitute pick in case your beefier demons go down.

Kali is another great Physical demon you can bring along to this fight. She has great Potentials, a high Strength stat, and a base kit that needs only Physical Pleroma to sing. She is resistant to Light which makes her an ideal pick, and having her around to sub in if Odin or Futusunushi go down, is not a bad idea.

Mara is an all-around great demon. He just so happens to be pretty good in this fight too. High Potentials in Physical, a great statline, and native access to Charge, Enduring Soul, and Hell Thrust. As always, Physical Pleroma is a great skill to transfer over.

Mara is also resistant to Light and has a high Vitality stat, making him very handy in a scrap.

Lakshmi is the support demon of choice. This is partially down to her immunity to Light damage, making her very hard to shift. She also has access to Mediarahan, which is an AOE full heal – very nice indeed.

If you are playing the buff game, then Lakshmi also comes with Luster Candy which buffs every stat your party has for three turns. You will want her positioned at the front of your lineup if you want to make the most of this skill.

The only downside to Lakshmi is the cost of her best skills – both of which come in at over 100 mana. Packing Chakra Pots or giving her access to Spirit Drain might take the edge off. You could also bring cheaper spells, like Media, if you don’t want to burn through your mana pool when healing. It would also be wise to bring Dekunda and Dekaja. 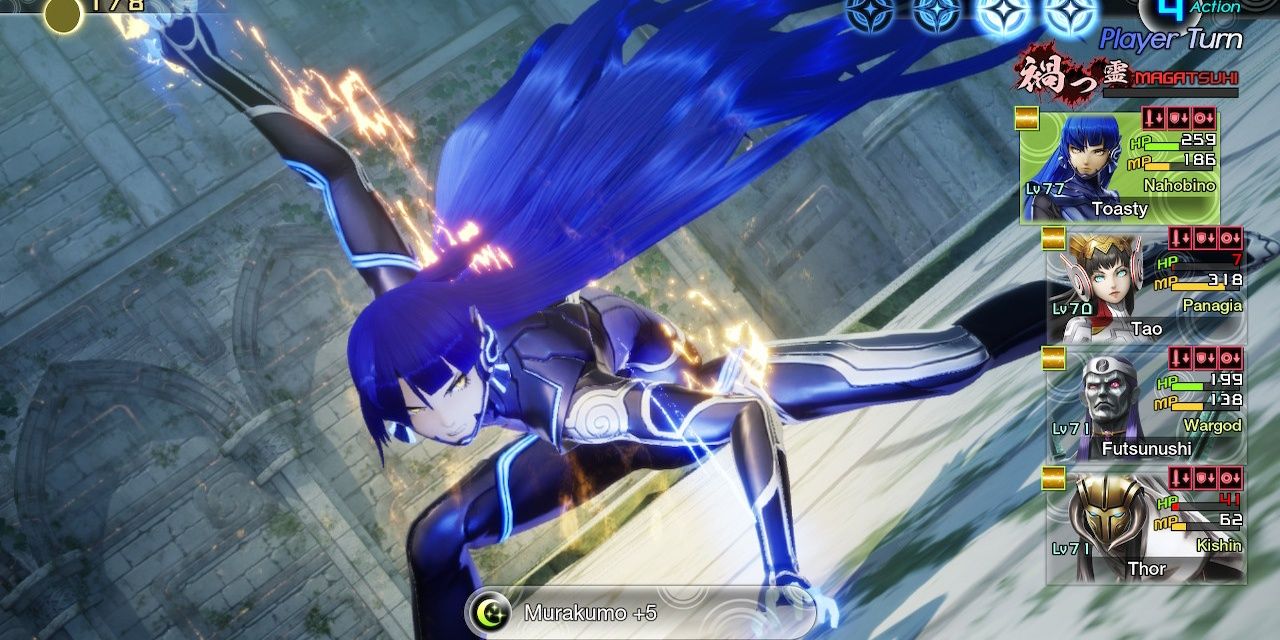 Nahobino should focus on gaining Light immunity. This will help more than any other resistance and will prevent Metatron from being able to damage Nahobino a lot of the time.

For offense, you want to fuse with Aogami Type-0 and use Murakumo. This is your strongest Almighty attack, and it only gets stronger when you land a Critical. Consider bringing Murderous Glee and Almighty Pleroma to increase your damage further.

A magic-based Nahobino is going to struggle. This is partially down to Metatrons resistances, but mostly down to bad scaling. Dark magic would be the way to go – maybe consider bringing Dekaja and Dekunda too since your damage isn’t going to be all that great comparatively.

Kannabi Veil should be taken too since this will increase your party's durability and take the edge off of Metatron’s Almighty attacks.

If you took a party consisting of Lakshmi, Odin, Futsunushi, and a Light immune Nahobino, you won’t need to buy any Dampers – your party is good to go. If not, then bring three and throw them out when Metatron gathers Magatsuhi. 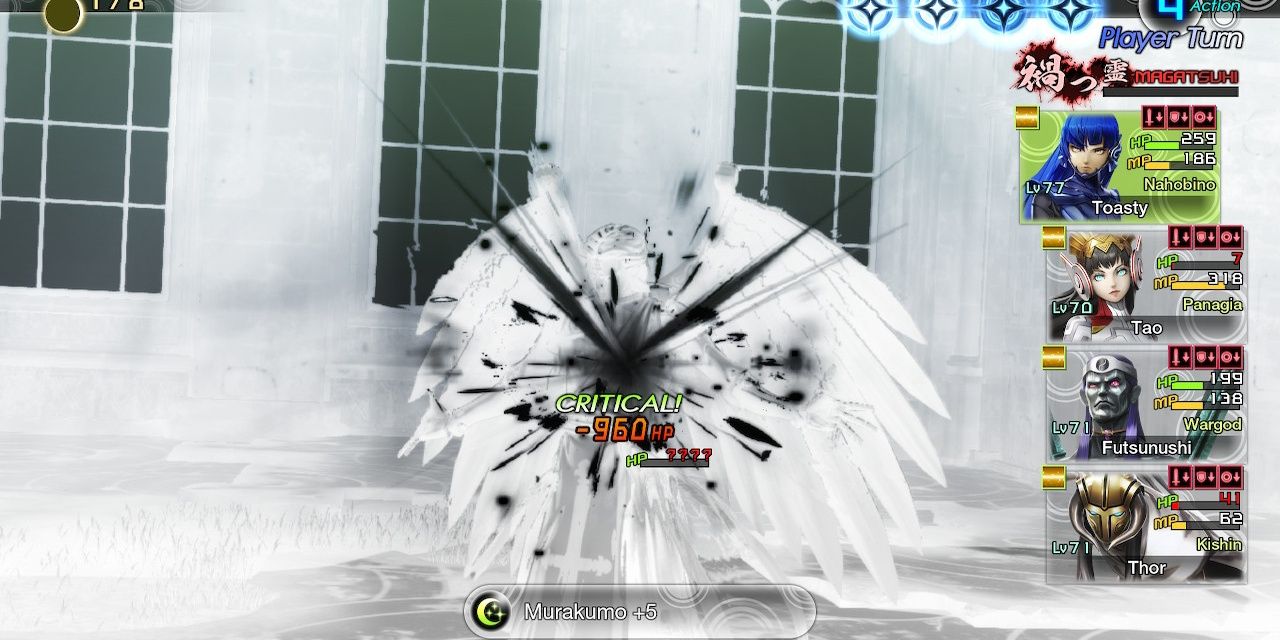 In either case, the general plan is to deal lots of damage, whilst keeping your health as high as possible. Using Charge, Donum Gladi, and Luster Candy will help increase your damage, and in the case of Luster Candy, force Metatron to waste a turn removing it.

Make sure to bring backup demons just in case Metatron manages to punch a hole through one of your front liners. Failing that, revival items work too.

As is always the case, preparation is the first step to victory. Providing you went in with the right party, it should go smoothly. Once Metatron is down, you are a stone's throw away from finishing the game. The Throne Of Creation awaits.