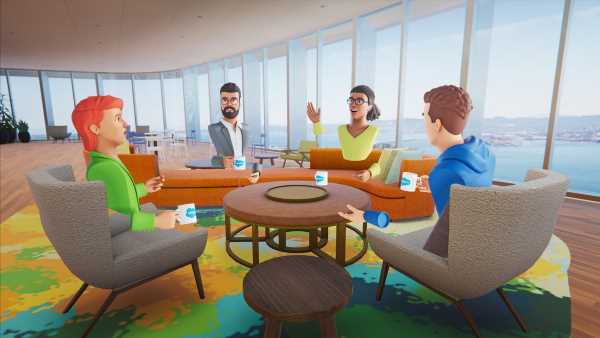 GamesBeat Summit 2022 returns with its largest event for leaders in gaming on April 26-28th. Reserve your spot here!

Roasting marshmallows around a firepit: Not necessarily the most conducive scenario for serious business discussions.

But that’s exactly what Salesforce has experienced with its customers when using the Glue Corporation virtual collaboration platform. Attendees of the software giant’s virtual expos and meetings have gathered in woodsy, wildflower-blooming environs to discuss customer relationship management (CRM) software, use cases, and strategy – sometimes when relaxedly toasting the central ingredient for s’mores over a campfire.

“This is one of the most popular places,” Nick Botter, chief innovation officer and retail lead for northern Europe for Salesforce said during a recent demo of the virtual environment for VentureBeat. “People love this, they can sit here in this beautiful natural environment, put their feet up, roast marshmallows and have quite a relaxed discussion.”

Not long before the onset of COVID-19, many companies including Salesforce were focused on cultivating engaging, in-person experiences at their various global locations and events.

Now just the fact that we use the term “in-person experiences” indicates how much the world has changed in such a short time. To adapt, Salesforce – which has commanded a global physical presence with its giant office towers and expos drawing attendees in the tens of thousands – is leading the charge in its adoption of VR and AR tools.

Over the last year, the CRM leader has implemented virtual collaborative tools developed by Finland company Glue Corporation. These create “true presence” with spatial audio and customizable, 3D avatars that mimic the gestures and movements of their users while sharing media, notes and presentations both live and asynchronously.

When COVID hit and remote work became the norm, “it was very difficult to have a really good group discussion – our brain is just not wired to look into a camera the whole time,” said Botter. “We had a vision to build these immersive environments.”

The use of AR and VR has been growing exponentially in recent years, and that trend is only expected to continue: According to Technavio, the AR/VR market size will be $162.71 billion by 2025, representing a 46% compound annual growth rate (CAGR) since 2020. Furthermore, Superdata says that the enterprise sector will generate more than 70% of the overall AR/VR revenue by the end of 2022.

Glue, which was founded in 2016 and is supported by $8 million in investments from Maki.vc, Reaktor Innovations, Tesi, Braigel Brothers, Foobar.vc and angels, is helping fuel this trend with its remote presence technology. Competing with the likes of The Wild, Party.Space, Yullo, Breakroom, and Facebook Horizons, the company’s platform combines immersive 3-D graphics, VR and cloud computing technology to allow companies to “maximize their collaboration potential,” said CEO Jussi Havu.

Whereas organizations used to spend more than $1.3 trillion a year on business travel, “Now they are faced with the remote engagement pain points of ‘Can you hear me now?’ and ‘Oh sorry, you go first…ok, I can go first,’” said Havu. “Dispersed teams are burdened by ‘Zoom fatigue.’”

“The way we work has fundamentally changed,” said Havu. “Remote is the new norm. Our social interactions are becoming predominantly virtual. This is also impacting the way we work and do business.”

Testing the power of Glue

The company today counts among its customers Deutsche Telekom, Axel Springer, and Salesforce – the latter choosing its platform, Botter said, because of its capabilities with spatial audio, which mimics real multi-dimensional sound.

As Havu explained, Glue offers about a dozen different templates, but users can create custom platforms, as well. Salesforce, for its part, has digitally replicated its San Francisco tower and Dreamforce expo. It is also in the process of building an environment that provides a more dynamic, customer-tailored demo space. For example, it could mimic a manufacturing plant with assembly lines, or an oil platform with working rigs.

These platforms provide venues for larger creative workshops and smaller roundtables, and are used in a mix of in-person meetings and collaborations via Zoom, Google Hangouts and Slack for groups of roughly five to 40 people.

“We’ve been able to gather all these people, create moments for smaller groups, bigger groups, one-on-one interactions,” Botter said. “They really have the feeling that they are connected with each other, but without the travel.”

In the Dreamforce expo platform, for instance, customers start out in “Dreamforce Park,” then traverse along a stone walkway through groves of pine trees and patches of wildflowers surrounded with fluttering butterflies.

Botter explained of the backdrop: “The idea is that we came out of the pandemic into new beginnings, sprouting new flowers.”

Along the way, user pass billboards with automatically uploaded, industry-relevant customer stories, watch videos, converse in “mindfulness corners,” and request more information by tapping big red buttons. They can virtually high-five each other, and avatars gesture along with their movements (either as they gesticulate or shift their gaze to a group’s dominant speaker).

Meanwhile, the Salesforce tower platform features a seating area in a pavilion with floor-to-ceiling windows offering sweeping views of San Francisco Bay. Users can even pour themselves virtual cups of coffee before gathering in a presentation area, settling into casual clusters of tables and chairs, or gazing out the windows at iconic city landmarks including Alcatraz and the Golden Gate bridge. Botter himself, who was once based in the Golden City but now works out of Amsterdam, noted that he sometimes uses the platform for scenic purposes: “I miss San Fran, sometimes I go and look at the city that I miss.”

Salesforce relied heavily on its real estate and marketing departments in designing the spaces, and the physical limitations (or lack thereof) took some getting used to. For instance, the ceiling could be raised in the Salesforce tower without concerns for heightened earthquake impact.

“You can really play with the environments,” Botter said.

However, he stressed: “When we started doing this, we didn’t want to build a gimmick. We thought it should be fun, but that it should also be useful and bring value to us and our customers.”

To that end, users can draw on Whiteboards and take advantage of tools including screen shares, giant post-it notes and freehand 3-D drawings. These materials can all remain in the platform for as long as users need them or be exported via web user interface to various supported file formats. The platform will also eventually include automatic note-taking capabilities, Havu said.

“The future will be about these systems being smarter and understanding what is happening in meetings and trainings, making participants more productive,” he said.

How many people can be involved and what can be done with the technology will be dependent upon how fast hardware becomes more affordable and scalable, he added. Enterprise is also still learning what can be done with VR and AR and the implications when it comes to spatial anchors and retention – which has shown to be higher compared to reading a book, watching a video, or attending a lecture.

But overall, Havu emphasized, “We’re not expecting this to remove the need for other existing communication tools. They all have certain use cases and purposes. This will just be one tool in an information user’s toolbox.”