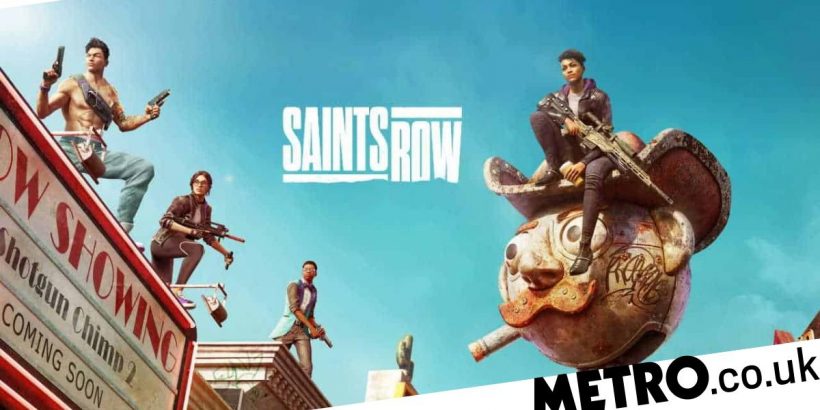 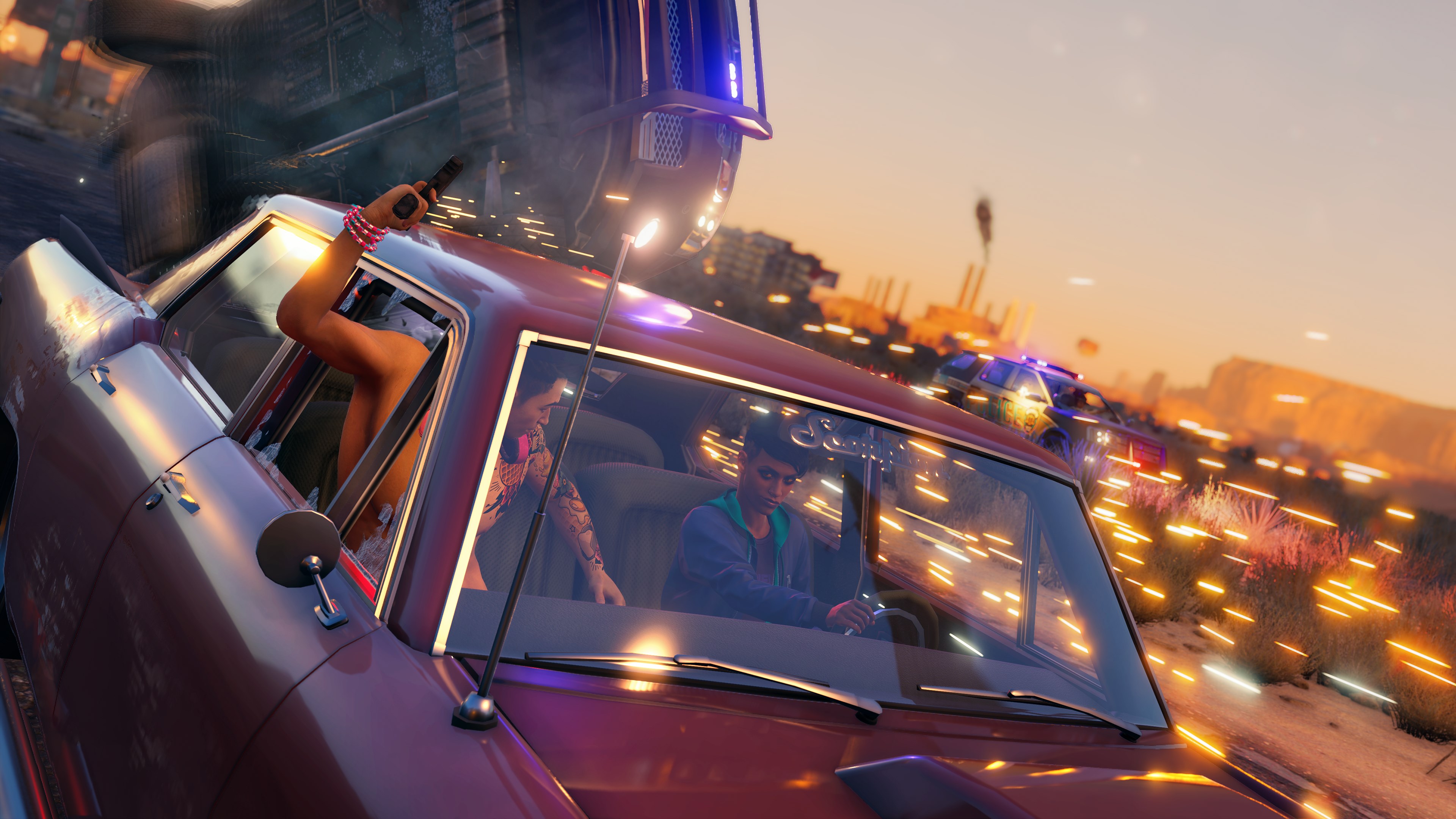 The already controversial reboot of Saints Row tries to take on GTA at its own game, but it has more in common with Goat Simulator…

There are many words that come to mind when playing the new Saints Row: shallow, unsophisticated, old-fashioned, low-tech, clumsy, charmless… The reboot was decried by ‘fans’ as soon as it was announced, for a variety of vaguely expressed complaints centring on its diverse new cast of characters and complaints that the game had drifted too far from the relatively serious gangster simulator that Saints Row 2 is perceived to be.

The new characters are unappealing, but that’s for the simple reason that they’re so blandly written and so pathetically desperate to appear cool and trendy. And while viewing Saints Row 2 as anything but a low rent Grand Theft Auto clone requires some very thick rose-tinted glasses it is odd that this reboot drops the few elements that did make it stand out, in terms of running a criminal empire.

It is easy to understand why developer Volition would want to reboot Saints Row, as the last game, which featured a full musical number set in Hell, had long since given up on any sense of realism. This reboot dials things back down to somewhere between Saints Row 2 and 3 on the absurd-o-scale, which, like most compromises, is unlikely to please anyone – a phrase that happens to describe the new Saints Row in general.

There are many strange design decisions in Saints Row but one of the oddest is that it doesn’t really have a story. You and your three roommates start off as low-level gang members, before deciding to start their own gang. After they do that that though there’s no real plot, just a series of missions that involve you taking down each of your rivals. There’s no throughline at all and the whole story campaign is over incredibly quickly for an open world game – ignore all the side missions and you could easily complete it in 12 hours or less.

The strangest thing about the story though is that right at the end someone suddenly realises there’s meant to be a narrative and a major betrayal finally adds something interesting to the plot. The betrayal has absolutely no foreshadowing, and all the characters are still completely unappealing, but it does feature a one-off setting that’s the one and only time the game attempts to be anything but Grand Theft Auto on a vastly smaller budget.

The only other interesting thing about the storytelling is that, unexpectedly, one of the optional female voices for your customisable main character is English. There’s no male equivalent but the entire script is subtly different, filled with British colloquialisms (this may be the first time we’ve ever heard the word ‘petrol’ uttered in a video game) and an appreciably sardonic tone from the actress.

The reason Saints Row 2 is so fondly remembered is because, when compared to contemporary GTA 4, it had far superior action and driving. It wasn’t exceptional, by normal action game standards, but it had a base level of mechanical competence that Grand Theft Auto has, bafflingly, always struggled to maintain.

Things have changed since 2008 though and while this new Saints Row has perfectly enjoyable combat it’s very straightforward and shallow, with not so much as a cover system to its name. There’s a reasonable sense of physicality and a good range of weapons but the only truly distinguishing feature is an irritating health system that only recharges when you perform a one-shot kill, that takes time to charge. Since there are no health pick-ups the only other option is to just run away and recharge automatically when not in combat.

The gunplay is competent but it’s nowhere near good enough to support a whole game, especially when the other main action element, the driving, is even more simplistic. There’s a good sense of speed for some of the vehicles but they’re all strangely frictionless, as if trying to simulate a child moving a toy across a tabletop.

The bigger issue though is that, as long as you’re driving, every vehicle, including even motorcycles, acts like a nigh invulnerable tank, as you batter every other vehicle out of the way simply by rear-ending them. This completely removes the need to drive skilfully or pay any real attention to what you’re doing on the road.

There’s also a special sideswipe move, which sees you pinballing buses and trucks across the tarmac, which highlights the game’s tragicomic physics system. It might not be intended as a serious simulation, but Saints Row is also extremely low-tech, with simplistic character models and open world graphics that are far below the quality of the almost decade old GTA 5, let alone Red Dead Redemption 2.

That’s not Volition’s fault – few other developers can command the same size of budget as Rockstar Games – but the physics engine makes Saints Row feel more like Goat Simulator than Grand Theft Auto, since everything in the game feels like it’s made out of cardboard, with no sense of weight to anything.

Cars and people go flying through the air at the slightest provocation and it’s very hard to tell how much of it is on purpose and what’s just a bug. Fire hydrants, for example, shoot cars into the air on a jet of water, in what’s clearly meant to be a fun little detail, but the physics looks so embarrassingly bad it’s mystifying as to why Volition left it in.

On top of this, the artificial intelligence is so dumb it probably still thinks cryptocurrency is a good idea. As you watch it constantly crash into itself, or wander about aimlessly during the middle of a firefight, it quickly eats away at any sense of accomplishment in the game.

This is frustrating because there are elements of the game that work. You get sick of the combat because of the repetitive missions, which quickly turn the game into a stock third person shooter, but things like the wingsuits, and a tank that can pancake other vehicles, are a lot of fun to play around with. There’s also an easily missed side mission that introduces a trio of wackier sci-fi gadgets, that suggest that would have been a much more interesting direction to take the game than this bland middle ground.

Volition certainly don’t seem interested in being a serious, or even semi-serious, gangster simulator as all the managing of your troops happens off screen. There’s a map where you can buy and maintain new side ventures, such as drug running and a repossession firm, but there’s no strategy involved, you just buy the side ventures when you can afford them and they give you access to a new type of side mission.

You can fight groups of nearby gang members, to increase the money you receive from these businesses, but these just come across as random encounters and some of the least interesting content in the game.

Not only have Volition refused to accept that they can’t compete with GTA directly, but they’ve gone out of their way to encourage comparisons with GTA 5 in particular, given the setting here is also a city surrounded by desert wilderness in the American Southwest. Saints Row’s open world hasn’t got an ounce of originality to it and it feels empty and lacking in personality from the very start.

For some, what will save the game is the co-op options, with the whole experience available to play along with a friend or via online matchmaking. That is definitely the best way to play it but, again, large scale co-op games are not the novelty they once were and there’s far more interesting things to play with a friend than Saints Row.

Volition has squandered their opportunity for a reboot on a game that doesn’t move the franchise, or the genre, forward one iota. Especially given the low-tech graphics, the whole game seems like something straight out of the Xbox 360 era, and feels thoroughly old-fashioned in terms of visuals, gameplay, and tone.

You get up to some pretty unpleasant things in Grand Theft Auto, but the games have always been presented as subversive satires, not just childish power fantasises. There’s an argument to be had as to whether that’s just camouflage, to allow you guilt free indulgence in your worst impulses, but in Saints Row the game isn’t so much concerned with being funny as it is with appearing cool.

The script feels very much like an older person trying to be down with the kids, and so you have endless scenes of characters trying to out-flippant each other and constantly joking about how many people they have to murder and how much fun doing crimes is.

It all comes across as very distasteful, as if the developer didn’t really understand the implications of what they were making the characters say and do. Especially as in the next breath they then have them babbling about waffle makers and how much they trust and respect each other as friends.

Saints Row either needed to be a lot more serious or a lot sillier than this. The half-broken compromise they’ve settled on is, as we suggested at the start, unlikely to please anyone. Taking on GTA isn’t impossible but no-one can compete with Rockstar head-on, you’ve got to offer something different, and Saints Row doesn’t do that at all.