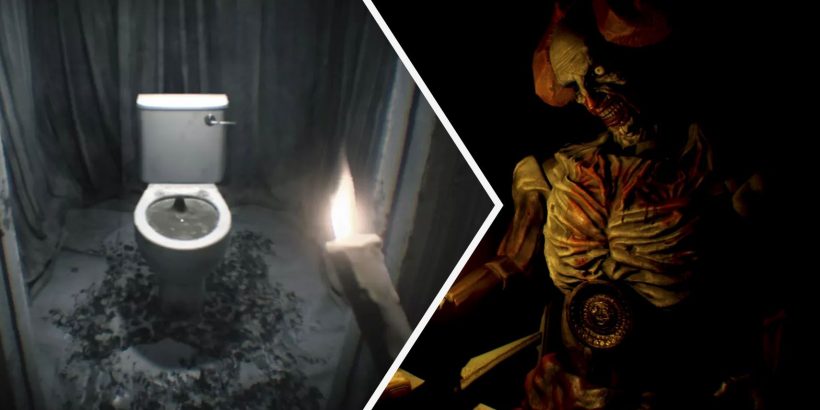 Despite being a survival horror franchise, Resident Evil rarely gets as disturbing as the likes of Silent Hill. On its best day, Resident Evil opts for tension and nefarious atmosphere over unsettling its audience. Or so was the case until Resident Evil 7. A thematic reboot of sorts, Resident EVil 7 brought the series back to its proverbial roots while also amplifying its horror as much as possible.

The Baker family stand out as some of Resident Evil’s most disturbing villains, with Lucas in particular the standout. An actual serial killer (rare by Resident Evil’s standards), Lucas takes deep pride in torturing others with his elaborate traps. This comes to a head when players have to solve the Happy Birthday puzzle for the first time – a sadistic set piece that pushes Resident Evil 7’s horror further than it’s ever gone before.

While Ethan has to go through the Happy Birthday puzzle himself later on, the key to solving it lies in the Happy Birthday VHS Tape. Found in the Main House Attic, the Happy Birthday tape details Clancy’s last moments and gives players the clues they need to keep Ethan alive later. Simply pop the tape into any VHS player and start playing. 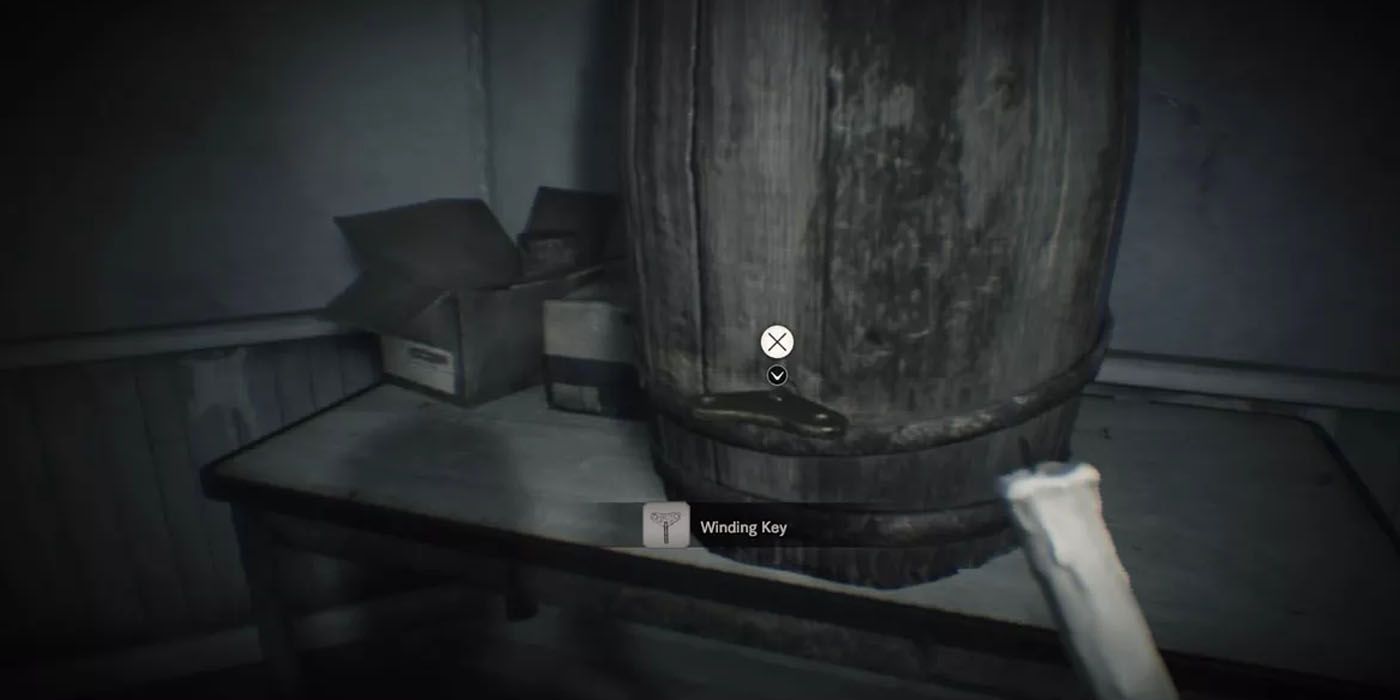 To begin, grab the Candle out of the animatronic clown’s hand. This will be Clancy’s main source of light while dealing with Lucas’ puzzle and an essential utility tool in solving it. Head into the room with the Birthday Cake in it where sprinklers will extinguish the candle and Lucas will explain to Clancy that he has to leave a lit candle on the cake to “win.”

Grab the Winding Key out of the cask, leaking liquid onto the floor. Logic dictates that this is wine, but examining the Winding Key itself reveals the cask is actually filled with oil. Exit the room and go into the kitchen. Turn the stove top on and examine it to relight the Candle. Now that the Candle’s lit, it’s time to explore the rest of the room. 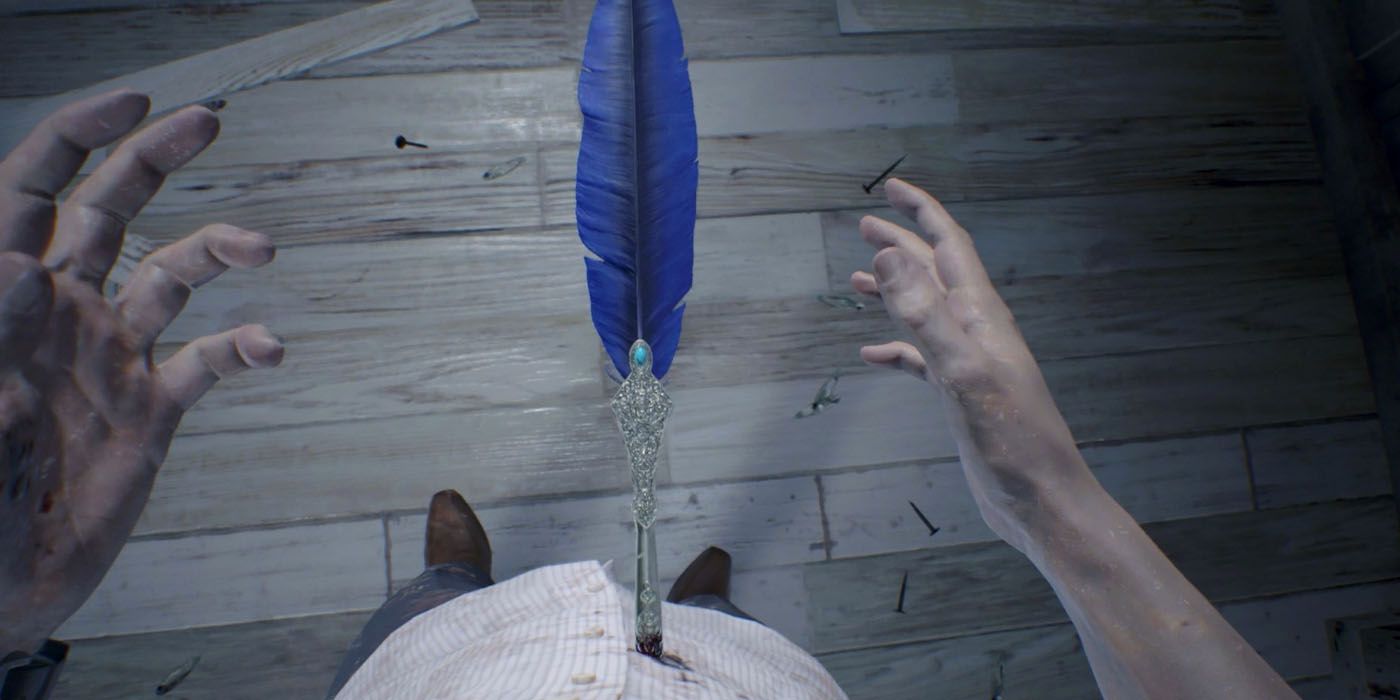 There’s a locked door right by a monitor displaying the Baker Family. Unlike other doors, this one isn’t locked by a key, but instead held together by flammable rope. Burn the rope by using the lit Candle on it and head into a hallway filled with balloons. Clancy can actually pop balloons by walking into them, with a deflated Balloon lying on the floor.

Make note of the door with the 5-character lock on it and leave. Examine the gas pipe on the broken wall to fit the Balloon onto it. As it expands, you’ll notice several spikes prodding out of the Balloon. The Balloon will pop, piercing Clancy’s body with a nail and the Quill Pen. Clancy will rip the Quill Pen out of his side and put it in his inventory. 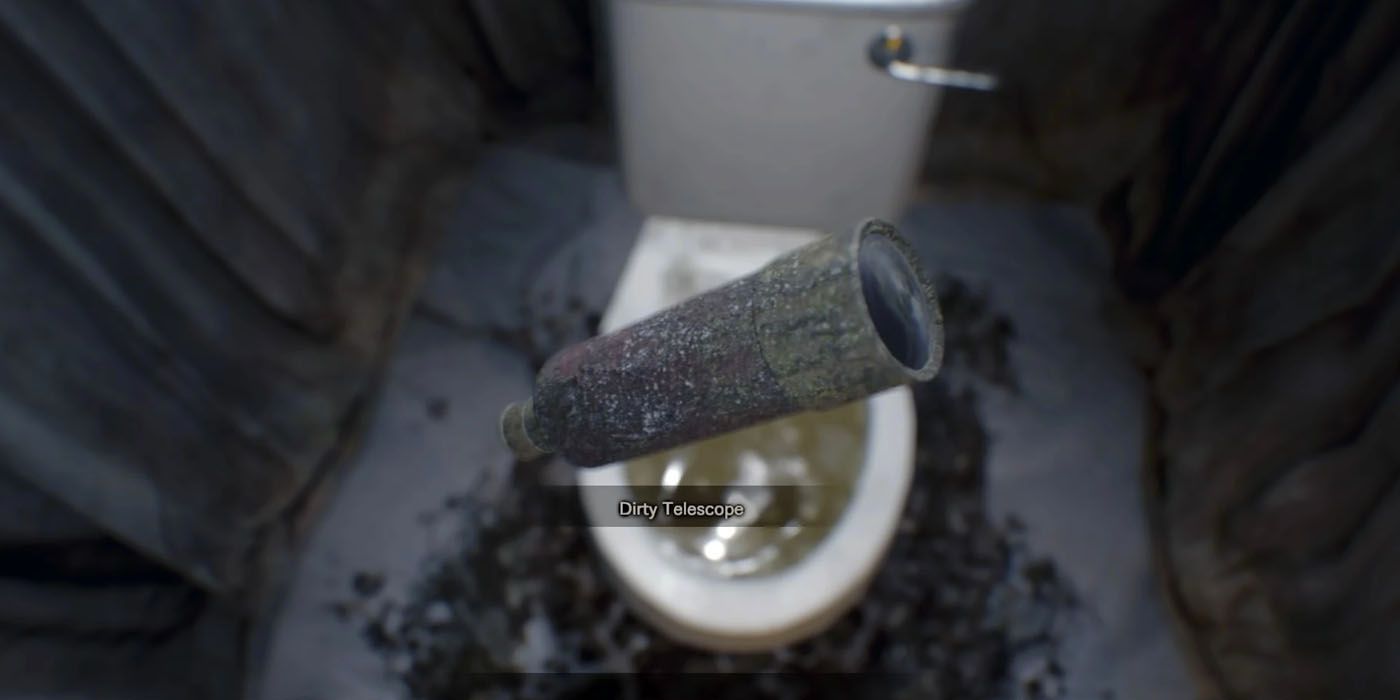 Now go into the bathroom and flush the toilet. Clancy will now need to stick his hand into the toilet to get the Telescope. When used, the Telescope actually displays a new image on the monitor in the puzzle’s main room. Unfortunately, the Telescope is caked in dirt and can’t actually be seen through.

Go back to the cake room and stop underneath the sprinkler. Since they’re motion sensors and not actually heat activated, you can equip the Telescope and stare directly into the sprinklers to clean the lens. With a clean telescope, the monitor will now reveal the password to the lockbox inside the cake room. 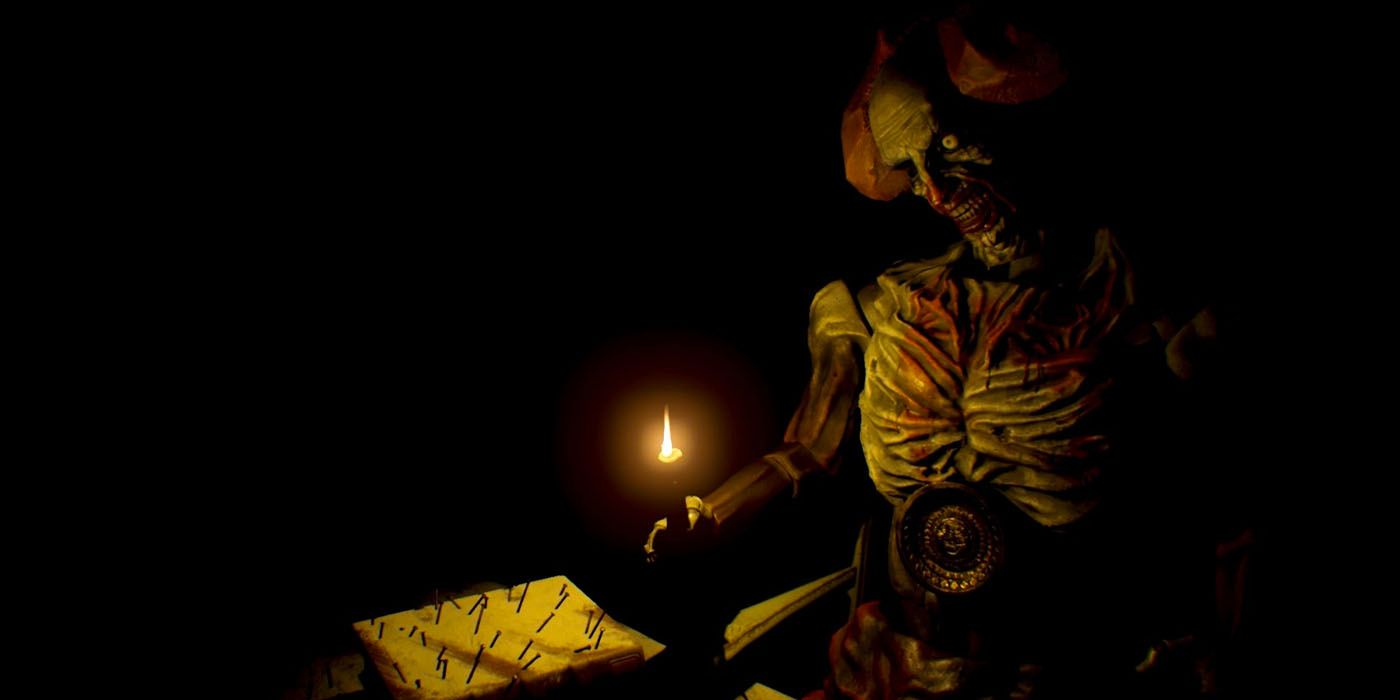 When looked at with the Telescope, the Baker family monitor shows the following symbols from left to right: a child swinging, a crow perched atop a bell, and a fetus. There are the three symbols that unlock the lockbox inside of the cake room. When inputted, Clancy obtains a Straw Doll that can be burned on the stove top.

Once burned, the Straw Doll becomes the Dummy Finger – the final piece needed to start up the animatronic clown. Go examine the clown to put in the Winding Key, Dummy Finger, and Quill Pen. The clown can now be turned on, presumably to write out the password to the 5-character lock in the balloon room. Instead, the clown grabs Clancy’s arm and scars “LOSER” into his flesh. 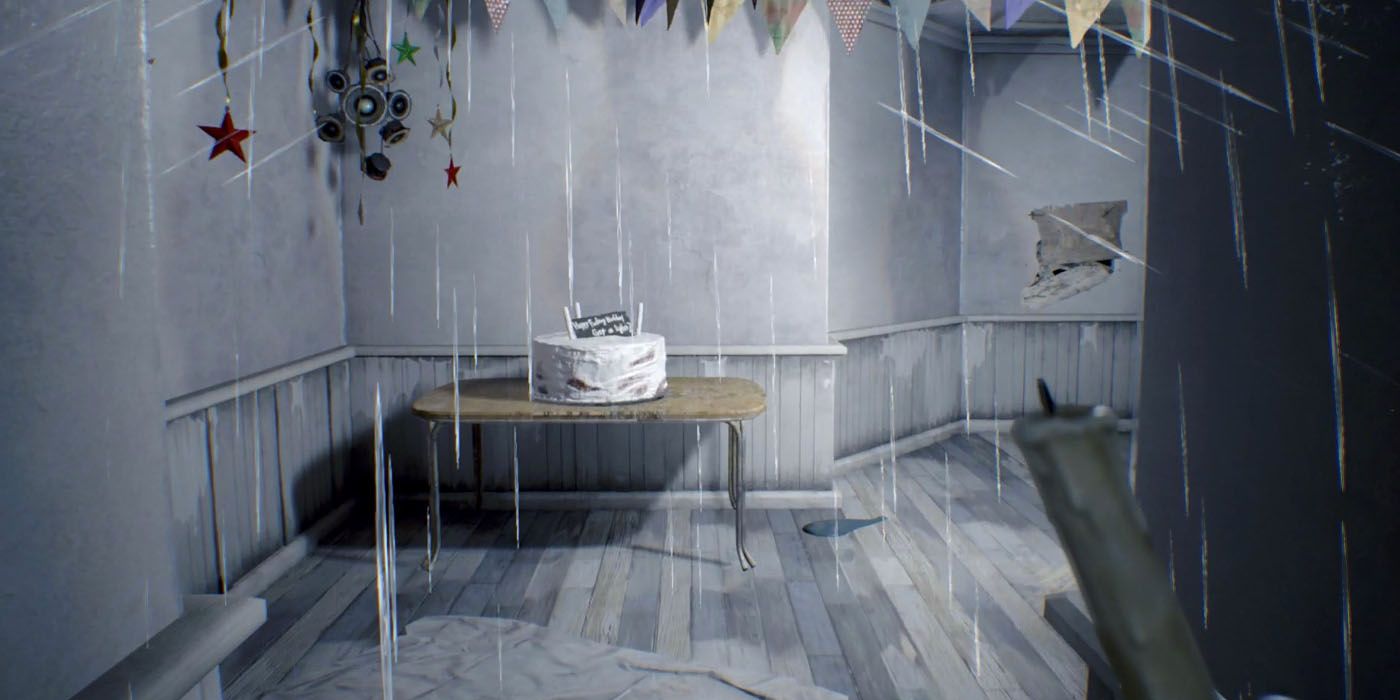 With the password on arm, it’s time to head back to the balloon room. Input “LOSER” into the lock to finally remove it. Head inside the room to grab the Valve, which can be used inside the cake room to turn off the sprinklers. Once the sprinklers are off, go back to the kitchen and relight the Candle one last time.

Clancy can now place the Candle on the cake, sealing his fate. The cake will detonate, igniting the oil inside of the room, and cooking Clancy alive. You’ll remain in control as Clancy dies, but there’s nothing to do other than listen to his screams of terror. It’s genuinely one of the most disturbing things in Resident Evil history.

Next: Resident Evil 7: Everything Different About New Game Plus