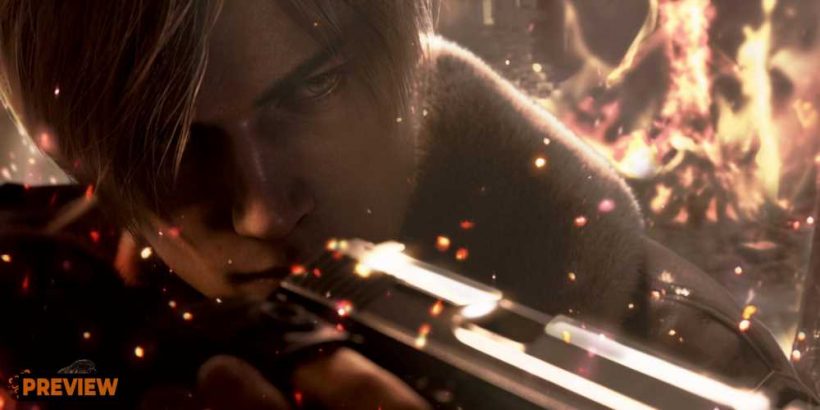 The idea of Resident Evil 4 being remade has always frightened me. It’s longer, more ambitious, and infinitely more batshit than anything that came before. It was Capcom’s attempt at rebranding the series, an experiment that resulted in one of the most influential games of all time, one that is still being drawn from today. Aside from some finicky controls, the original holds up, so the idea of remaking it completely feels like an ill-advised mistake.

It turns out I was a fool, since I’ve already fallen head over heels into a puddle of lingering nostalgia for a remake that not only builds upon what came before, but keenly understands the fragile legacy it is toying with. It can’t just use the RE Engine to make everything prettier while cutting out valuable content, but needs to update the narrative, characters and mechanics to fit seamlessly in the modern landscape, all while preserving what made the game so special. After playing the opening, Resident Evil 4 not only does just that, it evolves the series in ways that not even Village was capable of. This is the next step for the survival horror icon, and the future looks very bright indeed.

While Resident Evil 2 & 3 were often derided for cutting content in spite of their clear brilliance, more focused on turning the survival horror classics into action blockbusters instead of more mediated cauldrons of terror, Resident Evil 4 seems to take its time. This game is so iconic that I can close my eyes and play through it in my head, so I knew this reimagining needed to fundamentally change the foundations if it desired success.

Yet there is also the importance of riding the line, ensuring it changes just enough without making a completely different experience. By taking inspiration from beta iterations of the original game and this new universe Capcom has created with the remakes, Leon Kennedy’s European bender has all the ingredients to achieve perfection. Its first impressions feel like a warm blanket covered in viscera that is shortly going to be set on fire by a bunch of angry farmers. Exactly how I like it, and every single moment is one worth savouring.

The opening is now far darker and slower in its unfolding paranoia. Before Leon left behind his police escorts and immediately stumbled upon a man in a nearby lodge. You ask for help, a fight breaks out and the action escalates from there. Now the first enemy you dispatch is just the beginning. We hurl him into a nearby wall and have no choice but to react, learning that the men we came here with have already been killed in cold blood by hostiles operating on orders that are far removed from the intentions they used to have. We are lost, much like Leon is, and despite having played the original game countless times I had no idea what awaited around the next corner.

I spent several minutes exploring the first room, knocking down shelves and investigating dusty pictures and bloodied furniture to figure out what exactly happened to these people. I push onward, waltzing into neighbouring rooms and down to the basement hoping to find some clue about what exactly is going on. Soon I’m ambushed, and seconds later our hero is diving out of a nearby window with a cheesy catchphrase and a spring in his step. This is Resident Evil 4, but it’s also something entirely new that I never knew I wanted.

Capcom strikes a balance between camp and horror that for such a long time has felt lost, but now it’s back and better than ever. The wolf we once saved to help us in a future boss battle is long dead, its organs hanging over the rusted bear trap that sealed its fate. Wooden shacks that previously sat empty with loot waiting to be pilfered have fallen down altogether, while abandoned trucks covered in leaves are relics of technology the infected have long left behind. It feels like Capcom has taken into account the 18 years that have passed since the original game, not wanting to retrace its steps so much as take the same journey with all the lessons it has learned since. It’s all older and more weathered, but glazed with an aura of familiarity that is akin to walking through a dream you’re trying so desperately to remember. I adore it, and I swear that isn’t just my nostalgia talking.

The approach towards the iconic village set piece is now a smidge longer, populated by fewer enemies and a greater focus on unsettling environmental horror. Resi 4 is far more interested in showing instead of telling, and giving the player freedom to experiment with their surroundings instead of defining the adventure as a linear rollercoaster ride. The act of slicing open crates and barrels to secure loot and using certain equipment is introduced with a deliberate cadence, like I’m learning to use more and more of my arsenal as the situation worsens. It all comes to a head as I reach the village entrance, watching in horror as my comrade is set alight at a central bonfire, his fresh corpse burning to a crisp as the town occupants go about their day like torching an intruder is just another chore on their list of usual tasks.

Usually I’d walk in and wait to be spotted, running around in circles waiting for the bell to toll and I’m granted a brief window of sanctuary. That still happens here, but there is so much more to it. Leon can crouch now, allowing him to sneak around levels and kill enemies in silence instead of alerting the entire area. In theory, you could murder all those in the village without an alarm even going off, and who knows how that will affect the narrative or if I’m trusting in an impossible ultimatum. I snuck up on a random housewife, stabbed her in the neck, and dispatched a few poor souls before I eventually got caught. I rushed into the house, hiding the shotgun and panicked as a chainsaw-wielding monstrosity began tearing the door down. It’s time to lock and load and kill some bitches. It’s like riding a bike again.

The first few minutes are a bit awkward, but soon I’m snapturning and blasting fools in half with a shotgun like I’ve been doing it my entire life. A wider field of view and more considered approach to recoil means that Resident Evil 4 is the best this series has ever felt when it comes to gunplay, while the added versatility afforded to movement and melee combat found in the original are bolted into the modern formula in a way that feels so damn natural. Leon’s knife is also a key mechanic, coming with a durability metre that is whittled down when you use it to kill an enemy who grabs you or defend against a potentially fatal chainsaw strike. A reactive press of the shoulder button when attacked also performs a parry, opening foes up to a lethal attack or a window of opportunity for Leon to escape.

The village was once a static playground, but now it seems like I could play through this opening countless times and still find new ways for it all to unfold. Run down a certain path while being chased and enemies might chainsaw down entire buildings to trap you inside, or shooting a torch above a farm animal will set the poor thing on fire as it rushes through the village killing everything it stumbles across. I even pissed off a few chickens, and they killed me before the villagers even had a chance.

Expectations are constantly subverted too, as old tactics I used to employ were thrown back in my face as platforms crumbled beneath me or foes behaved in ways that went against decades of honed muscle memory. Grates across the village also seem to link to an underground network of sorts, hinting that the wider game might be connected in a way that is almost semi-open world, or revisiting past locations will be folded into a campaign that is much longer than any reboot that’s come before. Remakes are best when they not only seek to adapt the original, but reinvent it in ways that are impossible to predict, and Resident Evil 4 understands that mantra perfectly.

Eventually the bell finally tolled, and I was left alone in relative safety as the surrounding villagers marched towards a greater purpose. Leon smirks, asking if everyone has gone to bingo as my preview comes to an end, and I’m left to pick my jaw up off the floor. I’m left with even more questions about what the rest of the game will look like, but the confident execution and assured tone of everything I’ve played shows Capcom at the very top of its game.