Indie video game studio Puny Human recently announced its puzzle-solving bullet-hell SHMUP Galacide has been released for consoles. PlayStation 4, Xbox One, and Nintendo Switch gamers can now purchase Galacide and experience the intense side-scrolling gameplay action of blasting their way through an alien armada before it reaches and destroys Earth. It’s now your turn to save the galaxy bit by bit.

The announcement came via the Galacide Console Release trailer on Puny Human’s YouTube channel, and by an accompanying official press release. The announcement video also serves as an intro to Galacide for those who may be hearing about the game for the first time.

In Galacide, you and up to three others can team up in local or online co-op play “to deke, dodge, and destroy enemy spacecraft” constantly on the attack. These enemies are out in front of the Bitwall, an ever-advancing wall of death that is slowly headed directly towards Earth. As you destroy the enemy space creatures, they drop pieces of colored scrap that you and your team need to collect and use against the Bitwall, as they are the only things that seem capable of destroying it. The more scrap you collect, the faster you can destroy the Bitwall.

Enemy creatures are not the only things you’ll have to contend with in Galacide. As you fly-scroll through space, you’ll encounter multiple varieties of match-three puzzles that you’ll need to quickly solve in order to stay alive and advance further. Thankfully, you’ll not have to rely solely on your quick thinking and quick reaction skills.

Galacide features four ships for you to pilot toward the Bitwall, and each ship has its own unique abilities. The available ships to choose from include “the “everyman’s” Mining Ship, the “brick sh**house” Freighter, the “kitted-out for combat” Military Ship, or the speedy and experimental Phase Ship”. Pick out the ship that best suits your playstyle and take it into battle to see how well you do. 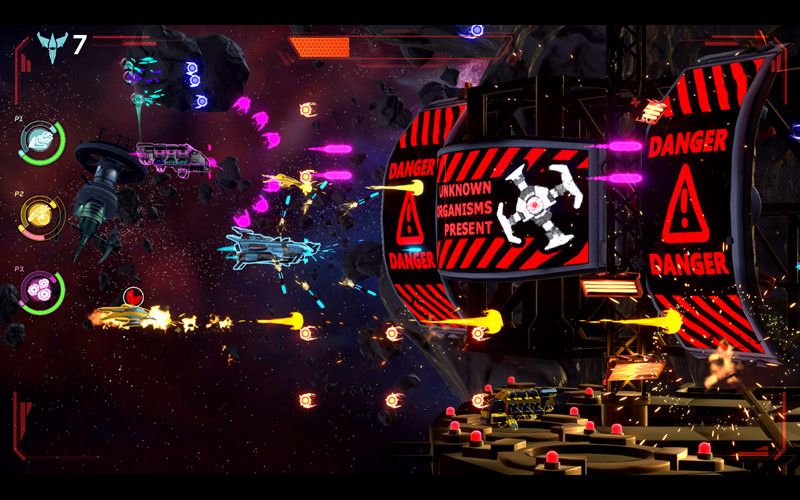 Galacide also features a variety of different game modes other than the primary Campaign mode. Puzzle Pay mode allows you to do away with the constant barrage of enemy fire so you can focus on solving the increasingly difficult puzzle scenarios. And if you’re really in the mood for some digital mayhem, Endless Mode will throw a relentless onslaught of enemy creatures at you as a test of your pure gaming reflexes just to see how long you’ll last.

Galacide for consoles can be bought on the Playstation 4, Xbox One, and Nintendo Switch webstores. Galacide is also available on Steam for PC gamers.