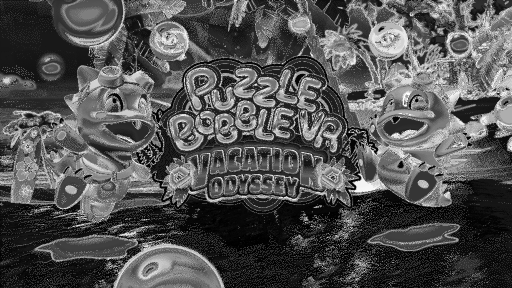 Always afford the benefit of the doubt. That’s what Tetris Effect taught me. Because as silly as ‘Tetris… in VR’ sounds on paper, its developers found clever ways to transcend the classic and deliver something meaningful.

No, that’s not a bad thing – it’s quite likable, even. But it’s also not exactly the most exciting or necessary of VR translations. Developer Survios has done a dutiful job reimagining the classic color-matching gameplay — fire bobbles into groups of other bobbles to burst the corresponding colors — for the medium. But, if I had to choose, I’d go back to the more accessible original format in a heartbeat.

What is it?: The color-matching classic gets a VR version with a 100+ level campaign and multiplayer mode.
Platforms: Quest
Release Date: May 20th
Price: $24.99

In fairness, there are some great ideas fleshed out across a full game here; there are 100 levels in Puzzle Bobble’s story campaign and it’ll take even a skilled player over five hours to fight through them. Rather than aiming from side to side in 2D, you’re now armed with a bobble cannon that works like a slingshot, getting you to first load a bobble in, then pull back on a wire to aim and send it flying. The most complex new layer is that, when your bobble hits a cluster, it will send it spinning and give you new angles to shoot at. With careful planning, this can work to your advantage, but it’s also often likely to obscure the next shot you were hoping to make.

New concepts and abilities also mix things up – eventually, clusters start moving and rotating, and new ways to win levels provide a hint of variety. Abilities have fun ideas, like eating a pepper to light a bomb with fire breath and then clearing a whole group of bobbles with a single shot. That said they’re costly and you earn cash at an absolute crawl via level progression and, uh, shooting pelicans. The game doesn’t exactly encourage their use as, if you fail a mission after using one, it’ll still be gone for good and you’ll need to play more to earn them back.

There’s just enough here to keep Puzzle Bobble VR engaging, then. I’d be lying if I didn’t say I enjoyed blasting through the campaign and there’s a nice flow of levels you’ll breeze past mixed in with trickier challenges that will require multiple attempts. It looks great, too, with vibrant worlds and a fantastic soundtrack.

Not everything works, though. While aiming in VR does give you more control, it also makes the experience much more finicky; I lost count of the number of times I aimed up a great shot, let go of the trigger, and then the slightest movement of my hand altered the trajectory right at the last second. The flashing indicators can also make it really hard to tell exactly which bobbles your shot will connect with, and I spent a lot of time trying to tilt my hands and arms to the precise degree needed to make trickier shots.

Nausea-wise Puzzle Bobble VR is one of the most comfortable experiences you can have in VR. The game is entirely stationary, with no simulated form of movement. If you’re looking for content that keeps you feeling great throughout, this is a very safe bet. that said, your arms will likely tire from being held up all the time.

But, more importantly, I could never really shake the thought that I’d either rather be playing something else in VR or revisiting the classic Puzzle Bobble games, where the tried and true dependency of gamepad aiming makes for a more precise, calculated and addictive experience. For many people, Puzzle Bobble was always a great background game, something to pass the time on a train or a lunch hour at work, stealing five minutes here and there. Bringing it into VR misses that point; it’s a time-killer in a medium designed for more committed experiences. The two don’t exactly go hand-in-hand. It’s also tiring on the arms to play for long stretches which, again, goes against its more casual roots.

There’s fun to be had in the 1-v-1 dueling mode though. You have to eliminate bobbles as quickly as possible, causing problems for your opponent as they raise towards a vortex. It echoes the multiplayer modes of the original games quite nicely, for what it’s worth.

For the most part, Puzzle Bobble VR works well and has more than enough levels to tackle. Survios puts some fun spins on the classic, even if you’ll miss the precision of the original gamepad controls. But, unless you’re a series fanatic, the five minutes here-and-there gameplay sessions this genre is best suited to don’t really work in VR. Color-matching games are never really designed to have your full attention so much as they are to distract you – that’s what’s so great about them. Puzzle Bobble VR wants your full attention and, while it’s fun, there are plenty of other VR games much more worthy of that.

For more on how we arrived at this score, read our review guidelines. What did you make of our Puzzle Bobble VR review? Let us know in the comments below!