Last week, Sony blessed the App Store with its PS4 Remote Play app, which allows PS4 owners to stream games straight from their console to the iPhone. Provided you have a beastly internet connection and a good MFi (Made for iPhone) controller, you’ll be treated to an experience that’s vaguely reminiscent of playing games on a Nintendo Switch. Remote game streaming technology remains as rough as sandpaper on asphalt, but there was generally much rejoicing.

For some of us, though, there was also plenty of head-scratching. PS4 Remote Play isn’t all that functionally different from Valve’s Steam Link app, which Apple shot down last May merely a day after Valve announced its upcoming release. Both apps are owned by publishers other than Apple. Both stream games from another device to your iPhone over Wi-Fi connections. Both apps let you buy games through the app-maker’s own store without paying any commission to Apple. They’re so similar, in fact, that I’ve spent much of the last few days scanning my news feed for word that Apple had decided to pull the plug on Remote Play as well.

That hasn’t happened yet, so what gives? As services that stream games to other devices become increasingly popular—and as everyday internet services (slowly) grow strong enough to support them—Apple needs to be far more clear about what it expects from them.

Remote game streaming technology may still be in its infancy, but the market’s already getting crowded. It’s diverse, too, as it includes not only services that stream from devices you own as in the case of PS4 Remote Play, Steam Link, and OneCast, but also “cloud gaming” services such as Nvidia’s GeForce Now that keep the games on servers far away from your home. And advances are happening all the time.

Last month, Variety reported a rumor that Samsung might be partnering with Valve to let Steam users stream games to their Galaxy S10s from anywhere. Even Google appears to be in on the action with a new service called “Project Stream” that will be properly announced at the Game Developers Conference in San Francisco next week. I was one of the lucky people who got to try out Assassin’s Creed Odyssey using only my Mac’s Chrome browser last December and I was super impressed with how well it worked.

Remote game streaming is likely the future of gaming—even if it remains a distant future). Eventually we’ll wake up to a day where average internet connections can handle this sort of thing and it’ll seem perfectly normal to play PS4 games on a phone thousands of miles from home in a hotel room. When that happens, I’d like for many of those phones to be iPhones.

Yet that may not be the case if Apple sticks to its current willy-nilly policies. We thought we understood what to expect from Apple when it pulled Steam Link back then, but the arrival of PS4 Remote Play complicates those expectations. Indeed, you could find contradictions even then.

It initially wasn’t clear why Apple pulled Steam Link, but Valve told Macworld last May that “Apple revoked its approval [of Steam Link] citing business conflicts with app guidelines that had allegedly not been realized by the original review team.” That same month, Apple marketing chief Phil Schiller explained the reasoning in greater detail in emails sent to various customers that made their way to Reddit.

“Unfortunately, the review team found that Valve’s Steam iOS app, as currently submitted, violates a number of guidelines around user-generated content, in-app purchases, content codes, etc.,” Schiller said at the time. This was widely interpreted as a rebuke of the way that Steam Link’s streaming design let people buy games through Steam without giving Apple its infamous 30 percent cut. It was “Apple being Apple,” in other words. 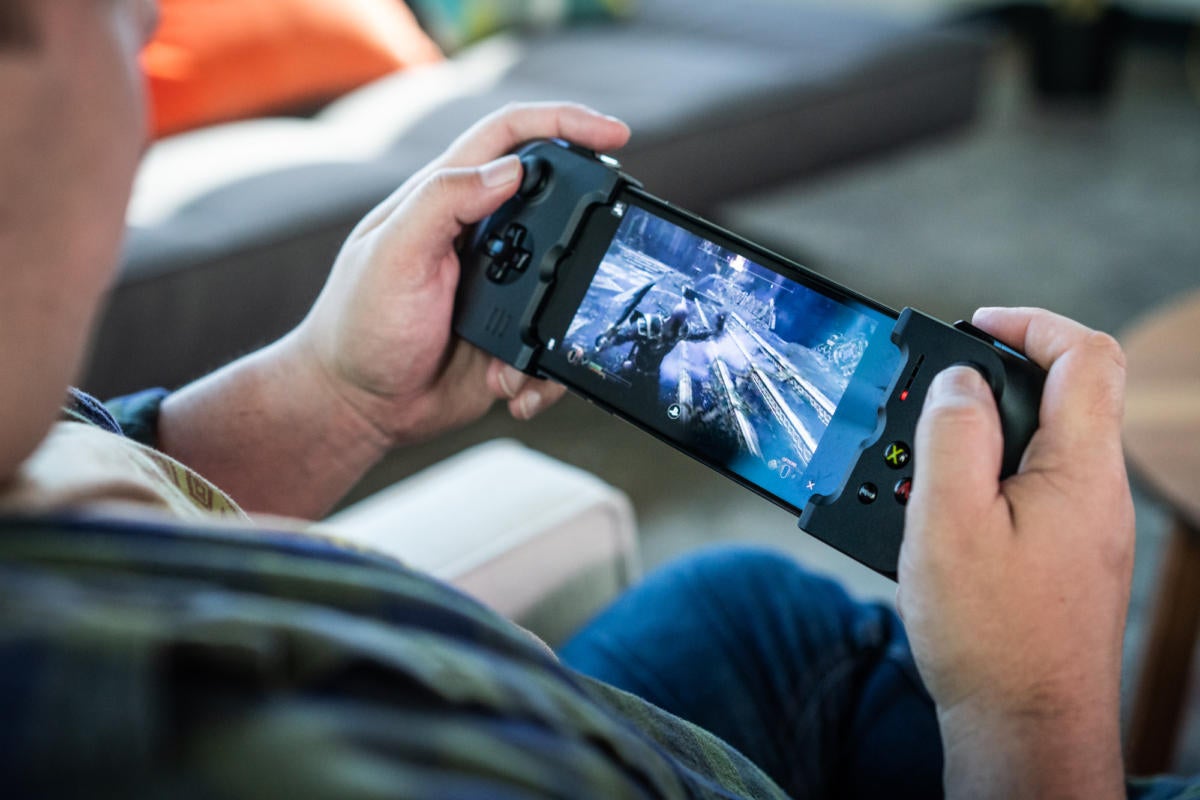 PS4 Remote Play is cool, but we struggled to get good latency here in the office.

But other apps do this very thing with no problem. In fact, a third-party app called R-PlayRemove non-product link has allowed PS4 owners to stream their games to their iPhones for years now, and developer Lei Jiang even charges $11.99 for it. Much as with PS4 Remote Play—and Steam Link, for that matter—the streaming design lets you buy games through PSN Store with R-Play in such a way that Apple will never see a dime in commission. (Notably, though, Apple does get a cut of Lei Jiang’s $12 price tag.) Valve was certainly aware of these contradictions.

As TouchArcade reported in June of last year, Valve even tried to placate Apple by redesigning the Steam Link app’s interface so you couldn’t buy any Steam games through the app. Instead, you were directed to buy the game from your PC (much in the same way the Kindle app makes you use your browser if you want to buy a book).

But no dice. Here we are, almost a full year later, and yet there’s still no Steam Link on iOS. Meanwhile, the Android version lives on—along, of course, with PS4 Remote Play and R-Play. And it’s still not clear what the issue is.

In my most wildly optimistic moments, I like to think Apple allowed PS4 Remote Play on iOS because it had a change of heart. It realized that streaming is the future, and maybe it even came to that realization in the process of shifting much of its attention toward services (and we’ll likely hear a lot more about that shift on March 25).

It’s also possible that services like Project Stream made Apple realize that it needs to change its attitude, and quick. If there’s truth to the rumor about the Galaxy S10 and Steam Games—heck, even I would tempted to get one. It’s even possible that Apple has some kind of streaming in mind for its rumored video game subscription service and it wants to see how a competitor’s services work on its own devices. Honestly, who knows? I reached out to Apple for a statement but haven’t received a reply.

Whatever the reason, Apple needs to clearly define its standards. I strongly believe Apple’s closed app system has many advantages over Google’s open one, but I hate holding my breath to see if a cool, fun, and free app like this is going to get pulled because of some arbitrary reasoning from Apple. I especially hate feeling this way when remote game streaming is becoming a technology that’s worth paying attention to. It’s exciting, frankly, and it would get me to use my iPhone more than I already do. As it is, if Apple keeps pulling services like this, it just gives more ammunition for folks who want to switch to Android.

As an Apple user, I want to feel as though I’m at the forefront of technology. I don’t want to feel like I’m missing out.