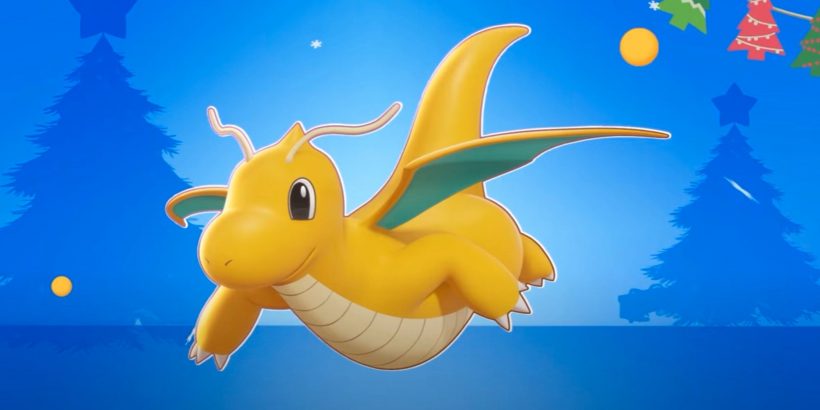 Pokemon Unite launched earlier this year and the franchise's first foray into the MOBA world is turning out to be quite the success. Developer TiMi Studios is preparing to celebrate Unite's very first Christmas, and it will be doing that via its Holiday Event which kicks off later this month on December 15. The event will usher in a lot of new content but will be headlined by an all-new playable Pokemon, Dragonite.

Dragonite's imminent arrival in Unite was leaked last month and has now been confirmed. Another all-rounder following in the footsteps of the Pokemon to have arrived in Unite directly before it, Tsareena. Nothing more than an image of Dragonite has been shown for now, but if Unite follows the same pattern as it has done before now, a video showing off its gameplay will debut before the Pokemon's in-game arrival.

Pretty much everything else coming to Unite for its first-ever holiday event is Christmas-themed. Various Pokemon will be getting holiday-themed holowear. Trainers will not only have the ability to make Pikachu look festive but picking up its Christmas holowear will also change up some of its moves. Pikachu's Unite move will become star-shaped, and presents will appear when it scores. It also seems as if most other Pokemon will be equipped with Santa hats should you choose to pop them on.

A few other Pokemon will be getting a little more than just a hat. Crustle will have holowear that includes a snow-covered shell complete with holly and what seems to be a strawberry on top, for some reason. It's also donning a pair of Christmas gloves on its claws. Mr. Mime, Snorlax, and Cramorant will be getting chef-themed holowear. Someone has to cook the Christmas dinner.

As if all of the above wasn't enough, Unite's arena will also be getting a festive makeover. From December 15, Remoat Stadium will be covered in snow and feature a handful of ice sculptures. Some of the wild Pokemon will also be more in keeping with the weather change and the time of year. Articuno will be hovering somewhere in Shrive City, and Delibird will also be doing the rounds.