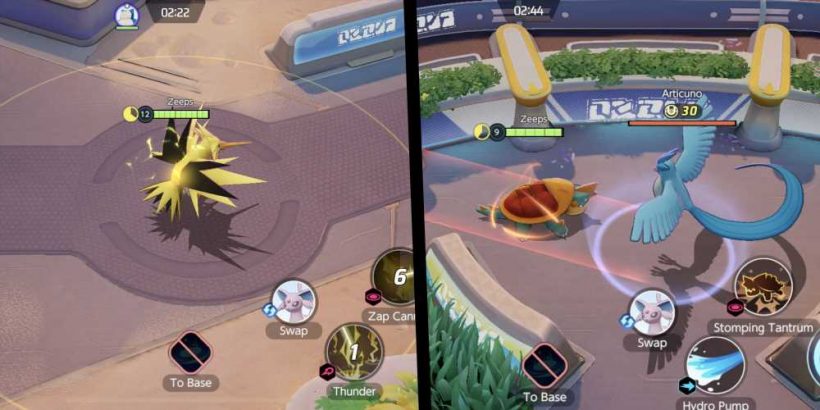 As indicated by its name, this new game mode gives you the opportunity to "catch" Wild Pokemon found in a Unite Match; then transform into them when you "send them out." Beyond this, several unique features and mechanics are found within this game mode; further presenting players with an exciting and untraditional Pokemon Unite experience.

This limited-time game mode can be chosen from the Quick Match option, only lasting for a duration of five minutes per match. Catch 'Em Battles will take place in Mer Stadium but it has different mechanics than other matches on this map, such as the spawn of Wild Pokemon.

In this game mode, each team will have four players and three enemy Goal Zones to score on; similar to other types of modes that take place here. The final minute of each match will initiate double points when scoring; then the team who has the most points at the end of the five minutes wins the match.

As mentioned earlier, this limited-time game mode gives you the opportunity to catch and play as various Wild Pokemon found throughout a match. That being said, not all Wild Pokemon on the map can be caught and played. The Pokemon that can be caught and used have a white circle surrounding them and are provided below.

To "catch" a Wild Pokemon, you must perform the final blow when defeating them. Once this is done, you can send out and take control of whichever Wild Pokemon you have caught; taking the place of your Battle Item for a set time. Each of these Pokemon possesses two different moves and varying stats; resembling the experience of playing as a standard Pokemon in this game.

When sending out a Wild Pokemon, you will spawn in with full health, then return to your original Pokemon when either you are defeated or the set time has run out. In addition to the attacks and power of these catchable Pokemon, it is important that you are catching and using this mechanic as much as possible, even if it's strictly for the benefit of giving yourself an extra life in a battle.

If you have caught a Wild Pokemon, but have not yet used them, you will be unable to catch other Wild Pokemon. Make sure that you do not already have a Wild Pokemon caught when attempting to secure important objectives because you will not gain access to them and be able to take advantage of their benefits.

Like other matches, there are several Objective Pokemon that will spawn throughout the course of a game; providing you and your team with bonuses upon their defeat. Rotom will spawn in the center of both the top and bottom lanes throughout the match, functioning how they traditionally do in other game modes. Group up with your team to defeat this Pokemon, and push an enemy Goal Zone once it is an ally.

Drednaw and Avalugg will spawn near each team's Home Base throughout the match as well. Although these Objective Pokemon do not provide the traditional team bonuses that they do in other game modes, these Pokemon are catchable in this game mode. Catching and playing as these powerful Pokemon proves to be extremely beneficial to you and your teams, often making the difference between winning and losing large team fights.

Articuno and Zapdos will also appear throughout Catch 'Em Battles; found in the center of both the top and bottom lanes respectively. Similar to Drednaw and Avalugg, these two Pokemon do not provide their traditional bonuses, but instead, serve as powerful catchable Pokemon in this game mode. Beyond their strength, each of these two Pokemon possesses an attack that can be used to make an enemy's Goal Zone vulnerable. Use Articuno's Ice Bean or Zapdos's Zap Cannon on any active enemy Goal Zone to allow you and your team to score on it instantly for 15 seconds; resembling the same effect that Rotom has.

Lastly, Regigigas will spawn in the very center of the map when there is a minute and a half remaining of every match. Similar to Articuno and Zapdos, this Pokemon can be caught when securing the last hit; allowing you to take control of this powerful Pokemon for a set time. Use Hyper Beam to make any enemy Goal Zone vulnerable, allowing you and your teammates to score instantly. This is extremely important, as double point-scoring is active at this point in the match, giving your team the opportunity to add to your score massively.