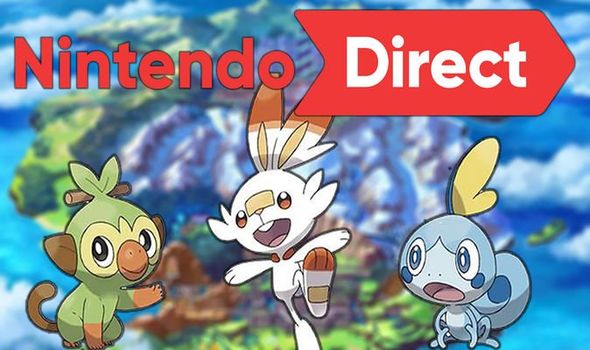 Nintendo is getting ready to hold a pre-E3 Direct conference dedicated entirely to Pokemon Sword and Shield on Switch.

The Pokemon Sword and Shield Nintendo Direct stream will take place at 2pm BST in the UK.

And the good news is that fans can watch it live below, without leaving the page. Just hit the play button in the YouTube video below at 2pm for all the latest information.

The presentation will last for approximately 15 minutes and will focus on providing fans with new details about the upcoming games.

Of course, it’s possible that all the new Pokemon Sword and Shield details have already leaked ahead of the live stream.

This includes possible information about regional variations of existing Pokemon – similar to the Alolan forms found in Sun and Moon.

The Galar variations are alleged to include the following…

• Furret: Normal/Ground (Has a drill on its tail)

• Spinarak: Bug/Ghost (is now black, but the smiley on it’s black is a bright pink)

• Houndour: Dark/Ice (“skull” on its head is now made out of ice)

• Magcargo: Fire/Water (Has now a seashell as it’s house)

• Gardevoir: Dark/Fairy (The same as previous, looks a bit like it’s Mega)

• Spoink: Poison (Tail is made of purple sludge and it’s crystal is dark purple)

One thing that’s almost certain to be revealed during the Nintendo Direct is the Pokemon Sword and Shield release date.

The game has previously been confirmed for a late 2019 release, so expect it to launch around October/November.

New starter Pokemon include a chimp called Grookey, a rabbit called Scorbunny and a water lizard known as Sobble.

“The adventure begins in Pokemon Sword and Pokemon Shield when players choose one of three new Pokemon—Grookey, Scorbunny, or Sobble,” Nintendo previously revealed.

“Grookey, a Grass-type Chimp Pokemon, is mischievous and full of boundless curiosity. Bursting with energy, Scorbunny, a Fire-type Rabbit Pokemon, is always running about. The stealthy Sobble, a Water-type Water Lizard Pokemon, shoots out attacks as it hides itself in water.”

Assassin’s Creed Valhalla Will Have Almost No Side Quests