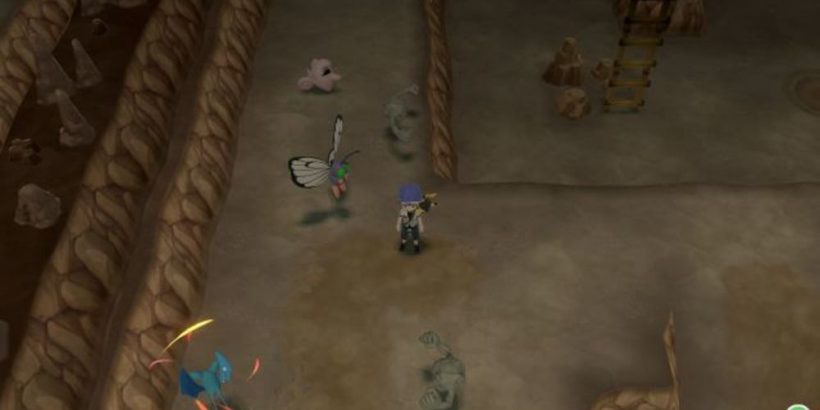 For the past two months, I have been replaying Pokemon Blue and describing my journey across Kanto as if I were a tourist, trying to soak up every pixel of a setting I returned to time and again as a child, and a place that I feel has never quite gotten the respect it deserves, despite the status of Gen 1 within the Pokemon fanbase. I'm currently up to Mt. Moon, and there I have found the first part of the game I want to dwell on and write about in more depth. Namely, the fossils, and why we have absolutely no right to take them.

I expected the excitement of discovering these fossils to be my main takeaway from the Mt. Moon portion of my journey, especially as Kabutops is one of my favourite of all the fossil Pokemon across every region. Instead, I ended up dwelling on the presence of Team Rocket, and how the way they surround and envelop you, even with weakened teams, was the first real sign of the evil gang's dominance in the region. I had taken them for granted at the time, knowing them from the anime, brushing them aside easily, seeing them as irritating roadblocks. This new perspective is deepening my appreciation for the worldbuilding, but with the fossils, that all came crashing down. I did not write about my excitement at the discovery because I did not discover them at all. Somebody else did, and then I beat him up and took them from him.

There's a strange juxtaposition in Mt. Moon being used to set up Team Rocket as the bad guys because they want to steal your Pokemon, then having you end your journey through the cave by stealing someone's Pokemon. It can be a little pointless to get too ethical when it comes to Pokemon, since it's basically virtual cockfighting mixed with the message that you should love these creatures you send into fiery battle for you, but this goes too far. This guy is a little bit eccentric, sure. He's the one who challenges you, and he's the one who offers his fossil after losing, but you don't exactly bend over backwards to dissuade him.

It feels very mean spirited. We're the main character, so the world revolves around us, but there's a nicer way to give us a fossil Pokemon without having us bully a scientist into giving us one. I'm now doubting my memory of the whole game. Do we wedgie Misty for her gym badge? Do we take Koga's lunch money? Do we stuff Zapdos into a locker? Are we just the massive bullies of Kanto? I'm hopeful this is just a one off, but what if we're just a spoiled brat who gets their own way too much and becomes a horrible person?

Last week, unrelated to my own adventures, our own Eric Switzer mused about the lack of palaeontologists in the world of Pokemon. There aren't really any fossil Pokemon we haven't personally been involved in the discovery of, and despite a lot of them packing a considerable punch, few trainers ever use them. Eric surmised that palaeontologists must exist – who else built the fossil machines, the various institutions to fossil discovery. But I have a new theory. The palaeontologists are all running scared in case we beat them up again.