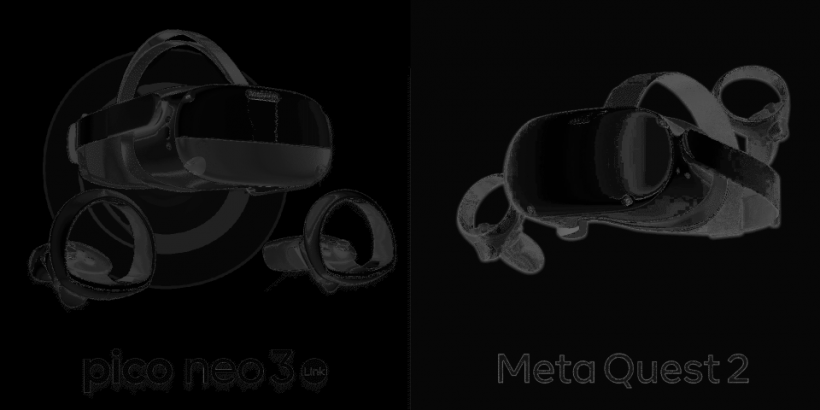 This week Pico announced the Neo 3 Link is launching to European consumers. It’s essentially the first real Quest 2 competitor, and the specifications are remarkably similar.

Quest 2 and Neo 3 Link have the same chip, the same amount of RAM, the same resolution, the same type of display, and the same lens separation control mechanism. Both have four tracking cameras mounted in identical positions.

Here’s how they both compare to HTC’s Vive Focus 3 on a spec sheet:

While Neo 3 Link is priced the same as the €449 Quest 2, that doesn’t mean they offer the same hardware value out of the box.

Quest 2 comes with a soft strap which doesn’t offer any counterbalance to the headset’s front-heavy weight. Meta will sell you an “Elite Strap” accessory for €49, or an Elite Strap with an extra battery built in for €109.

Neo 3 Link comes with this “elite” style of strap, and the battery is built into the rear. This gives it superior weight balance, and therefore comfort, without any extra costs.

Neo 3 Link and Quest 2 are both standalone (essentially VR consoles) but also support PC-based VR if you have a gaming PC, letting you play the VR content on Steam and elsewhere.

Both headsets let you do this wirelessly over your home Wi-Fi network. But Wi-Fi has considerably less bandwidth than display cables meaning the video stream has to be compressed, reducing the quality and adding a small amount of latency. Further, problems like network congestion and signal degradation can cause stutters and hitches.

Both headsets also support wired PC VR – but Pico Neo 3 Link’s unique feature is how its connection differs from Quest’s.

Quest’s wired PC VR support works via USB. This avoids the problems of wireless but it’s still a compressed video stream, since even USB 3.0 has considerably less bandwidth than display cables. It also can introduce new issues, as not all motherboard USB controllers can handle this kind of use case.

Pico Neo 3 Link’s wired PC VR mode uses DisplayPort, with a 5 meter cable included in the box. Just like PC-only headsets such as Valve’s Index this delivers an uncompressed video stream with no extra latency and no USB issues. The Neo 3 is both a standalone headset and a “real” PC VR headset, in one product.

Both headsets have extremely similar controllers; with a thumbstick, two buttons, index trigger, grip trigger, and menu button, tracked by a ring with infrared LEDs under the IR-transparent plastic.

But Quest 2 also supports controller-free hand tracking. In games such as Hand Physics Lab, ForeVR Darts, Unplugged, Cubism, Waltz of the Wizard and Vacation Simulator you don’t need to pick up controllers at all.

The hand tracking quality isn’t perfect, but it’s a unique experience that lets you use the full dexterity of your fingers instead of being restricted to buttons, triggers, and sticks. And in social VR it can let you express yourself in new ways.

That 120 Hz mode isn’t practical for most games to reach as it only gives 8 milliseconds for each frame to be rendered. But titles like Eleven Table Tennis use it to give extra responsiveness and lower latency than is possible on Pico or HTC standalones.