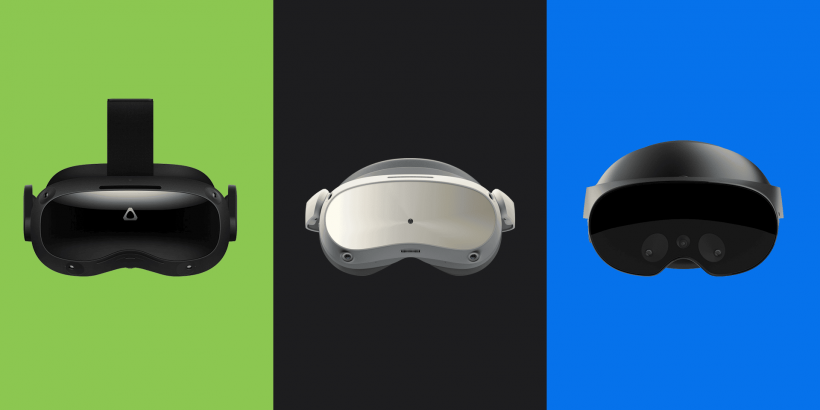 Pico 4 Enterprise was announced today with a significantly lower price than its competitors. But how do its specs & features compare?

Here’s an on-paper comparison between it, HTC’s Vive Focus 3, and Meta’s Quest Pro:

Of course, on paper spec sheets don’t tell the whole story – we have a review of the consumer Pico 4 comparing it to Quest 2, and we plan to review Meta’s Quest Pro and compare it to Pico 4 when it ships.

Pico 4 Enterprise and Vive Focus 3 are marketed and sold to businesses with business-focused system software and enterprise management features.

Vive Focus 3 has fresnel lenses, as did all headsets outside China when it released. Pico 4 Enterprise and Quest Pro have pancake lenses, which support smaller panels with a shorter gap to the lenses, and thus a slimmer & lighter visor.

All three headsets use LCD panels, but Quest Pro’s are unique. They have local dimming via over 500 Mini-LED backlights, and quantum dots. Meta claims the Mini-LEDs deliver 75% more contrast and the quantum dots enable a 30% wider color gamut.

All three systems use one camera per eye. They also all support Eye Tracked Foveated Rendering – the technique where only the small region of the display you’re currently looking at is rendered in full resolution, thus freeing up performance or allowing for a higher base resolution, since the rest is lower resolution.

Eye tracking has other use cases too, such as making eye contact in social experiences and measuring your IPD.

Each person has a slightly different distance between their eyes – their interpupillary distance (IPD). If a headset’s lenses aren’t closely aligned with your eyes, the image can be blurry and it can even cause eye strain.

Pico 4 Enterprise handles IPD fully automatically. The eye tracking measures the distance between your pupils, and the motorized lenses move to match. They can get as close as 58mm. However, in our consumer Pico 4 review we noted the lenses crush your nose below 62mm. The Enterprise model appears to add nose padding, but Pico is only listing support for 62-72mm.

Quest Pro also uses its eye tracking to measure your IPD, but the lenses aren’t motorized. It guides you to move them by hand to the correct separation for your IPD.

Vive Focus 3’s lens separation adjustment is fully manual. As with most consumer headsets, you have to just choose what separation looks best.

XR2 has the RAM stacked on top of the chip, whereas XR2+ has the RAM to the side to enable better thermal dissipation and thus higher sustained performance. Qualcomm said XR2+ can deliver “50% higher sustained power”. However, a Meta representative told UploadVR that on Quest Pro that figure “refers to the increased SoC power that supports additional sensors and new use cases” and apps not using these new features will only have “a little more performance headroom”.

Vive Focus 3 has 8GB of LPDDR4X RAM, while Pico 4 Enterprise has 8GB of faster LPDDR5 RAM.

All three headsets can show you the real world via onboard cameras, but there are significant differences.

The passthrough on Pico 4 Enterprise and Quest Pro has color, while on Vive Focus 3 it’s in black & white.

But the more significant difference is in depth. Vive Focus 3 passthrough is monoscopic, meaning there’s no sense of depth at all. Pico 4 passthrough is stereoscopic, but it’s faked from the monoscopic RGB camera in the center so isn’t depth-correct – the scale looks off and it feels wrong.

Quest Pro’s passthrough is 3D and depth-correct, reconstructed from the two front tracking cameras then colorized with the RGB camera. It’s suitable for mixed reality apps, making Quest Pro both a VR and MR headset.

Pico 4 Enterprise doesn’t support colocation. Vive Focus 3 does, and it’s already being used in VR arcades to significantly reduce cost by removing the requirement for an external tracking system.

Quest Pro won’t have colocation support at launch, but it’s coming in a software update later this year.

Pico 4 Enterprise and Vive Focus 3 use four fisheye cameras to track infrared (IR) LEDs under plastic geometry on their controllers. Vive Focus 3’s controllers house these IR LEDs in a ring in front of your hand, but Pico 4’s controllers have them in an arc over your hands. The advantage is that you can bring your hands much closer together without bashing together plastic you can’t see inside VR.

Quest Pro’s controllers are self-tracking, with three cameras and an onboard chipset, meaning tracking works at any angle regardless of where the headset is facing. Included stylus tips attach to the bottom so they can act as pens to draw on virtual whiteboards.

All three headsets charge via USB-C, but Quest Pro also has pogo pins to charge wirelessly via the included dock.

Vive Focus 3’s unique feature is the battery is removable and swappable, so if you buy multiple you can quickly get back into VR when one runs out.

Wi-Fi 6E adds the new 6 GHz frequency band. The higher frequency, compared to the existing 2.4 GHz and 5 GHz bands, allows for higher bandwidth and less interference from other devices – though it can’t travel as far or penetrate walls as well.

Pico 4 Enterprise and Quest Pro have 256GB storage, but it can’t be expanded.

Vive Focus 3 has only 128GB onboard, but it has a microSD slot that supports up to 2TB cards.