BlizzCon 2019takes place this weekend, and although Blizzard seems to have had a pretty unlucky run lately, the company could be set to turn all that around at the annual celebration.

The company hasn’t revealed specifically what it’s going to show at the event, but in the weeks leading up to the Opening Ceremony, there have been leaks galore detailing what may be announced.

Renowned Blizzard leaker@metro_OWtook to Twitter to hint at two huge announcements due to appear at the annual Blizzard show just a few weeks ago.

"For anyone who cares, Diablo 4 and Diablo 2 Remastered will also be announced" the leaker noted. You can read more about that at the link.

We’ll be reporting live from the show floor and will bring you all the information as it happens – but in the meantime, here’s everything we know about Overwatch 2.

Last week, a report fromESPNsuggested that the outlet had acquird a document revealing the existence of Overwatch 2, with a source internally at Blizzard confirming to the site that it’s real.

ESPN writes that Overwatch 2 will ship with a new PvE element (unlike the original) and will include a more traditional narrative that players would expect to see in games.

The story content at launch will focus on missions that include "a four-player story experience set in Rio de Janeiro". Exciting!

The new release in the Overwatch series will introduce a fresh mode into the PvP aspect of the game, too. Named Push, the new game type will debut on a new map set in Toronto.

We’re also expecting to see the announcement of a new hero – Echo – revealed at the event.

Rumours have been ongoing since June that Overwatch 2 is in the works, with the initial information about the project uncovered by Kotaku’s Jason Schreier.

"In conversations since [BlizzCon 2018], two sources told me that regardless of the company’s statement, there had been plans throughout 2018 to announce the game [Diablo 4] this year," notedKotaku.

At one point, some artwork temporarily appeared on the Blizz Gear Shop.

Blizzard quickly took the art down, butMMO Championforum users quickly archieved the art for all to see. The new character, Echo, appears to join familiar faces in the Overwatch crew in the image.

Overwatch 2 – Not what you’re expecting?

We could see a game other than Overwatch 2 announced at BlizzCon.

In a recent interview exclusively with Daily Star, J. Allen Brack, president at Blizzard, explained that the rumoured Overwatch 2 could be just the beginning when it comes to expanding the much-loved universe.

"It’s not hard to imagine different kinds of games existing within our IPs," Brack says.

You can read thefull interviewat the link. 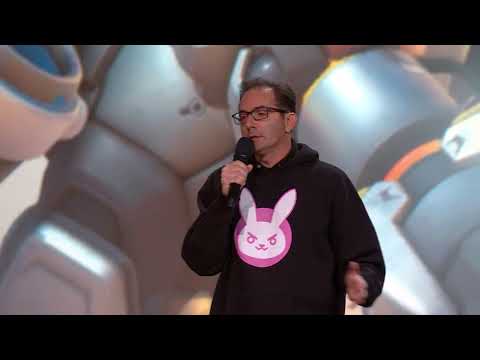 There will be some pre-game events, too: these start on Thursday, October 31, 9am and will run until 5 pm (LA time)