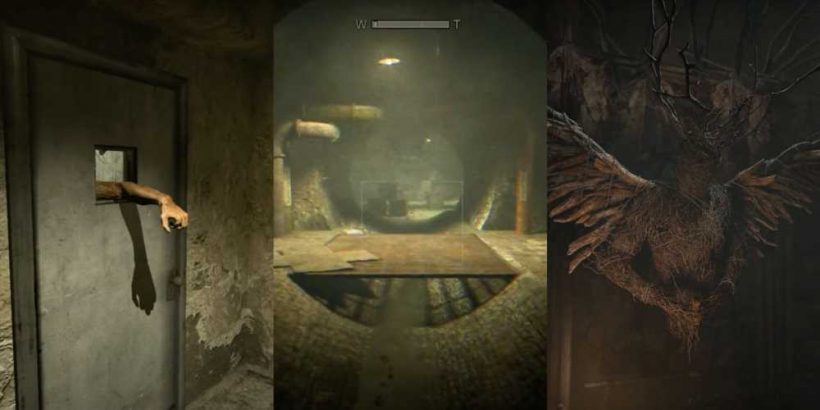 With a game set in a terrifying psychiatric hospital and a cult-run town, the Outlast developers sure know how to pick their settings. In the grand scheme of things, Mount Massive and Temple Gate are both horrifying in their entirety. But, there are certainly plenty of specific areas within each setting that are particularly bloodcurdling.

Whether the location is scary because of its overall ambiance, or because of its implication for the plot, these areas are probably the last place you’d ever want to find yourself, whether in-game or in reality. Some of them are dimly lit, while others are covered in blood. Either way, the series has plenty of creepy locations to explore. 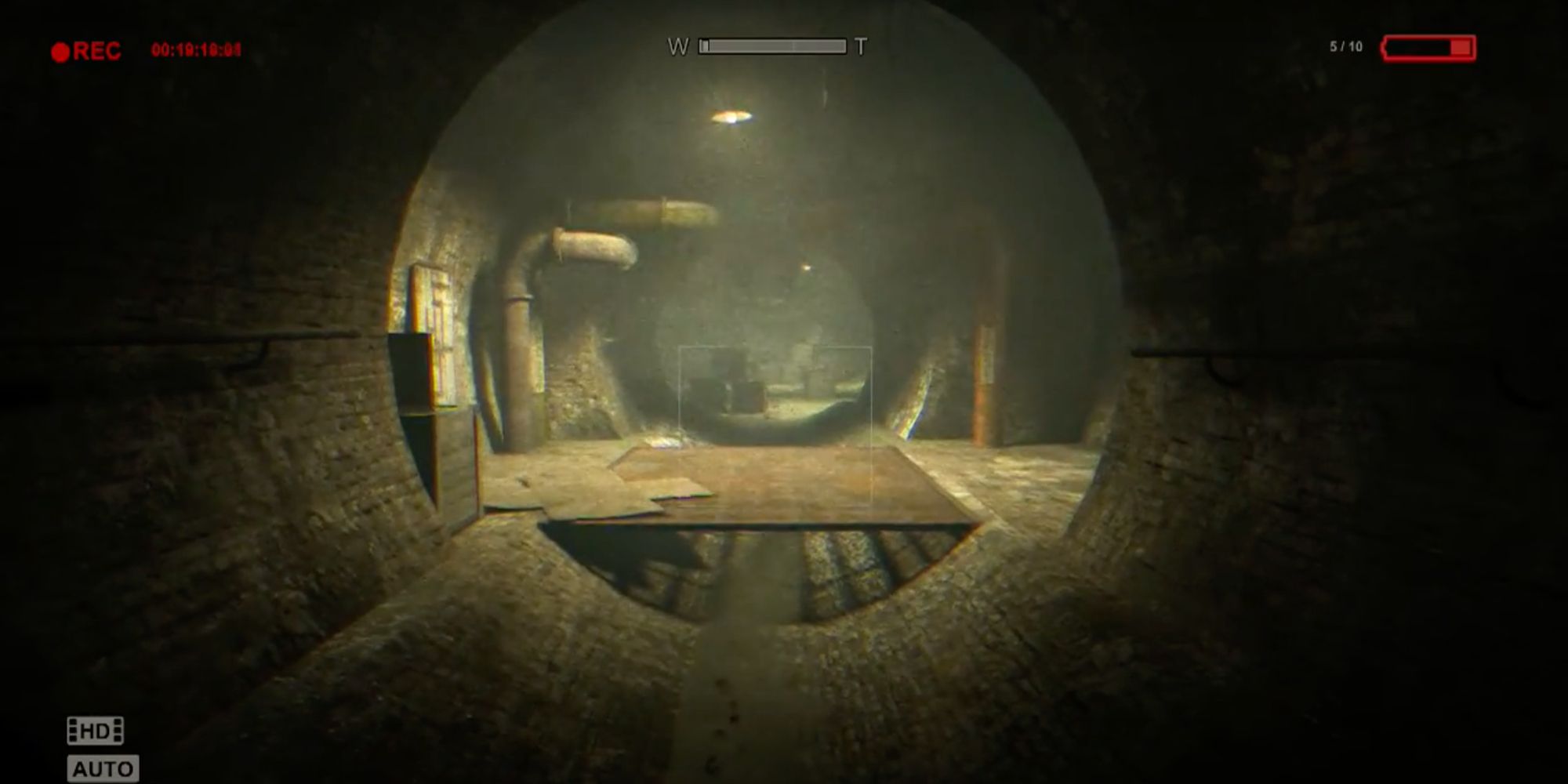 There likely isn’t any universe where a sewer is somewhere you actively want to go. Besides the fact that you’re likely walking through waste, traversing the dark sewer tunnels is an eerie experience. At this point in the game, you’ve experienced plenty of chasing and hiding, so making your way into the sewer doesn’t feel too promising.

If the dark underground tunnels weren’t creepy enough, you’ll be chased by Chris Walker and other patients who are out for blood. 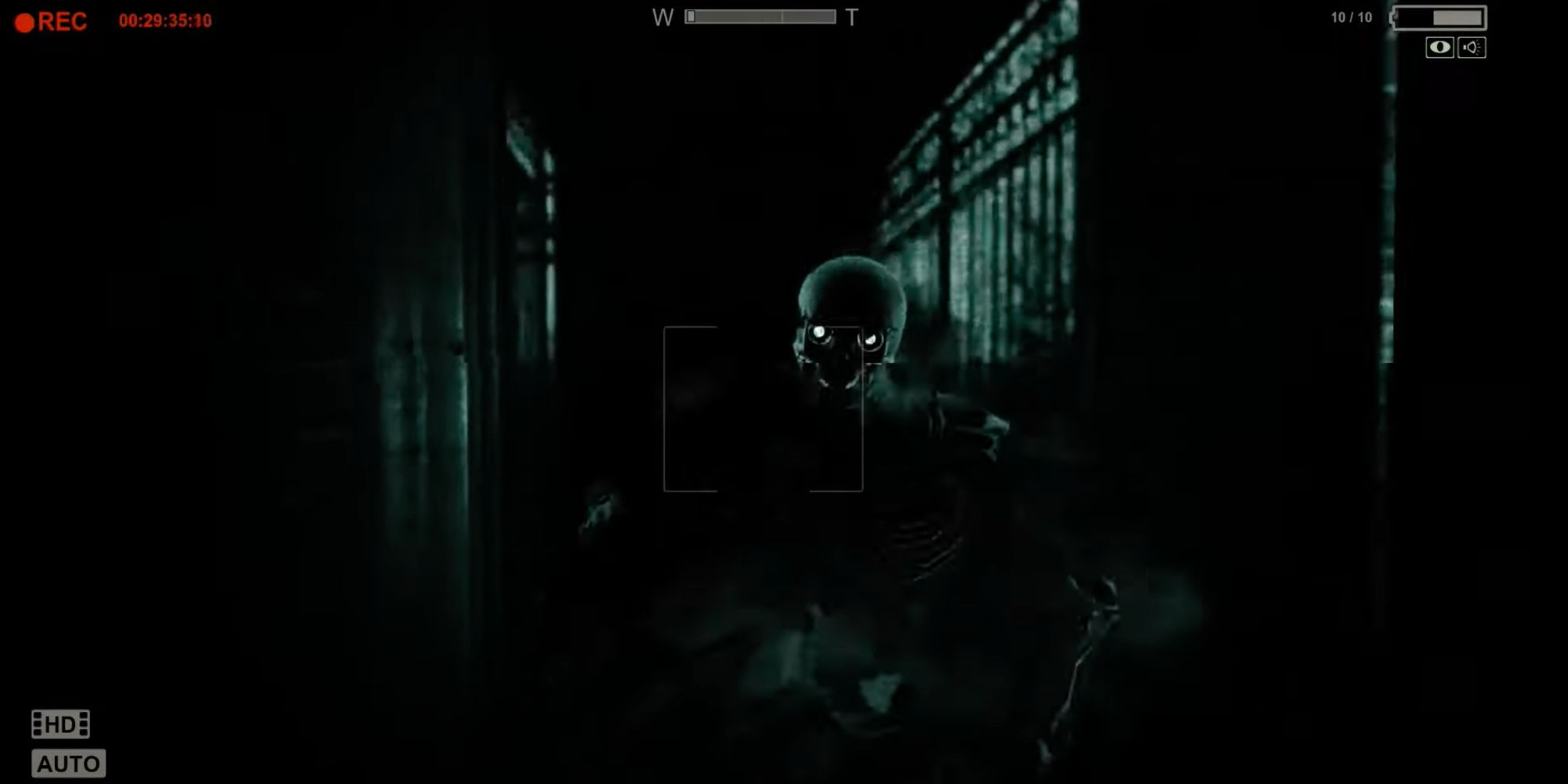 This outdoor area in Outlast is creepy simply for its aesthetic and importance to the plot. When you enter the courtyard, it’s dark and raining. Messages are written on the walls and in documents, some of which are from Father Martin with culty symbolism.

But what makes it truly terrifying is the Walrider. You’ll feel like you’re playing a true paranormal horror story in the more traditional outdoor setting. And to make matters worse, Chris Walker also makes an appearance. 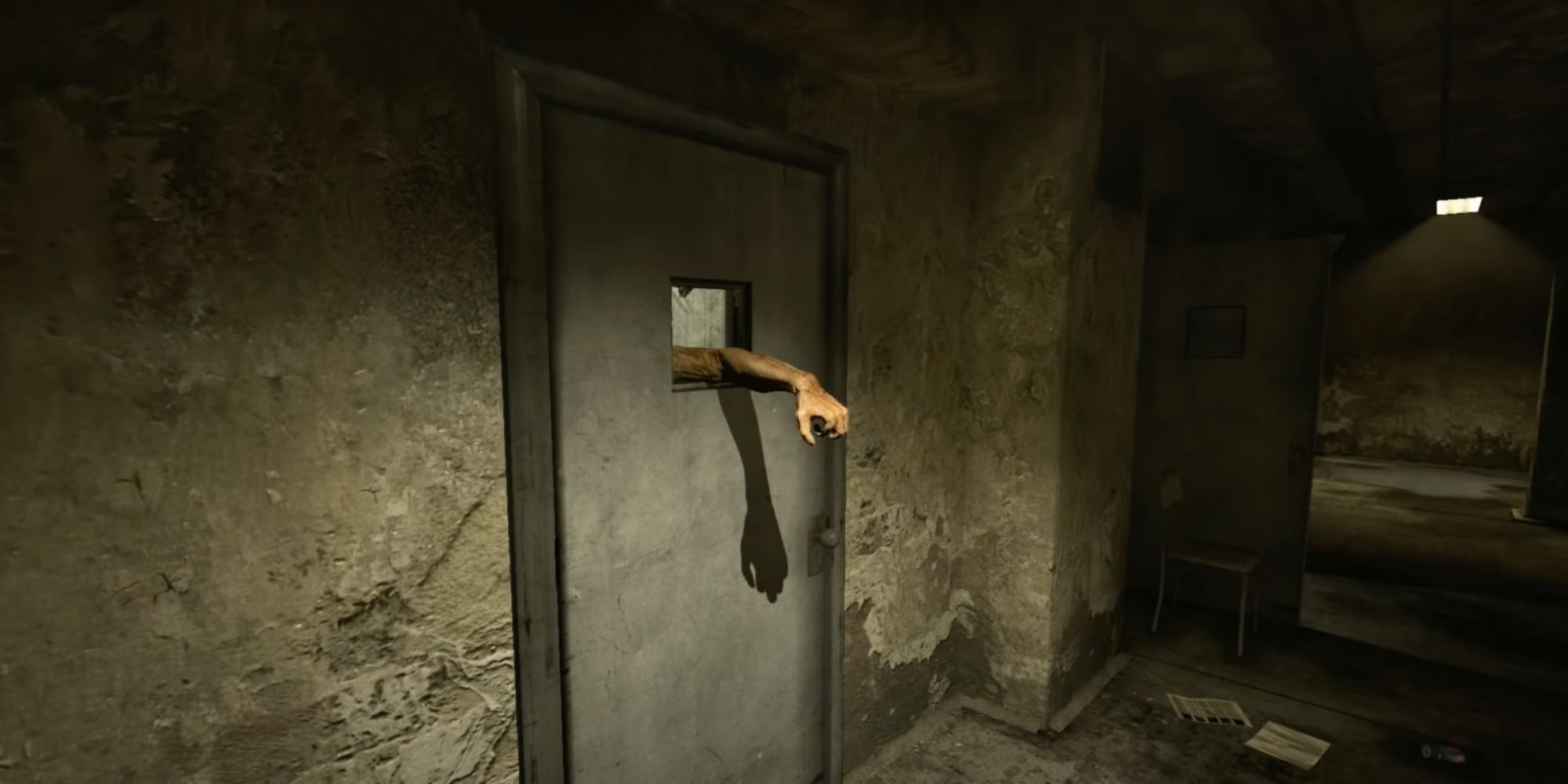 The Prison Block holds patients both harmless and violent, but it’s clear that the more volatile inmates have taken over Mount Massive. The area is a free-for-all. Many of the patients are outside their cells and attacking each other.

It also doesn’t help that you wake up in a padded cell, making your journey through the prison a bit weirder than it already could’ve been. It’s a chilling place to visit as you’re not quite sure if or when a patient is going to attack you. 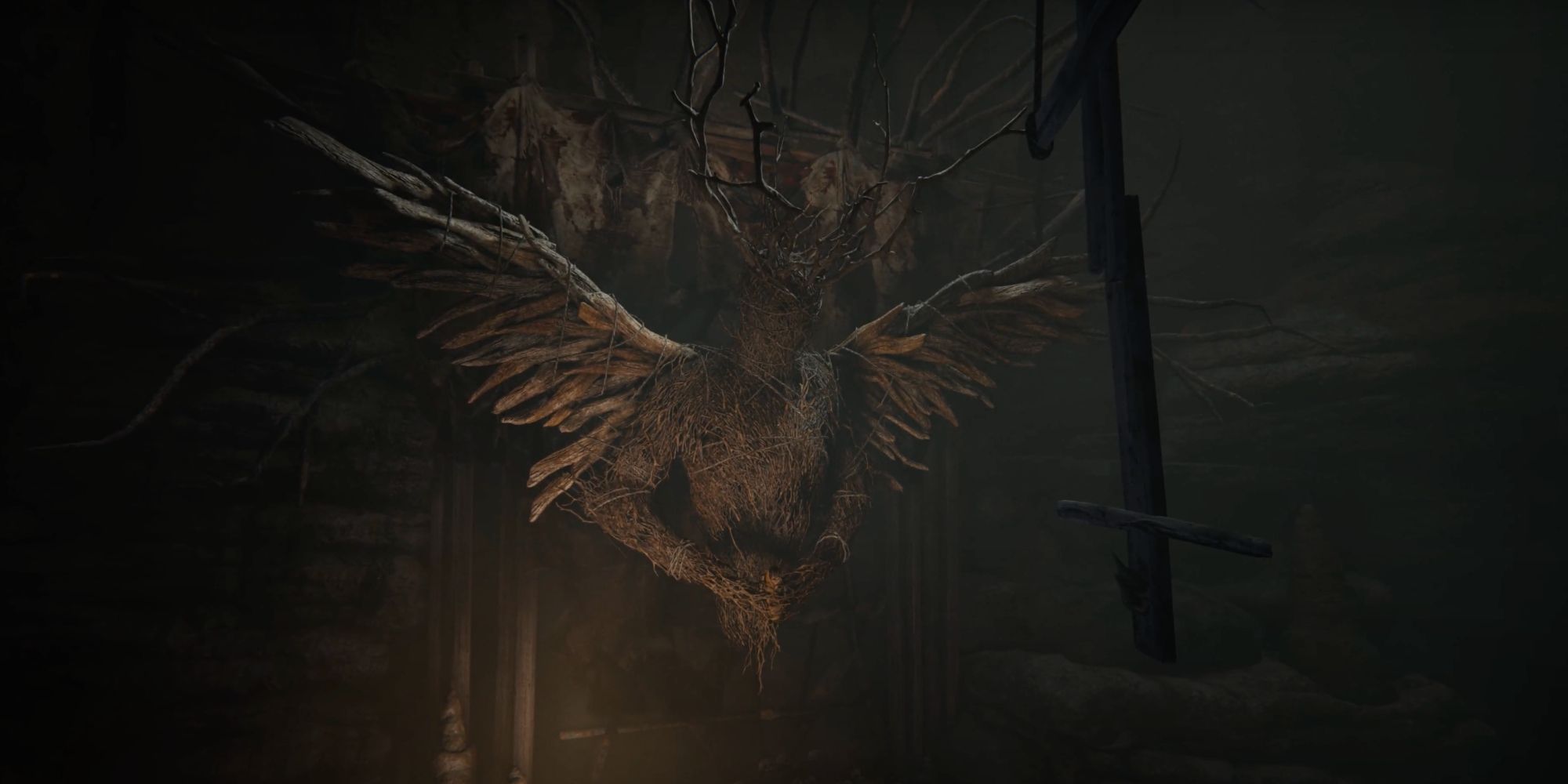 Moving along into Outlast 2, you play Blake Langermann, a man who’s joining his wife’s investigation of a rural town in Arizona. Temple Gate is a disturbing and twisted place, and you’re met with something uniquely terrifying every step of the way.

After some time, you’ll find some sort of heretic temple hidden underground in a mine within the mountains. It’s some of the first of the heretic handiwork that you can see. The temple is only made darker when considering the people behind its creation. 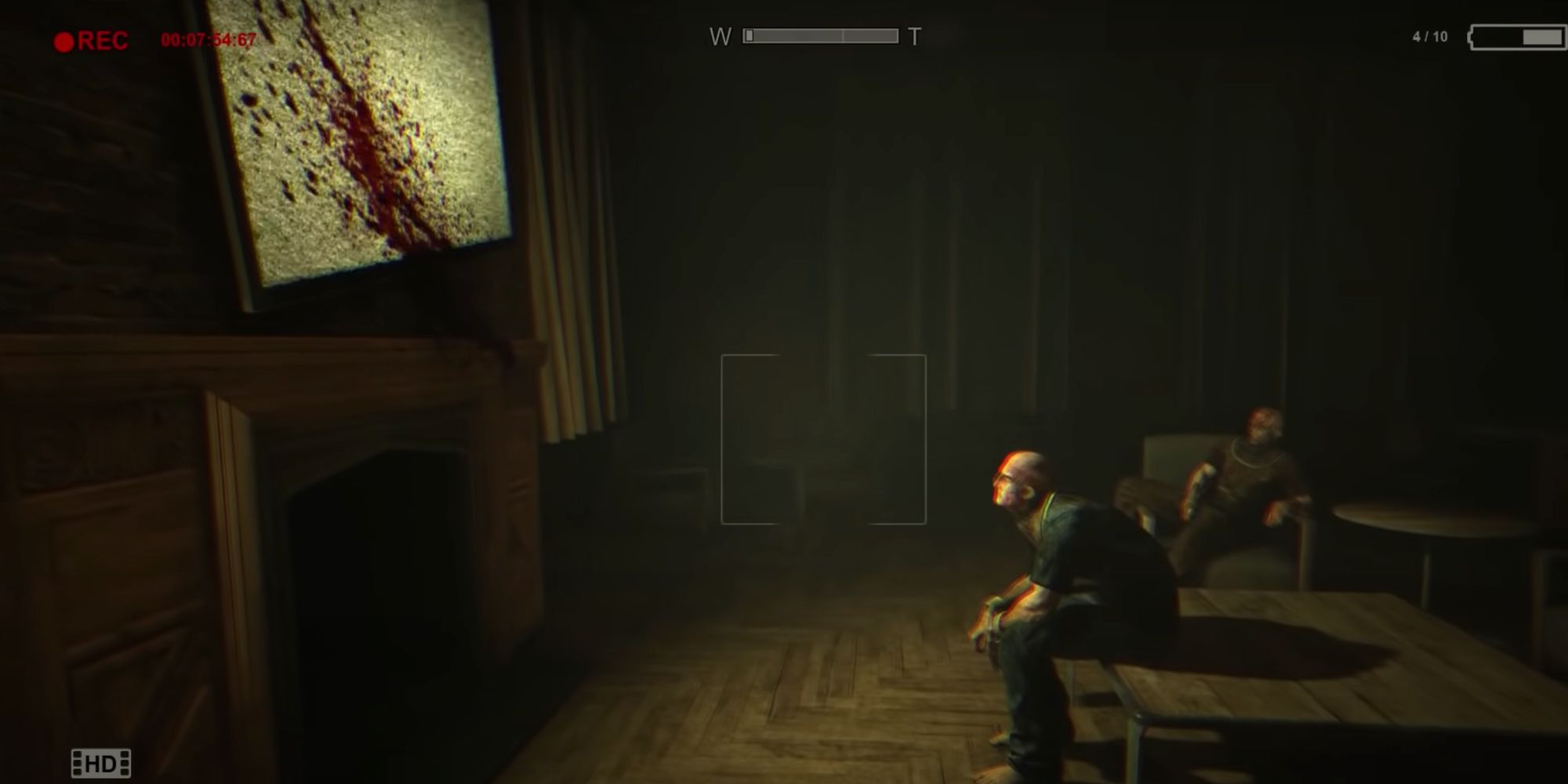 When you first enter Mount Massive, it doesn’t take investigative journalism to deduce that things have gone horribly wrong. Guards have been killed, things are destroyed, and blood decorates the walls and floor.

Unfortunately, you’ll have your first encounter with a particularly disgruntled patient, but after that, you’ll have some time to walk among the more docile patients. It’s worth noting that these patients are only harmless to you now, as you enter a room where patients absentmindedly stare at a blood-smeared television screen. 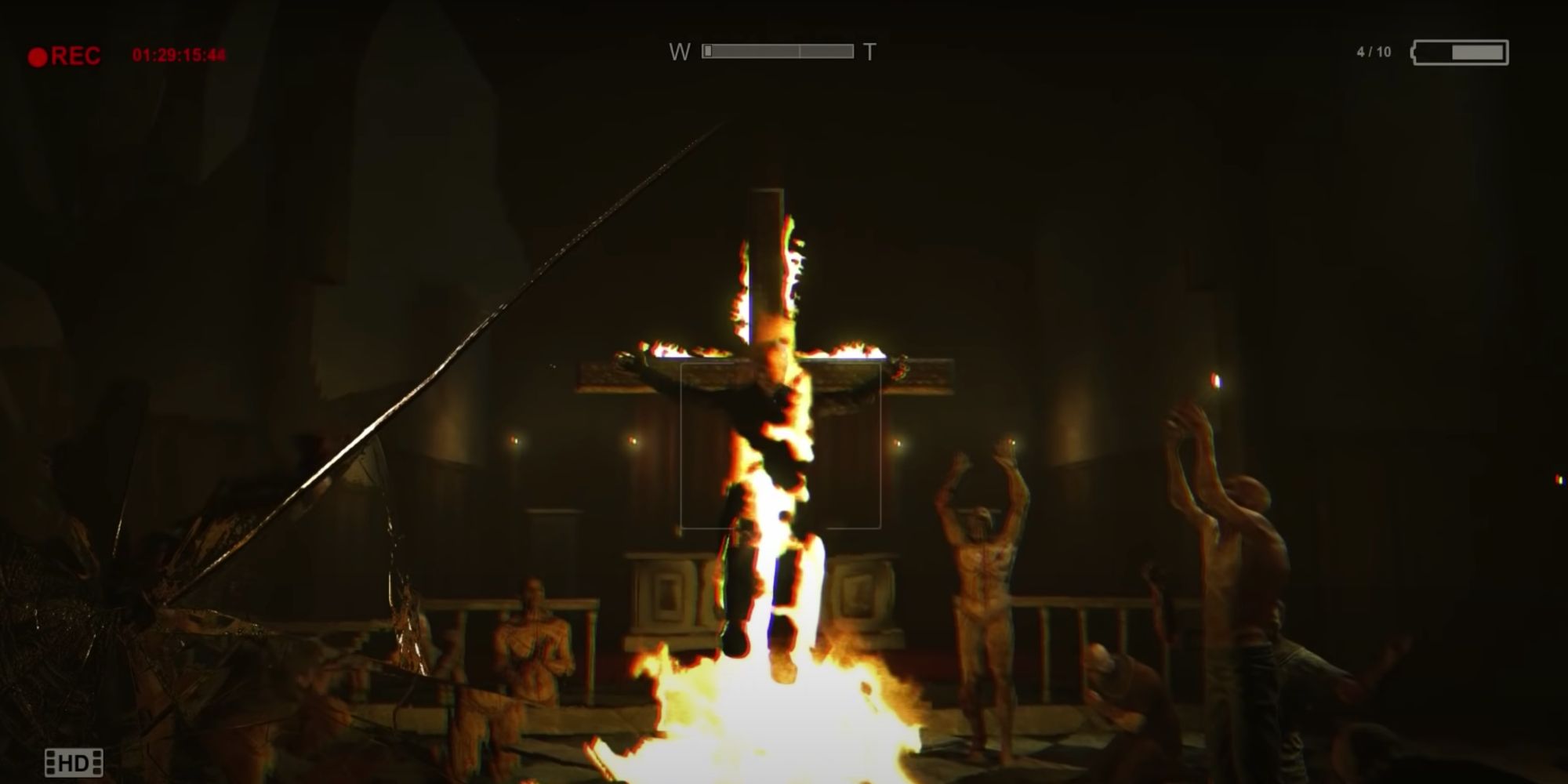 Father Martin has mustered up quite the following since Mount Massive delved into unmitigated chaos, and he wants you to document his journey. He’s played the role as a sort of twisted BioShock Atlas for you. In this case, you’re following his directions, but you definitely don’t appreciate them.

Eventually, you’ll make your way to the church, but what you see there is disturbingly unexpected. Father Martin has been set on fire and crucified, by his own request. Watching him burn there is an upsetting sight, especially when you see his apostles worshiping him. 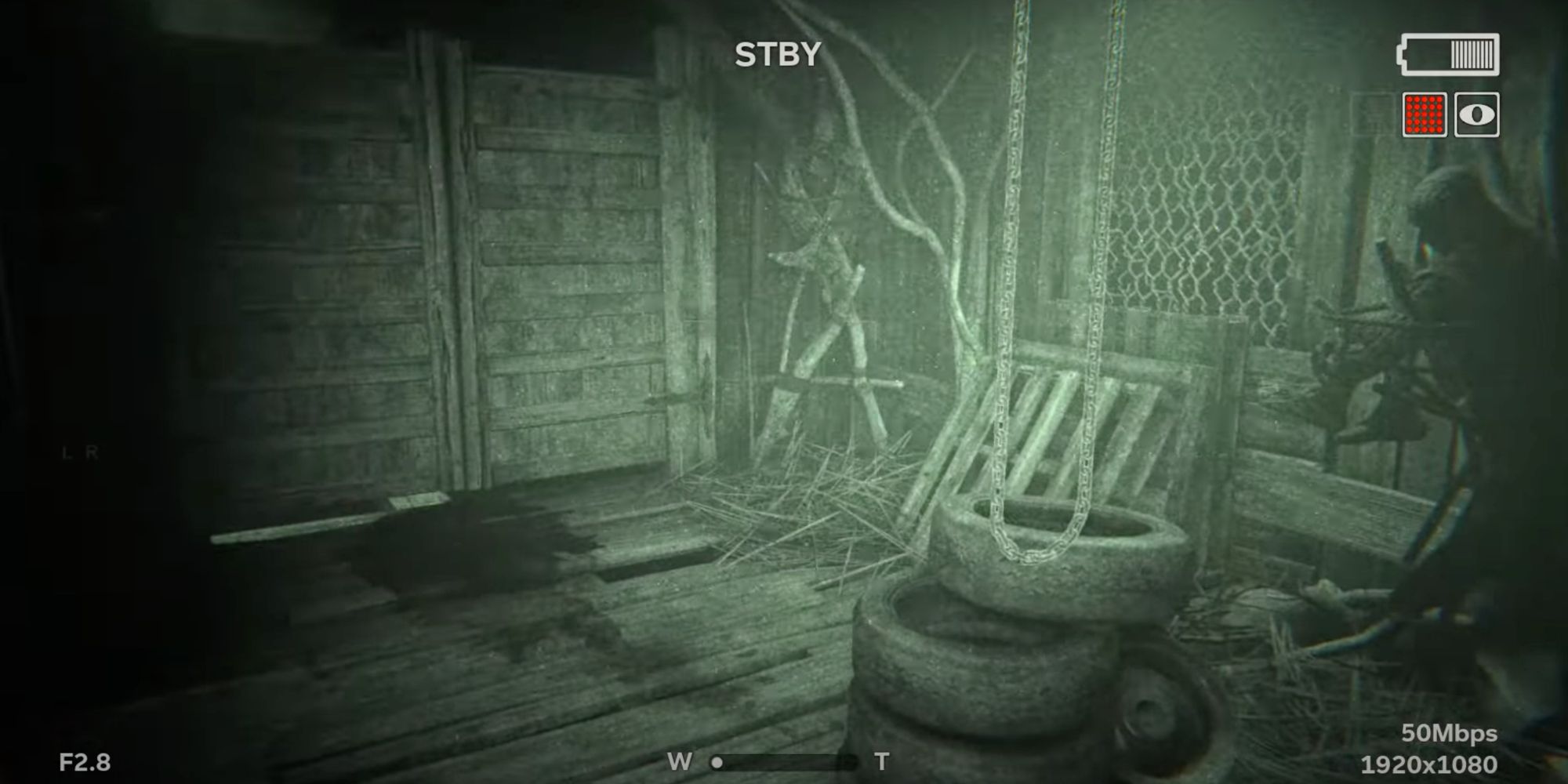 After plenty of time spent hiding from and evading enemies, you’ll be able to enter a barn. You’ll climb up a ladder into the barn’s attic. Of course, it’s not a normal barn. There are disturbing letters regarding the cult and bodies of the townspeople strewn around the room. One body is chained up, hanging from the ceiling from a moving contraption.

If you’re in the right, or rather wrong, spot, the body will shove you out of the attic and onto a pile of, you guessed it, more bodies.

3 The Chapel Of Temple Gate – Outlast 2 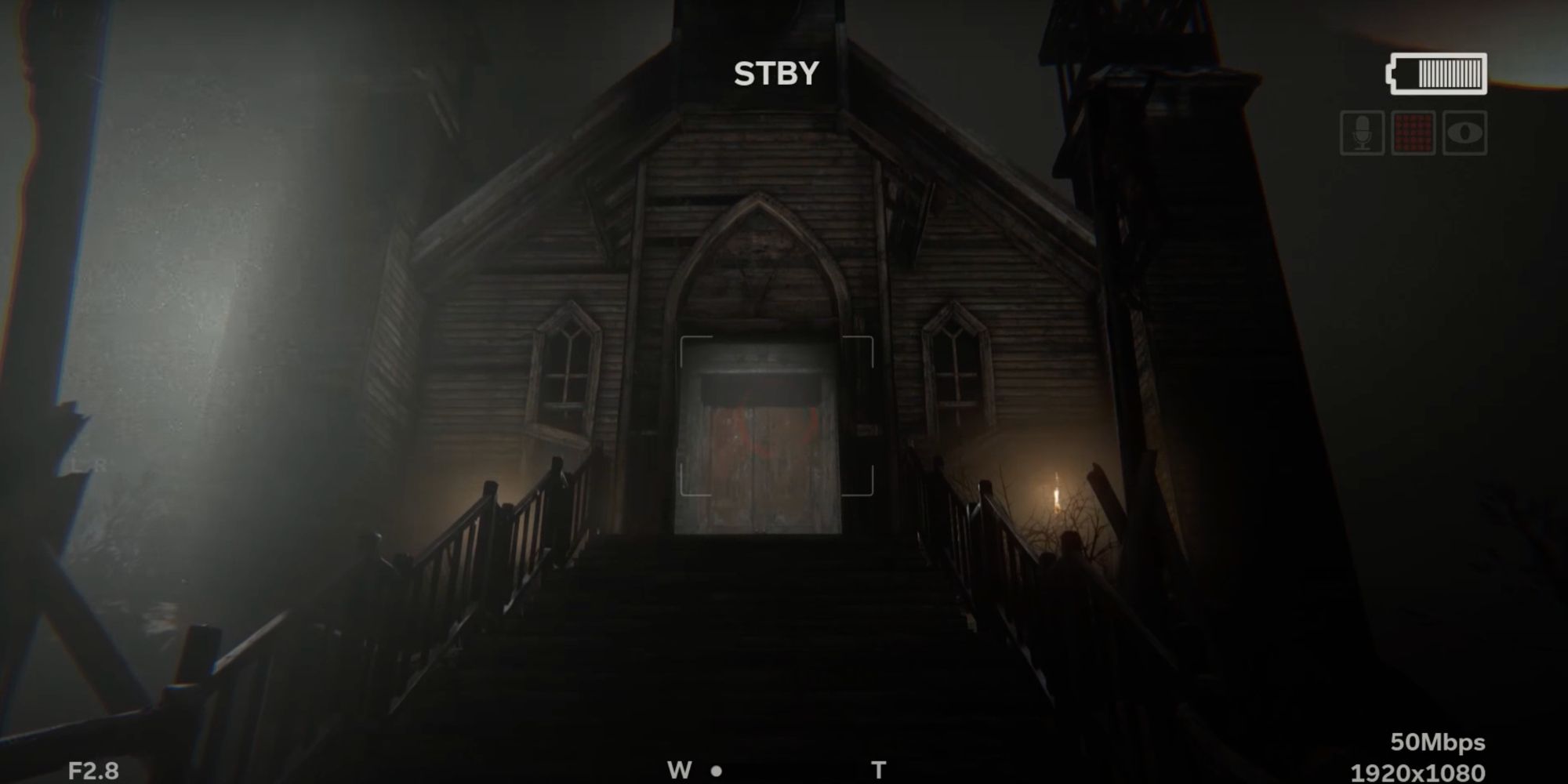 Getting to the chapel is a significant part of your journey, and once you arrive there, you’ll understand why. Many rituals have been completed here for the cult, which is made apparent by the dead or tortured townspeople in the building.

Papa Knoth’s chair in the front of the room feels like his own twisted version of the Iron Throne. Above it, there's a cross adorned with what seems to be tortured souls. Nearby is an actual person being tortured on a large wheel. 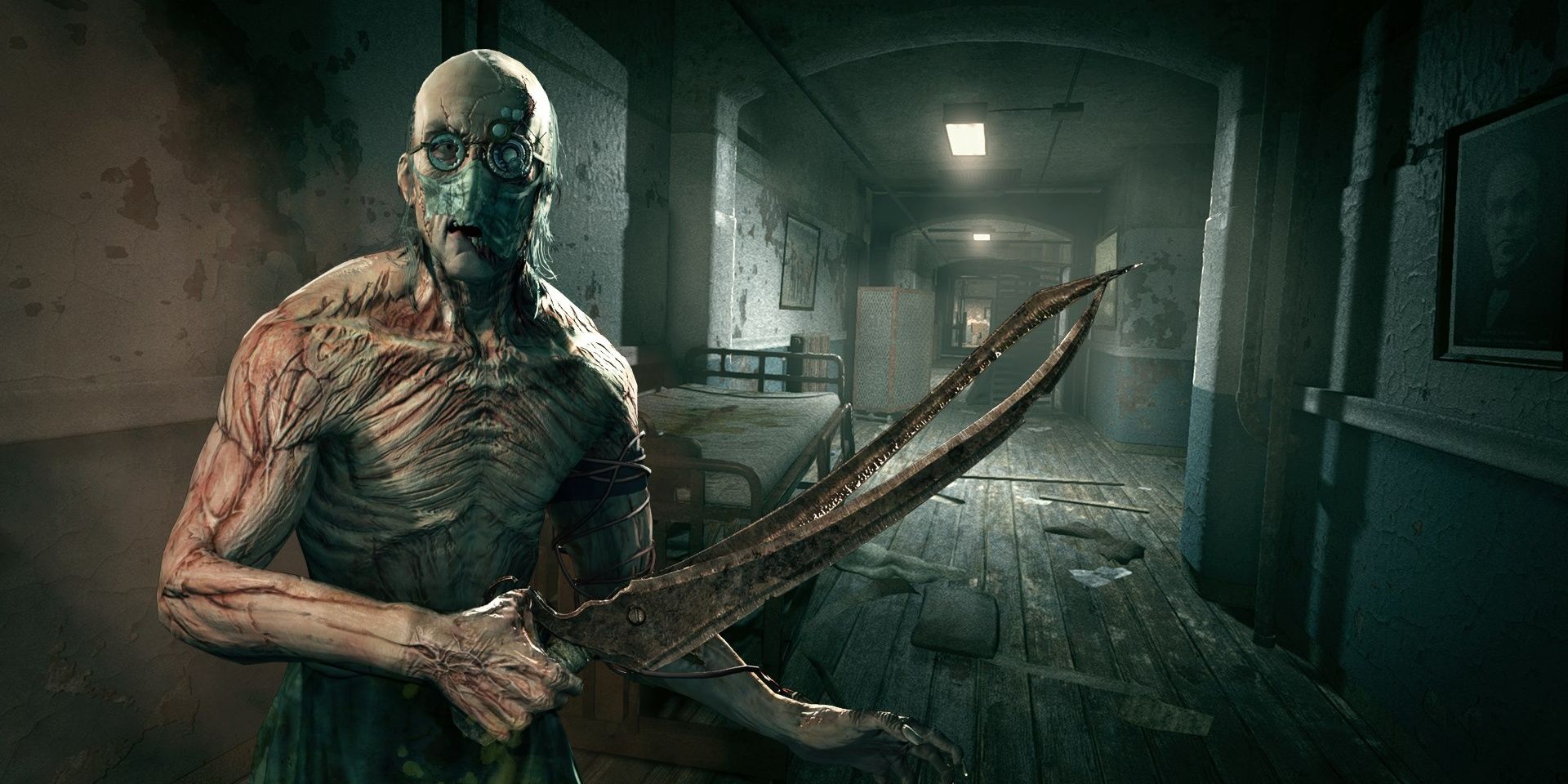 The Male Ward is one of the more well-known sections of Mount Massive. When you enter it, you’ll find a new sadist who’s taken claim to the area. Richard Trager. Richard is a wannabe doctor and has made the wing his own personal surgery room, but he’s definitely not performing surgery, if you can even call it that, to help his fellow patients.

Deformed people in hospital beds can be found throughout the area. They’ve clearly been tortured by Trager, as you’ll get to see his experiments for yourself. 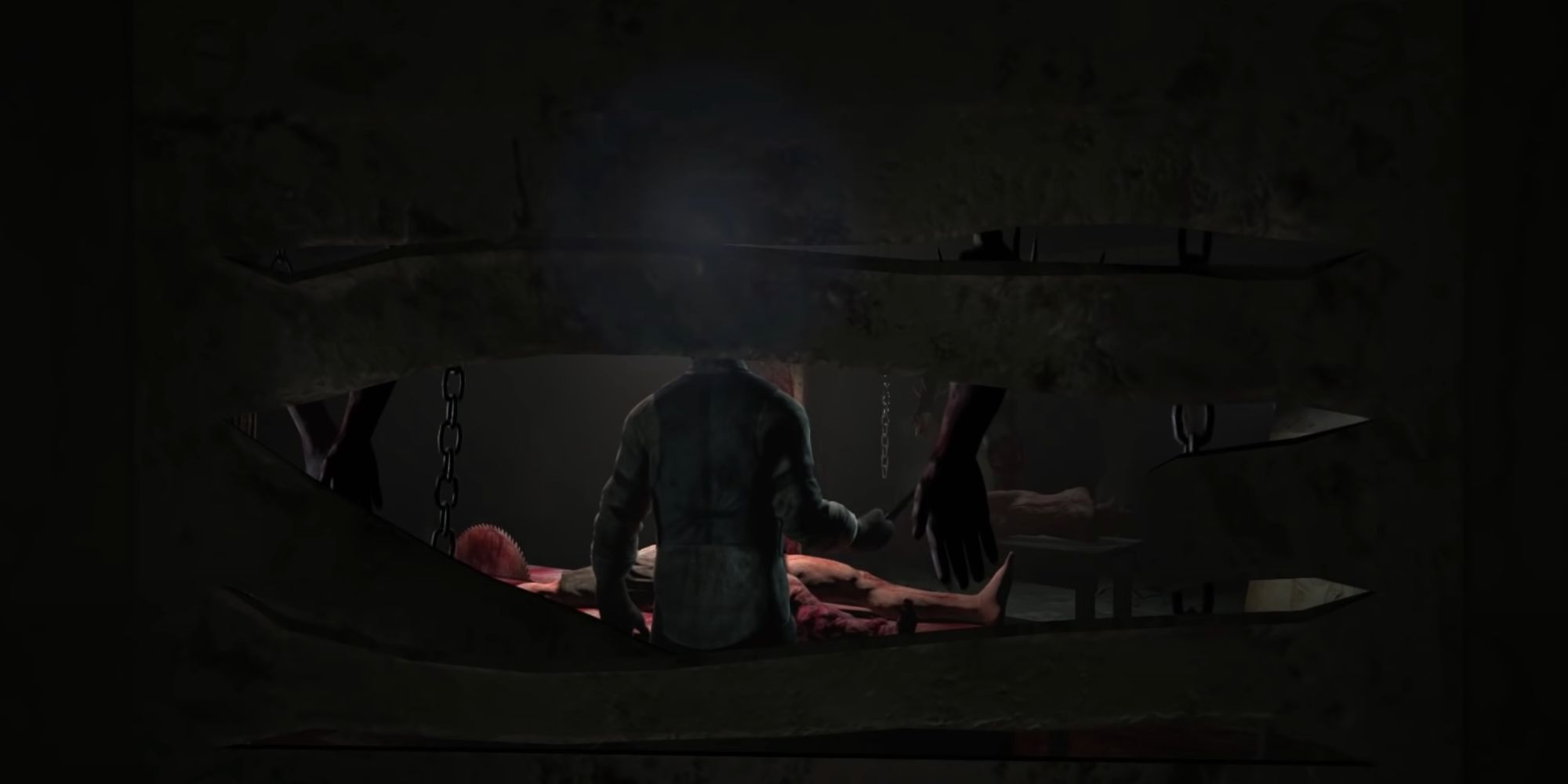 The Outlast: Whistleblower DLC prominently stands out on its own between the two games. You’re back in Mount Massive, before the events of the previous game, but this time as Waylon Park, a software engineer working for the Murkoff Company.

You’re trapped in the facility just like everyone else, trying to find a way out. On your journey through the vocational area, you’ll find yourself in the throes of a sadistic inmate set on turning male patients into his potential bride. It's a terrifying experience as you avoid having some of your appendages removed.