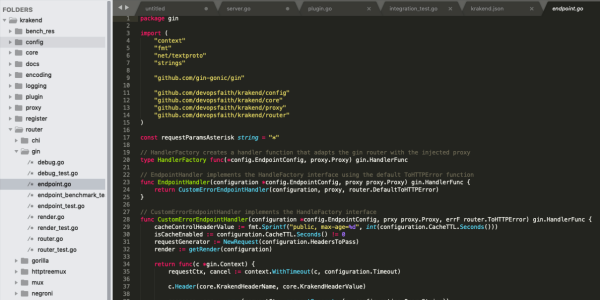 The Linux Foundation has added another new entity to its growing arsenal of projects, today revealing that open source stateless API gateway KrakenD is now under its wing as the newly rebranded Lura Project. There, it will serve as the “only enterprise-grade API gateway hosted in a neutral, open forum,” according to a statement issued by the Linux Foundation.

Application programming interfaces (APIs) are what enable different pieces of software components to connect to each other and share data. The economy around APIs is thriving, driven in part by organizations’ shift from tightly woven monolithic applications to “microservices.” By splitting applications into smaller segments that connect by APIs, businesses and developers have more agility in terms of maintaining and scaling their software. Moreover, it allows them to tap domain-specific expertise from third parties — rather than having to build the entire infrastructure to offer in-app video messaging, for example, they can use purpose-built APIs created by specialists instead.

However, the fact that a single application may siphon from dozens of internal or external APIs has opened the door to a billion-dollar API management market, with myriad tools designed to help developers create and deploy APIs, control and monitor access, analyze data, and more. Some of the notable players in the space include Apigee, which Google acquired for $625 million back in 2016; Mulesoft, which Salesforce shelled out $6.5 billion for shortly after; and Kong, a venture-backed startup that recently raised $100 million at a $1.4 billion valuation.

Nestled within the broader API management segment is something known as API gateways, which have emerged as essential tools for bridging cloud apps and services. They serve as a unified interface for managing incoming API requests and connecting them to the correct destination while supporting functionalities across security, authentication, load balancing, and more.

While many of the popular API gateways are operated by commercial entities such as Google (Apigee), Salesforce (Mulesoft), and Amazon (it launched API Gateway back in 2015), KrakenD has been available under an open source license since 2016, allowing anyone to build robust API gateways. During that time, it has garnered a fairly impressive roster of users, including Oracle, eBay, and Nvidia, with 1.8 million servers leveraging the technology every month.

KrakenD is the result of four core developers, plus some fifty other contributors. KrakenD cofounder and CEO Albert Lombarte also cofounded a separate company called Brutale, which markets a commercial enterprise version of KrakenD.

The Linux Foundation, for the uninitiated, is a not-for-profit consortium founded two decades ago to support and promote the commercial growth of Linux and other open source technologies. The organization hosts various projects spanning just about every sector, including automotive, wireless networks, and security. Just last week, it launched an open source agriculture infrastructure project called the AgStack Foundation.

Although all these various projects have different users and use cases, they share a common thread — they serve specific industries with open technologies that aren’t tied to a single commercial company. They also typically attract strong buy-in from companies that are keen to avoid proprietary software or trying to develope their own rival proprietary software. This in turn creates a healthier ecosystem, with competing platforms and services.

KrakenD will continue to exist as it is today, but it’s now donating its core framework/library to the Linux Foundation — what will be known as the Lura Project. Its core mission is to offer an “extendable, simple, and stateless high-performance API gateway framework,” either for on-premises or cloud deployments, according to Lombarte.

“Rather than solving a specific use case, Lura provides a library of components, a framework for assembling them into custom API gateway systems like a Lego set,” Lombarte told VentureBeat.