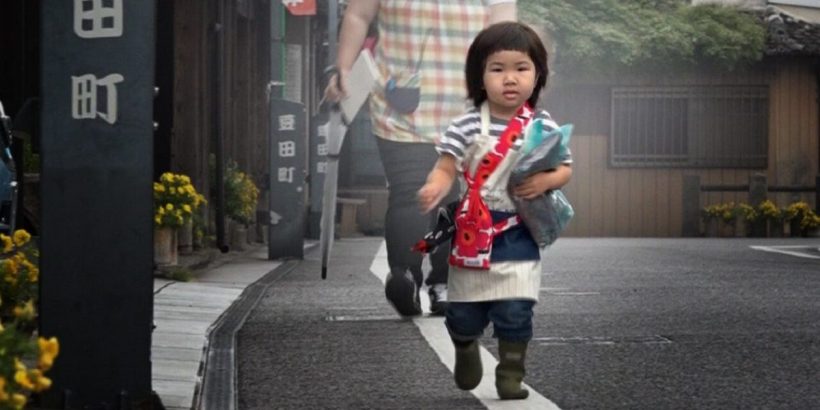 Old Enough! has a simple premise: make toddlers do tasks. The toddlers in question are usually aged between two and four years old, and have to run to the shops, pick up some dry cleaning, or otherwise aid their parents in a simple task to test their capabilities and independence. The Japanese TV show has just hit Netflix in the UK, and I am completely obsessed with watching a 10-minute slice of life as these toddlers do their utmost to impress their parents – or do the exact opposite.

Some children do well, picking up every item in order and returning home without issue. Some treat themselves to a can of pop en route, others struggle with the most basic tasks. It’s the latter group of toddlers – usually the youngest ones – that offer the most stressful yet compelling viewing.

The first child I want to highlight was helping his parents and grandparents pick Mandarins on their farm. His task was simple: navigate the way home and make some fresh Mandarin juice for their breaktime, using the juicer that he’s used many times before. However, that’s a lot to ask of an easily-distracted toddler. 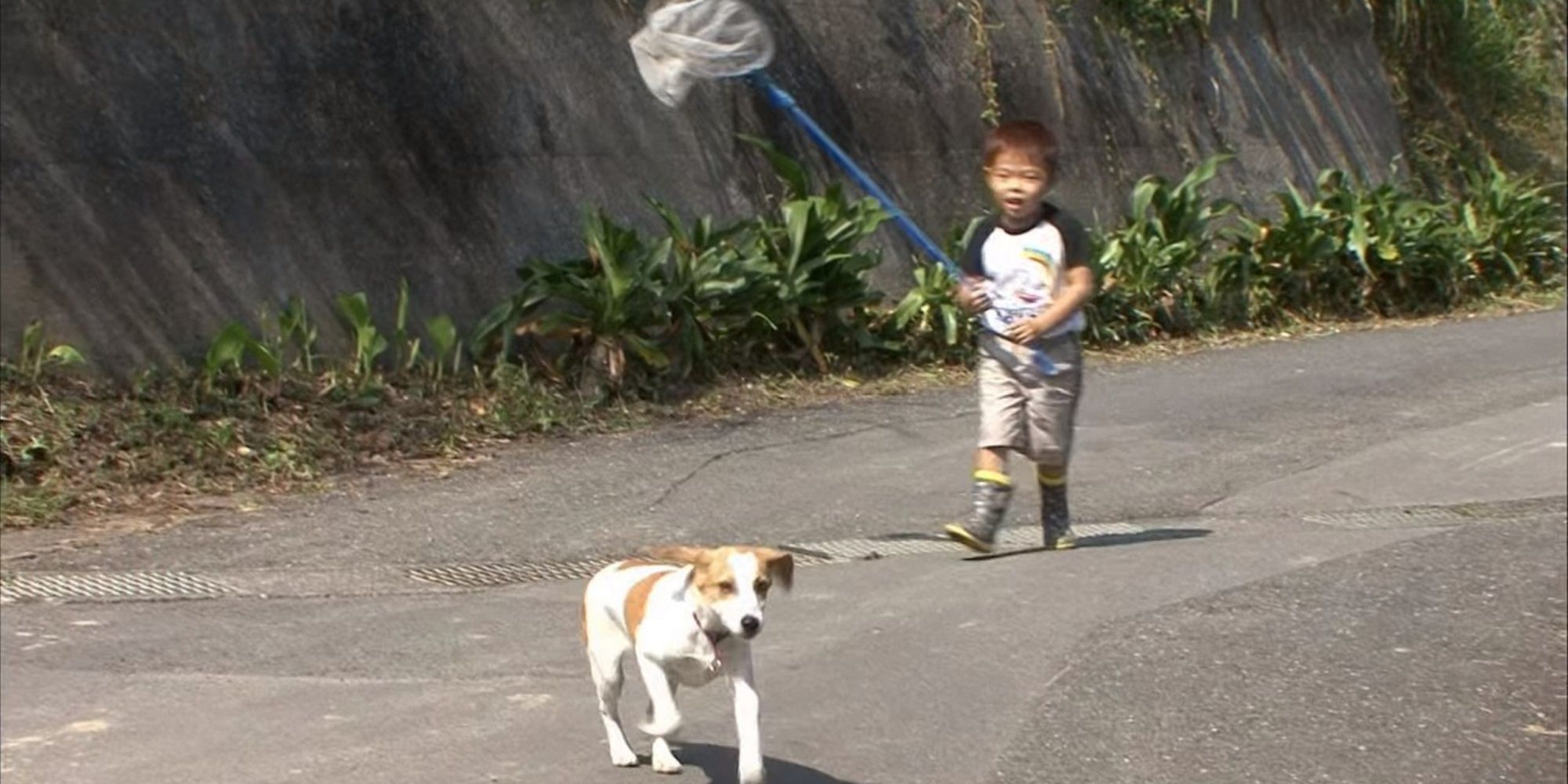 While most kids on the program are pretty obedient and try their hardest, this lil guy didn’t even try. He got home easy enough, but once he was there, he headed straight for the rice balls that were supposed to be saved for lunch. Then, he headed back outside to play with the local dog.

This child played with that dog for three hours, while the adults waited for their refreshments. I can’t say I blame him, but I would have been mightily pissed off if I was working hard in the blazing sunshine and the child who was told to bring me a lovely glass of juice seemingly disappeared.

Eventually, after his mam called home a couple of times to check up on his progress and give him a stern word, he brought the adults a thimble of juice each. Better than nothing, I guess, but I wouldn’t have been congratulating him as much as they were, that’s for sure. However, things never go entirely to plan with toddlers, even if they embark with the best intentions. 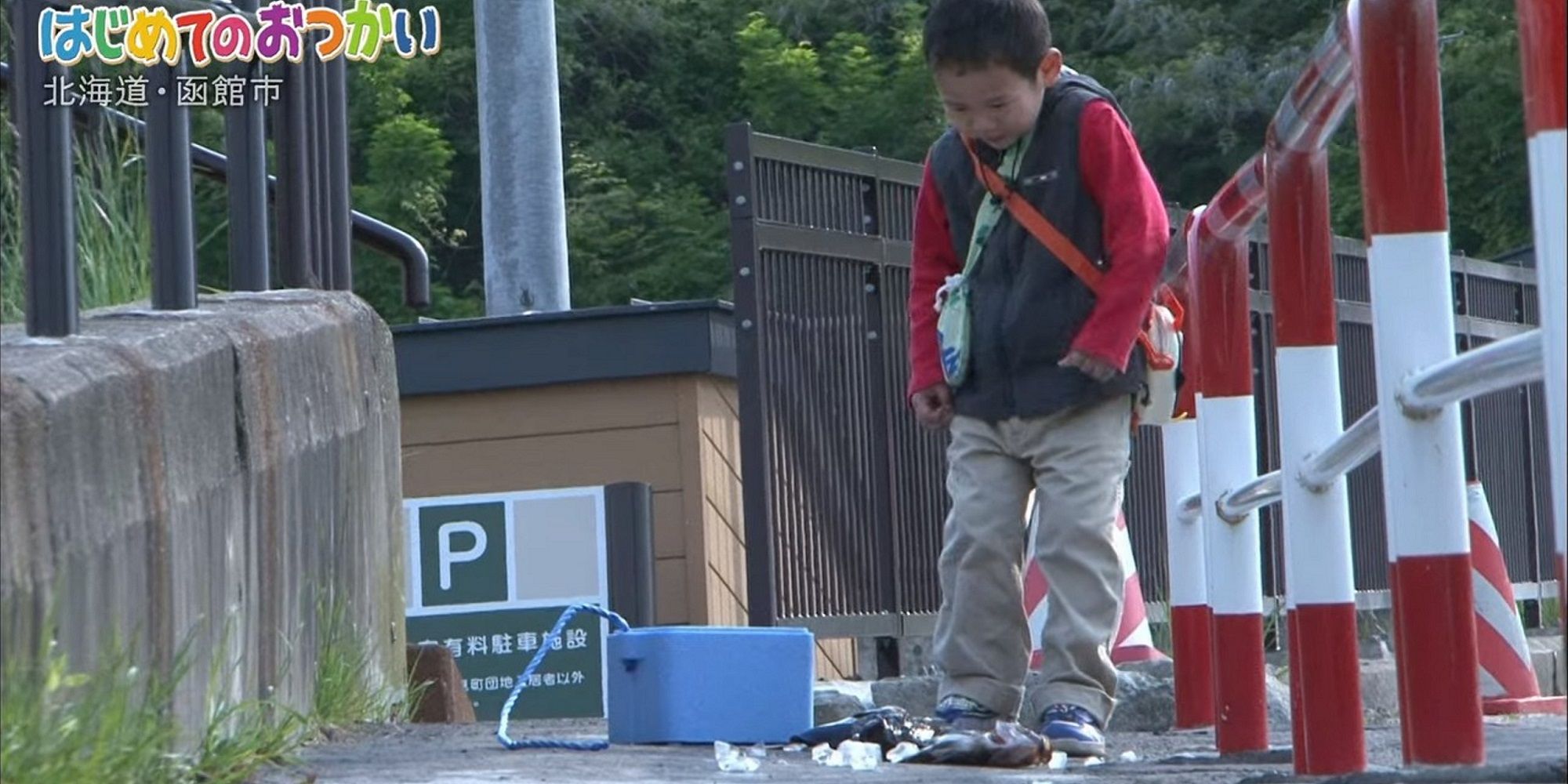 Another child’s task was to take some fish that his dad had caught to the fishmongers, who would carve it into sashimi. Despite sashimi being this child’s favourite food, he was scared of the freaky fish his dad had caught, and I can hardly blame him. The large, slimy creatures were placed into a polystyrene box for him to carry down a steep hill to the fishmonger, but that didn’t last long.

The knot on the cord holding the box came undone, and fish and ice cubes spilled all over the street through no fault of this poor child. He’d walked only a minute, maybe less, out of his front door and he was faced with a predicament. Handle the scary fish, or go home to mum. Or cry. He tried a couple of times to grab the fish, but couldn’t bring himself to do it. He tried using sticks as grabbers, which obviously didn’t work either. At least he was being resourceful. Eventually he built up the courage to grab the fish by their bellies and lift them back into the box, but only because a local cat had rounded the corner with its eyes set on a fresh fish supper.

Despite his mum’s insistence from the window of their flat above that he knew how to tie a knot, he asked a stranger for help tying it. Success. However, a few minutes later and just around the corner from the fishmonger, it snapped again. This time though, he picked the fish straight back up and popped them into the box. I felt proud of this toddler who isn’t mine, who I have never met and have only seen on my screen for five minutes at most. He’d done good, and it seemed like he was overcoming his fear of fish. 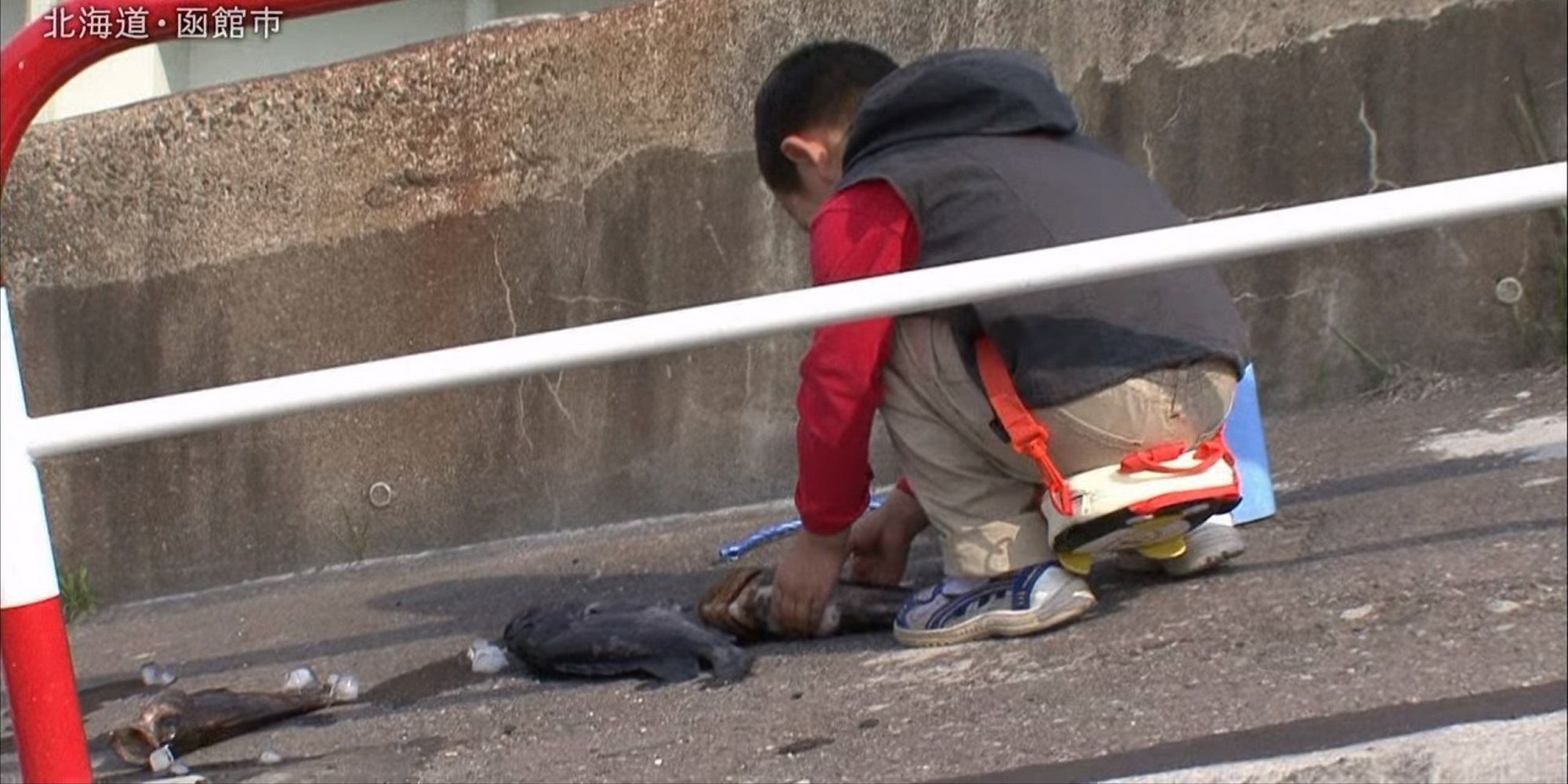 He abandoned the cord and made it to the fishmonger, where he covered his eyes as the fish were gutted and masterfully chopped into sashimi. On his way back, he bought two apples for his infant sister, for whom they would be mushed up as one of her first tastes of real food. Here, however, he came to another problem.

Halfway up the hill to his house, he set his bags down for a moment of respite. Reader, you know what’s coming next. The apples fell out of his carrier bag and rolled all the way down the hill. He ran after them, collected them, and set off up the hill again. Only, he paused another time and, reader, the apples rolled again. All the way down. I was amazed he wasn’t in tears – I would have been bawling by now. 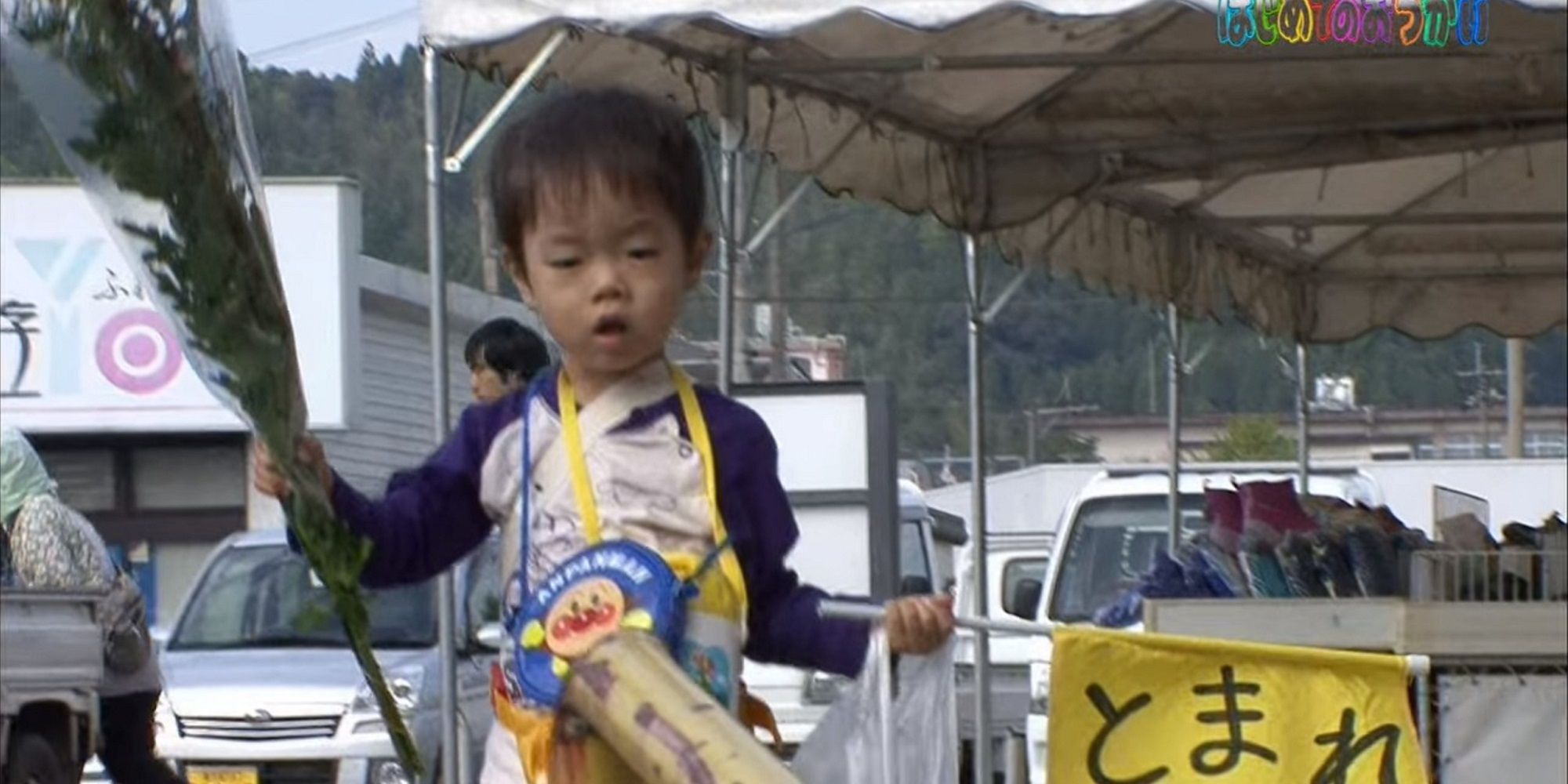 At this point it’s worth pointing out the safety measures in place to keep the toddlers safe when wandering on their own, crossing busy roads, and interacting with strangers. Obviously a camera crew follows them closely, and they carry a small satchel that appears to contain a microphone so we can listen in on their interactions. There are times when the camera zooms out to a wide shot from afar – to emphasise the magnitude of this simple walk to the shops for such tiny legs – and that’s when I begin to worry. There doesn’t seem to be anyone in close proximity to the child at this point, and whether they’re climbing up steep steps or walking along a busy road, I fear for their safety.

However, when the little fish boy dropped his apples for the second time, the crew pulled them out of the middle of the road and left them on the pavement for him. He still had to walk all the way down the hill again, but didn’t have to wander onto the road to grab them. I’m not sure what the safety protocols are for Japanese television, but it seems there are some rules, at least. 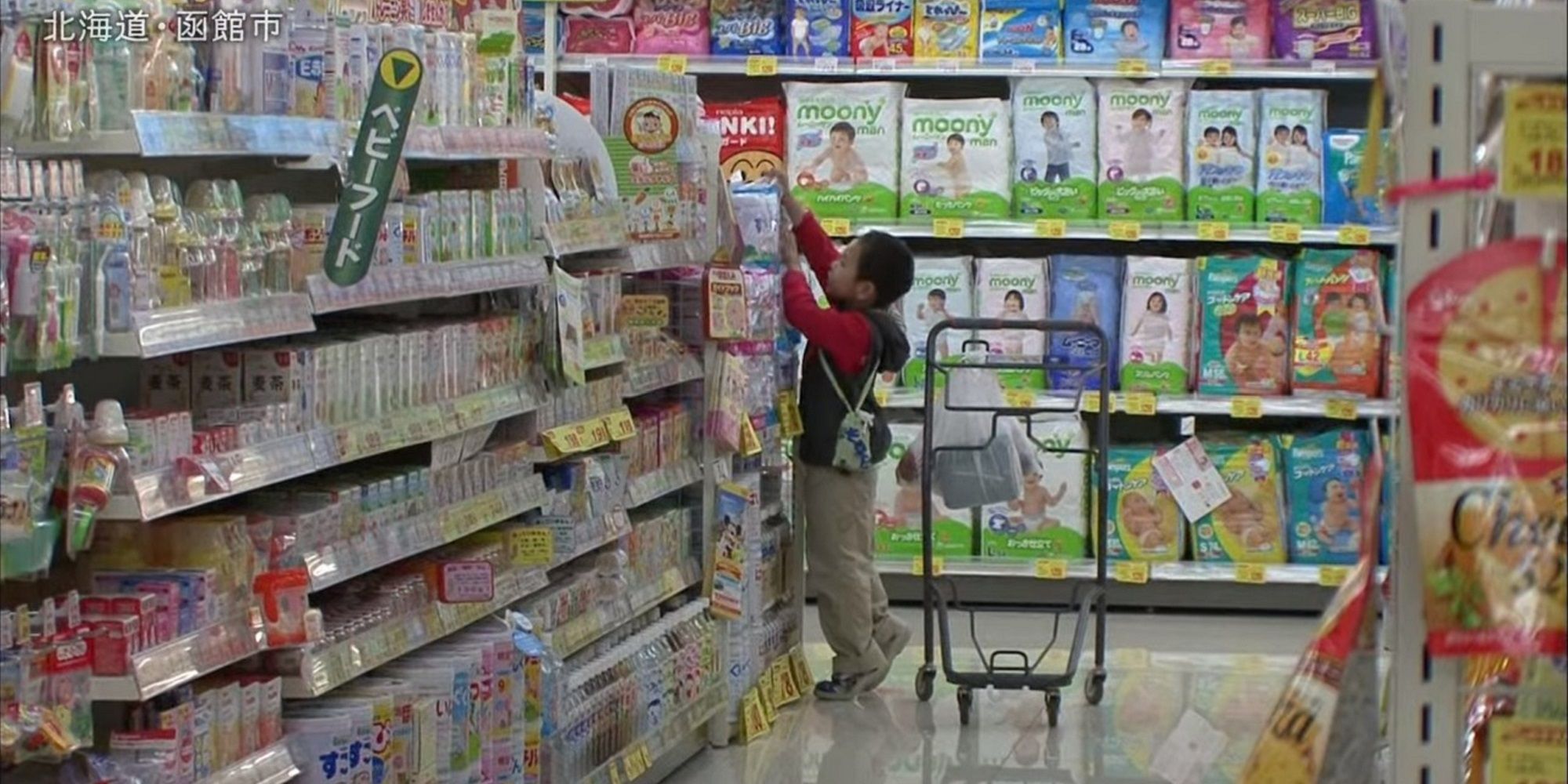 There are less eventful errands, and toddlers that do exactly what they’re told, but the episodes with the most peril are the most fun. The 10-minute episodes are perfect bite-sized chunks, never lingering too long on one obstacle or challenge. We get a couple of shots of the parents looking all worried at the start and end, too, but generally we don’t hear a lot from them over the course of the series. The children are the stars. Maybe it’s because Old Enough! has been going since the 90s, or maybe it’s a cultural difference, but I can guarantee that it would be co-opted by fame-hungry parents if a UK version was made.

I can’t really explain what it is about Old Enough! that is so compelling. Part of it is a nostalgia for wholesome 90s TV, even though I never watched this show in particular. Part of it is watching toddlers overcome the same challenges that we do every day. Yes, sometimes it is hard to motivate myself to do something as simple as going to the shop for bread; it doesn’t get any easier, kids. But most of all, Old Enough! shows regular people doing regular things and the challenges of everyday life. Even though they’re toddlers, there’s a comfort in that, and it’s something that modern reality TV fails to recreate.