It would be obvious to refer to Observation as “2001: A Space Odyssey: The Game”. In fact, that’s how developer No Code has described it itself. But in truth, this sci-fi thriller melds so much more than that together: Alien’s constant sense of dread and labyrinth of claustrophobic corridors; Solaris’ emotional core and haunting ethereality; and Interstellar’s sheer desperation and explosive moments. All of these combine to create a gripping story that’s threaded around a series of cleverly designed puzzles to create a truly unique gaming experience.

Observation casts you as SAM (Systems Administration and Maintenance), the omnipresent AI of the titular space station. First impressions suggest that the station is abandoned apart from its lone occupant, Dr. Emma Fisher. It quickly becomes apparent something extraterrestrial has been at work, and figuring out what has happened is your first step. It’s a captivating setup, as you endeavour to find out how your mission has taken a turn for the worse.

Almost every meaningful interaction comes through the UI. Doors aren’t unlocked by hand, but in system menus. Extractor fans aren’t flicked on at a switch, but operated by creating a system link from a nearby camera. This is perhaps unsurprising as Jon McKellan, Observation’s director, was the chief UI designer for Alien: Isolation, but those concepts have been expanded upon here, with slick text displays where many of the objectives are tackled.

Almost every meaningful interaction comes through the UI.

The method for solving each puzzle is provided as a scanned document or analysed schematics obtained while exploring the environment. It’s then up to you to work out the specific solution to the task, using everything you’ve learned while steadily drip-feeding new ideas into your memory, in many ways mimicking how an AI learns over time. It’s a storytelling mechanic, too: as you find new technical information around the space station, gaps in SAM’s memory core start to fill.

While the plot is intriguing, and drives Observation along on at a good pace, there’s plenty of calm amid the chaos. You are encouraged to explore each of the station’s former inhabitants’ living spaces to find out more about them and their lives, leading to quiet moments of smaller scale drama. Imagine being able to hit the pause button on the Nostromo and comb through Kane’s diary – that’s the kind of backstory insight you get from these documents and voice recordings. All of these intertwining personal stories and relationships layer on top of each other to help build atmosphere, which is something Observation offers in abundance.

No Code’s previous outing, Stories Untold is rooted in atmosphere and Observation is no different, stepping things up in the visual department to aid that feeling. The snaking corridors are dressed in glistening metal and glossy plastics. Designs and blueprints of the ISS (International Space Station) currently orbiting our Earth have been pored over in the creation of the Observation, and it really shows. The level of detail is astounding, managing to balance the hard-edged, clinical nature of the vessel with lived-in human touches. Clothing and equipment float against the pearly white walls that mirror the central clash of man versus machine.

The level of detail is astounding, managing to balance the hard-edged, clinical nature of the vessel with lived-in human touches.

The sound design is exquisite. The clanging of distant metal and perpetual hum of machinery is punctuated with stabbing moments of bruising, electronic cacophony. The title credits are soundtracked by a superb pulsating score composed by Nine Inch Nail’s Robin Finck. The cast of characters are voiced solidly as a whole, but the leads are truly the standouts. Kezia Burrows’ believable and emotive performance as Emma Fisher contrasts beautifully with the voice of SAM – Anthony Howell’s performance is deeply (and purposefully) reminiscent of 2001’s H.A.L – and I found myself triggering extra voice lines just to hear interactions between them.

One area of presentation that doesn’t quite stand up to the standard of fidelity Observation sets elsewhere is the human character modelling. Lip syncing isn’t quite up to scratch and looking into Dr. Fisher’s eyes occasionally feels like staring into a black hole. It’s a shame the fear and desperation so often conveyed in her dialogue are rarely, if ever, displayed on her face. Similarly, characters can look stiff moving through the environment, clashing with the polished look of the station’s interior design. Thankfully, it’s an issue that doesn’t occur too often – you interact far more with the station’s systems than the human life that occupies the spaces in between.

There are a variety of observation tools at your disposal, from dozens of CCTV-like cameras placed around each of the station’s many modules to the more liberating drone spheres SAM can possess. These enable you to explore more freely, even outside of the ship, and to float around its expansive exterior. The space station is an overwhelming beast at first, especially when it first opens up after the tutorial, but it soon becomes familiar and I found I wasn’t relying on the map as much as I progressed through the six-hour campaign. However, there were times when found myself getting a little disoriented, especially when probing around the outside of the vessel, where no map is available. An early moment took me far longer than it probably should as I spun myself in the wrong direction and lost my bearings while trying find a damaged part of the station.

Think of it more like building a piece of furniture as opposed to completing a crossword.

While the scope of infinite space provides its backdrop, the focus of Observation’s puzzles is relatively small in scale, but they are nevertheless engaging. It brilliantly succeeds at morphing what could easily be dull, scientifically grounded tasks into cerebrally pleasing puzzles. These range from testing your memory when attempting communication to racing against the clock to input all of the correct commands when dealing with a fire. Although few present much of a challenge, they’re undoubtedly effective at making you feel a participant in the story as opposed to an onlooker. Think of it more like building a piece of furniture as opposed to completing a crossword. But what’s clever about Observation is the thought process for even a simple task is more complex than you’ll find in most games.

Take operating a hatch. As SAM, you must first find a laptop before creating a connection to it. Next, you must obtain the hatch schematic for that specific part of the station before interacting with the hatch controls. This isn’t straightforward either – each action you’re able to perform has a corresponding pattern, which you must input on a 10×10 grid to execute. It’s drawn out but consistently captivating, transforming what could otherwise be a simple gameplay process into something more involved. 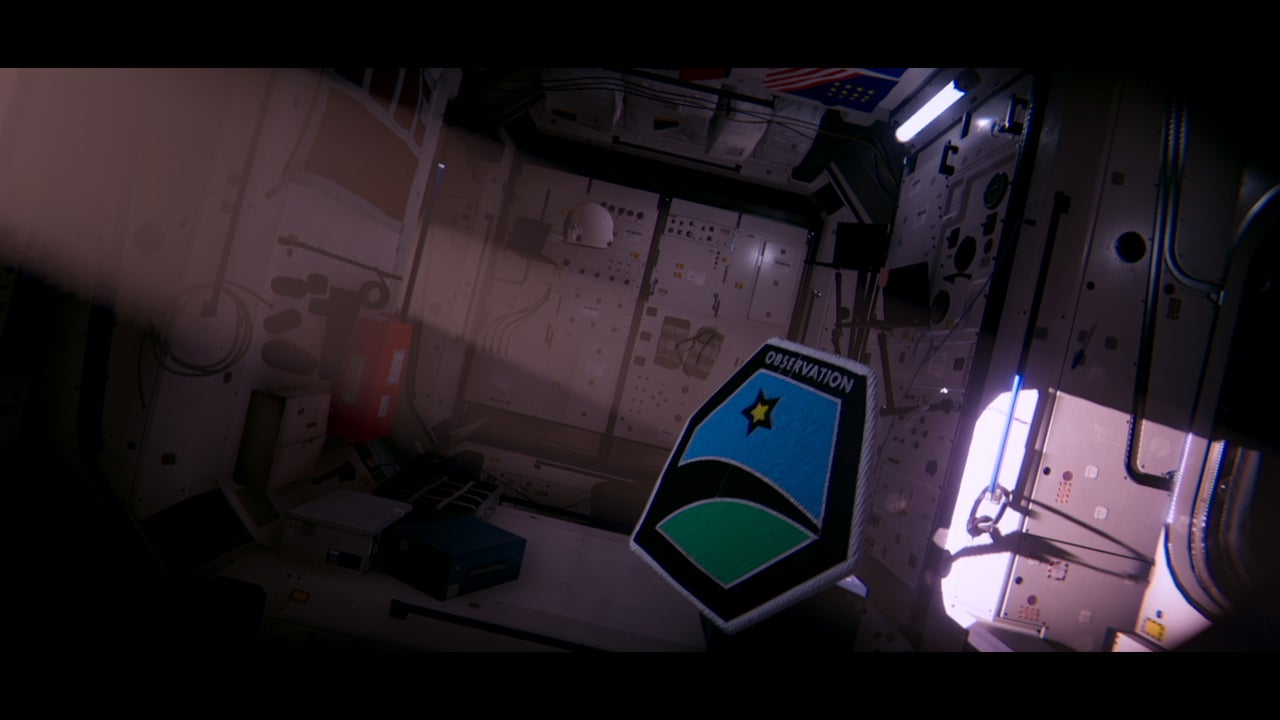 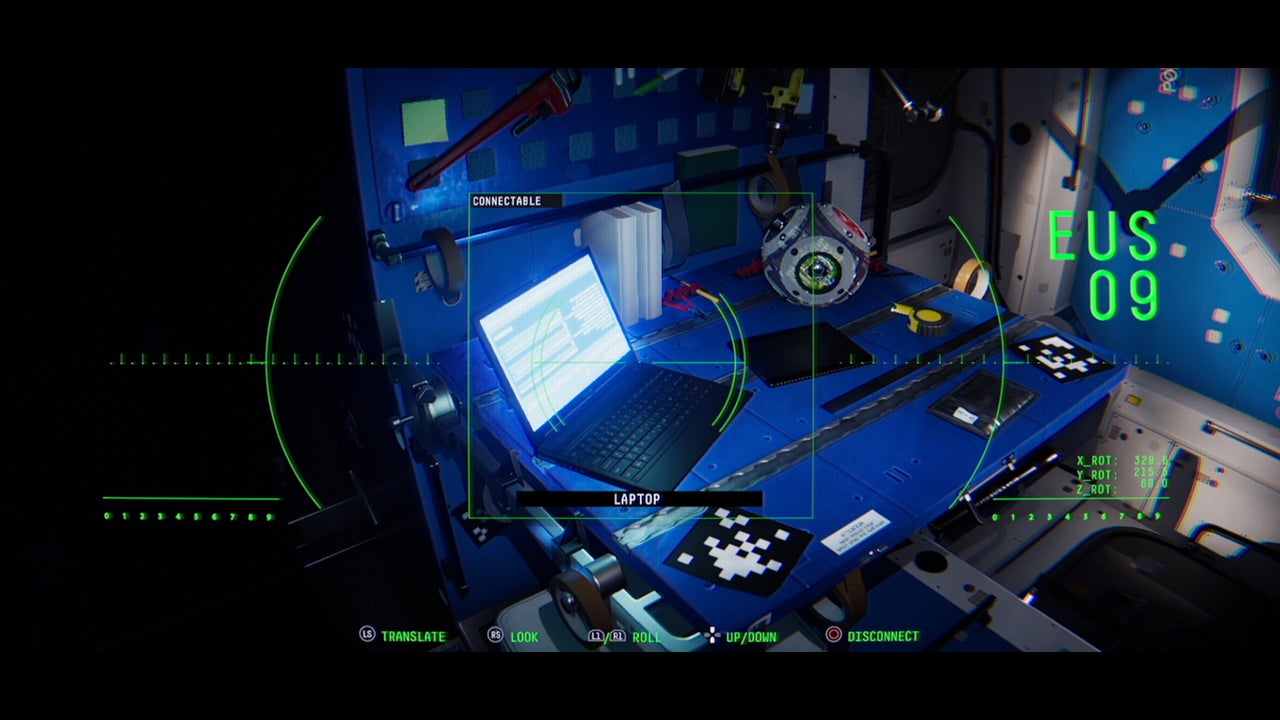 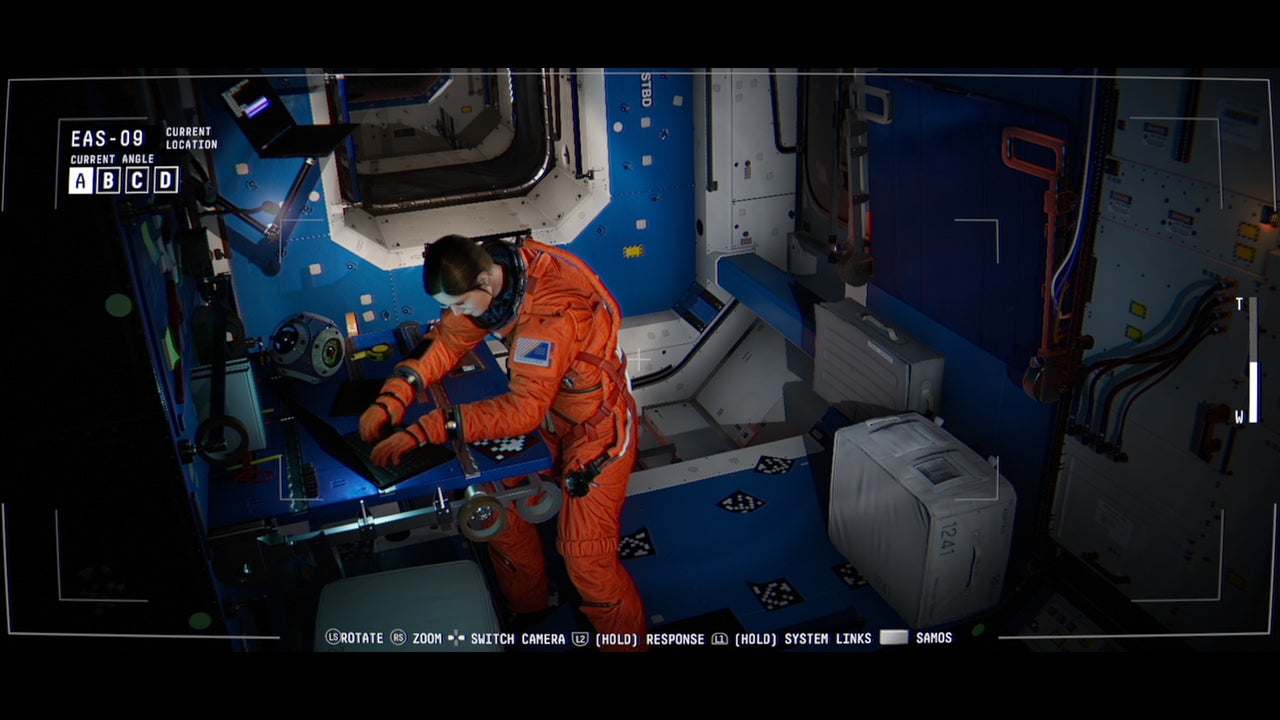 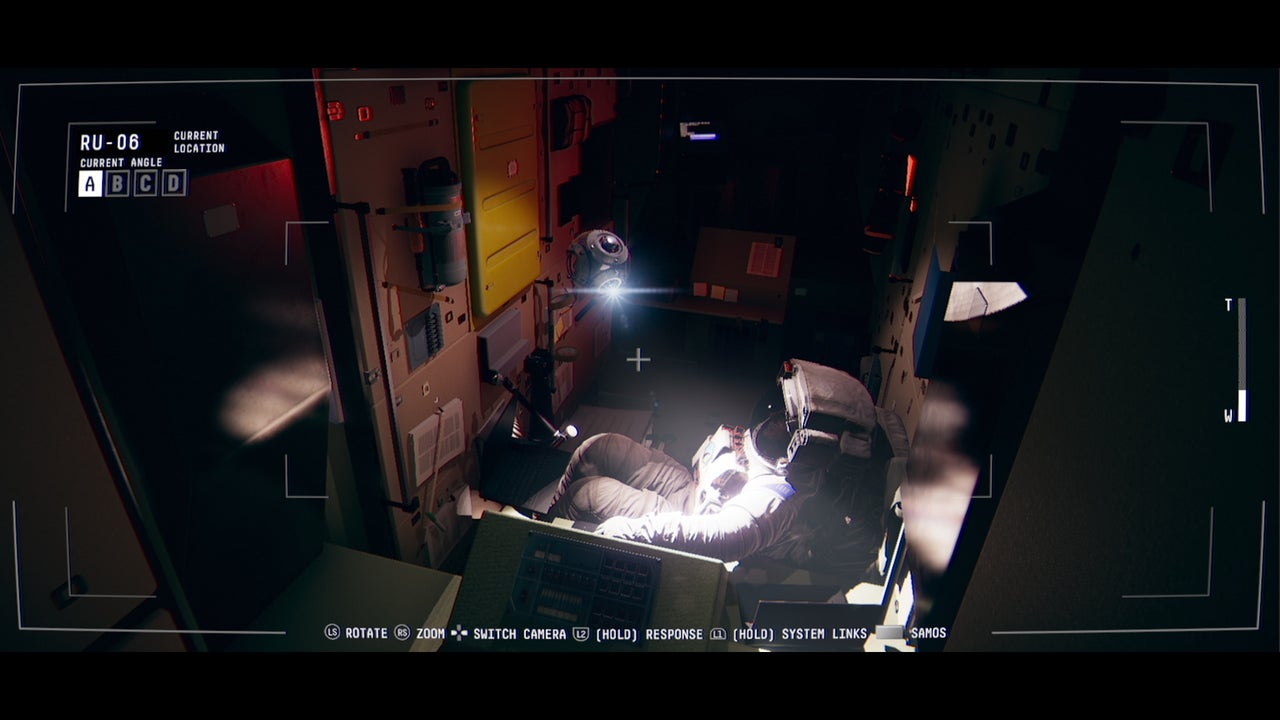 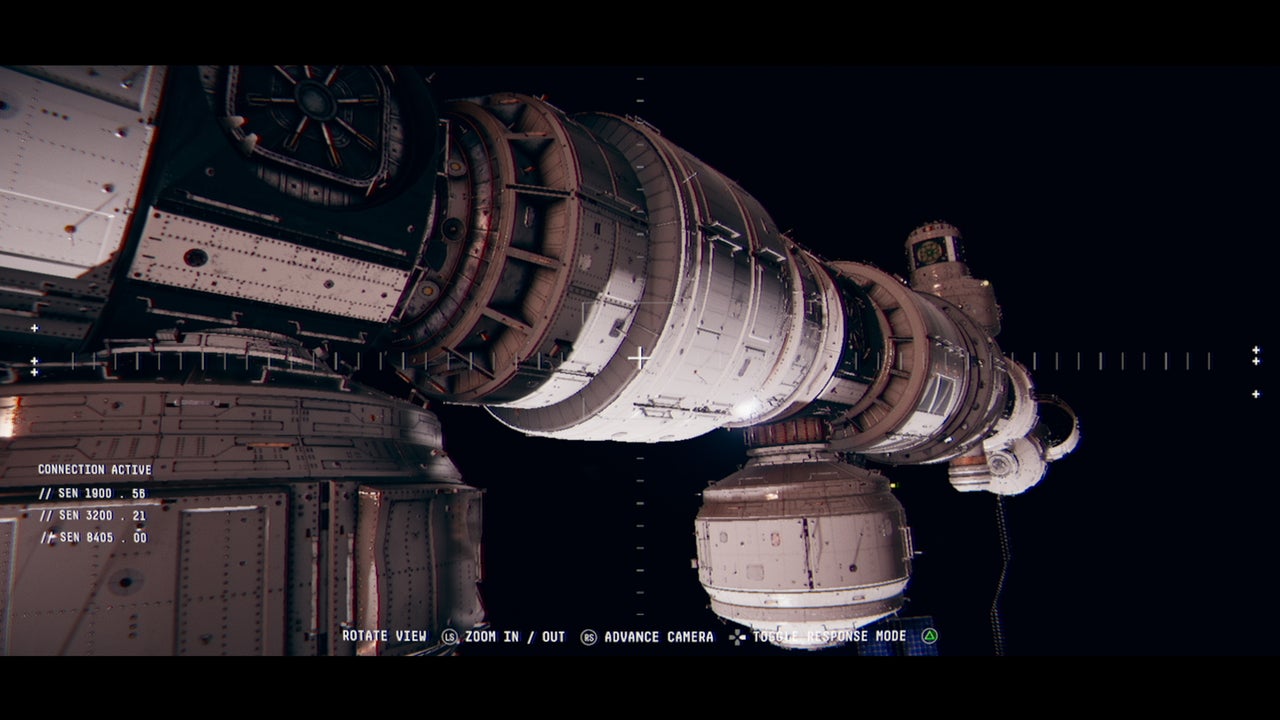 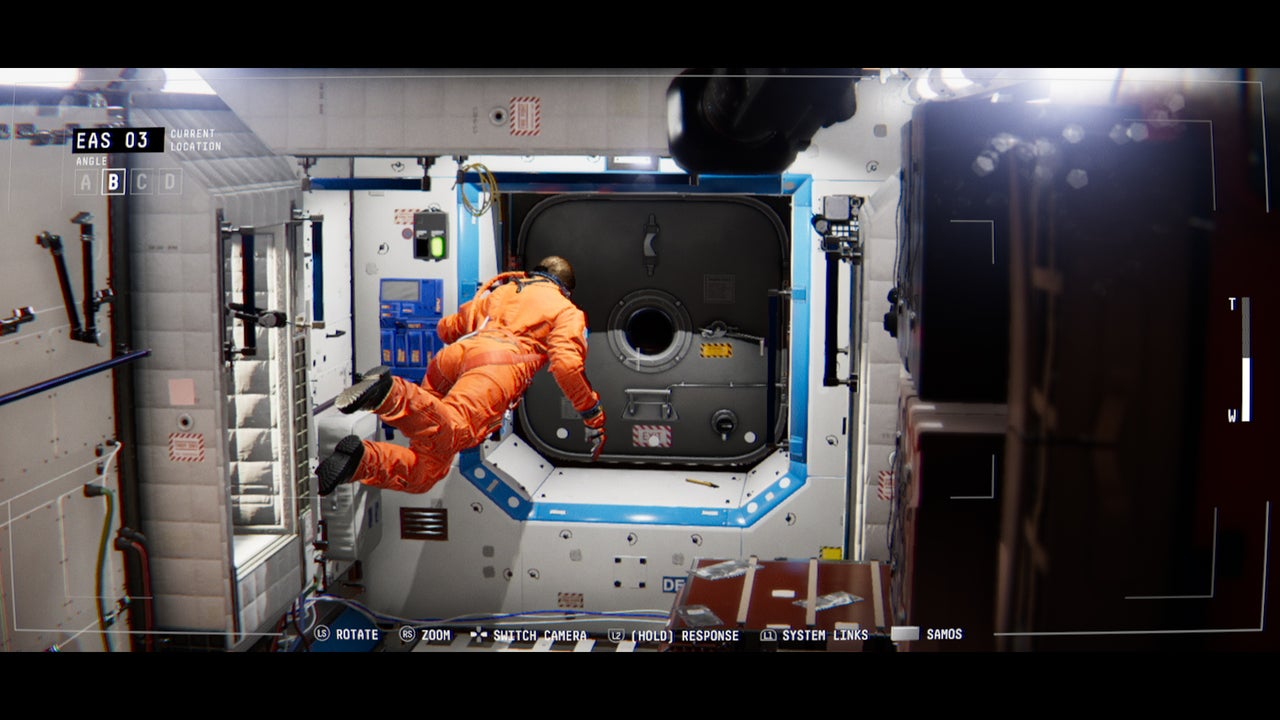 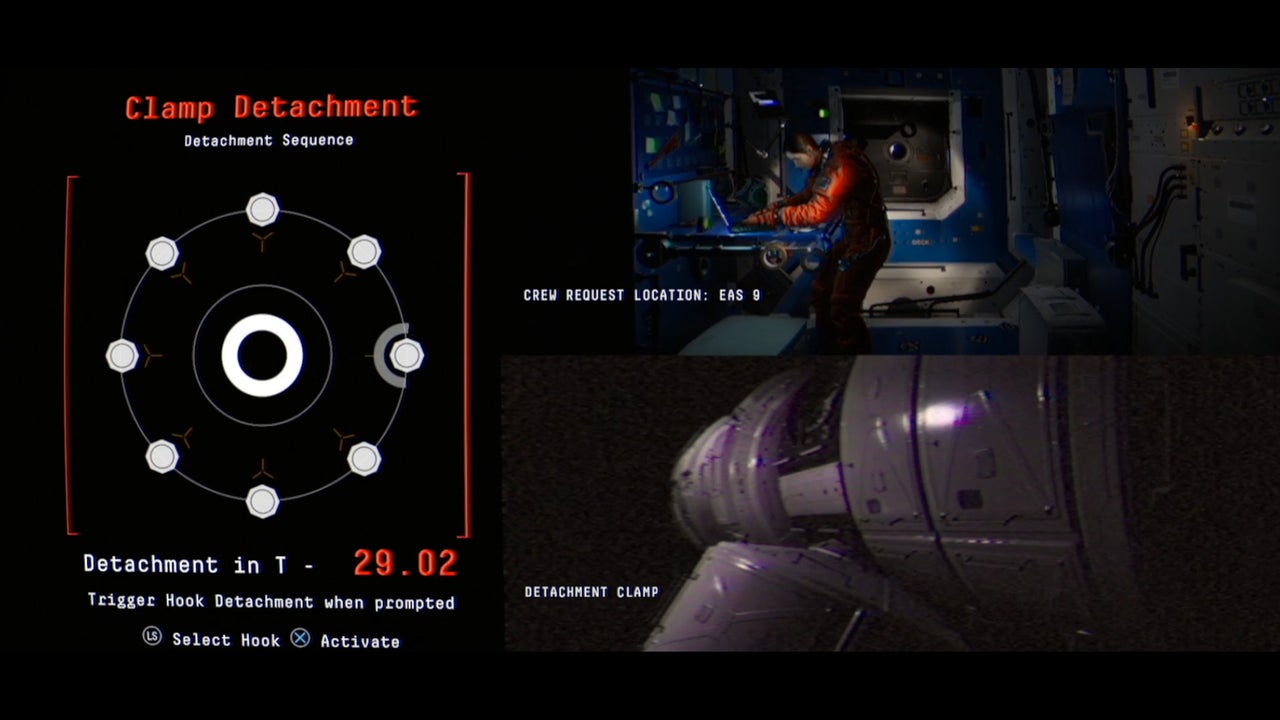 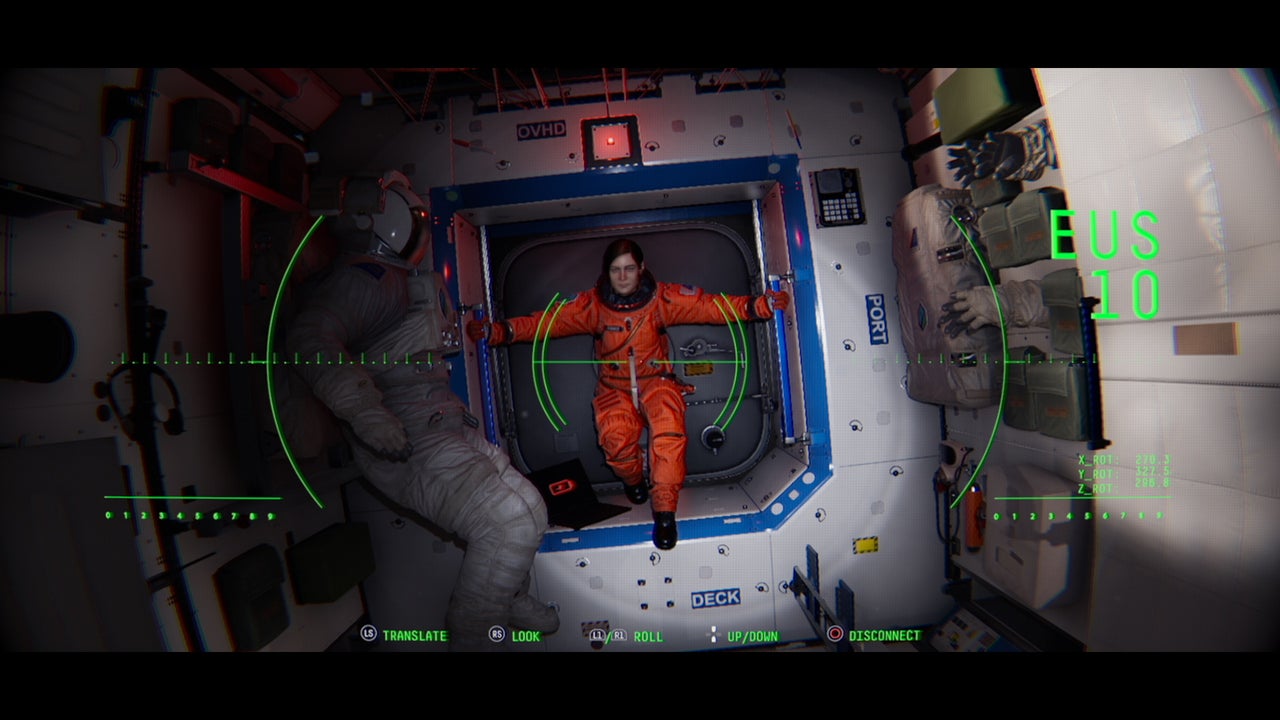 You’re encouraged to explore SAM’s OS and become familiar with how to tackle each of these simple problems, and I found myself becoming more efficient each time I encountered one. A minor gripe is the complexity of puzzles never really scaled with the heightened stakes of the story as it progressed towards its conclusion. I never really got stuck on a problem for any length of time, and it’s a little underwhelming to find yourself doing puzzles at the end that are so similar to what you did at the start.

This isn’t necessarily to the detriment of Observation overall, though, as it’s the compelling storytelling that ultimately shines through. So many high-concept science-fiction stories stumble trying to provide a satisfying ending to an ever-changing plot. While some thought Stories Untold, suffered from a rather heavy-handed conclusion, Observation’s finale is elegant. The last 20 minutes bring together everything you’ve seen and learned in an emotionally grounded, visually spectacular denouement.

Observation is a smart, original science fiction story propelled by its novel approach to puzzle design and stunning attention to detail. So often, an experience like this can struggle to find the balance between challenging gameplay and a captivating story, but Observation doesn’t suffer from this, and the compelling plot is never halted by frustratingly obtuse conundrums. It simply doesn’t deal in obfuscation. Instead, it’s beautifully signposted without feeling clumsy, driving you through its labyrinth of hallways, and a story that grips from start to finish. All of these components combine to craft a chilling high-concept tale that nails the landing and fully accomplishes what it sets out to achieve.