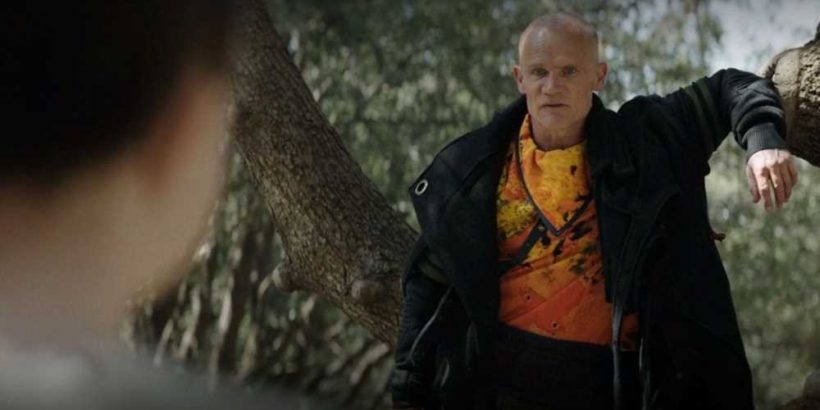 Spoilers for the first three episodes of Obi-Wan Kenobi below.

In the first episode of Obi-Wan Kenobi, one action scene was so puzzlingly staged that a friend of mine began reaching for a lore explanation to try and make sense of it.

"Are they just not used to the planet's gravity or something?" he wondered.

The scene in question occurs toward the episode’s conclusion when 10-year-old Princess Leia runs into the forest behind her family's skyscraping Alderaan home. Almost immediately after arriving in the woods, Leia is confronted by a menacing stranger with a buzzcut played by Red Hot Chili Peppers' bassist, Flea.

"Why are you here?" Leia asks.

Flea snarls, "For you." Leia looks to escape but quickly realizes she is surrounded. She runs anyway. Flea's teammates immediately give chase, but he watches her run for a solid beat as if giving her a head start. We then see Leia running about as fast as you would expect a kid with stubby child legs to run, but the grown adults behind her can't keep up. The one on the right even looks like they're running slowly on purpose, legs in a waddle like Ellen Degeneres dancing over a coffee table. 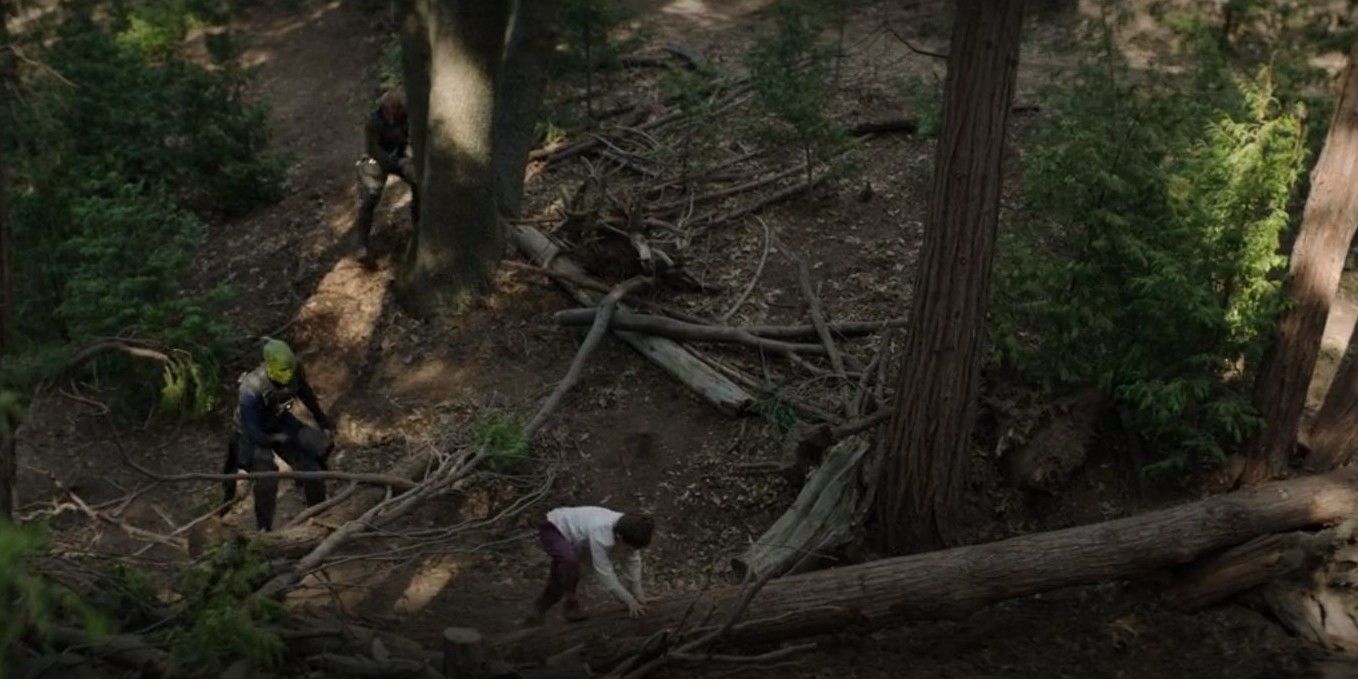 When Leia slides under a small, waist-level branch, one of the henchmen decides to go around instead of following her despite it seeming, to this viewer at least, like it would be easy to step over it. Leia then ducks under another branch, which a henchman, despite having plenty of time to react, runs straight into Looney Tunes-style. As she scrambles up a hill, one of her pursuers falls flat on their face. Then, when Leia makes it to the top of the hill and catches sight of an Organa family bodyguard, Flea shoots the guard and the henchmen finally catch up. They throw a bag over her head and kidnap her.

The entire sequence is shot, as my friend noted, like Leia’s pursuers are getting acclimated not just to gravity, but also to the act of walking.

In the next episode, series director Deborah Chow repeats the same trick. Convinced to come out of exile by Leia's adoptive father, Bail Organa, Obi-Wan Kenobi tracks Leia to the neon-lit metropolitan planet of Daiyu. After rescuing Leia from Flea and the gang, Obi-Wan and the young princess attempt to escape the planet while carefully evading the Inquisitors patrolling the streets. Leia is skeptical of Obi-Wan and, when she sees a hologram of the reclusive Jedi projected on a bounty hunter’s device, she decides to make a run for it. 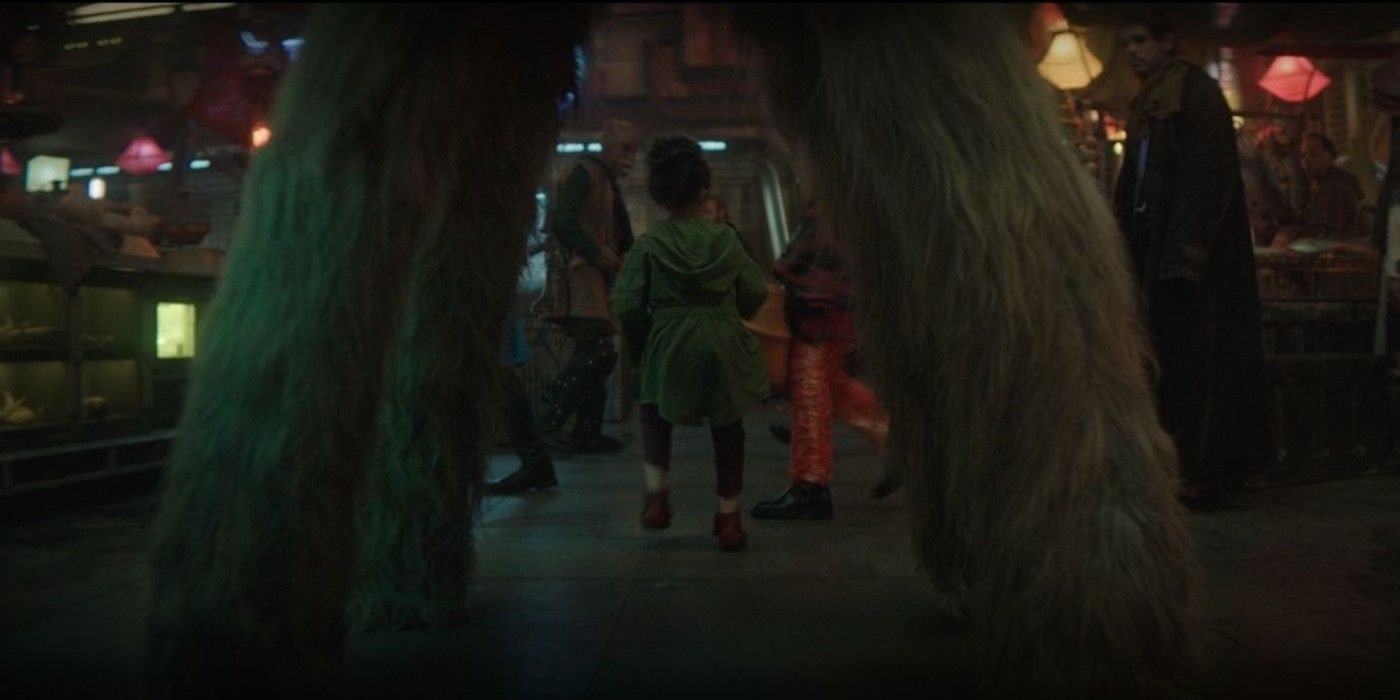 This chase is slightly better than the first, largely because the marketplace that Leia escapes into gives Chow more interesting set dressing to work with. Leia ducks under a display shelf and the camera swoops down to follow. She runs between the lanky legs of a creature that looks like a cross between a polar bear, sloth, and alpaca. She emerges into an area where insectoid creatures are being kept in tanks and we’re treated to close-ups of their carapaces. Through this chase, the camera is often close to Leia’s face to communicate a sense of jangly speed, but whenever we see her in a wide shot we can tell that she’s jogging at a pretty leisurely pace. Obi-Wan meanwhile is walking painfully slow and is halted further by shoppers walking in front of him, ostensibly because he doesn't want to draw attention to himself — though that doesn't stop him from yelling "Leia!" approximately 36 times throughout the scene.

After some bounty hunters attempt to capture Leia, any attempt at secrecy goes out the window as Obi-Wan quickly dispatches one with a loud shot from his blaster. Slowed down by the scuffle, Leia barely escapes Obi-Wan's grasp. But, when we see Obi-Wan next, Leia is halfway up a ladder leading to the rooftops with him trailing 20 to 30 feet behind. Eventually, after exchanging blaster fire with more bounty hunters, Obi-Wan catches up with Leia as she attempts to jump to another roof and falls, forcing Obi-Wan to use the Force powers he’s been hiding. Obi-Wan gently sets her down on the ground below, and in the few seconds it takes for Leia to sit up, Obi-Wan has somehow descended from the rooftop to ground level.

Did he use an unseen ladder to quickly reach Leia's position? Sure, maybe! But the show is so deeply unconcerned with establishing any sense of place that, when Obi-Wan suddenly appeared, I laughed. There is an elasticity to the way Obi-Wan Kenobi uses space that makes it difficult to ever feel like the show is establishing a consistent reality. If Obi-Wan needs to be close to Leia for a plot beat to work, he’ll be close. If he needs to be far, he’ll be far. It reminds me of the complaints fans leveled at the seventh season of Game of Thrones. After years watching a show where a journey across Westeros could take several episodes, characters were suddenly zipping across the country in minutes. Obi-Wan Kenobi has the same problem on a micro-scale. The logic governing action scenes seems to change from shot to shot. If Obi-Wan needs to be somewhere because the plot dictates, he will be there — geometry be damned. 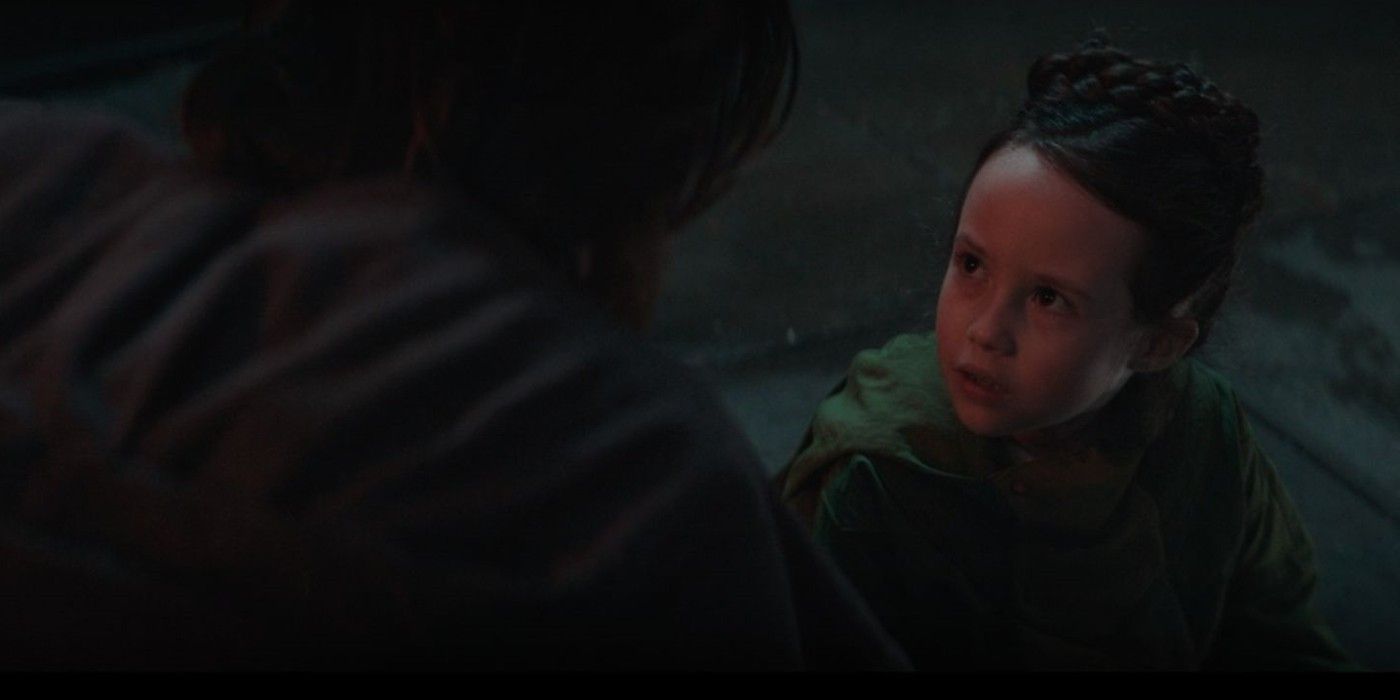 The problem continues into the most recent episode as Obi-Wan and Darth Vader finally come face to masked face. After Obi-Wan uses the Force to spill a flammable substance across the ground between them, Vader touches his lightsaber to the spill, igniting it, then uses the force to throw Obi-Wan into the flames. It's a visual reenactment of the moment when Obi-Wan left Anakin for dead on Mustafar at the climax of Revenge of the Sith and, given Vader's dialogue — "I am what you made me… Now you will suffer, Obi-Wan. Your pain has just begun." — it is as self-conscious a recreation for Vader as it is for the showrunners.

For some fans, the capital M Moment of it all may make the logic of the scene's staging irrelevant. But, the staging is still bad. After Vader causes the flames to dissipate so he can send a Stormtrooper to retrieve Obi-Wan, Tala — an Imperial double agent who helps Obi-Wan and Leia earlier in the episode — shows up and shoots the Stormtrooper. Before the remaining troopers can fire on her position, she shoots an electrical box, causing the spill to go up in flames again. With a seemingly impassable gulf of fire between Obi-Wan and Vader — a Stormtrooper shouts, "There's no way around!" — Tala and a loader droid rescue Obi-Wan. This escape is apparently so perfect that in the next scene Fifth Brother, one of the Inquisitors on Obi-Wan's trail, complains, "Now we'll never find him." This dialogue in and after the scene feels like an attempt to paper over the logic of Obi-Wan's Houdini moment. On one side of the fire is a cliff which Tala easily descended from. On the other is a rocky mound not much steeper than the hill Leia climbed to escape Flea's gang. Even if there wasn't any space between the machine that Tala shot and the mound, a Stormtrooper could easily slide along the hill to reach Obi-Wan. And that's ignoring Force powers — Vader threw Obi-Wan into and out of the fire, but somehow can't use the Force to retrieve him from the other side? An episode ago we saw Obi-Wan descend from the rooftops to the street in seconds without explanation. The obstacle here doesn't seem any more difficult to overcome. 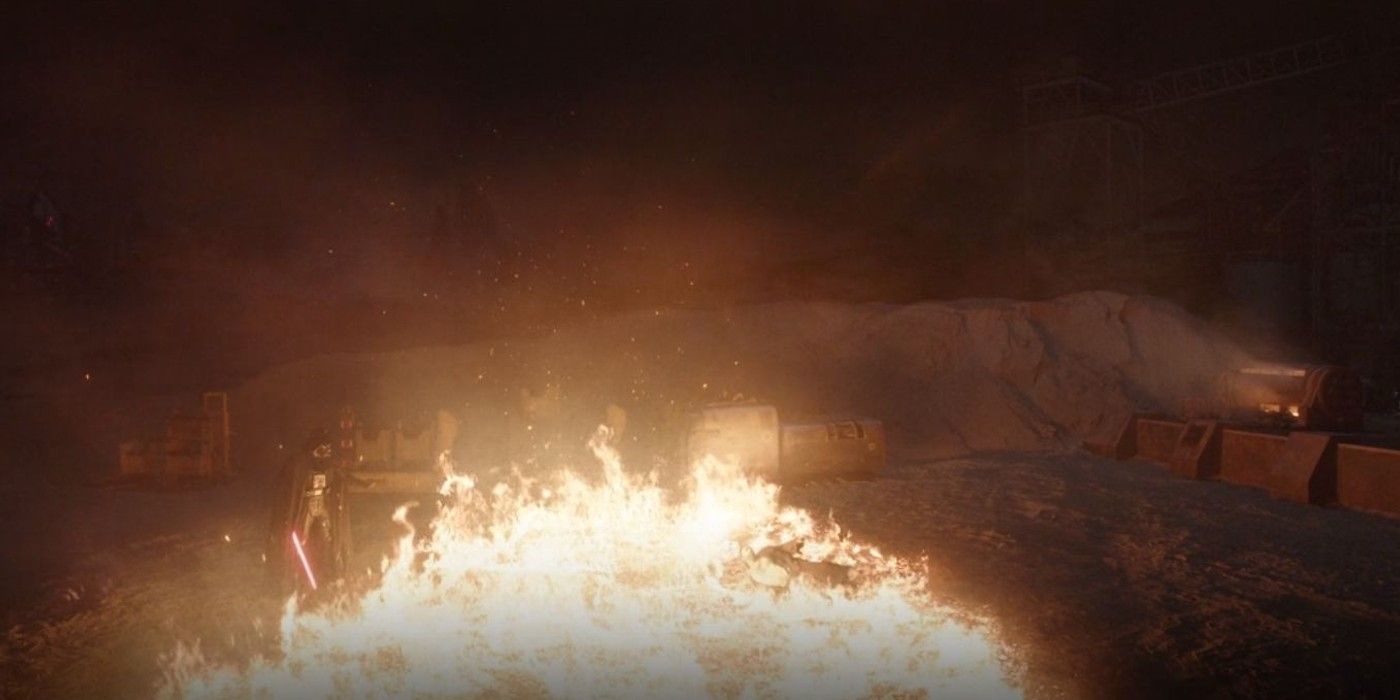 Though I'm focusing on minutiae, my objection isn't to CinemaSins-style plot holes. "Leia is kidnapped and Obi-Wan must leave his exile to rescue her," "Leia doesn't trust Obi-Wan and runs away, endangering herself and prompting Obi-Wan to use the Force," and "Darth Vader wounds Obi-Wan, but Obi-Wan escapes with his life" are good enough beats and I don’t have an issue with the logic that leads from one to the other. Obi-Wan Kenobi's problems have little to do with plot. Instead, the miniseries is hamstrung by the fact that these moments are so inelegantly staged that they jolt us out of the reality it is attempting to create. They leave us searching for a deeper explanation than the apparent lack of craft.