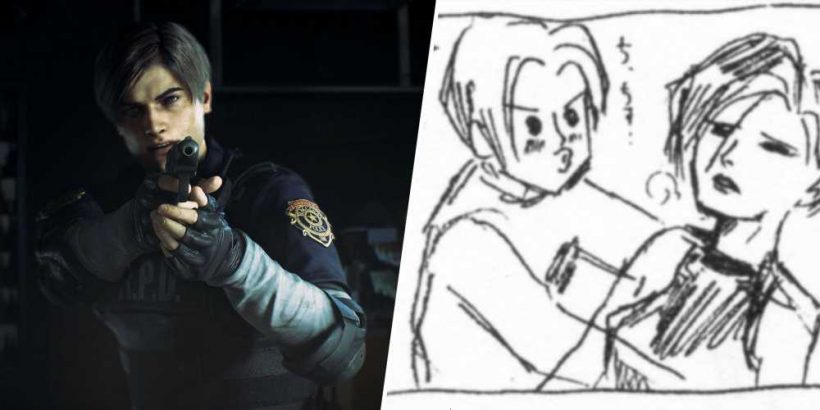 There's a lot that goes into making video games that we simply don't know about. Developers use whatever means they can to try and visualize certain scenes, mostly through the use of storyboarding via rough sketches and concept art. Usually, it doesn't quite matter what this art looks like as the overwhelming majority of it will never be seen by the public. At least, that's probably what Resident Evil 2 director Hideki Kamiya was hoping when he was drawing up the storyboard for one of the game's more emotional moments.

First shared by Resident Evil fan account Project Umbrella RE: Digest on Twitter, a series of sketches depicting Ada Wong's kiss with Leon Kennedy in the original Resident Evil 2 has fans in stiches. One picture in particular stands out from the rest, with Leon looking like he's puckering up to play the trumpet rather than leaning in for a tender smooch. Leon's "kissy face" is pretty much the only thing of note in the sketches, but it'd be interesting to see if any more of the game's storyboarding features similarly ridiculous facial expressions.

The sketches themselves are apparently part of a book called "Research On BIOHAZARD 2 -final edition-" which features several behind the scenes looks at the development of Resident Evil 2, including sketches, screenshots, and monster profiles as well as a bunch of interviews with key staff members. The book doesn't seem to publicly available anymore, although you may have better luck trying to track down a second-hand copy if you're desperate for one.

If you're somehow itching for a replay of Resident Evil 2 after seeing these sketches, you may want to wait a little while longer if you have a PS5 or Xbox Series X, as next-gen versions for all the modern Resident Evil titles are currently in the works. These upgrades promise to boost each game's frame rate and visual performance and will be free for existing owners. They'll even support save transferring so you won't have to lose any of your hard-earned progress should you decide to upgrade.