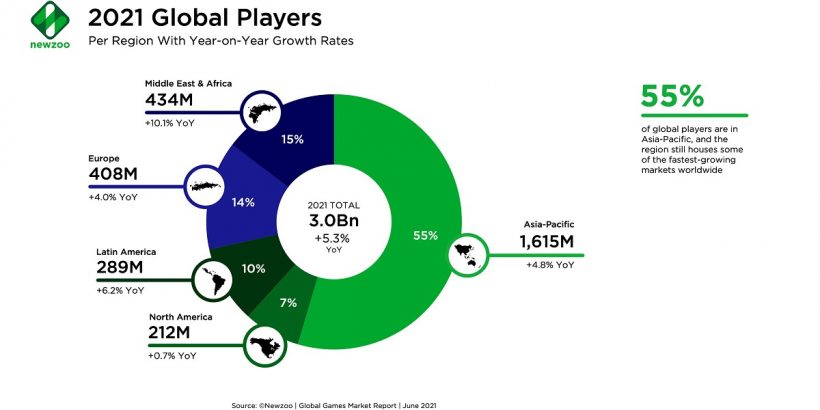 Powered by just under 3 billion gamers, the global games market will generate $175.8 billion in 2021, down 1.1% from a year earlier. The decline will be due to shrinkage of the PC and console market.

The PC market will decrease 2.8% from a year ago to $35.9 billion in 2021, while the console market will dip 8.9% in 2021 to $49.2 billion. That’s because the after-effects of COVID-19 will shape the market this year, resulting in delays of big games and shortages of new consoles.

Newzoo forecasts the mobile gaming market will generate $90.7 billion in consumer spending in 2021, growing 4.4% from a year ago. This is more than half of the global games market, as the segment is less affected by the effects of COVID-19 than PC and console gaming.

The games market’s long-term trajectory remains undeniably positive, but the market simply cannot sustain 2020’s impressive growth for another year. The market’s slight decline this year is temporary, the number of gamers is growing, and how they engage with the pastime is becoming more complex, Newzoo said.

The metaverse trend is also accelerating at an unprecedented rate, and virtual reality is once again blooming after a few quiet years. To that end, this year’s report features a special focus on both topics as well as market estimates, trends, rankings, and data. 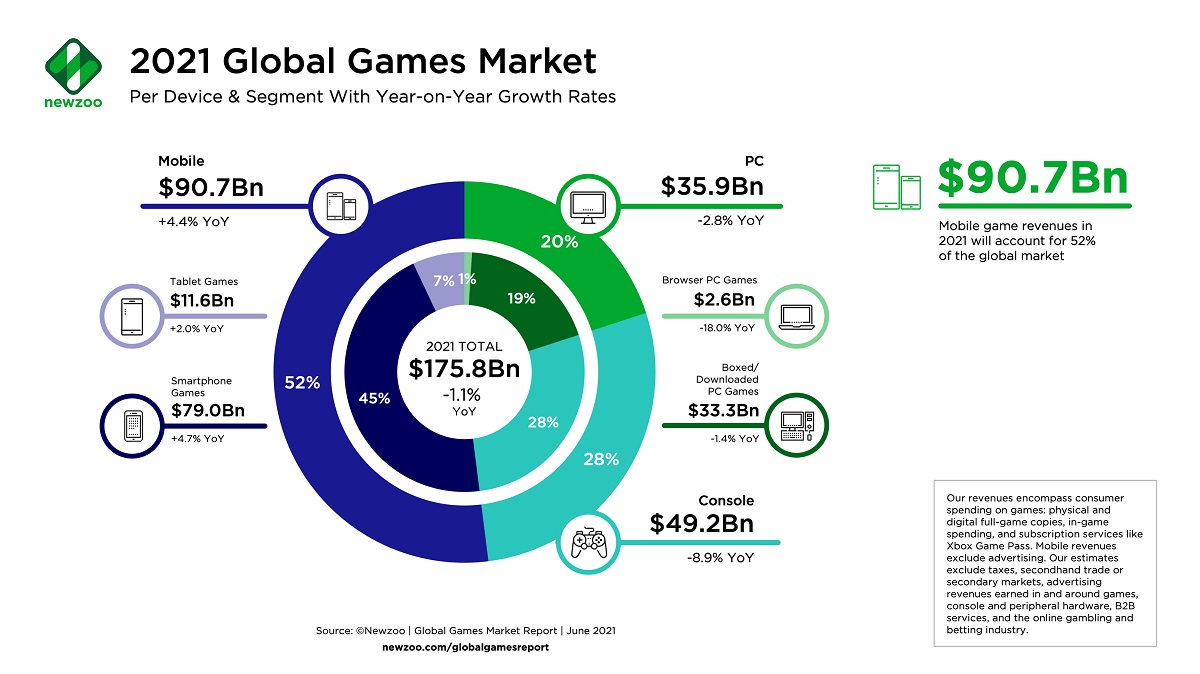 The Asia-Pacific region by far accounts for the most players worldwide (55% of the global number), which makes sense as the region is home to roughly the same share (54%) of the world’s online population.

Asia-Pacific’s high share of players is in no small part due to the massive population numbers in China, but the region also contains growth regions such as India and Southeast Asia.

But when it comes to revenues, Europe and North America heavily overindex for player spending, together accounting for over 40% of games revenues. But remarkably, the two markets house less than a quarter of 2021’s gamers worldwide (14% in Europe and 7% in North America).

Many established game companies in Europe and North America are increasingly paying attention to markets in the Middle East and Africa
and Latin America.

These two regions are the world’s fastest-growing in terms of number of players. As is the case every year, the main drivers for player growth in Latin America and the Middle East and Africa are: growth in their online population; improving internet infrastructure; and smartphone and mobile internet data plans becoming more affordable.

For similar reasons, Western developers are eyeing some of the highest-potential markets in Asia-Pacific too, including China, India, and growth markets in Southeast Asia. 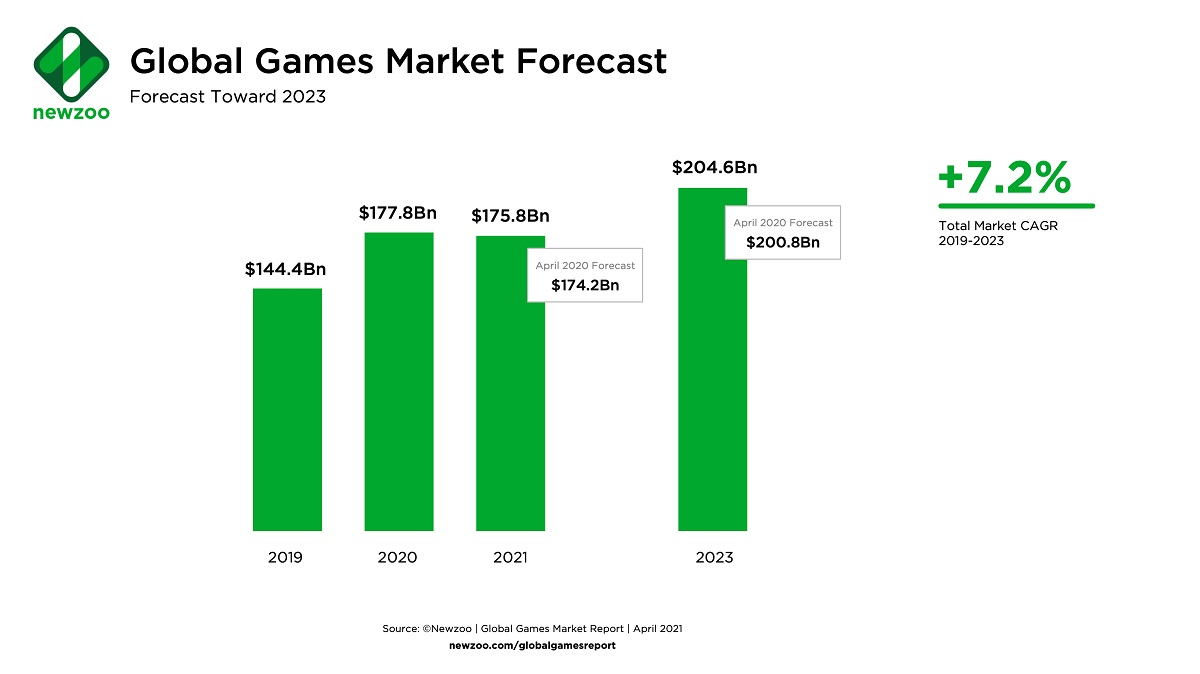 Due to Asia-Pacific’s appetite for mobile games, as well as the segment’s accessibility and ubiquity in all markets, 2.8 billion of the world’s 3.0 billion gamers this year will play on a mobile device. This is compared to 1.4 billion on PC and 900 million on console.

There is understandably plenty of crossover here, as more consumers than ever before play across multiple segments. This is in part driven by the ongoing trend of platform agnosticism (blurring lines between platforms), which is in turn driven by crossplay, Newzoo said.

Player growth rates from 2020 to 2021 are already impressive (+5.4%), and many of the new gamers to enter the market during the pandemic will continue spending and engaging with the pastime. Nevertheless, even more players will enter the market.

In 2015, the player number sat at just over 2.0 billion. By 2024, that will become 3.3 billion. But the ways many players are engaging with games has changed, accelerating one of the most talked-about and potentially disruptive trends in the market. 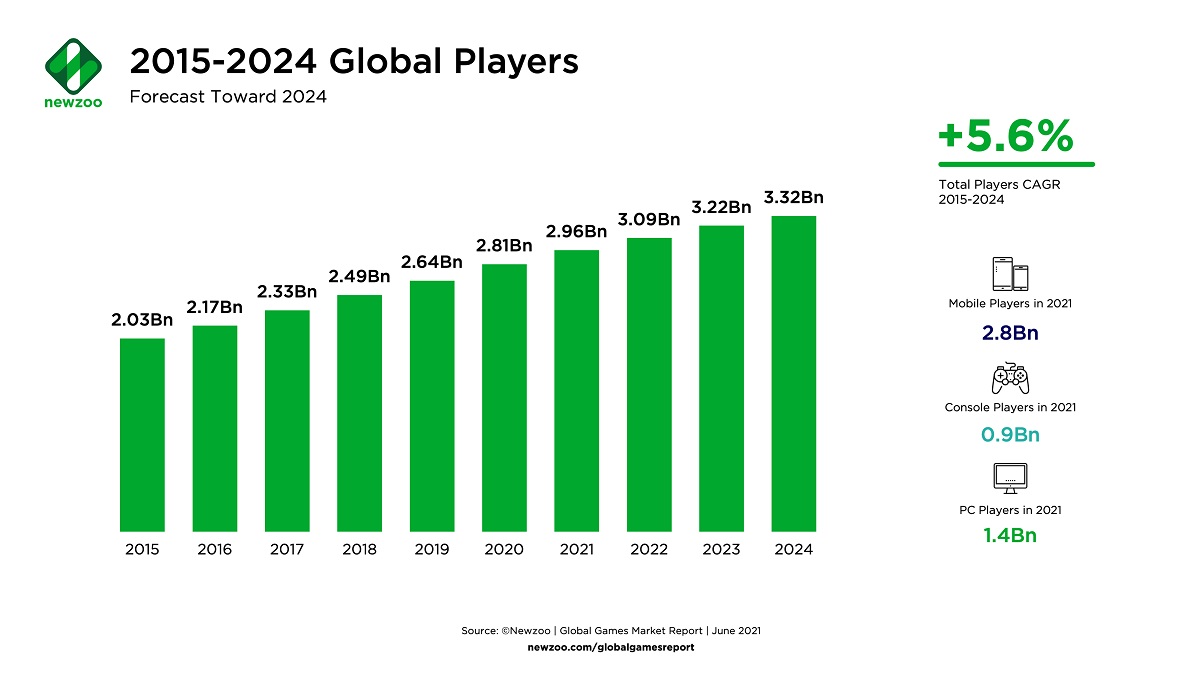 Above: The number of global players is rising steadily.

While everyone was confined indoors, the role of games rapidly evolved into something more significant than an entertainment medium.

Games have become something of an extension of our world: a key destination for social gatherings and a means to celebrate life events. Populated by digital avatars as an expression of the self, game worlds empower communities to host a wealth of social, human experiences that are unattainable via other media, Newzoo said.

This growth of online virtual worlds—and the activities within them—has resulted in waves of attention and investment around what is commonly referred to as the metaverse.

The metaverse trend, rapidly accelerated by COVID-19, is powerful enough to persist beyond COVID-19. Newzoo believes the metaverse has a vital part to play in gaming’s future.