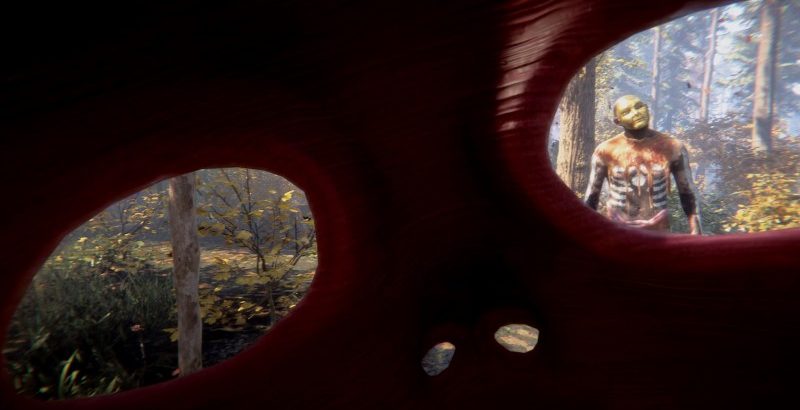 I loved The Forest. My small team of survivors committed a little under forty hours building fortifications around the crash zone, scouring for food and rare weapons in sprawling underground caverns, and keeping cannibals and, later, grotesque mutants at bay. The sequel, Sons of the Forest, got two trailers earlier this year, highlighting a newfound emphasis on storytelling. An unnamed NPC – specifically, a nonvolatile mutant – is slated to be the player’s companion. But beyond montages and short action sequences, previous Sons of the Forest footage inspired more questions than answers.

A new trailer (seen below) continues that exciting, albeit frustrating, tradition of narrative vagueness. However, this time around, we finally got a release date set for Spring 2022.

As you can expect, Sons of the Forests’ mechanics build upon the survival horror systems from the first game. Collecting materials to craft makeshift shelters and hunting equipment has returned. The eating mechanic – most notable when the player character kills a turtle and eats its raw meat (damn!) – is back as well. And, of course, once you venture into dense forests or descend into pitch-black caves, horrifying enemies await. New variants of mutants with fleshy bristles and conjoined torsos will require new weapons to be bested – shotguns, stun batons, and more will aid you in the open world.

Javy Gwaltney also enjoyed The Forest, awarding it a 9 in his Game Informer review and concluding with:

“Perhaps the highest praise I can give The Forest is just how natural the game ties together. A lot of emergent storytelling games often end up having a novelty that overstays its welcome by the end … The Forest is a triumph, both for the survival genre as well as gruesome horror. It gives players just the right amount of freedom to enjoy the challenge of this hellish nightmare.”

Sons of the Forest launches on May 20, 2022, for PC. If you haven’t played the first game yet, I’d highly recommend it, and be sure to read Javy’s 30 Wacky And Gross Things You Can Do In The Forest piece while you’re at it!