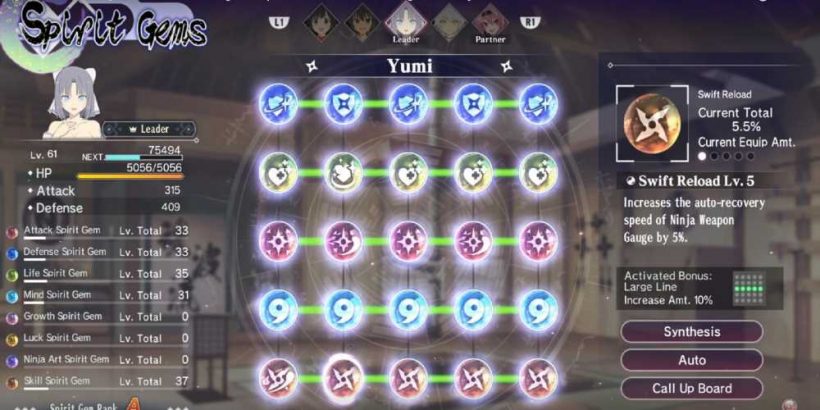 If you've ever played a JRPG, there's a pretty good chance you've encountered something similar to Neptunia x Senran Kagura: Ninja Wars' Spirit Gem system. Even before Final Fantasy 7 stormed onto the scene with its Materia System, there were scattered gameplay concepts native to the genre; today, offshoots range from linking abilities in Kiseki to the intricacies of the Atelier series' Alchemy Grid.

But if any of this is Greek to you – and assuming, of course, that you don't speak Greek – then allow us to prime you on Neptunia x Senran Kagura's own spin on the age-old notion of chaining stat-boosting orbs to enhance your characters to the very zenith of their combat potential.

What Are Spirit Gems? 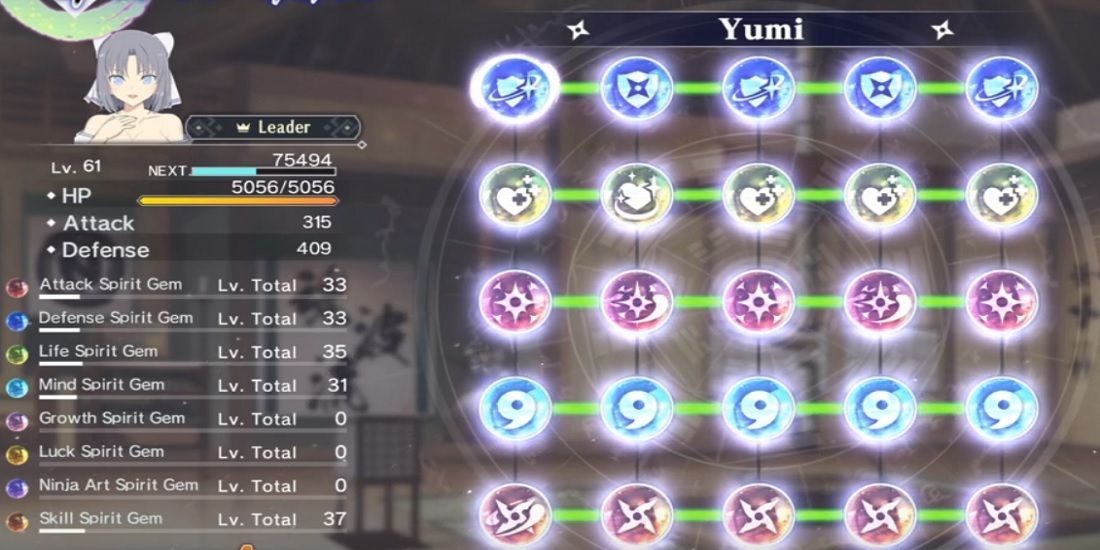 You can think of Spirit Gems as shiny little tools of the trade. They come in several varieties: Attack, Defense, Life, Mind, Growth, Luck, Ninja, and Skill. Broadly speaking, you can get the gist of what each Spirit Gem will do simply by noting its category. An Attack Gem, for example, will focus on upping your characters' offensive capabilities. Pretty basic stuff.

The system's depth begins to emerge once you start accruing Spirit Gems and realize how many varieties exist within each variety. As we illustrate in the following screenshot, Attack Gems include Final Strike, Break Power Up, Yokai Special Attack, and more. Spirit Gems also have levels; the higher the level, the stronger its effect.

Continuing with our Attack Gem showcase, Boss Special Attack increases the amount of damage inflicted upon bosses. This is fantastic for training sessions against tough opponents, but then, a single gem won't make a big difference even if it's highly leveled. This brings us quite tidily into the heart of Spirit Gems in Neptunia x Senran Kagura – synergy.

The Spirit Gem Board 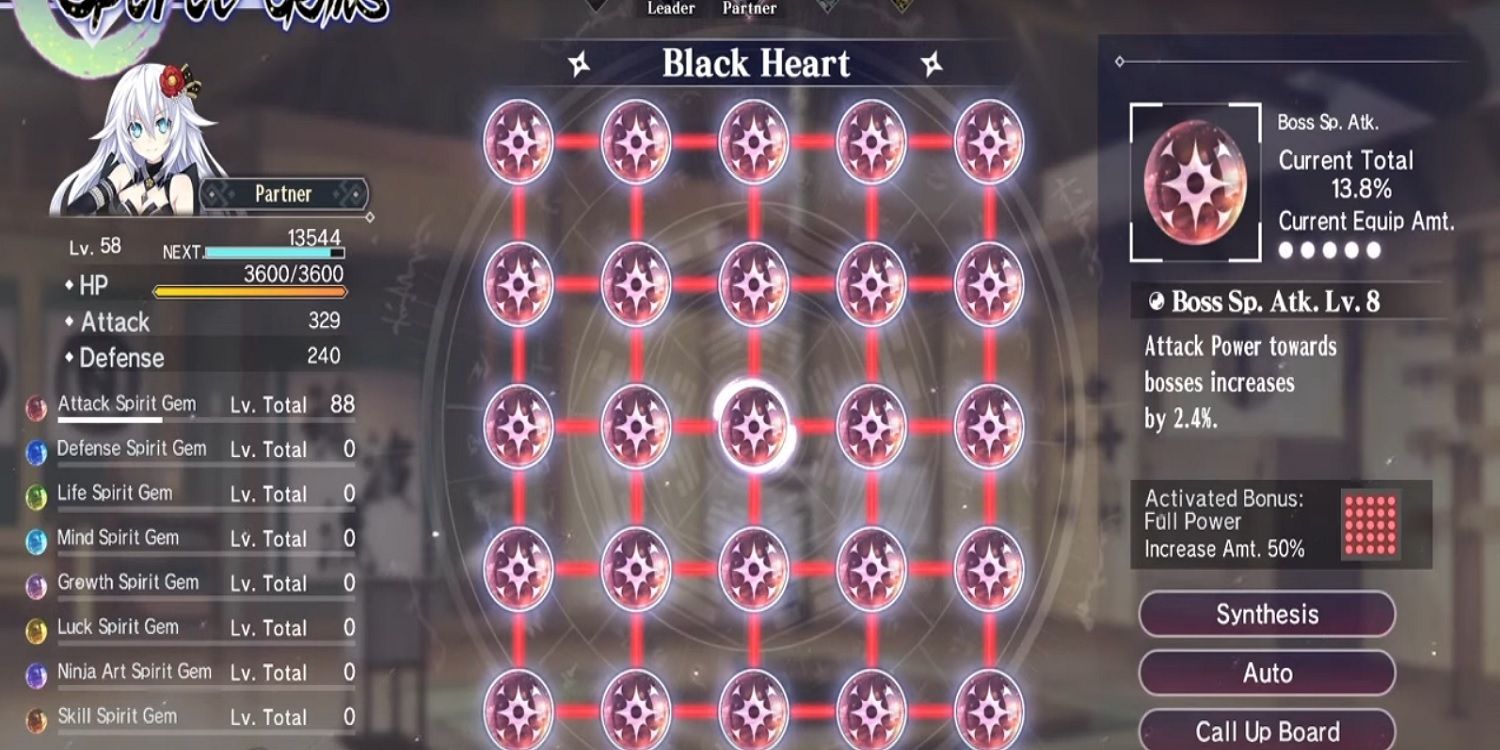 Well, that looks spiffy. See all that red? Every single one of those is an Attack Gem. This is rather overboard in the sense that you'll frequently want to diversify, especially earlier on; lacking in boosts to health, solidarity, and Ninja fare like Shuriken side effects could be a recipe for disaster.

As you move forward with Neptunia x Senran Kagura, however, and you inevitably begin to accrue a frankly borderline-outrageous number of Spirit Gems of every type, you'll want to view your Spirit Board as a swappable commodity, which is to say that it's something you're going to adjust to suit your circumstances rather than slowly build into an all-inclusive permanent build.

RPG players might think of this as a minor version of a "class respec," or to borrow again from a game we cited earlier, changing a character's Materia lineup in Final Fantasy 7. 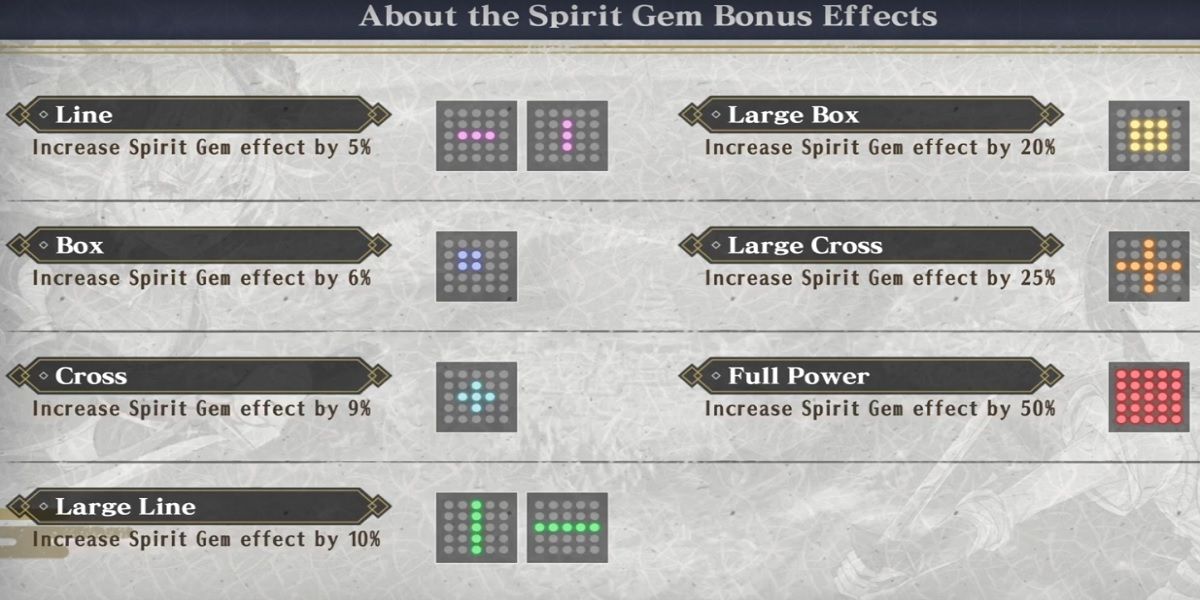 Once you've assembled a lovely suite like the one in the previous section's screenshot, you can really start thinking about synergizing. Note the message toward the bottom-right of the screen. Full Power is one of many synergies. This one derives its name from the fact that you've constructed a board based entirely around one gem category.

The effectiveness of that board rises by 50 percent, which is huge. But as you can see, there are alternative options that still provide ample coverage for Spirit Gems of different varieties. Take Large Cross, for example. 25 percent is still a lot when we're dealing with the Spirit Board, but this allows for 16 more gems outside the type you've chosen for the bonus.

You can even earn boosts within boosts. Look at Large Cross again, and then take a glance at Box. You could fill the remaining "four-packs" of empty spaces on a Large Cross board with multiple Box combos.

Just take care not to get so carried away that you lose sight of what your character will benefit from the most. It can be tempting to create pretty designs with minor boosts to several types, but is an all-rounder actually in your best interests in a difficult mission that seems to beg for a greater focus on defensive measures? By the time those harder fights come around, you should have plenty of Spirit Gems to choose from; swap stuff out and see how you fare.