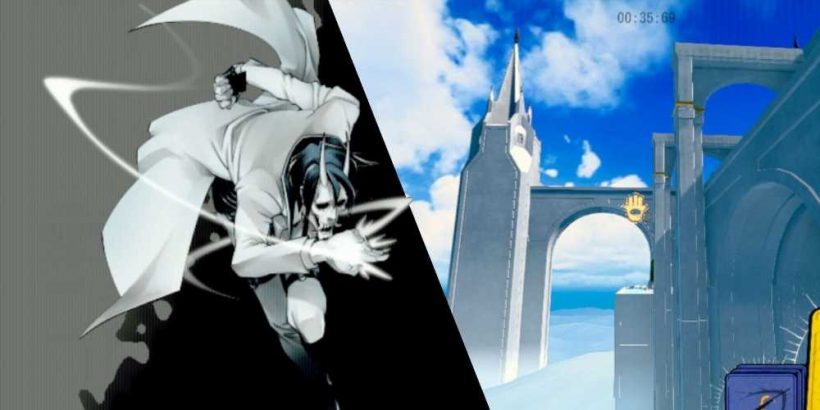 Neon White’s second episode, the Killer Inside, introduces a new weapon into the fold: the sniper rifle. And with it, comes a new discard ability that allows you to perform a long-reaching horizontal dash. Unsurprisingly, this new dash ability is utilized to create a plethora of new and exciting shortcuts.

Whether you are dashing to a far away platform or using your newfound power to skid across the ceiling of a building, it is undeniable that these shortcuts are as fiendish as they are inventive. And don’t worry, your old toolkit will still be in play, so you will be double jumping and bomb jumping in the process. This guide will help point you in the direction of every shortcut in this episode and put you on the path to those sweet, sweet platinum medals. 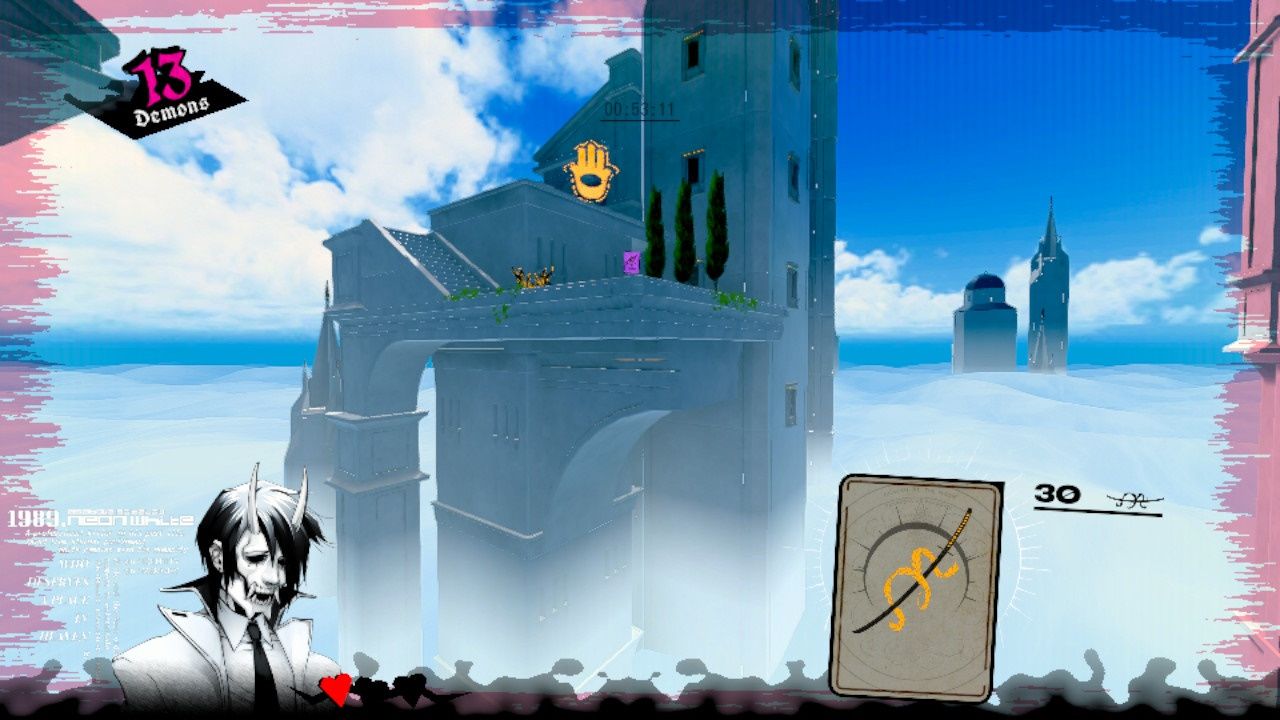 Right at the beginning of the stage, as you are jumping the gap, shoot the balloon demon in the distance with your handgun, then discard it to get the double jump.

Now, grab the assault rifle card. However, instead of using the assault rifle’s discard ability to jump forward, you are going to want to do a bomb jump to your immediate left, skipping a large section of the stage (just make sure when you plant the bomb it takes out the entire group of demons). From here, you will be able to complete the stage as your normally would and claim your platinum medal. 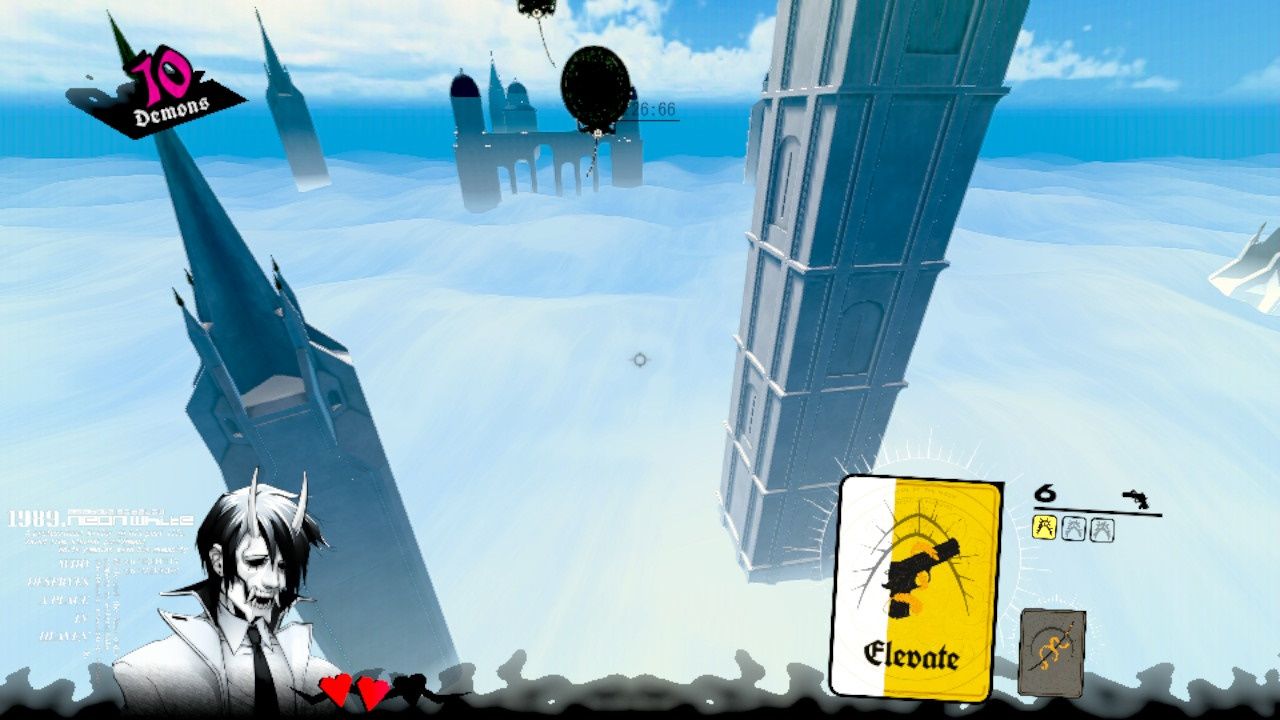 If you want to shave even more time off of your run, after you use this stage’s shortcut, kill the yellow demon, and then use the pistol you get from it to hop over the ledge and skip the stairs. Now, instead of using two double jumps to get to the stretch of balloon demons, you are going to need to use a bomb jump followed by a double jump. This will require you to quickly reshuffle your deck. It is faster, but it is a lot of trouble to go through when the first skip should be more than enough to get you your platinum medal. 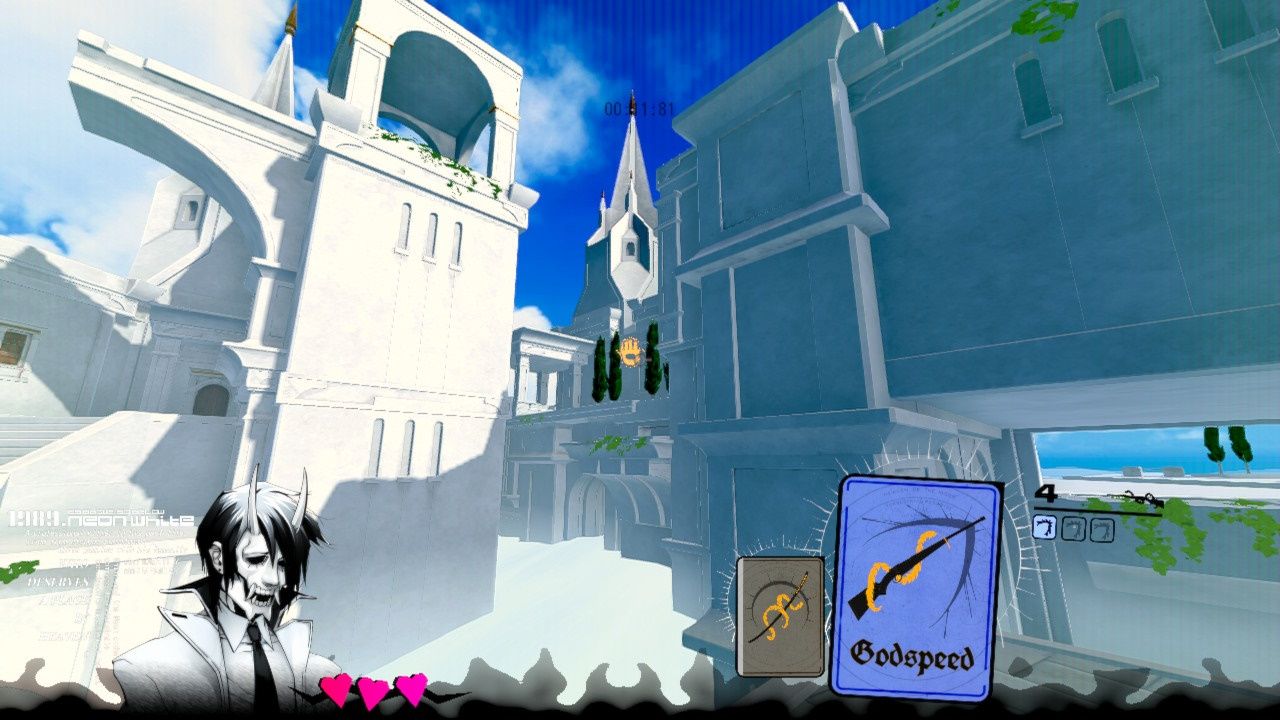 After you claim your second rifle and clear your first gap, you will see another gap you need to use your sniper rifle's discard ability to cross. Don’t do it! Instead, look to your right. You can actually see the level’s exit from here. Use the sniper rifle’s discard ability to hop over that gap and make it to the level's exit. This will easily cut off about a third of your completion time. 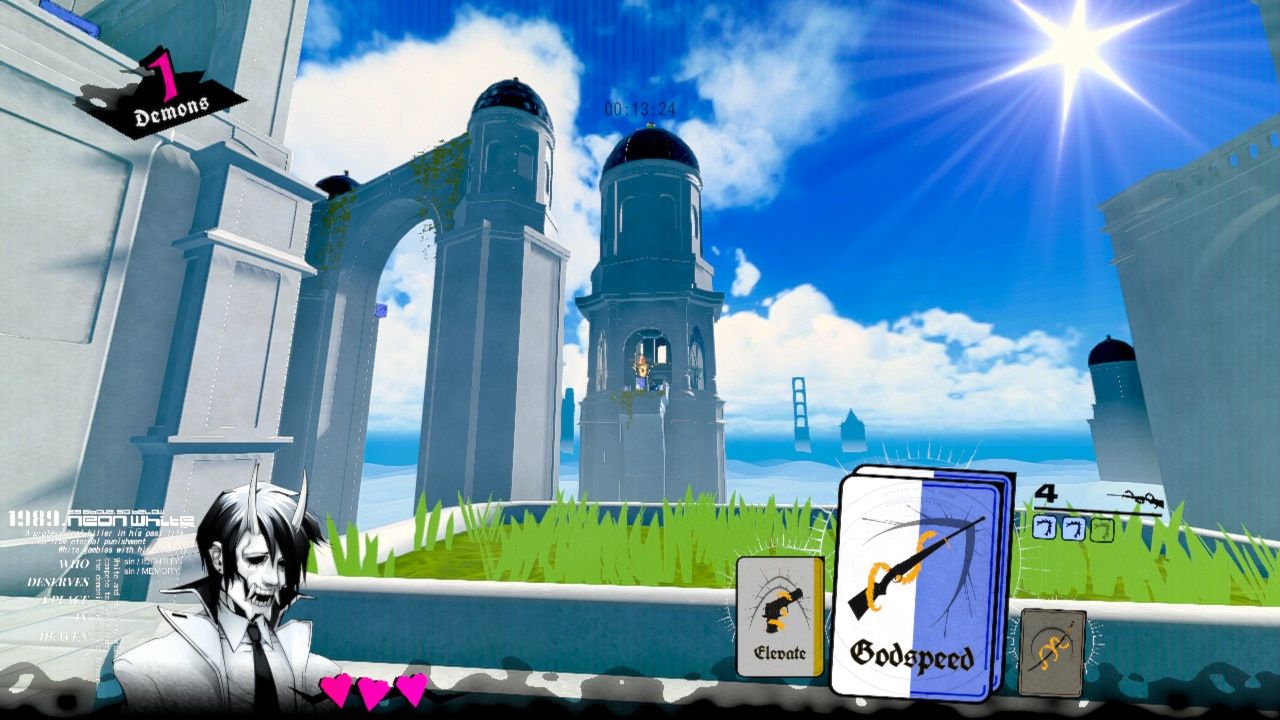 Start the level by taking out the first blue demon, but make sure you still have at least one bullet left in your handgun. Now, clear the courtyard of the two lesser demons and the one blue demon sitting on their perch. Don’t climb the stairs! Instead, look to your right. You can leap over the gap and make it to the distant tower!

Switch to your handgun, jump toward the tower, and use your handgun’s discard ability to perform a double jump and get more height. After that, discard your sniper rifles to dash to the tower. From here, just smash the discard button, and you will instantly blow through all the enemies and hit the level’s exit. 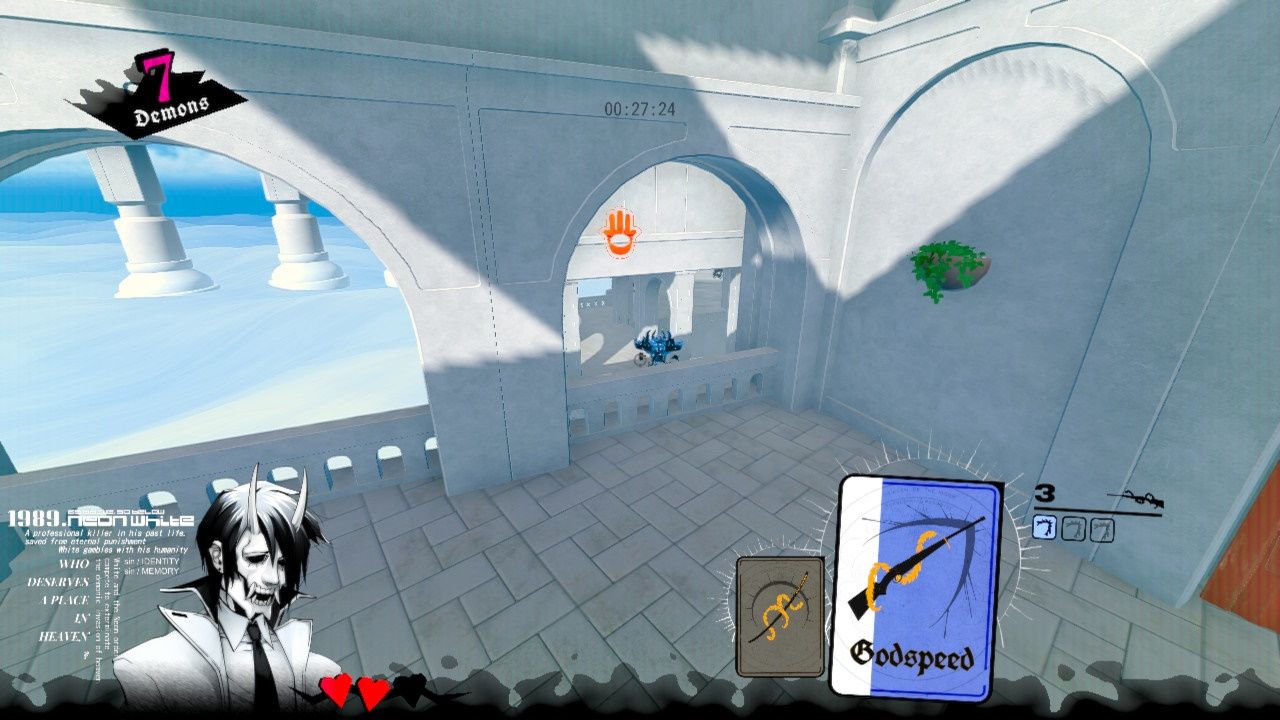 For this shortcut, you simply want to avoid smashing through the boarded-up red door and instead jump out the window to your left. You will need to shoot the lesser demon on your right as you descend, then continue the level as your normally would once you land in front of the blue demon (by dashing through the remaining enemies). This shortcut only saves you a second or so, so you may need to repeat this stage a few times to get that platinum medal. 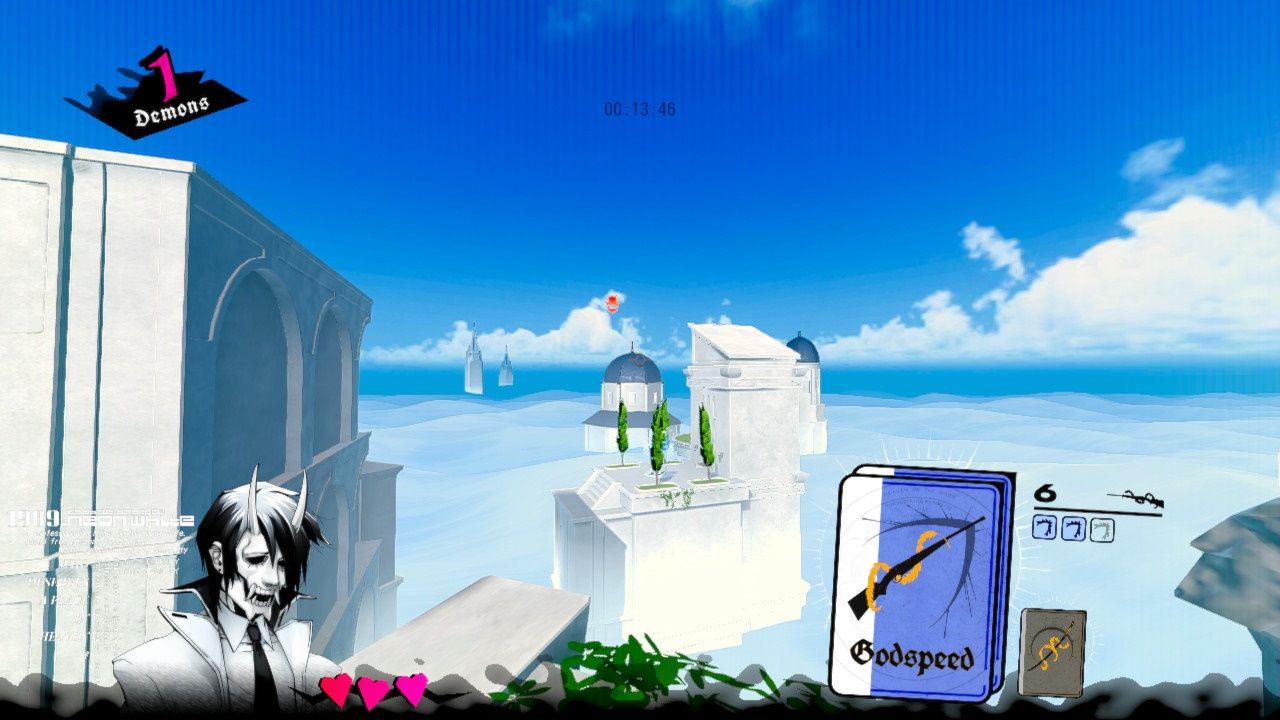 Complete the stage as you normally would. However, once you reach the section with the blue demon on the ledge, don’t dash through it. Instead shoot it, double jump up (by discarding your handgun) and get onto that ledge.

From here, you are going to need to take out the lesser demon by shooting them with your rifle. The shortcut is on your right. Just dash across the gap by discarding your sniper rifle, and you will reach the stage’s exit. Just make sure to take out that lesser demon, or you won’t be able to complete the stage! 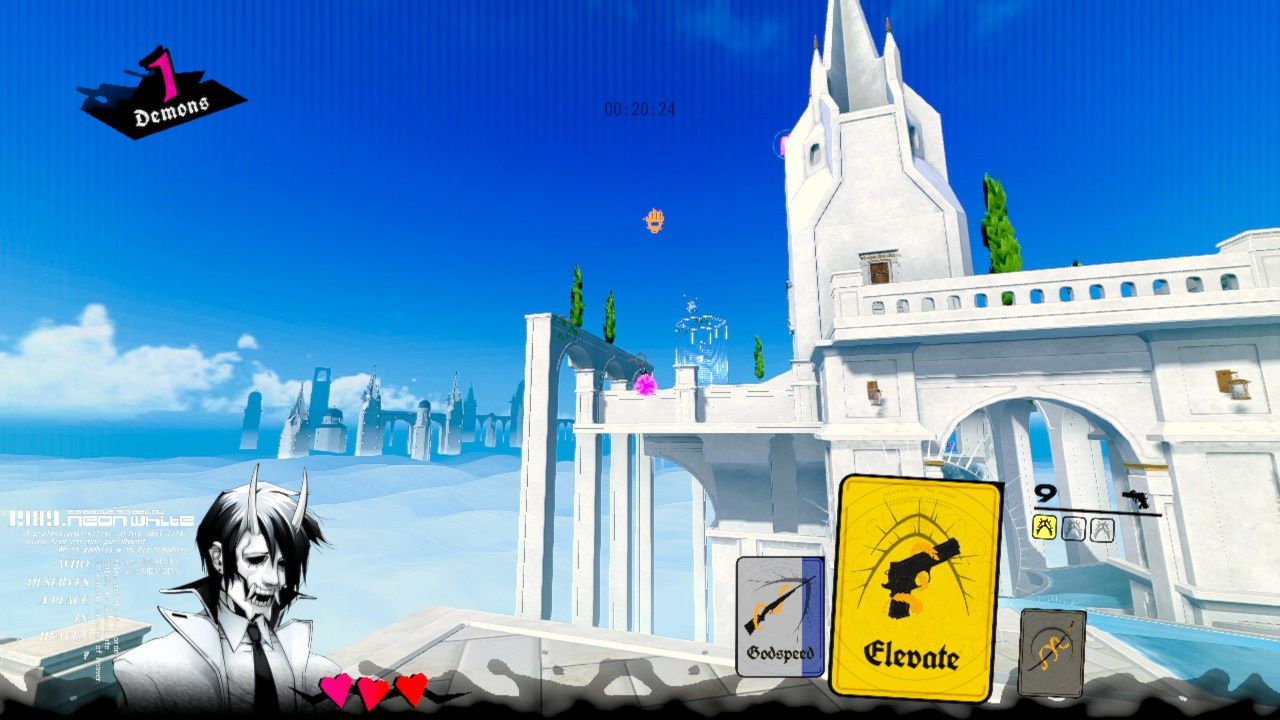 Complete the stage as you normally would. However, once you reach the area with the staircase that leads to the yellow demon, instead of taking a right and traveling along the river-like path, jump across the gap using your sniper rifle's discard ability to dash across.

If possible, try to shoot the lesser demon with the rifle in midair before you discard it, this will give you an even better time. However, this is actually such a potent shortcut that you will have just enough time to finish off the final demon with your sword and still complete the level with a fast enough time to grab that coveted platinum medal. 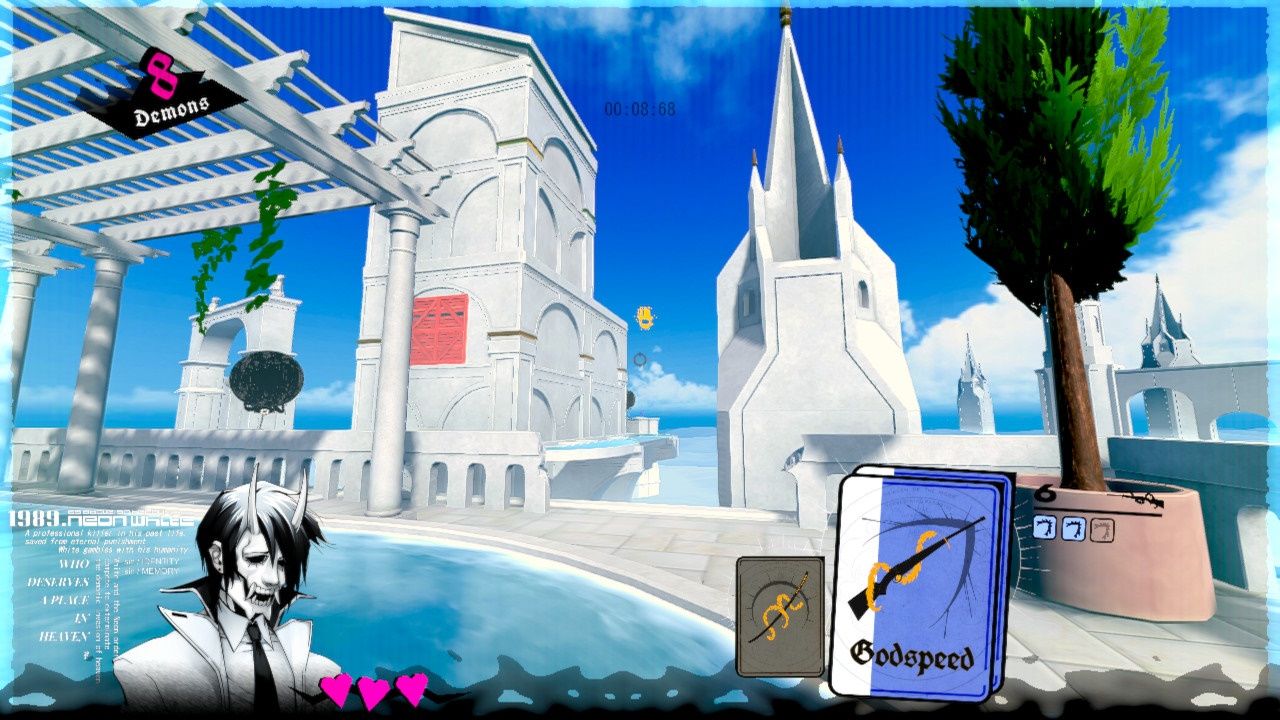 This shortcut is simple enough. Instead of bouncing off of the first balloon demon, and bursting through the red door, you will just dash across the gap and avoid the building altogether. The one thing you are going to have to do, though, is to make sure to shoot the balloon demon in midair. From there, race along the watery path that circles the building and finish the stage the way you typically would. This shortcut will easily lop off a few seconds from your finish time. 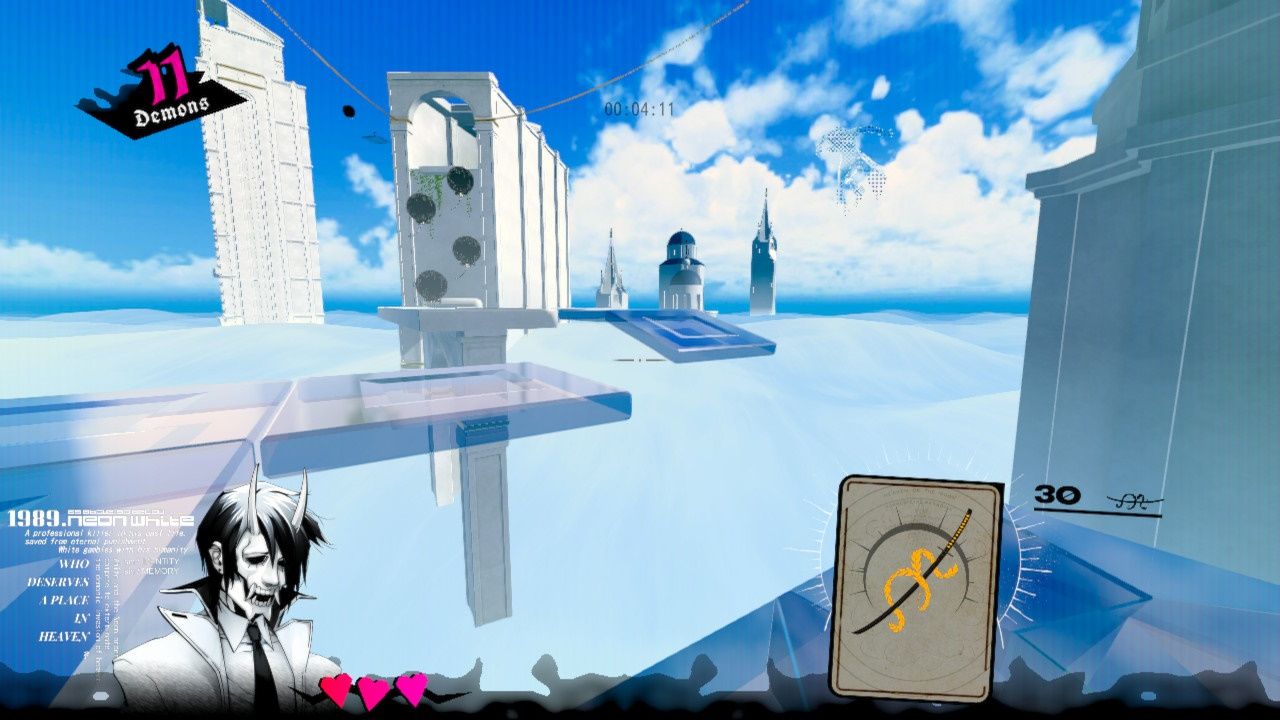 There are two shortcuts in this stage. At the very beginning, don’t run along every pane of glass. Instead, when you get to the third one, jump the gap. This will save you a sneaky second. 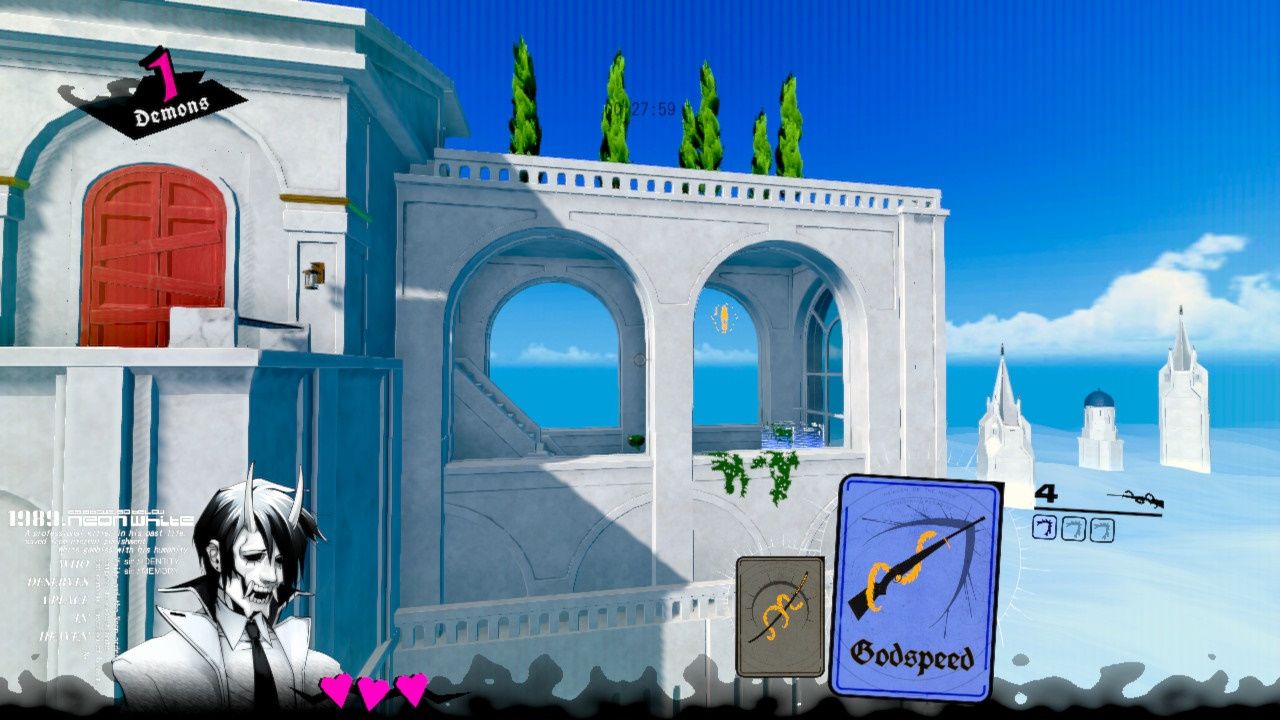 The next shortcut is found in the final section. After bouncing off of the final balloon demon, instead of dashing through the barred door, you should dash through the giant, open windows. This will cut off another second from your time. Utilizing both of these shortcuts should provide you with an excellent finish time. 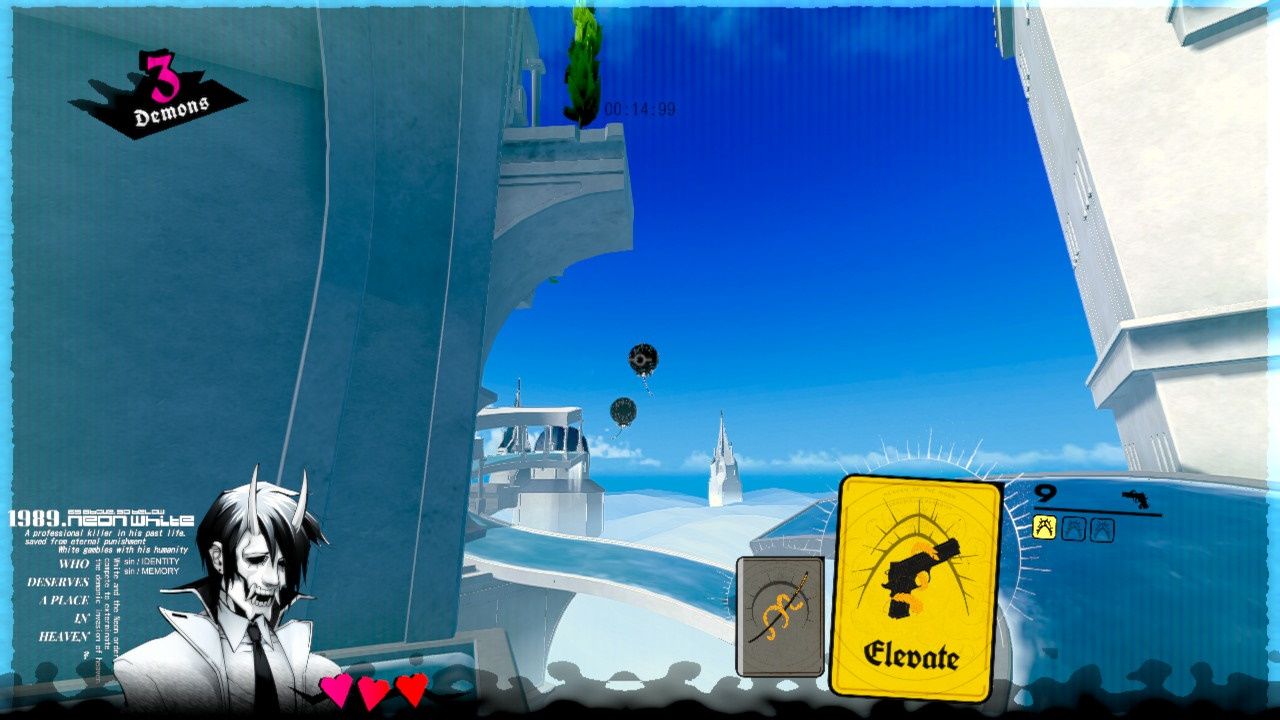 After you slash your way through the glass wall, don’t head down the watery track on your left. Instead, stay on the platform where you found the handgun. Now, shoot the two balloon demons on your left. 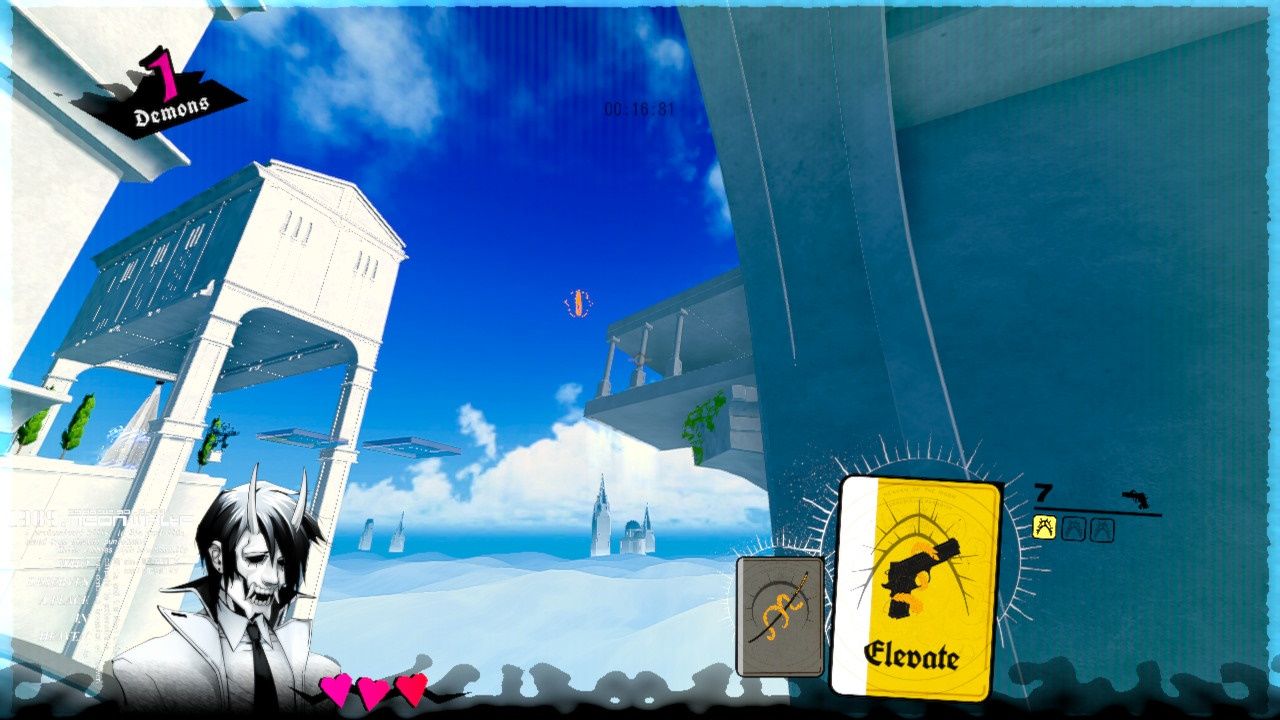 Then, look to your right and discard the handgun to perform a double jump up to the path above. From here, complete the stage as you typically would. This is a major shortcut and will shave multiple seconds off of your time. 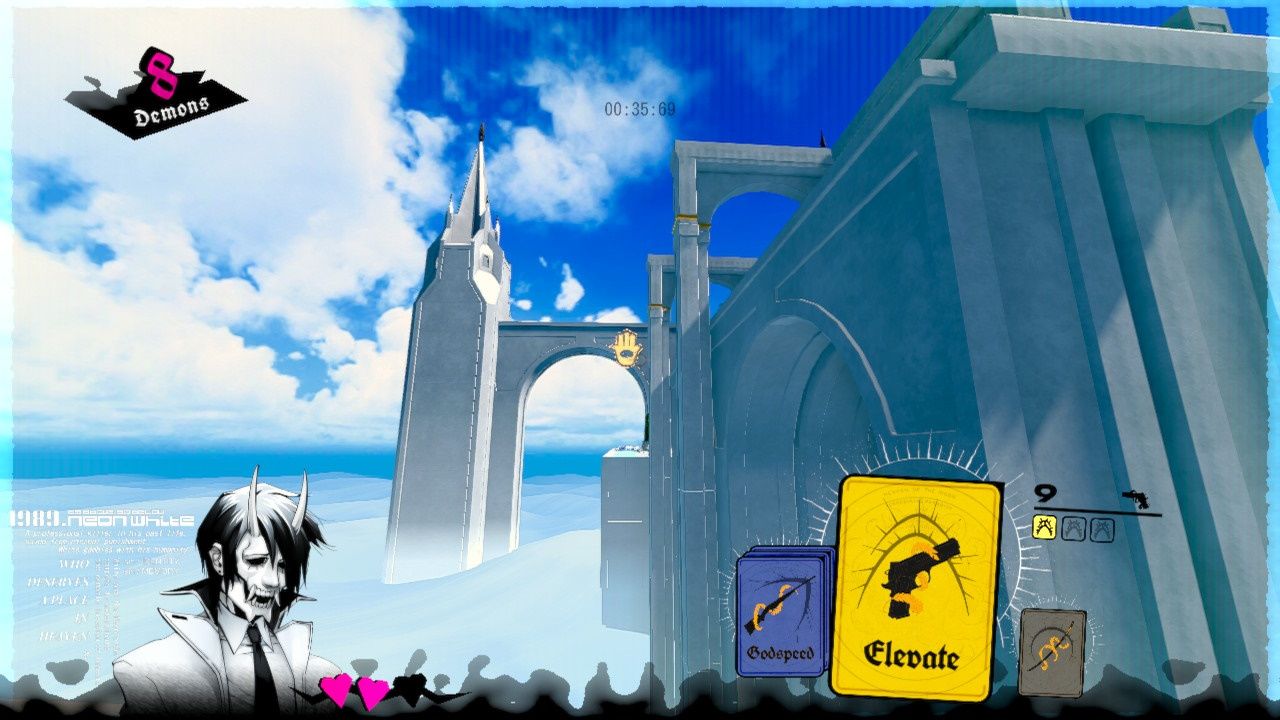 Play the stage as your normally would. You will eventually reach a section where there will be a lone yellow demon on a stretch of water. Don’t dash through them. Shoot them with your rifle instead. There are two blue demons on a glass platform to your left: shoot that glass platform, killing both of them.

Then, discard your pistol and perform a double jump to your right. This will skip a substantial section of the stage. You can finish the rest of the stage as you typically would, and you should easily claim the final platinum medal in this episode.