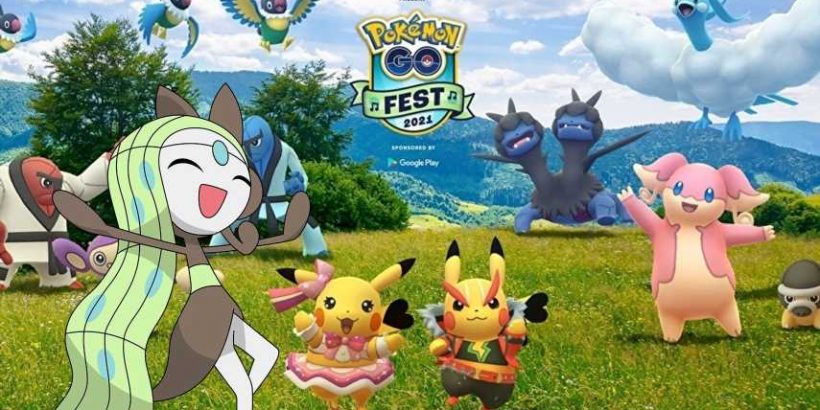 Niantic has confirmed the mythical Pokemon Meloetta will be making its Pokemon Go debut at next month’s Go Fest.

The hype train continues to pick up speed as Pokemon Go heads towards this year’s Go Fest. This Go Fest promises to be bigger than ever for two reasons. It will mark the fifth anniversary of Pokemon Go’s launch, and it is also taking place during Pokemon’s 25th year. Niantic has already revealed what the theme for this year’s Go Fest is going to be.

The theme is music, which is why the reveal of a mythical Pokemon making its in-game debut is rather fitting. After some strong speculation from trainers, Niantic has finally confirmed Meloetta will be added to Pokemon Go’s ever-increasing Pokedex during Go Fest 2021. Meloetta is described by Pokemon’s creators as The Melody Pokemon, hence its addition at this upcoming juncture making sense.

Meloetta can take two forms, Aria and Pirouette. The form showcased in Pokemon Go’s reveal post is the former, and since Niantic has revealed very little about what to expect from Meloetta’s debut, it’s currently unknown whether its Pirouette form will be entering the fray during the same weekend. How exactly Meloetta switches between its two forms poses a problem for Pokemon Go’s creators.

Meloetta uses a move, Relic Song to switch between its forms. That’s obviously not ideal for Pokemon Go. Odds are trainers will get the chance to catch both forms separately and Pirouette form Meloetta will be added to the game at a later date. Pokemon Go’s Pokedex is quickly catching up to the actual one, so any chance to hold onto a new Pokemon for a later release should be taken.

The imminent arrival of Meloetta isn’t the only good news for Pokemon Go trainers this week. Niantic has also revealed Shiny Bidoof will also be making its debut later this month during the Bidoof Breakout event. As for Go Fest, this year’s event will take place during the weekend of July 17 and 18, 2021. Trainers will be tasked with choosing either a pop or rock theme for the weekend which will dictate what music plays in the background throughout.