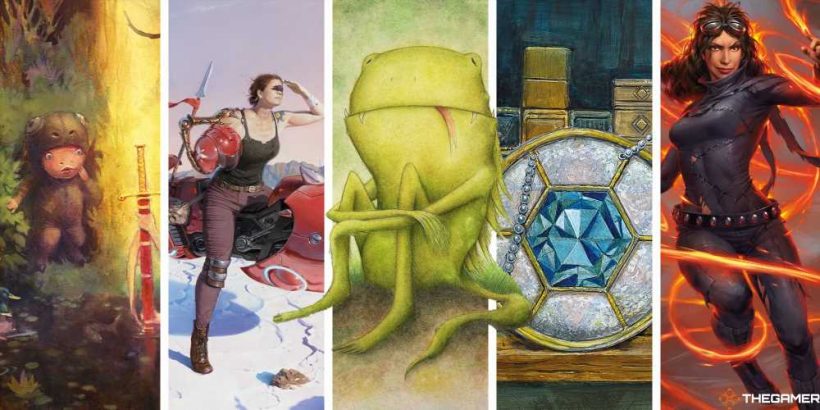 After teasing it at the recent Wizards Presents conference, Wizards of the Coast has unveiled its latest Secret Lair superdrop for Magic: The Gathering.

Like all Secret Lair promotions, this will be available for a limited time and printed to order once the purchase window has closed. Once the Superdrop has ended, it will not be available again. 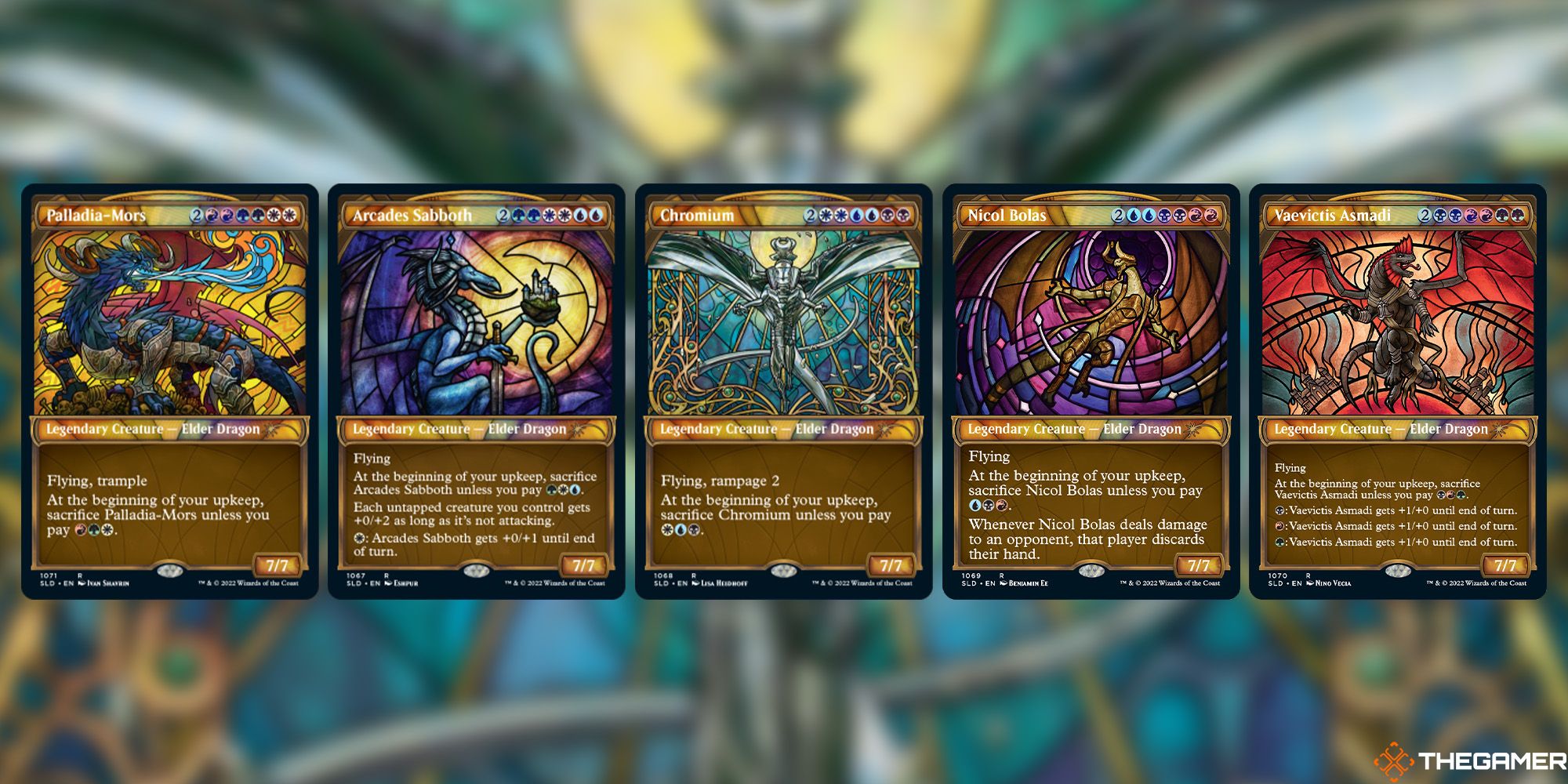 As is usual for Superdrops, we have a tie-in to the latest upcoming Standard-legal set, Dominaria United. Playing off of its stained-glass showcase frames, it features the five Elder Dragons of Dominaria.

Nicol Bolas, Chromium, Arcades Sabboth, Vaevictis Asmadi, and Palladia-Mors are all realised in a gorgeous art style that, ironically, initially debuted with one of the earliest Secret Lair promotions before making its way over to Dominaria United.

It would’ve been nice had these been the more recent versions that are slightly more playable, but it fits nicely into Dominaria United’s theme of legends and history. These Dragons not only spawned one of the multiverse’s most prominent threats in Nicol Bolas, they’re also the Elder Dragons that gave Commander its original name, Elder Dragon Highlander.

This is the only drop of this collection that is only available in one style, with the textured foiling that debuted in Double Masters 2022 back for another showing. The drop will cost £49.99 for five cards. 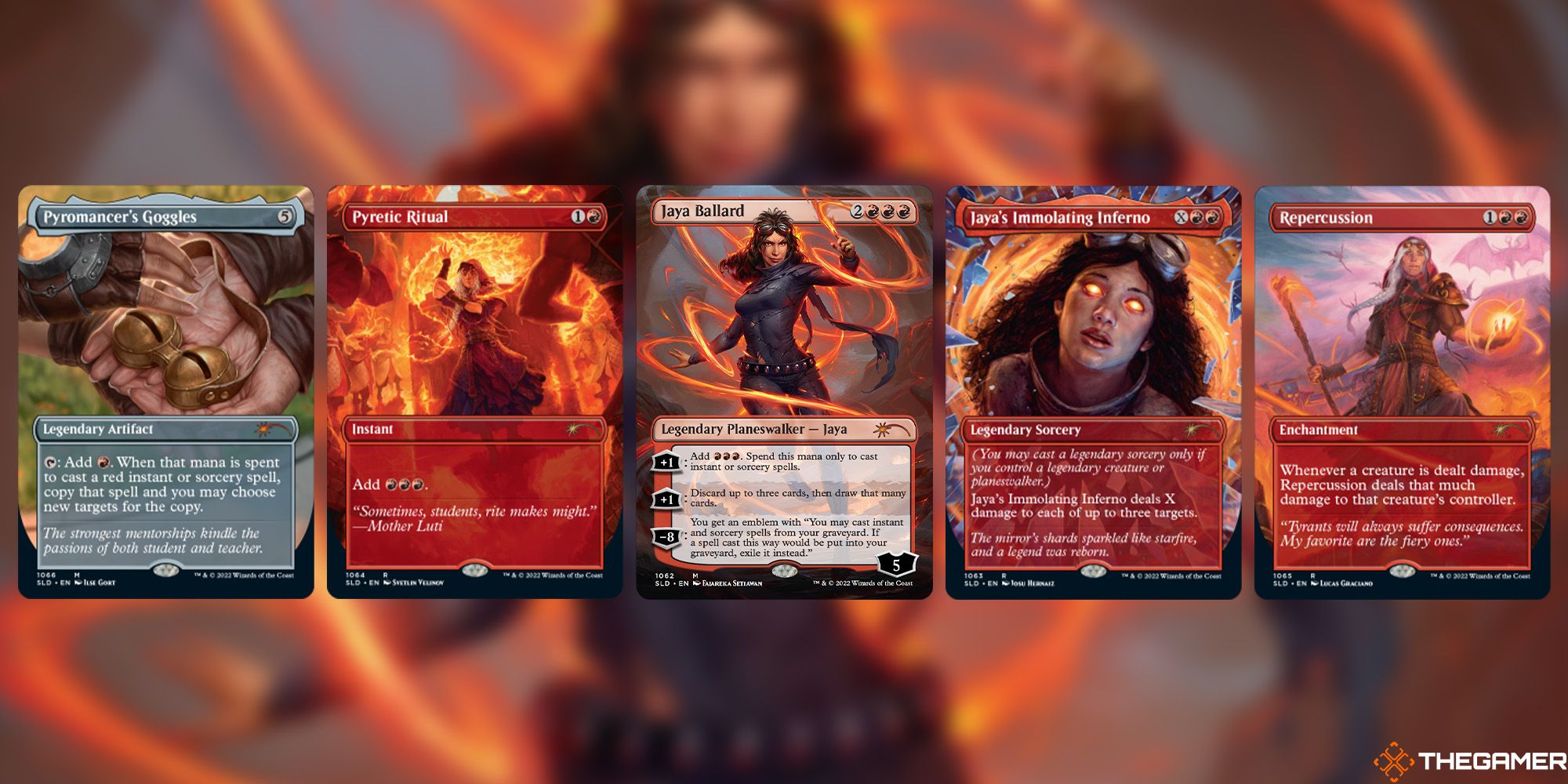 During the Battle of the Mana Rig at the climax of Dominaria United’s incredible story, we said goodbye to not just Ajani Goldmane, who was revealed to be a Phyrexian sleeper agent, but also his first victim: Jaya Ballard.

The powerful task mage and pyromancer from Dominaria, Jaya is one of Magic’s oldest Planeswalkers, having been a prominent part of both pre- and post-Mending storylines. Her death was shocking and tragic, as she was killed by one of her closest allies turned against her.

This drop celebrates Jaya with five of her most famous cards. Pyromancer’s Googles, Jaya’s Immolating Inferno, Pyretic Ritual, Repercussion, and the planeswalker card Jaya Ballard itself have all been given new art based on various points of Jaya’s life. From her time as a Task Mage to even showing the very moment of her spark igniting, It’s a lovely send off.

The cards themselves are great too, with Jaya’s Immolating Inferno a decent win condition in Commander and Pyromancer’s Goggles being perfect for Burn and Spellslinger decks. Her Planeswalker card is very “red doing red things”-y, but that sums up Jaya to a tee. 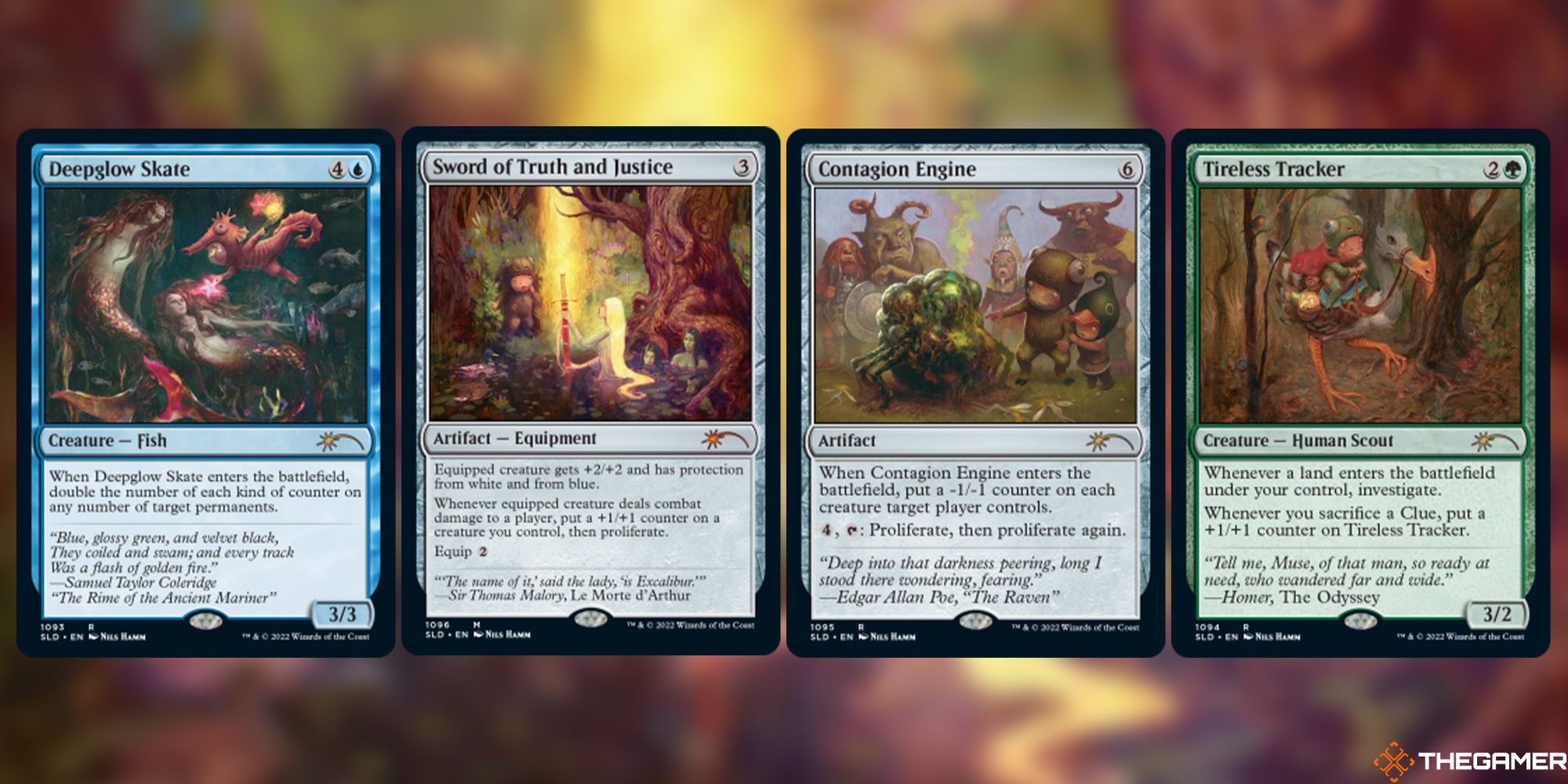 Nils Hamm has one of the most striking art styles in all of Magic, with colourful, dream-like scenes that feel slightly tinged with menace. For the artist series, Hamm focused on cards that’d fit nicely into a counters-focused deck and given them art inspired both by books and also one of his most famous one of his most famous pieces, the ‘Bairn’ Ouphes from Lorwyn-Shadowmoor.

Deepglow Skate, Tireless Tracker, Contagion Engine, and Sword Of Truth And Justice are all given stunning new art featuring the small, frog-like children of Shadowmoor. The feature text is notable too, as it’s one of the first times in many years that real-world literary references have been printed on a card.

This is one of the best value propositions in the August Superdrop. Sword of Truth and Justice alone can cost you approximately £20, and Contagion Engine isn’t too far behind at about £10. They all see regular play too, with proliferate decks being particular popular in formats like Commander. 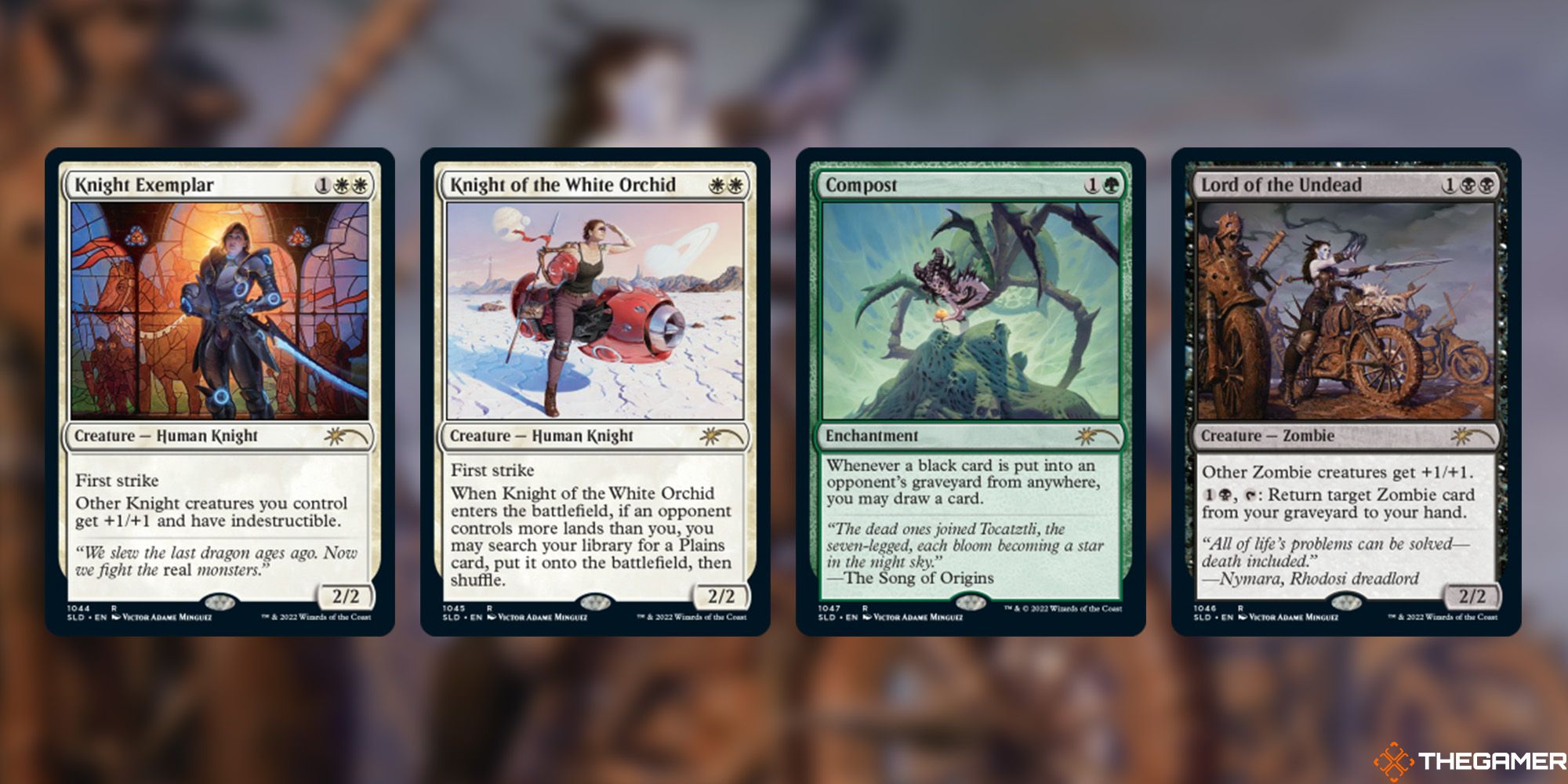 The second artist series of this super drop is for one Magic’s most prolific artists. Victor Adame Minguez. With over 130 cards and tokens to his name, including famous ones like Anointed Procession and Atraxa, Praetor’s Voice, it only makes sense he finally gets to pick his own cards.

For his drop, Minguez has chosen to give Magic a decidedly futuristic look. Across Knight Exemplar, Knight of the White Orchid, Lord of the Undead, and Compost, we’ve got motorbikes, hoverbikes, glowing mech armour and a worryingly cute rendition of Dominaria United’s big baddy, the Phyrexian Praetor Sheoldred.

The cards themselves aren’t incredible, with the highlight probably being Lord of the Undead, a Zombie lord that can fetch them out of your graveyard and to your hand. Knight of the White Orchid is a slightly outdated white ramp tool in a world where we have things like Archaeomancer’s Map, but it does still see play. 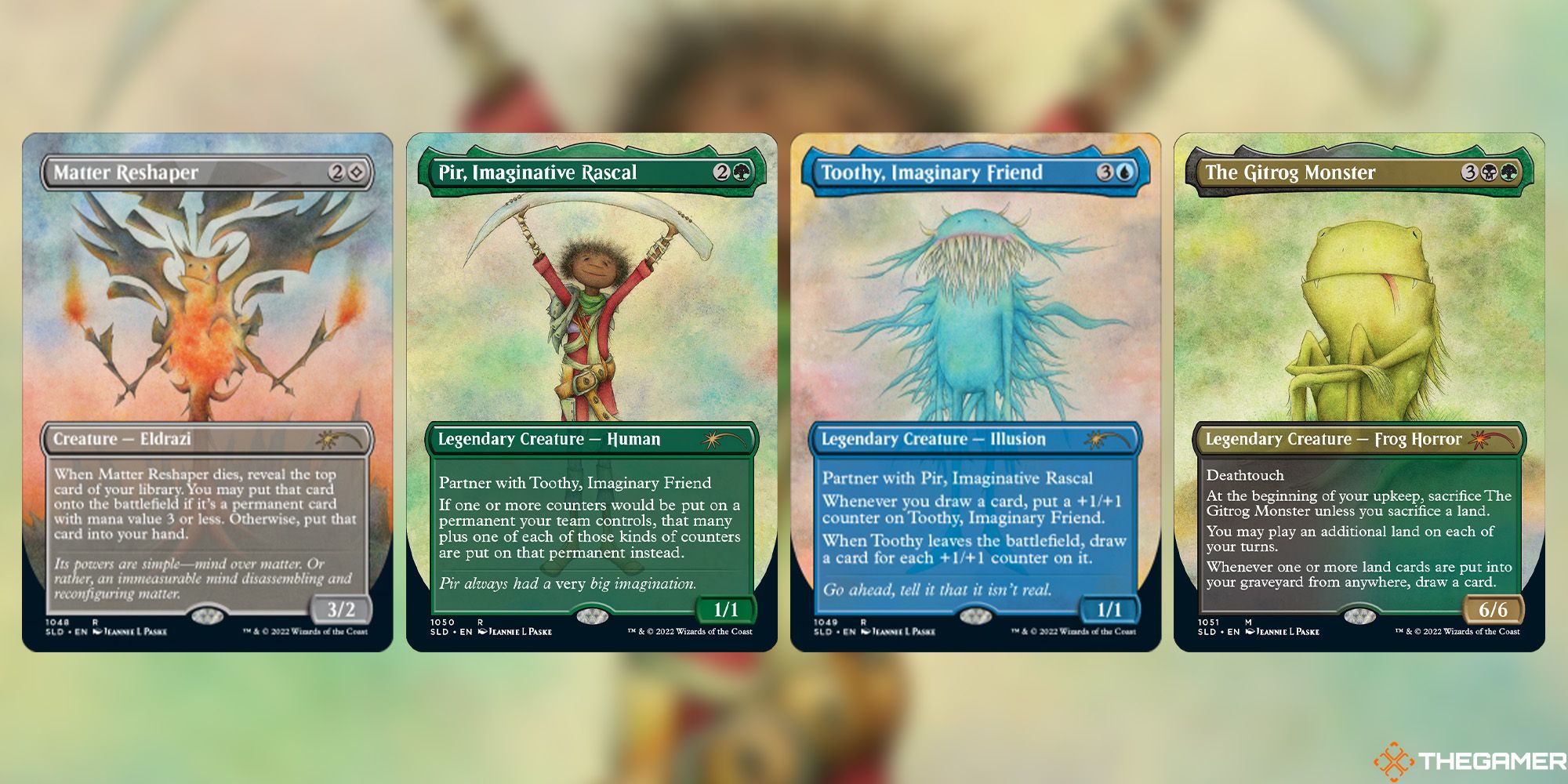 Every Superdrop has to have an adorably out-there drop, and this time it’s Imaginary Friends. Four cards reimagined in a beautiful children’s book illustration style by Jeannie Lynn Paske, these delightful cards reimagine some of Magic’s scariest monsters as the imagine friends of children.

Alongside The Gitrog Monster and Matter Reshaper, we have the partnered legendary creatures Toothy, Imaginary Friend and Pir, Imaginative Rascal.

It’s a slightly odd selection of cards, but it’s fun to see an Eldrazi reimagines as an adorable little gremlin-bat-thing, and Toothy looks adequately freaky with all those teeth. The Gitrog Monster is the clear star of the show, though – not only is it still a top Golgari (black/green) commander, he just looks like such a little guy here that you wouldn’t be angry losing to it.

Dan Frazier Is Back Again: The Talismans 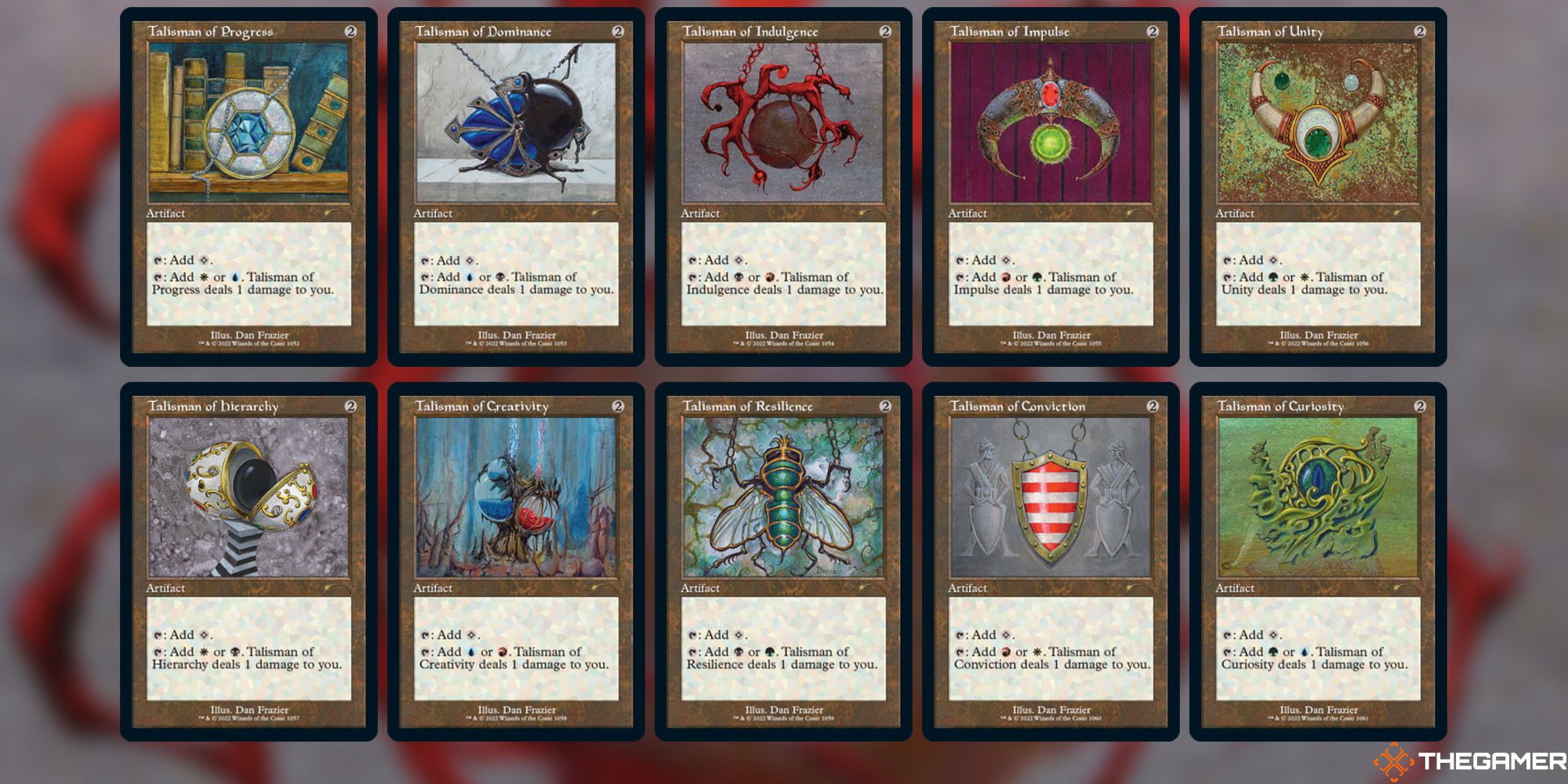 The final two drops of this August Secret Lair feature returning classic Magic artist Dan Frazier for his next set of mana rocks – artifacts that produce mana. Last time it was the ever-popular Signets, and this time he’s giving the ten two-coloured Talismans a retro style.

While they’re not the most-played mana rocks in Magic, they’re still incredibly popular thanks to how easily they give you access to two different colours. It’s also great to see Dan Frazier back, after his Signets proved so ridiculously popular. If you’re wanting to perk up your Commander deck’s mana base, picking up one or both of these would be a good idea. 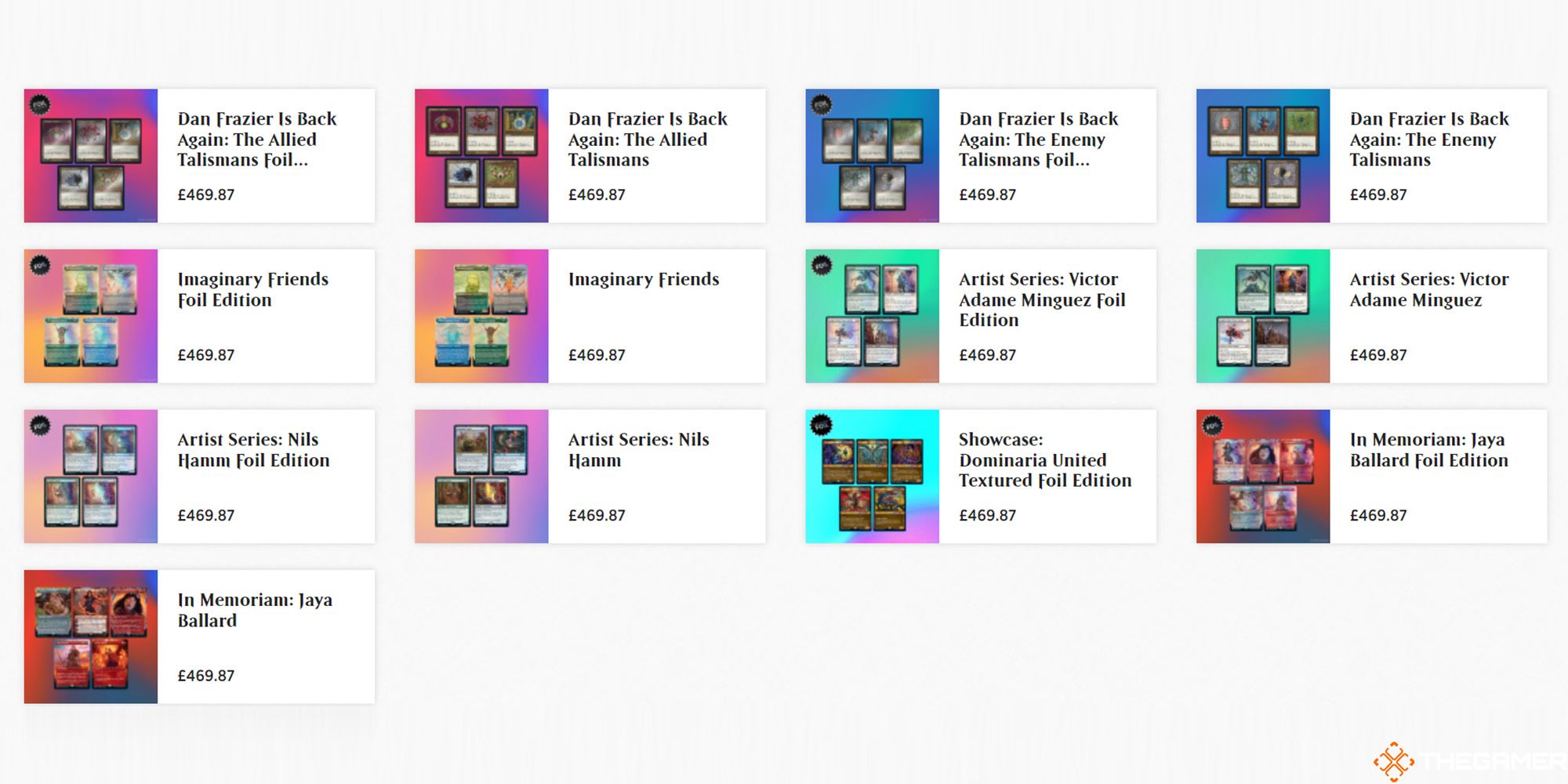 As always, there are three bundles available for those wanting to pick up everything the August Superdrop has to offer.

For £179.94, you can get the Non-Stop, Non-Foil bundle that includes non-foil editions every drop, bar Showcase: Dominaria United which is only available in textured foil.

The Full-of-Foils bundle costs £289.93, and includes every drop’s foiled edition. This includes the textured foil of Showcase: Dominaria United, and the etched foil editions of both Dan Frazier’s Talisman drops.

Finally, at £469.89, the Bundle Bundle includes every single drop available. That means two copies of everything by the Showcase: Dominaria United drop, one in foil and the other in non-foil.