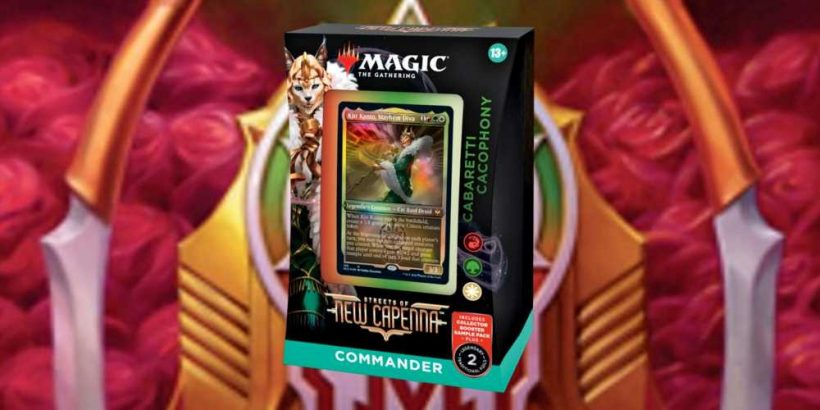 One of the five Commander decks released alongside Streets of New Capenna is the Cabaretti Cacophony deck. This is the deck ruled by red, green, and white mana as part of the Cabaretti crime family. It is intended to be a midrange deck that goes wide with tokens, so its win condition is attacking with its creatures. The upgrades recommended here will continue that theme and it will be assumed that Kitt Kanto remains as the Commander.

Speaking of Kitt Kanto, she has a mana value of four, but in Commander, that means she can be played on turn two. Kitt gives you a 1/1 creature token just by entering the battlefield. She also allows you to tap two of your untapped creatures to pump an opponent's creature and gives them goad. This ability might seem underwhelming, but it will be used to our advantage with a few of the upgrades below. 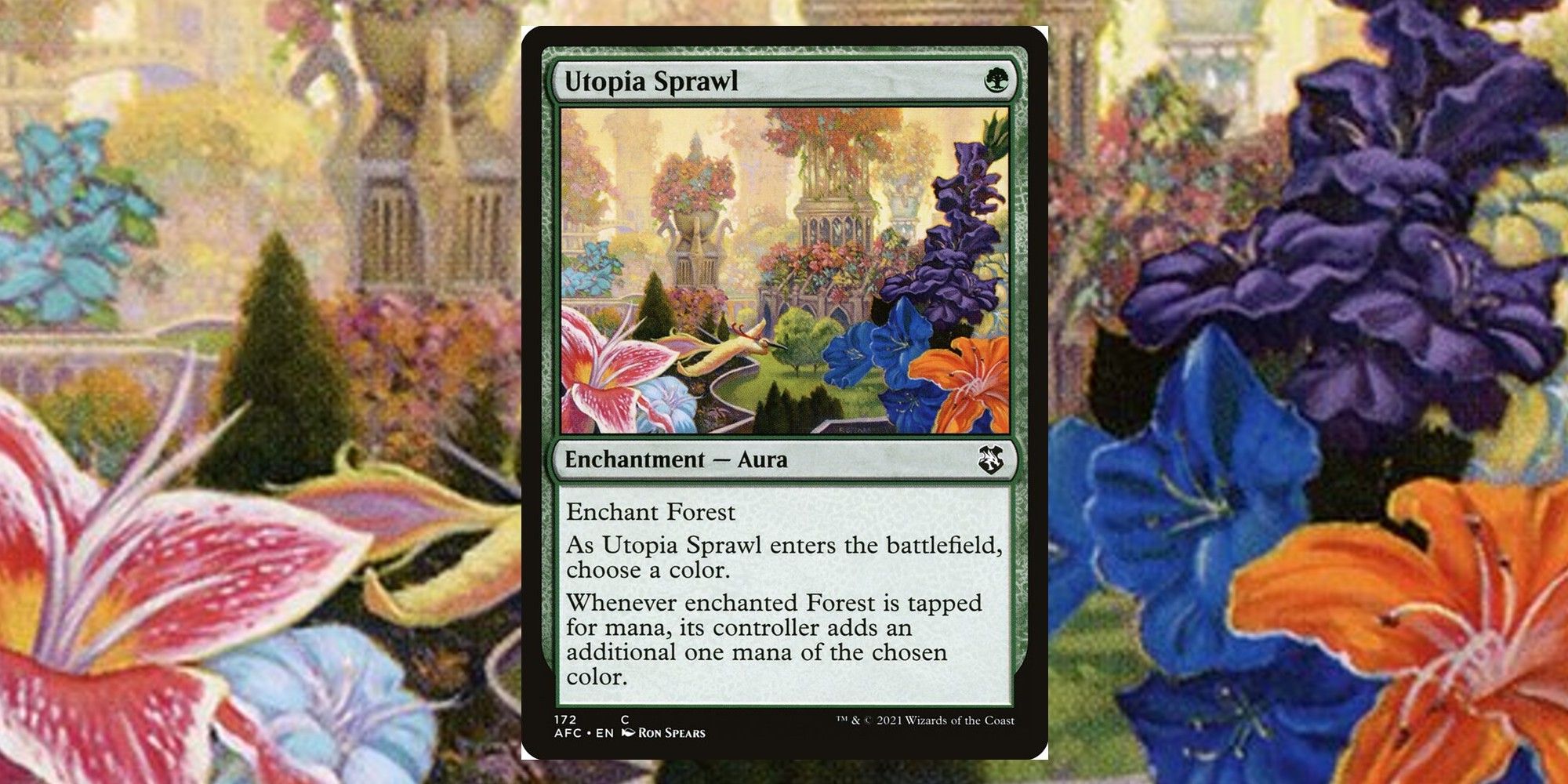 There is nothing more important in Magic: The Gathering than having a stable mana pool. Cabaretti Cacophony comes with a fairly solid mana base originally, but upgrades are always necessary with these preconstructed decks. Utopia Sprawl is an enchantment that gets attached to a forest you control and gives you the fixing you need.

It then allows you to choose a color, so whenever you tap the forest, Utopia Sprawl also generates a mana of the color you chose. In a three color deck, having land that taps for more than one mana and multiple colors is important. 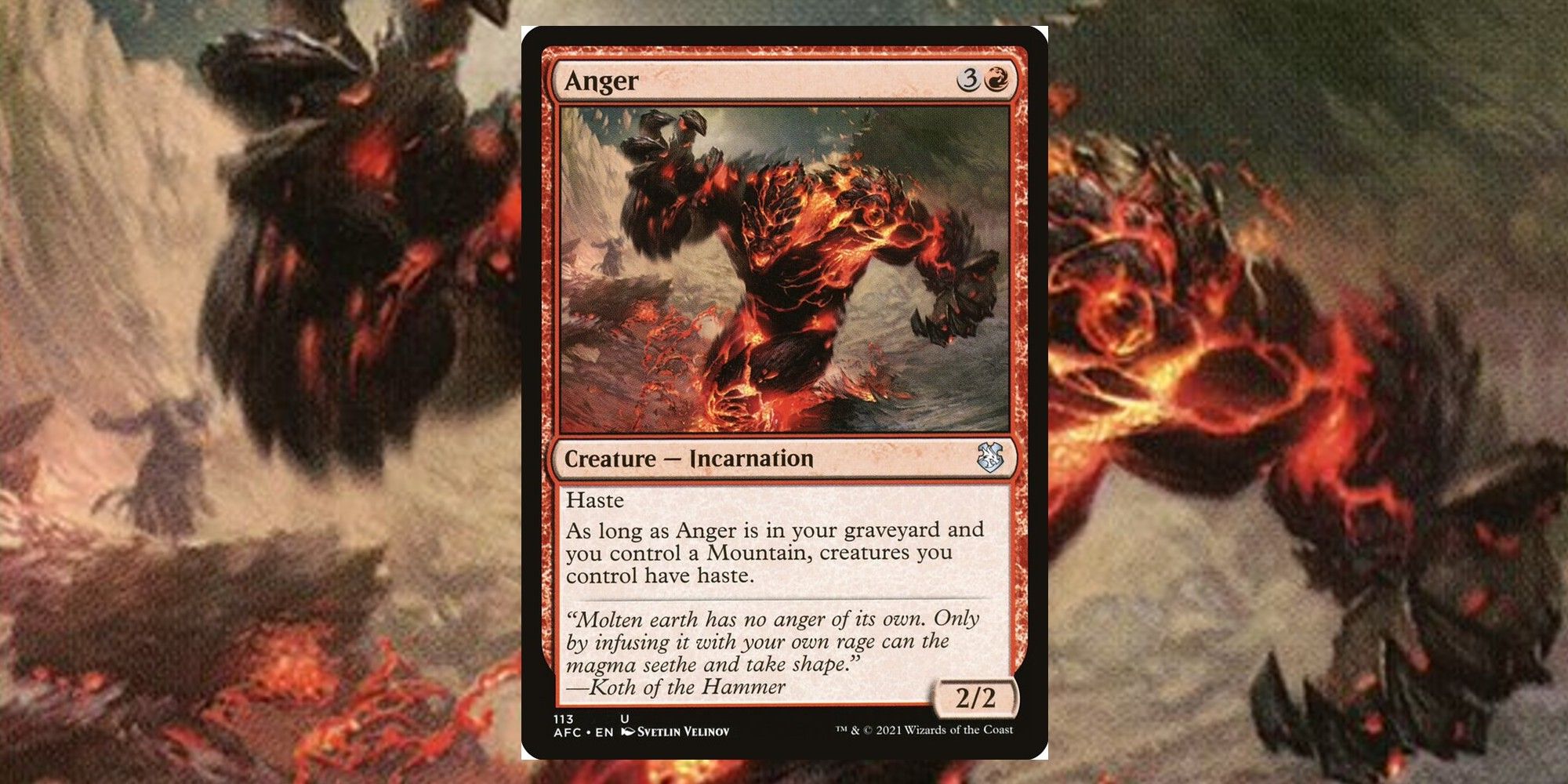 Nothing feels worse than casting a creature and having to wait for your next turn to attack with it. A number of things can happen between your end phase and the next untap step. Especially in a game of Commander. So, having a healthy number of spells that grant your creatures haste is a good idea in a deck reliant on creatures to win the game. Enter Anger.

As long as Anger is in your graveyard, all your creatures have haste. This is beneficial in a couple of ways. Sure, you have to figure out a way to get it into your graveyard, but if your opponent lets it stay on the field, those are free attacks for you and damage that can eventually add up. If you have other spells that grant your creatures haste, there’s nothing wrong with Anger remaining on the battlefield.

8 Emmara, Soul Of The Accord Brings Reinforcements With Her 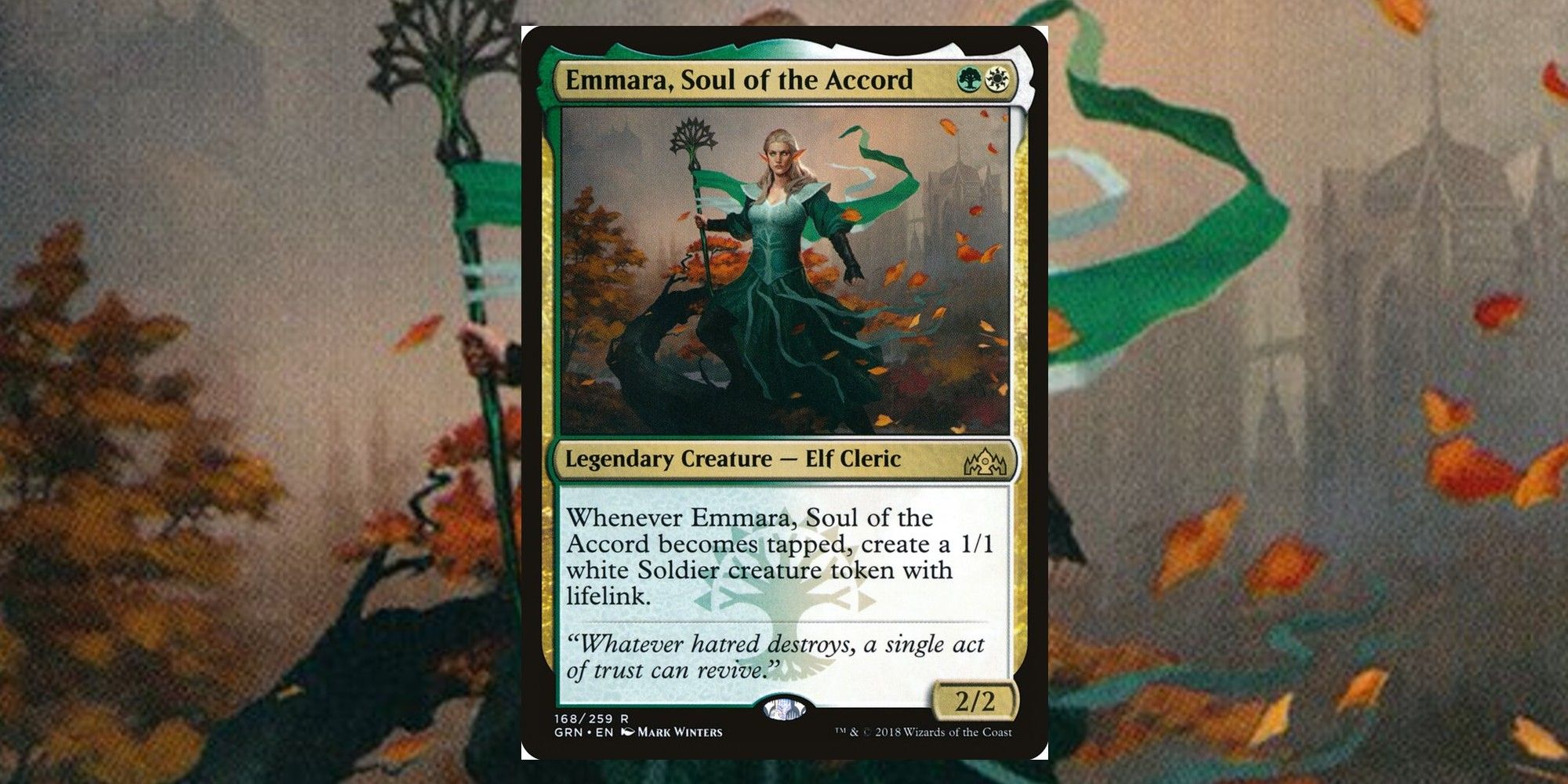 Typically the only way to tap a creature is by attacking or using an activated ability. Thus, Emmara might seem kind of counterproductive since she’s only a 2/2 and can be eaten by almost anything in a Commander game. However, we have a few ways to take advantage of her ability.

For starters, if our Commander is out, then she’s tapping down Emmara with her ability to pump an enemy creature and goad them. If we have a Drumbellower or a similar card that untaps our permanents, then Emmara is being tapped each and every turn. If we have any convoke spells, Emmara is being used to cast that spell. There is no shortage of ways to use Emmara’s ability.

7 Toski With The Card Draw 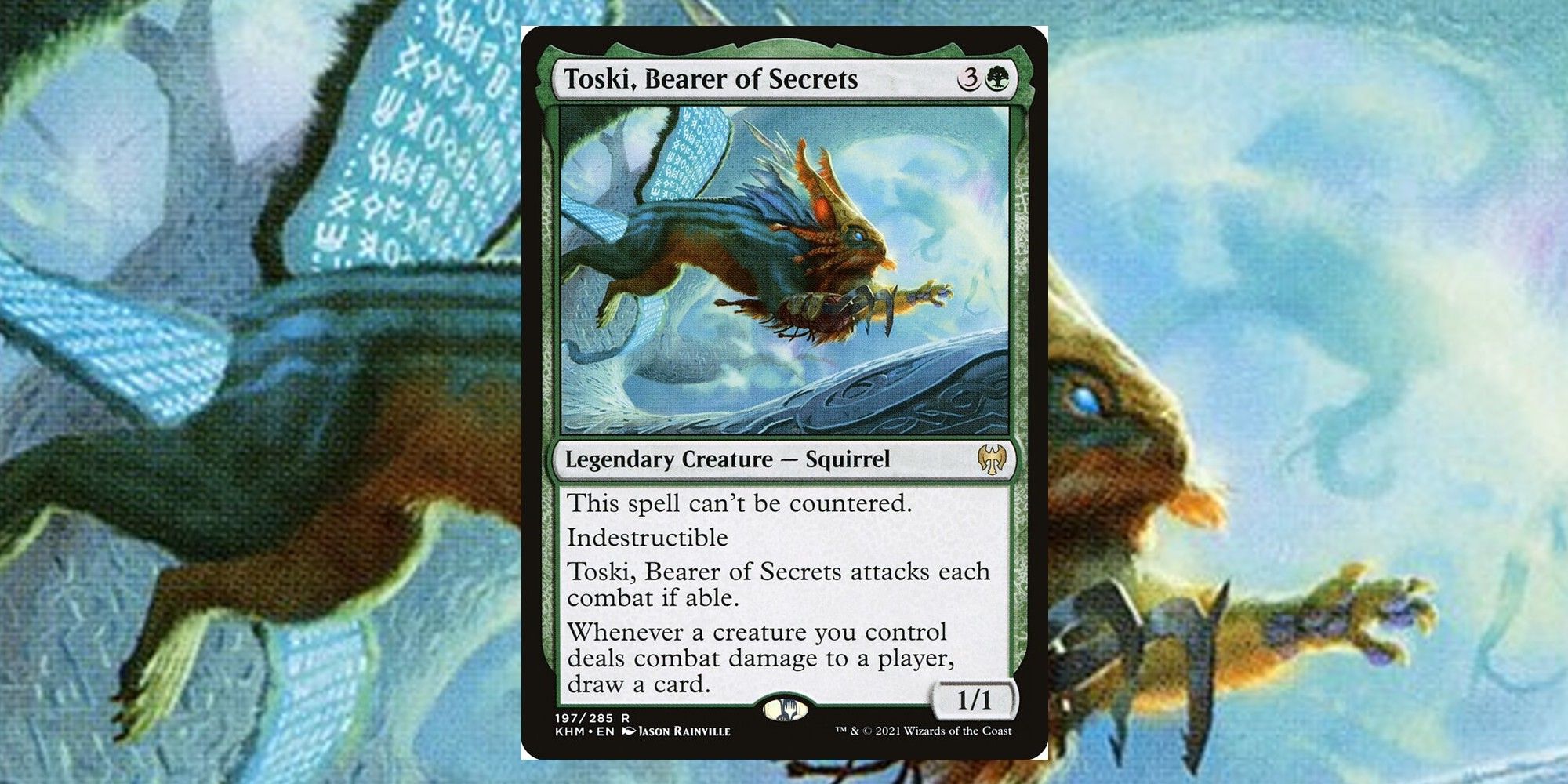 He might be small in power and toughness, but Toski, Bearer of Secrets will still gain you a lot of value. He’s also the most expensive upgrade here and for good reason.

First of all, he can’t be countered, so he’s landing on the field no matter what. Secondly, he’s indestructible. Short of exile or sacrifice abilities, he’s not going anywhere once he lands. Probably the most important advantage he gives you is card advantage because when he’s in play, every creature that deals combat damage draws you a card. Not just him. All of them. You’re welcome.

6 Archon Of Emeria Keeping Everyone At Bay 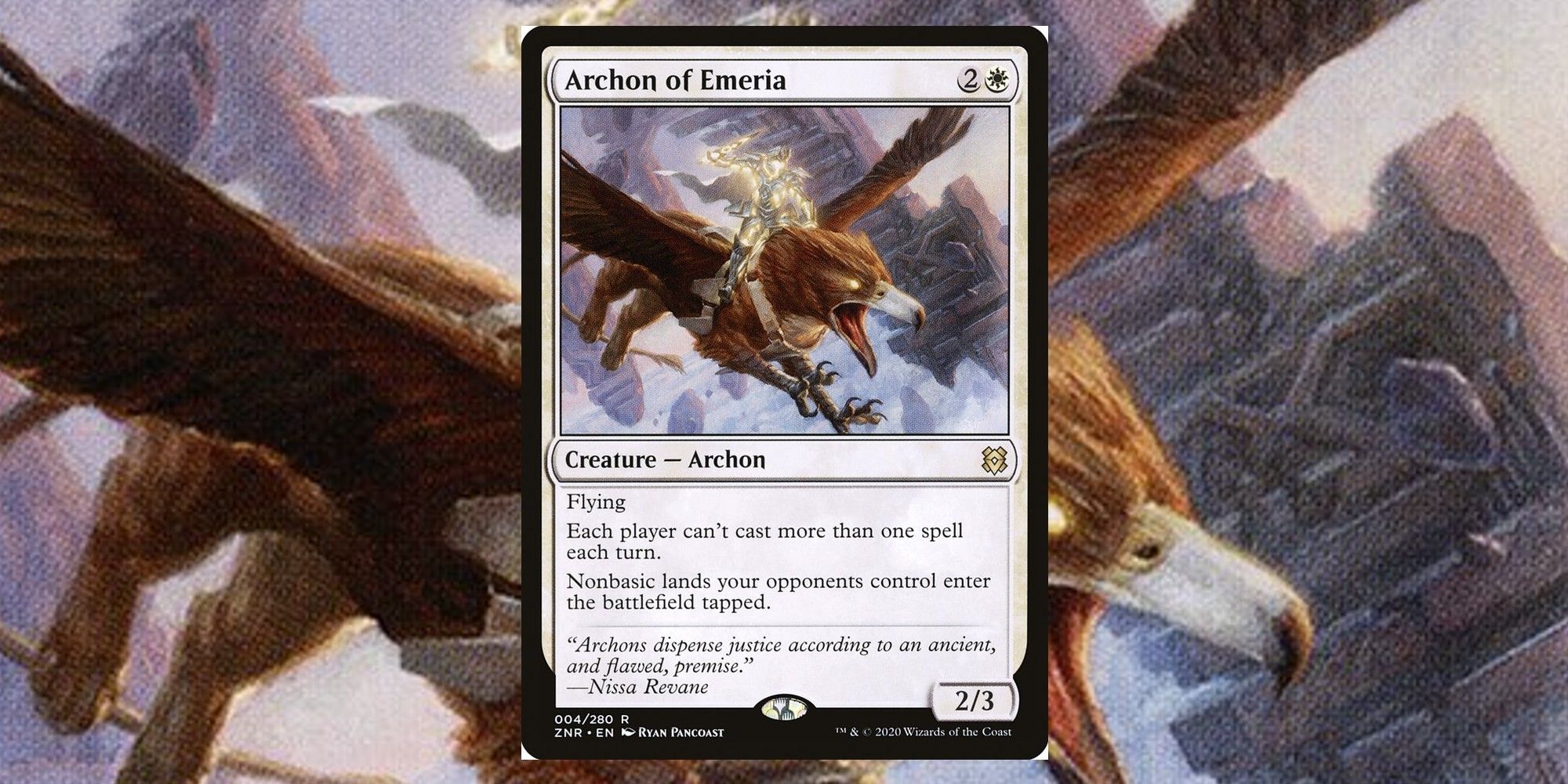 Any nonbasic land they play will come into play tapped, preventing them from using it. This one doesn’t even affect you, so you’re free to play any lands you like. Protect this little guy and you’ll be in a good spot. 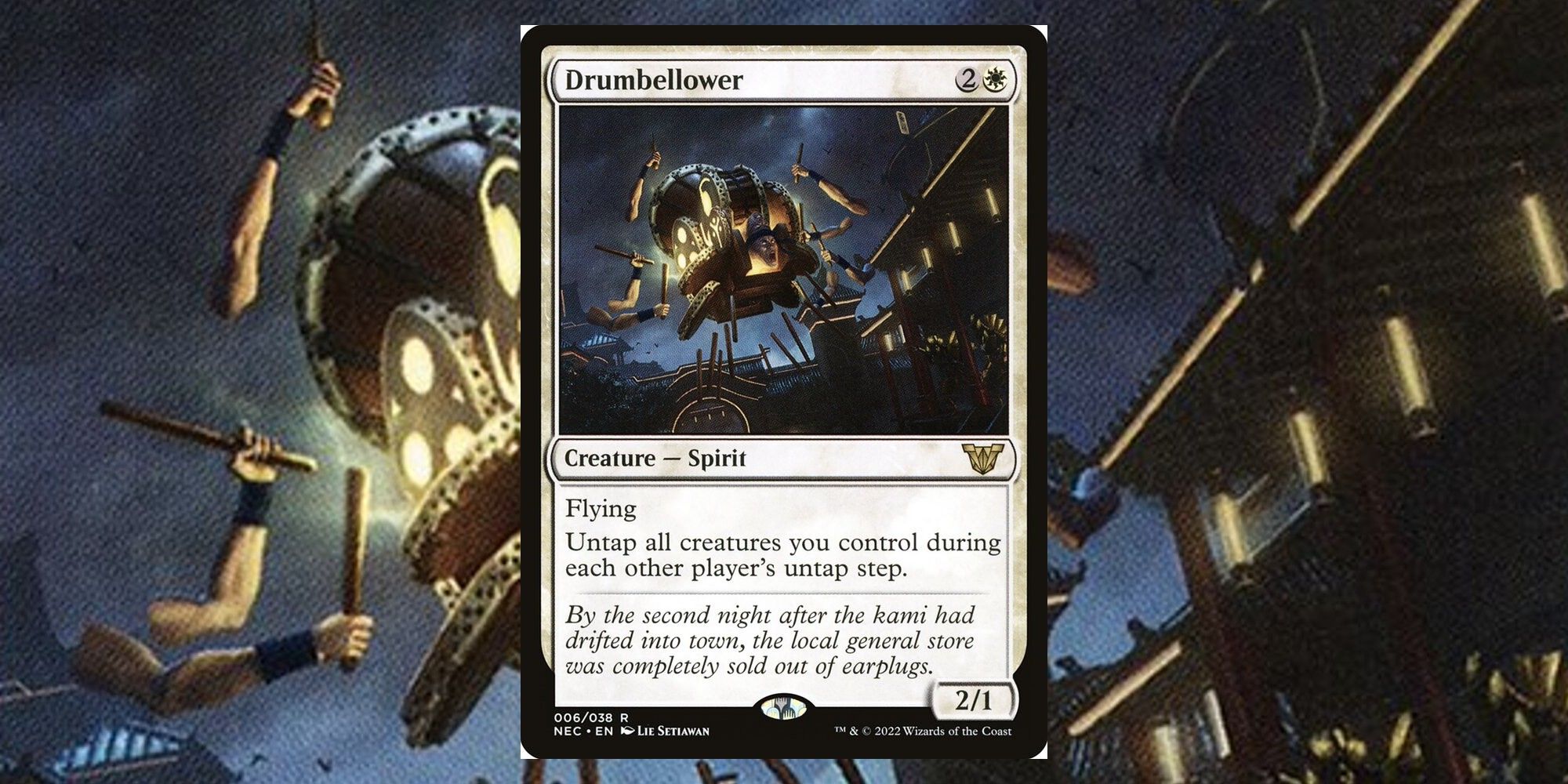 Drumbellower was released with Neon Dynasty’s Commander decks and offers a huge advantage for this deck. It allows you to untap all of your creatures on each opponents’ untap step. When your Commander allows you to tap two of your creatures (you’ll want to tap Emmara) to goad an enemy creature, this is an invaluable ability. Not to mention it gives you blockers every turn, which is huge in the late game. It’s like a makeshift vigilance. Then, if you have any mana dorks or activated abilities, Drumbellower helps. 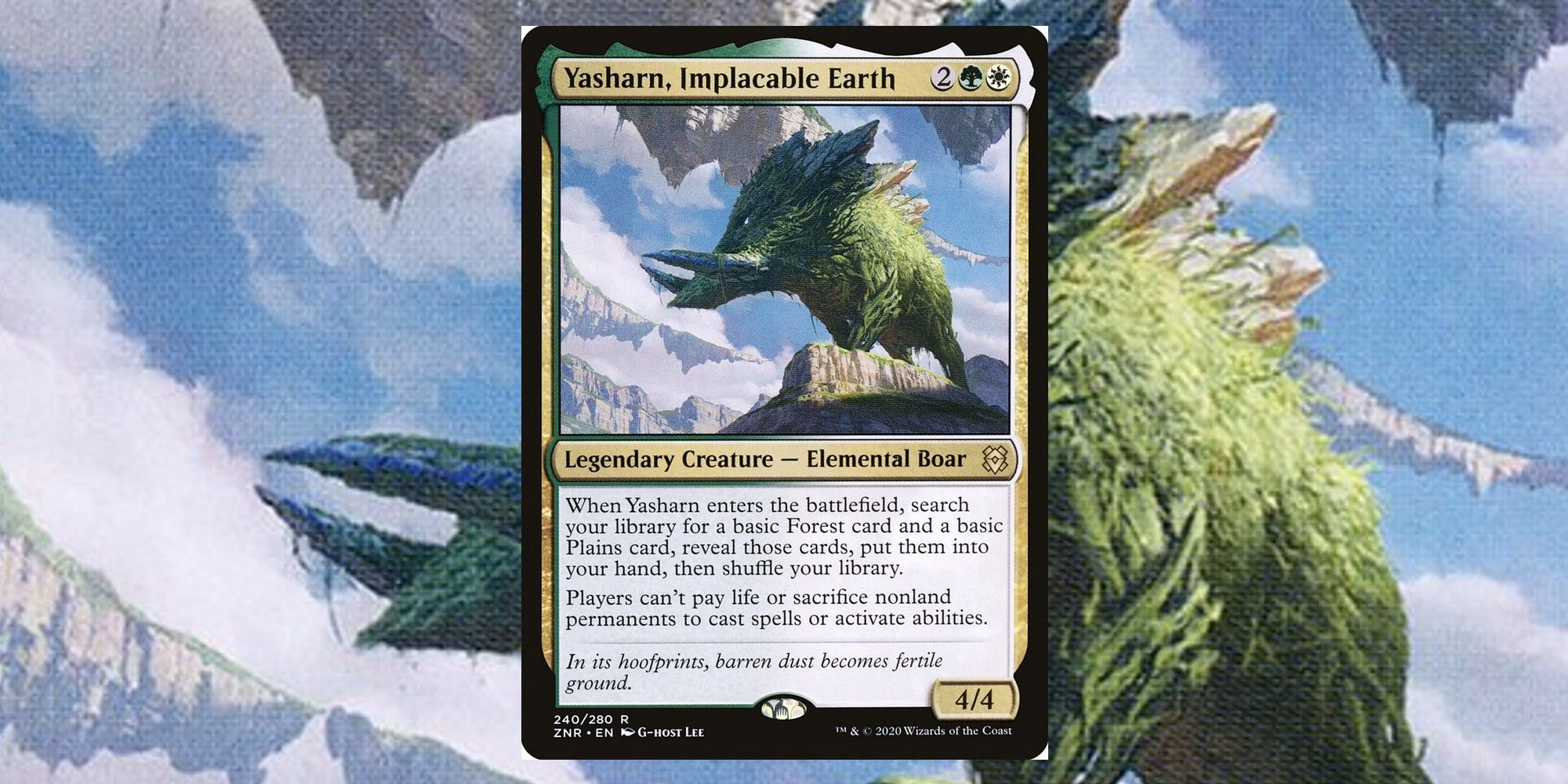 While a great Commander for a Stax deck, Yasharn, Implacable Earth has a place here. Phyrexian mana and fetchlands can be a big issue in Commander. Phyrexian mana allows you to pay life instead of paying mana to cast a spell or activate an ability. So, when it seems like your opponent has nothing to play because they’re tapped out, they surprise you with a Mutagenic Growth. Yasharn likes to keep your opponents honest by preventing them from using their life as a resource.

Opponents that aren't on a budget will have to crack their fetchlands before Yasharn hits the field or after they deal with him. Then there's Yasharn's nice, little card draw ability that allows you to tutor for some land. It could only be better if it ramped you, but drawing two lands when you’re starved for mana is helpful. 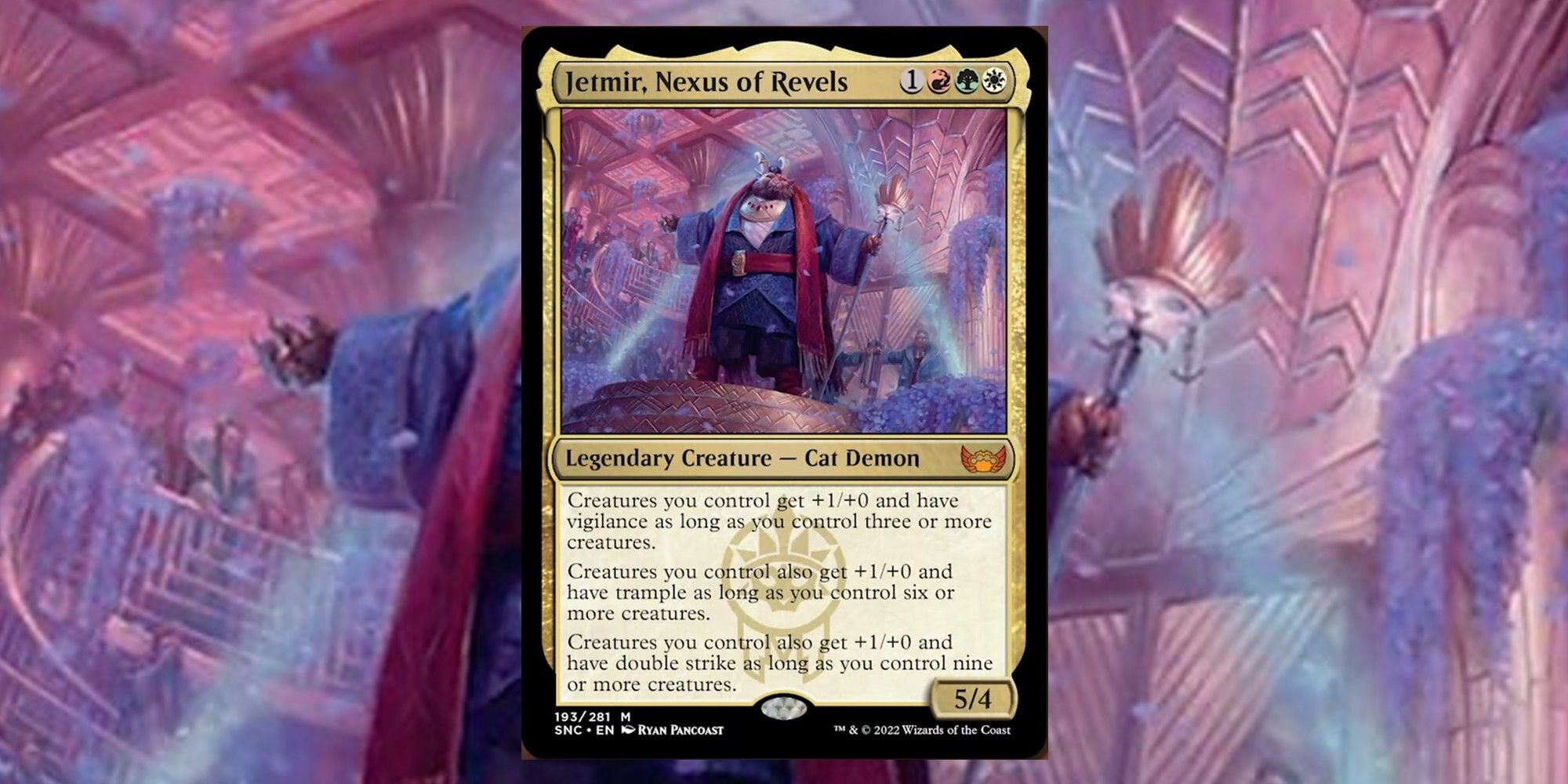 Jetmir is brought to us by Streets of New Capenna’s release and could easily be an alternative Commander here since he's one of the best possible Commanders. He is not a card to be overlooked. His abilities are reliant on the number of creatures you have in play. With a deck like this, you will have a wide field, so there's no doubt you'll utilize every tier of his card.

Having a measly three creatures in play gives all your creatures vigilance. This is good, but you can do better. Get six creatures out and they’ll all have trample, which is huge. However, get nine creatures to land and they’ll also have double strike. This shouldn’t be difficult to attain, but with an enchantment like Assemble the Legion, it’ll be cake. Just don't get the alternate card frame and you're within budget.

2 Impact Tremors: Be Impactful Without Attacking 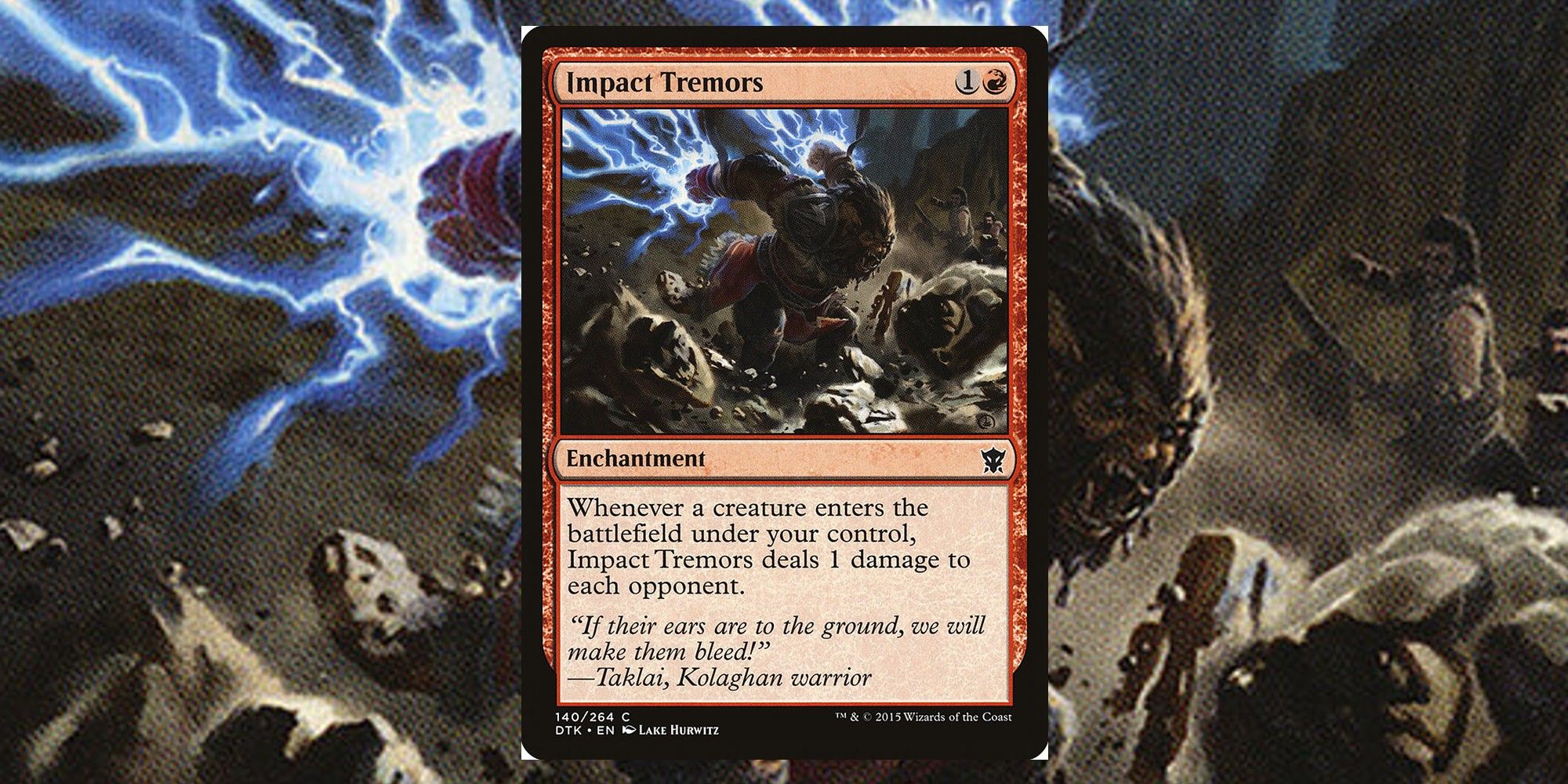 Since you're going to be generating mass amounts of tokens, it would be nice to be able to do something with them while you wait to attack. Impact Tremors lets you do just that.

Cabaretti Cacophony originally plays 22 creatures, so that's 22 points of damage without having done anything. More importantly, Impact Tremors hits all opponents. So, if you happen to be in a multiplayer game, you can rest assured you don't have to target a single enemy. Get Impact Tremors out with the best cards Cabaretti Cacophony has to offer and you'll be dealing out plenty of damage each turn. 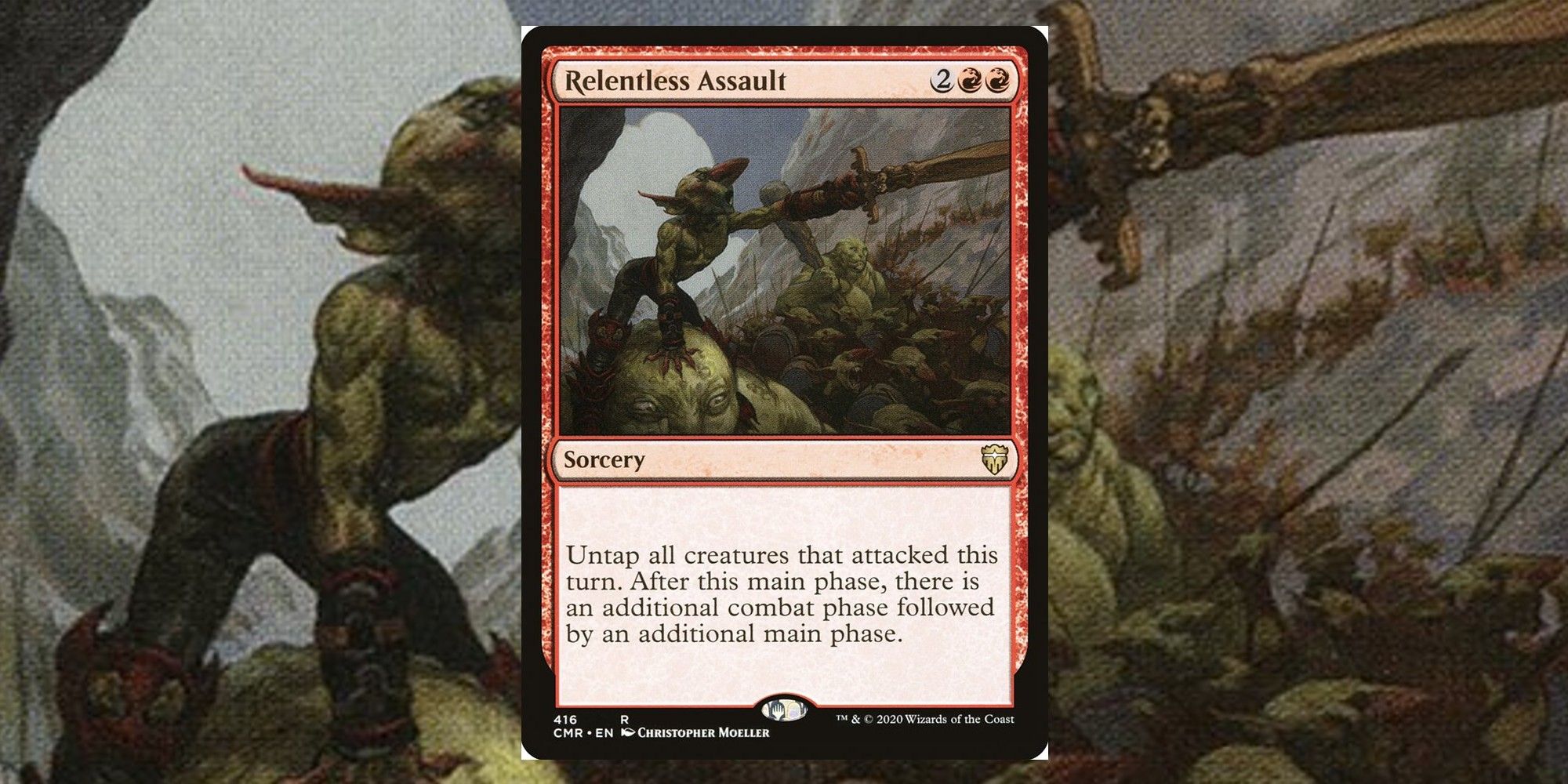 Relentless Assault isn’t the only spell that grants an extra attack with an additional main phase. So jam a few of these into your upgraded deck and it’ll be difficult for your opponents to withstand an endless assault.