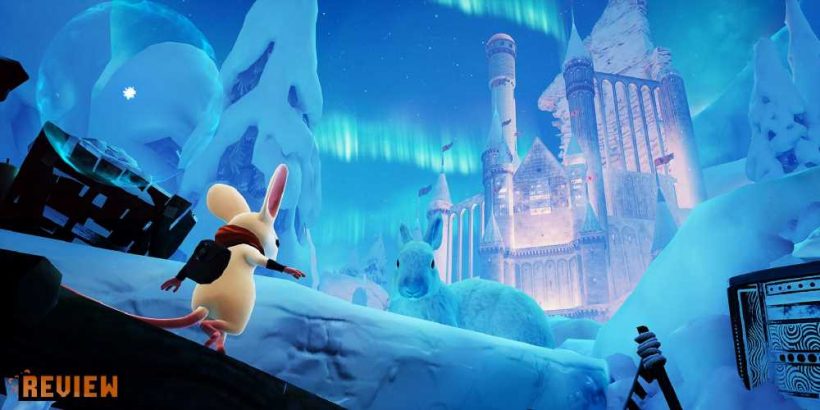 As a child, I visited a local museum that had a large interactive diorama on display. Standing at the table’s edge I could watch while trains, boats, cars, and figurines moved around the miniature town sprawled out before me. There was something particularly memorable about peering into this little town that stayed with me. Watching a world unfold before me that was not my own, but close enough that I could reach out and touch it. That’s what Moss: Book 2 reminds me of.

You play as the Reader, an ethereal looming presence that isn’t truly a part of Moss’ world. There are certain things you can interact with, but there are limits to your powers in this realm. You can look from side to side and feel that same sense of standing on the edge of a diorama and looking in, but with Quill running around the place and excitedly gesturing towards you. It feels real.

The sign of a good VR game is forgetting your own limitations. For a short amount of time, you don’t remember that you’re sitting in your lounge or bedroom as you move and reach out to areas in the virtual world, only to find yourself colliding with some nearby furniture. For a platformer where I thought I’d largely be sitting down, I was surprised to find myself on my feet so much.

You can’t help but stand to get a better look, re-evaluate a puzzle from another angle, or crouch to peer into a small gap to see if a collectible is hidden away. Sure, I had some janky VR moments where I couldn’t quite achieve what I wanted in the first five or so tries, but I’m well aware that with my constant movement, I was probably often straying out of the optimum camera area needed for tracking purposes. 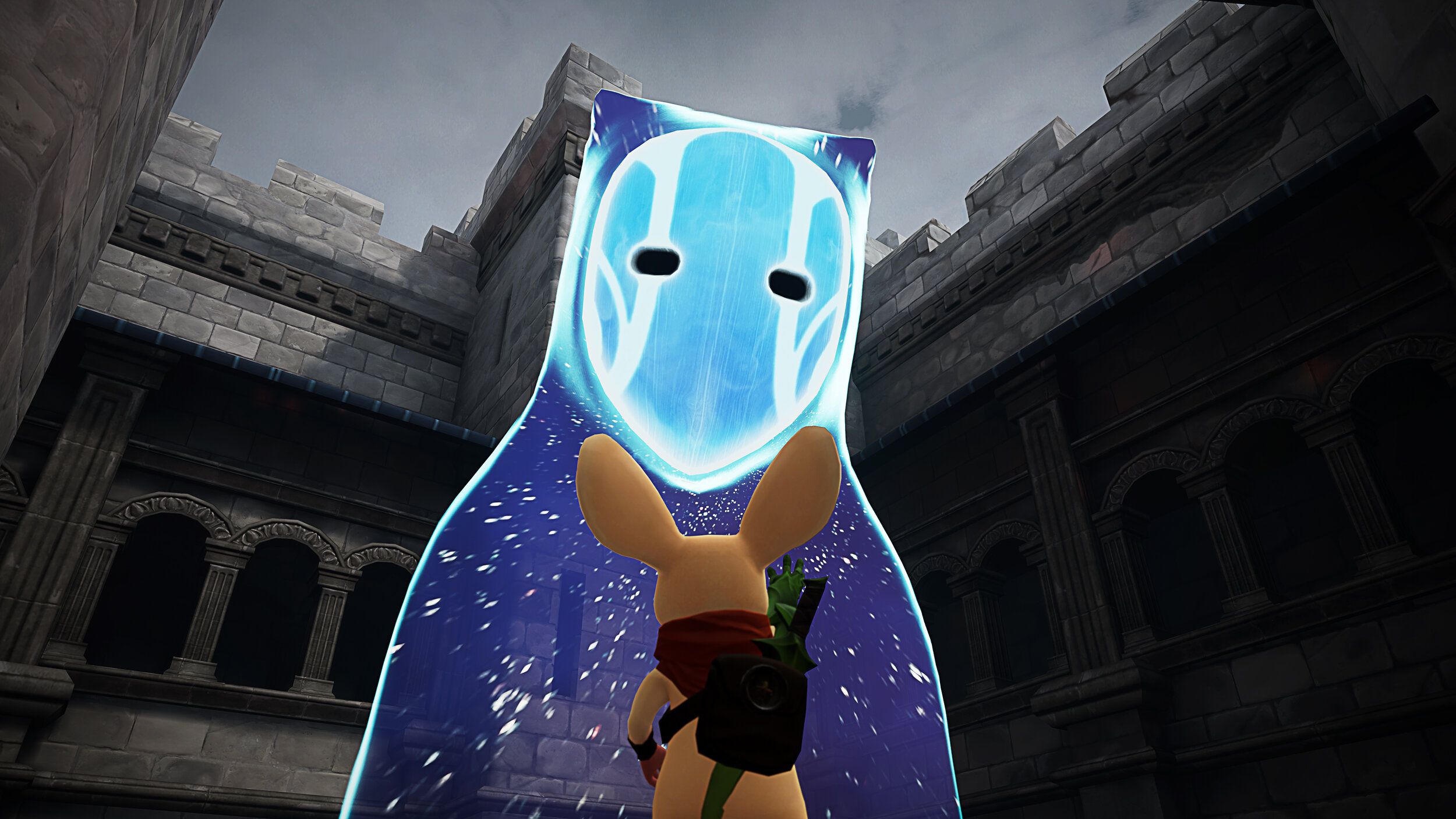 Moss was applauded for its captivating storytelling and the bond players developed with Quill, and Book 2 is even more unforgettable for the very same reasons. Much like the first installment, its story is told through a mixture of flicking through the pages of a book and playing out sections with Quill. All the while, a narrator puts on the different voices of each character, reminiscent of parents or loved ones telling bedtime stories. If you haven’t played the first game, don’t worry, there’s a recap at the beginning, with this sequel seeing Quill aiming to take down the rest of the Arcane army to save Moss.

Any tale that gives me Redwall vibes is an instant win anyway, but I dare you to not be incredibly charmed by this brave little mouse who is so full of character. Small interactions such as seeing her happily dance when she’s won a fight, gesturing to different objects to guide you, or when she beckons you to high-five her, all create a real sense of personality.

In a tale of a hero overcoming the Arcane army to save the world, it’s not always happiness and cute little mouse antics. There was a particular part where, as I watched Quill’s body heave as she sobbed her heart out, I couldn’t help but reach out to her. Of course, I couldn’t really help her, because I wasn’t really there, but at that moment, I realised just how emotional I was becoming about this digital creature.

There is real depth to the world Polyarc has created, not only are there beautiful and highly-detailed environments to explore, there’s a feeling of life around you. Aside from the characters you’ll be controlling and interacting with, there’s a natural movement to the world in the breeze moving foliage, while in the background you’ll often catch glimpses of deer grazing, and small props like paintings and discarded personal items make the world feel lived in. 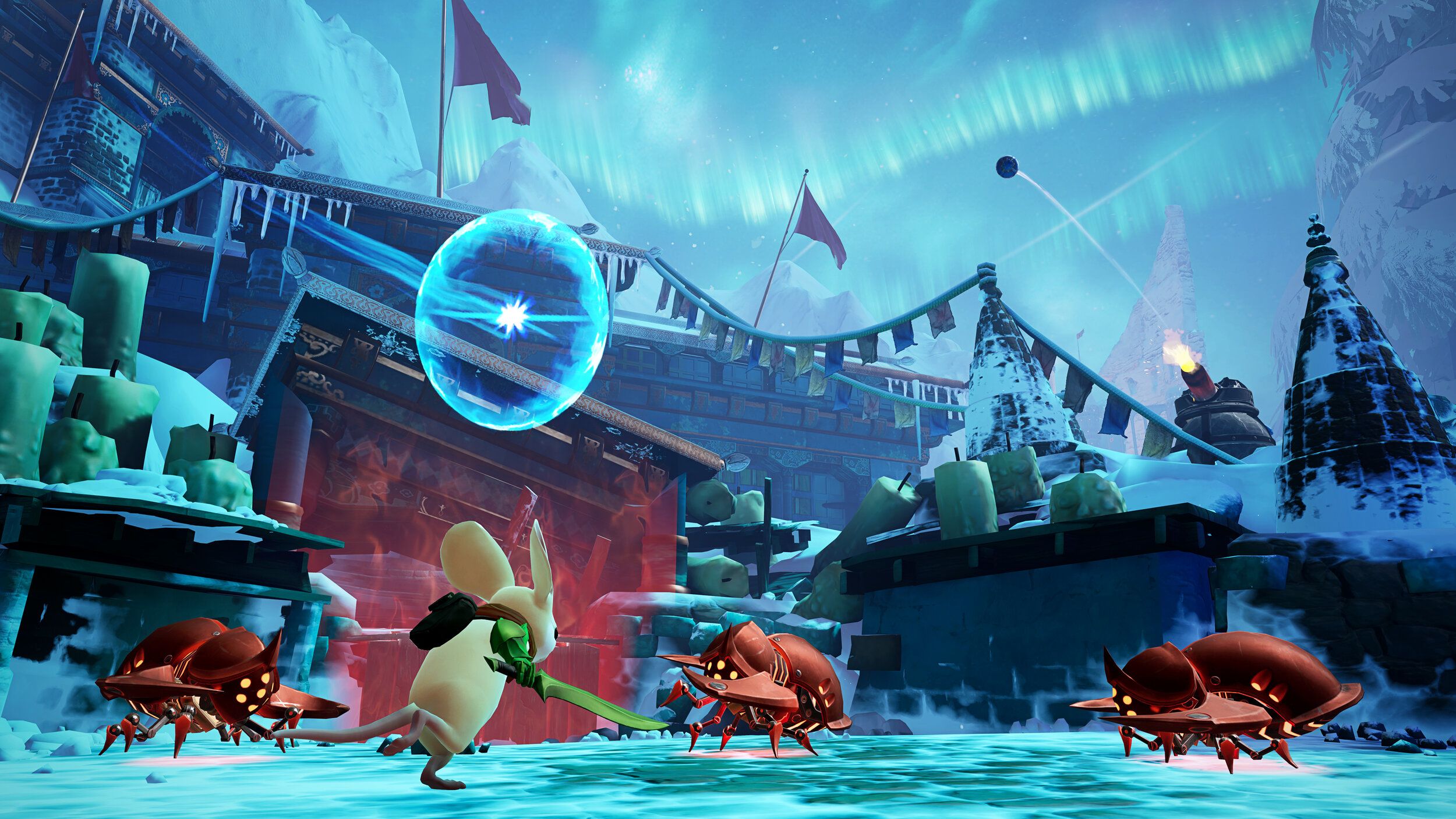 Book 2 takes you to brand new locations, such as the heated depths below the castle all the way to snowy mountaintops. These offer new elements to marvel at, such as ice that breaks beneath your feet or the drip of molten metal with the potential to burn you. One of the things I loved most was how you could look back and see the areas you’d just completed, or look forward and see what was to come. It made everything feel connected, rather than feeling like you were just playing level by level in a rigid, formulaic way. Once again, Moss: Book 2 managed to feel alive like few games in VR do.

With this wide new world comes a number of new ways to interact with it. Your ever-faithful companion Quill will unlock different weapons as you progress, which not only help her in battle but are also used to solve various new puzzles. For example, the sword power-up can help you to dash across large spaces to reach other areas, while the chakram lets you unleash your inner warrior princess and can be summoned back to you after being thrown to hit trickier targets.

There’s a nice balance to the puzzles in Moss, they’re not so easy that you’re breezing through them — there were definitely a few times I had to stop and consider what I needed to do — but they’re also not so challenging that you grow frustrated. The end result leaves you with a sense of accomplishment once you’ve figured it out. 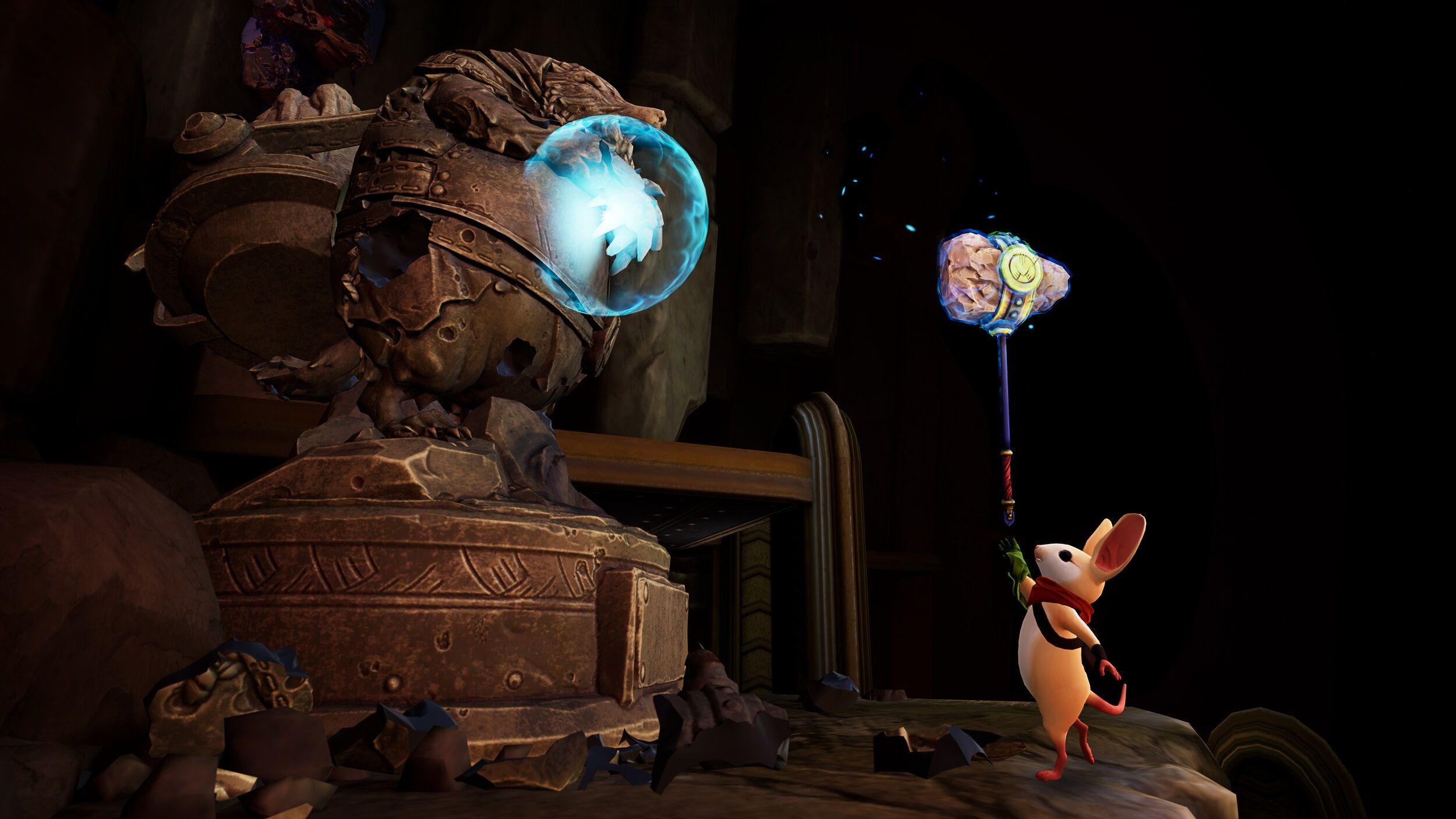 Quill isn’t the only one getting upgrades either, the Reader obtains the power to encourage growth. You can interact with nature in various scenes to cause trailing flowers to flourish so Quill can climb them, or reach out and grab a vine that you can stretch to create a bridge. When Quill unlocks the hammer, she can charge it to create a ghostly hammer for the Reader to interact with too, taking your partnership to the next level.

One of the many ways in which Book 2 surpasses the original is how players are now able to revisit previous locations. Not only does this add an extra layer of worldbuilding, but there are also various rewards awaiting completionists and curious adventurers with newfound upgrades and extra items in their arsenal.

Enemy variety is vastly improved this time around too, some of which can only be defeated with specific weapons. Combat feels more dynamic because you can change your weapon on the fly via the radial menu, though I do wish this was an easier process. Once the menu is open you have to grab the weapon and give it to Quill, so you end up fumbling a bit to change weapons mid-battle while Forged enemies are still hitting your little mouse buddy. It would have been better to rotate between weapons at the press of a button, such as shifting between directional buttons.

There are new ways for the Reader to interact with enemies too, so as well as smashing beasties with Quill’s ghostly hammer, you can grab the pillbug-like Ripper and pinball it at targets or other enemies, or you can take control of a Bomber and blow up targets of your own choosing. 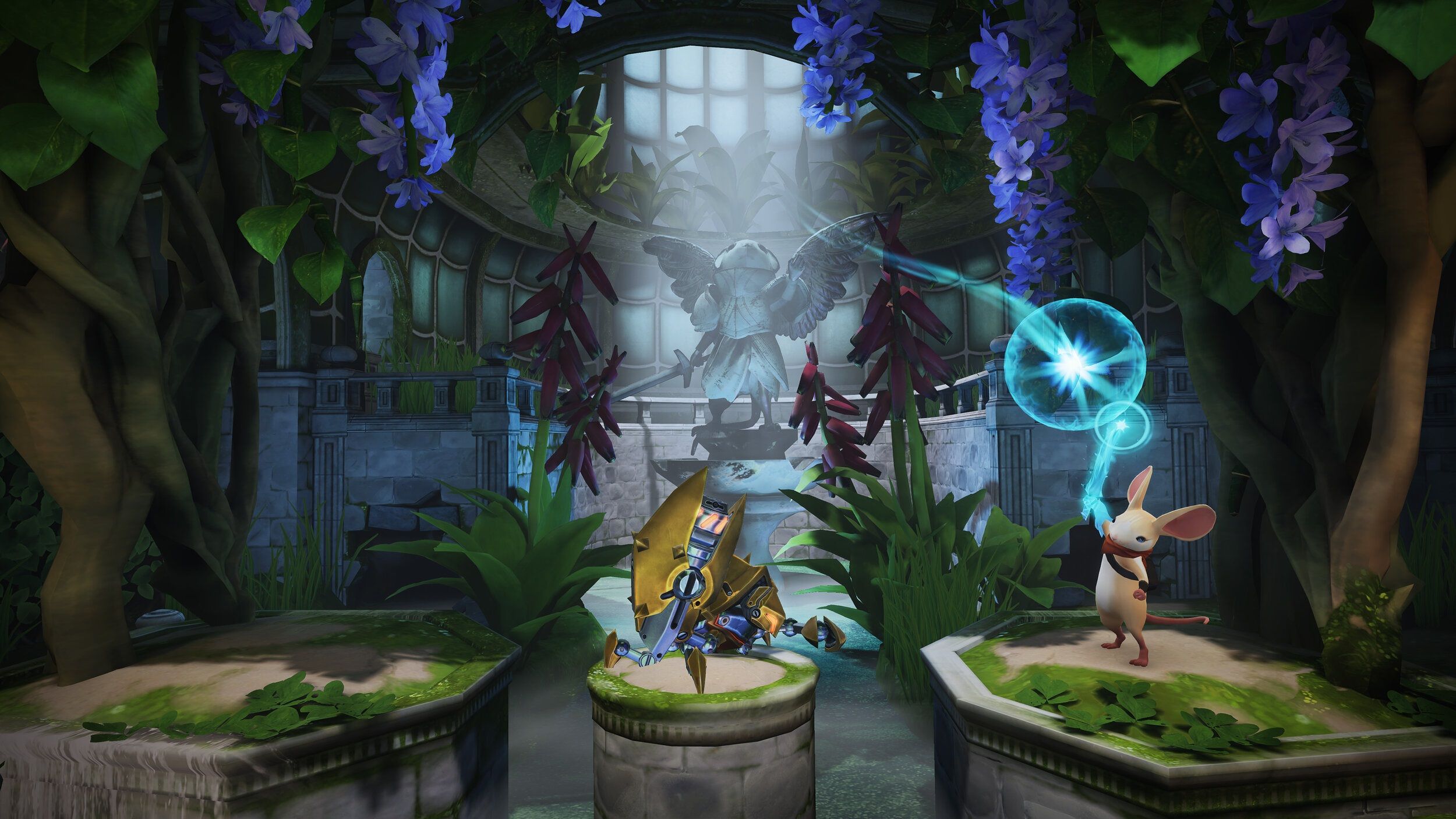 One of the first game’s defining moments was the climactic battle with Sarffog, so I was really pleased to learn the sequel has even more larger-than-life bosses. In addition to your final showdown with Tylan, you can look forward to dealing with another notable member of the Arcane army. These boss battles are not just straight-up combat, there’s much more puzzle-solving to them than your usual stab until it dies.

I don’t want to get into any details that would spoil anything, but about halfway through the game, there is a nice surprise that offers a fun change of pace for a short time. The final area of the game was my favourite by far — the Labyrinth-related trophy was definitely appreciated — and the very final scene where you close the book has a certain detail that was a very nice touch.

Moss: Book 2 builds on the original in every way to create an unforgettable experience. The world is bigger, more beautiful, and areas can be re-visited and explored with new tools and an even greater purpose. New enemies, weapons, and abilities make combat and puzzles more varied and interesting, but most importantly, it delivers yet another stunning tale with the loveable Quill at your side. It’s undoubtedly one of the best PSVR games available and the perfect choice for anyone who loves platformer puzzle games.

Score: 4.5/5. A review code for PSVR was provided by Polyarc.