Want to blow up Mortal Shell baddies with the Ballistazooka? Who doesn’t? Read on to find out how.

Mortal Shell goes for the less is more approach when it comes to weapons. There are only a handful in the entire game, and at first glance it might appear like there’s no ranged options available at all. But if you notice the Large Bolt ammunition you can purchase and pick up throughout the game, you know that can’t be the case. The one ranged weapon in Mortal Shell, called the Ballistazooka, isn’t acquired like the other weapons in the game. If you want to get your hands on this awesome-sounding ranged option, follow the steps in this guide.

Buy The Tools From Vlas 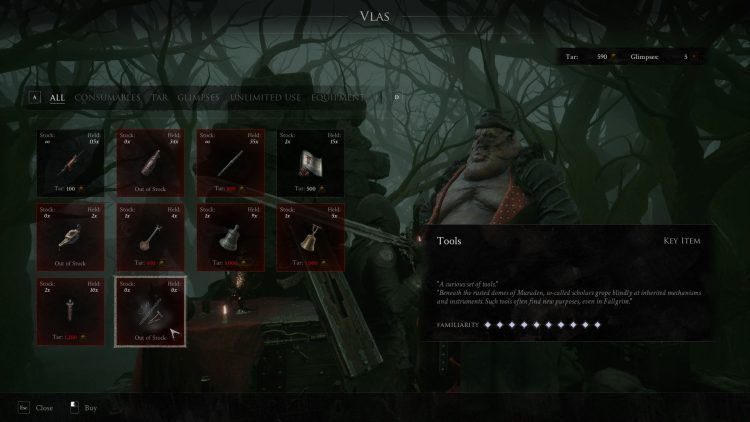 The Ballistazooka itself isn’t actually an item you need to find, but simply repair. The first step in repairing it is to buy the tools to do it from the vendor Vlas. If you’re unfamiliar, Vlas runs his shop in Fallgrim Tower not far from the Old Prisoner and the Sester. Just head up the stairs from them, through the door by the bench you upgrade your weapons at, and through the hole in the stone wall leading to the giant bell. Vlas has set up shop at the top of the stairs here with his little black cat.

Among his wares you will find the item simply called “Tools.” These are required to repair the Ballistazooka, but will set you back a whopping 8,000 Tar. Hopefully you have enough saved, or have enough Tar consumables stocked up to afford it. He also sells the Large Bolt ammunition for the Ballistazooka if you ever need to restock. 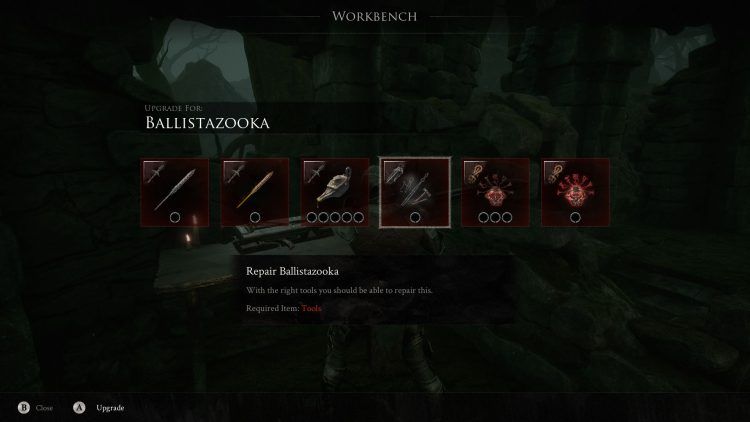 Now that you’ve purchased the tools, make your way back down to the workbench you passed where you upgrade weapons and interact with it. A new option to repair the Ballistazooka will now be available. Hold the upgrade button and you will have a brand new range option for your arsenal.

You will bring up the gun by pressing down on the D-pad, and are immobile while aiming and firing. While it can do some decent damage, you only get one shot before a very lengthy reload animation leaves you completely vulnerable to enemy attacks, and actually hitting with the thing isn’t easy. All in all, for the price it costs to get, and how few occasions it will actually be useful for, getting this weapon should only be considered if you’re a completionist or have nothing left you want to spend your Tar on.