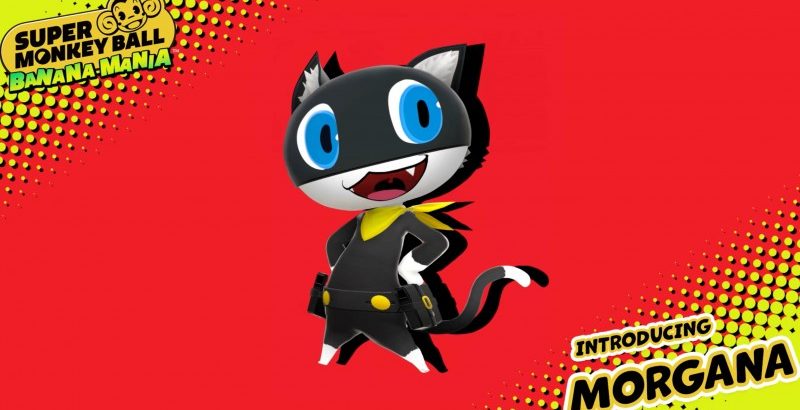 The announcement of Super Monkey Ball Banana Mania, a modern remake of the first three games, delighted fans of the series’ heyday when the news broke in June. Not only is Sega paying loving homage to the most well-liked entries in the Super Monkey Ball series, but the team has rolled out announcements of guest characters that include other Sega icons like Sonic, Tails, Kazuma Kiryu from Yakuza, and Beat from Jet Set Radio. During today’s Gamescom Opening Night Live stream, Sega unveiled that it’s adding another beloved Sega character to the mix as post-launch DLC.

Morgana, the cat-like Phantom Thief from Persona 5, is the latest character to be announced for the remake compilation. The treasure-obsessed heart-taker joins the roster of playable characters that includes the six core members of the monkey gang – AiAi, MeeMee, GonGon, Baby, Doctor, and YanYan. Morgana, who will be paid, post-launch DLC, is playable in every main game mode, but instead of collecting bananas, he collects treasure chests. Morgana will be $4.99 when he releases as DLC on November 2, just under a month after the game launches.

This is far from the first guest appearance the Persona 5 crew is making in other games. While the most high-profile cameo is undoubtedly Joker’s arrival as a playable fighter in Super Smash Bros. Ultimate, the Phantom Thieves or elements of their attire have appeared in games like Sonic Forces, Catherine: Full Body, Puzzle & Dragons, Phantasy Star Online 2, and more.

You can see all 12 Party Games coming to Super Monkey Ball Banana Mania in action through a second trailer that debuted during Gamescom Opening Night Live below. I’m personally super excited to relive my glory days in Monkey Target.

Super Monkey Ball Banana Mania launches on October 5 for PlayStation 5, Xbox Series X/S, PlayStation 4, Xbox One, Switch, and PC. The Xbox version utilizes Smart Delivery, giving you the correct version for your console at no additional cost, while PS4 owners can upgrade to the PS5 version at no additional cost. The console version costs $39.99, while the PC version is discounted to $29.99 and is available through Steam. You can also opt to grab the Digital Deluxe version for $49.99 if you so choose.

Morgana will cost $4.99 when he launches on November 2.