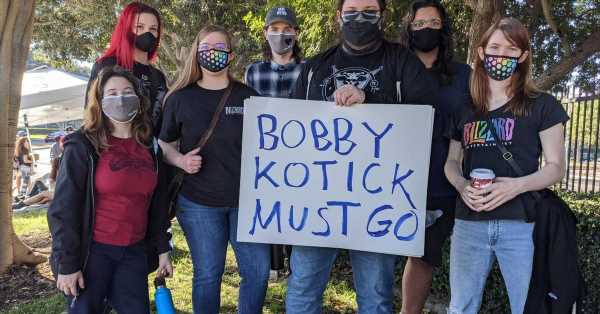 After walking out of work on Tuesday, Activision Blizzard workers are rallying together to call for CEO Bobby Kotick’s resignation. More than 700 employees, across all studios and departments, have signed the petition. The number of signees continues to grow as the petition circulates.

“We, the undersigned, no longer have confidence in the leadership of Bobby Kotick as the CEO of Activision Blizzard,” the employees said Thursday.

The information that has come to light about his behaviors and practices in the running of our companies runs counter to the culture and integrity we require of our leadership—and directly conflicts with the initiatives started by our peers. We ask that Bobby Kotick remove himself as CEO of Activision Blizzard, and that shareholders be allowed to select the new CEO without the input of Bobby, who we are aware owns a substantial portion of the voting rights of the shareholders.

The push for Kotick’s removal comes after a new report from the Wall Street Journal uncovered the wide extent of Kotick’s knowledge regarding employee misconduct and sexual harassment, as well as the news of pay inequity between Blizzard co-leaders Jen Oneal and Mike Ybarra. Before her resignation, Oneal — Blizzard’s first female co-leader — was not offered the same salary as Ybarra, until she told the company she was quitting.

Multiple sources expressed distrust in current Activision Blizzard leadership, as well as the Board, following a California Department of Fair Employment and Housing lawsuit filed this year. (Multiple lawsuits and investigations have been ongoing, and one settled, related to the public allegations.)

Activision Blizzard employs nearly 10,000 workers, according to the company. This is not the first time Activision Blizzard workers have made demands of their employers. Thousands of current and former workers signed an open letter to executives in July, after the lawsuit. Frustrated by the initial “tone deaf” response to the allegations, in which executives called the allegations “distorted, and in many cases false, descriptions of Blizzard’s past,” workers called for their demands to be met. Kotick addressed some demands in October, introducing a “new zero-tolerance harassment policy” and waiving the forced arbitration process the company uses to handle sexual harassment and discrimination complaints. Kotick also said at that time that he’d take a major pay cut, downsizing his $875,000 annual salary to $62,500; it had already been reduced from $1.5 million earlier in the year. The Journal reported that Activision Blizzard announced these new measures only after its journalists approached the company with questions related to Tuesday’s report.

Activision Blizzard workers told Polygon that the company’s denial of the Journal’s report harkens back to the initial response — once again implying that any allegations are “distorted and untrue.”

“We need to trust in our leadership,” Blizzard software engineer Valentine Powell told Polygon at Tuesday’s walkout. “To an extent we have trust in our direct leadership — the people that we work with every day who are trying to solve the problems. But when it comes to Activision Blizzard, just time after time, they keep losing trust with us. They keep denying claims. They keep telling us that we’re wrong. […] But when it comes right down to it, we need a systemic change. We need the ability to have transparency in what’s happening.”