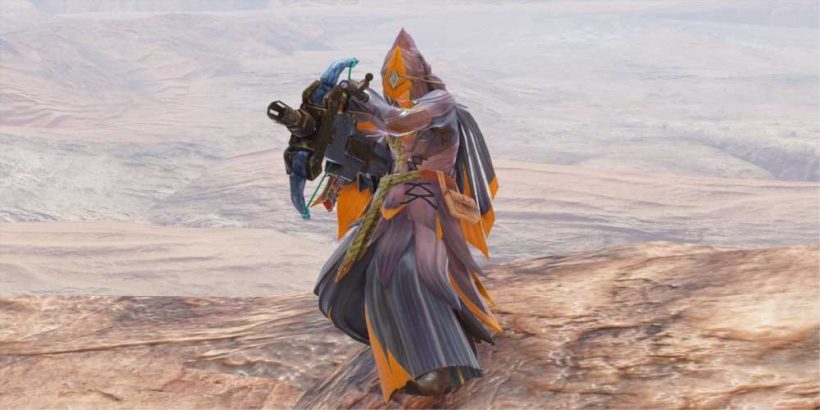 In Monster Hunter Rise, you have quite a lot of ways to customize your character. One of the most notable ways is your choice of weapon, and there are plenty to choose from. The Light Bowgun is one of the three ranged options that the game has to offer you, and it's probably the most beginner-friendly one.

Featuring a ton of ammo types to experiment with, great mobility options, and an easy-to-use control scheme, the Light Bowgun is the perfect partner for a newbies and veterans alike. 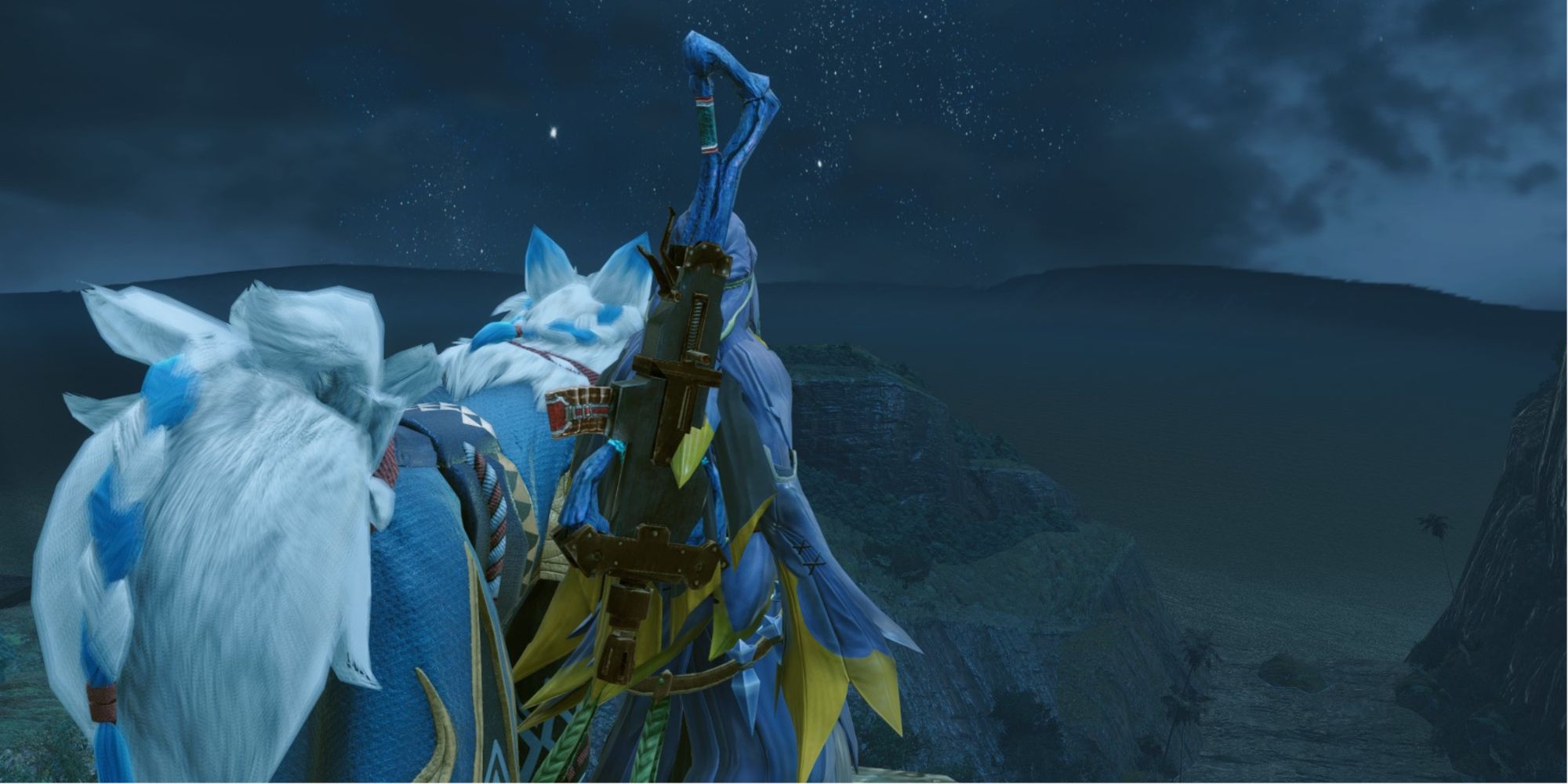 The Light Bowgun is an accessible, easy-to-learn ranged weapon in Monster Hunter Rise. It lets you attack from afar and gives you a ton of options for dealing with the game's threats.

The control scheme for ranged weapons is a little different from the scheme for melee weapons:

Despite being a ranged weapon, the Light Bowgun has some decent close-range damage options in a pinch. Hit X/Y + A/B to execute a quick slam with your Bowgun. Additionally, your aerial X/Y attack is a pretty powerful downwards slam, which is useful for opening battles from above or fishing for mounting opportunities.

Part of the strategy when it comes to using a Light Bowgun is switching ammo on the fly to adapt to the situation at hand. There are many different types of ammo, all of which have different purposes in a fight.

Light Bowguns are limited in the ammo types they can use, and how they can use them. You'll want to consider this when picking a Light Bowgun for any particular fight.

If you're planning on maining the Light Bowgun, you'll want to have a wide collection of them so you can plan your hunts based on the ammo you'll need.

In the table below, every type of ammo is listed along with its effects and how many you can take into a hunt. Some ammo types have multiple levels of strength, these are listed after the name.

Light Bowguns do not only vary in the types of ammo they can use, but also how they use them. Next to each ammo type in the Equipment Info screen and in the ammo selection box there are four slots that may be filled with icons. These dictate how an ammo type may be used in combat:

While ammo choice and variety will be the biggest deciders in your choice of Light Bowgun (or aesthetics, if that matters to you!), there are some other factors that will vary from weapon to weapon. 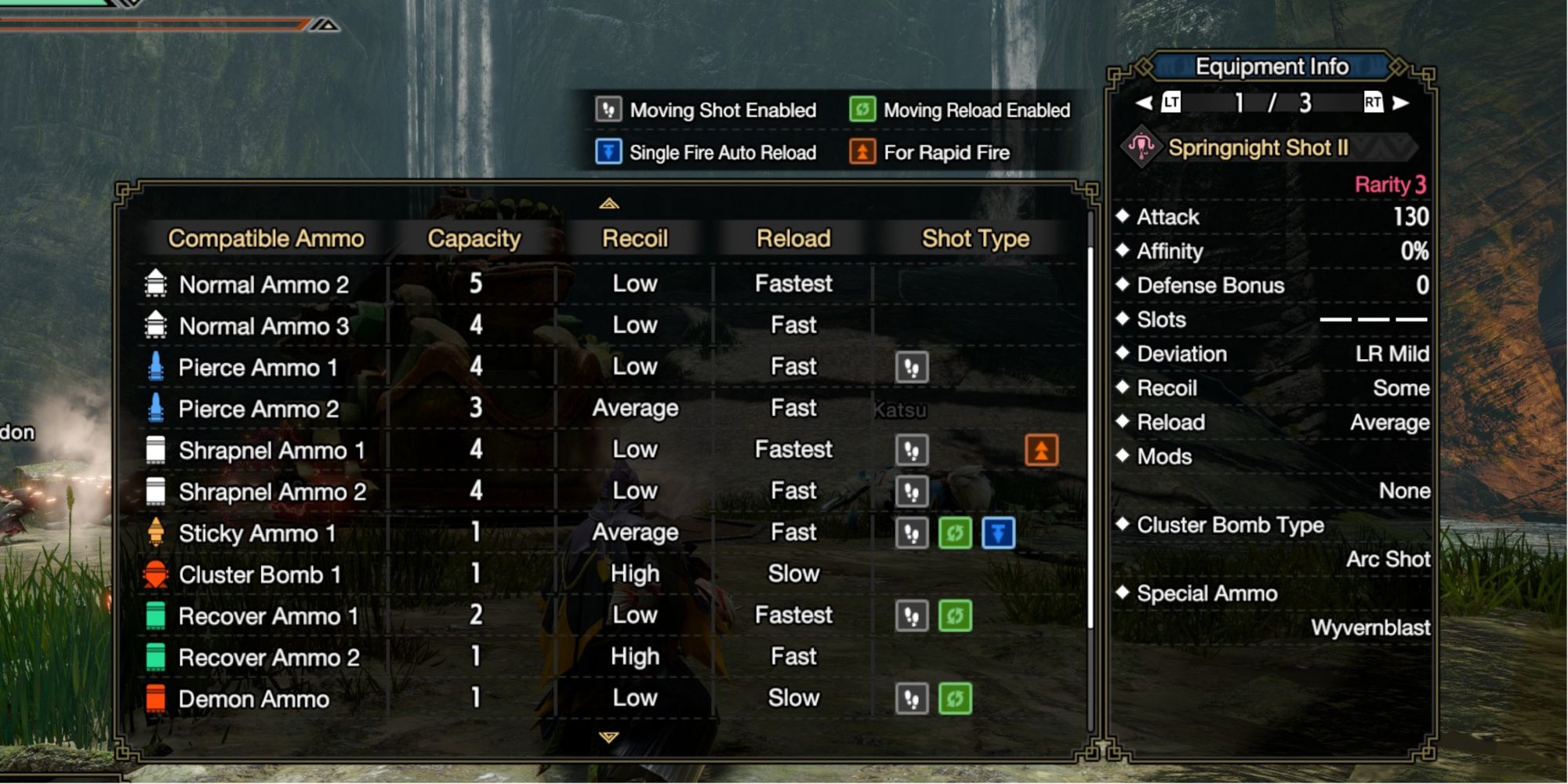 It's important to know that while every Light Bowgun has its own stats for these variables, all ammo types have their own ratings for Recoil and Reload. To view these, open your Equipment Info screen with a Light Bowgun equipped and then open the Ammo Details menu (Y/X).

In the Smithy or the Manage Equipment menus, you can Customize your Bowguns. Light Bowguns have two possible mods that you can add, free of charge:

Hitting A/B will let you place explosive flares in the ground. Once placed, they will explode whenever a monster touches them or you fire any type of ammo at them. Flares can explode a few times before disappearing.

Silkbind Glide (RB/R + X/Y): This move pulls you along the ground at great speed, which is great for getting around a battlefield without putting your weapon away. If you hit ZR/RT during or immediately after this move, you'll execute a strong, close-range attack.

Fanning Vault (RB/R + A/B): This move pulls you up into the air at great speed. This is a great way to attack enemies from above – you can aim and fire in the air, and even shoot Wyvernblast flares directly underneath you.

Fanning Maneuver (RB/R + A/B): This move will anchor you to a point just ahead of you before swinging you around to the side. This move is great for getting out of the way of telegraphed attacks, but is harder to shoot during compared to Fanning Vault. However, this ability does give you a temporary attack boost. 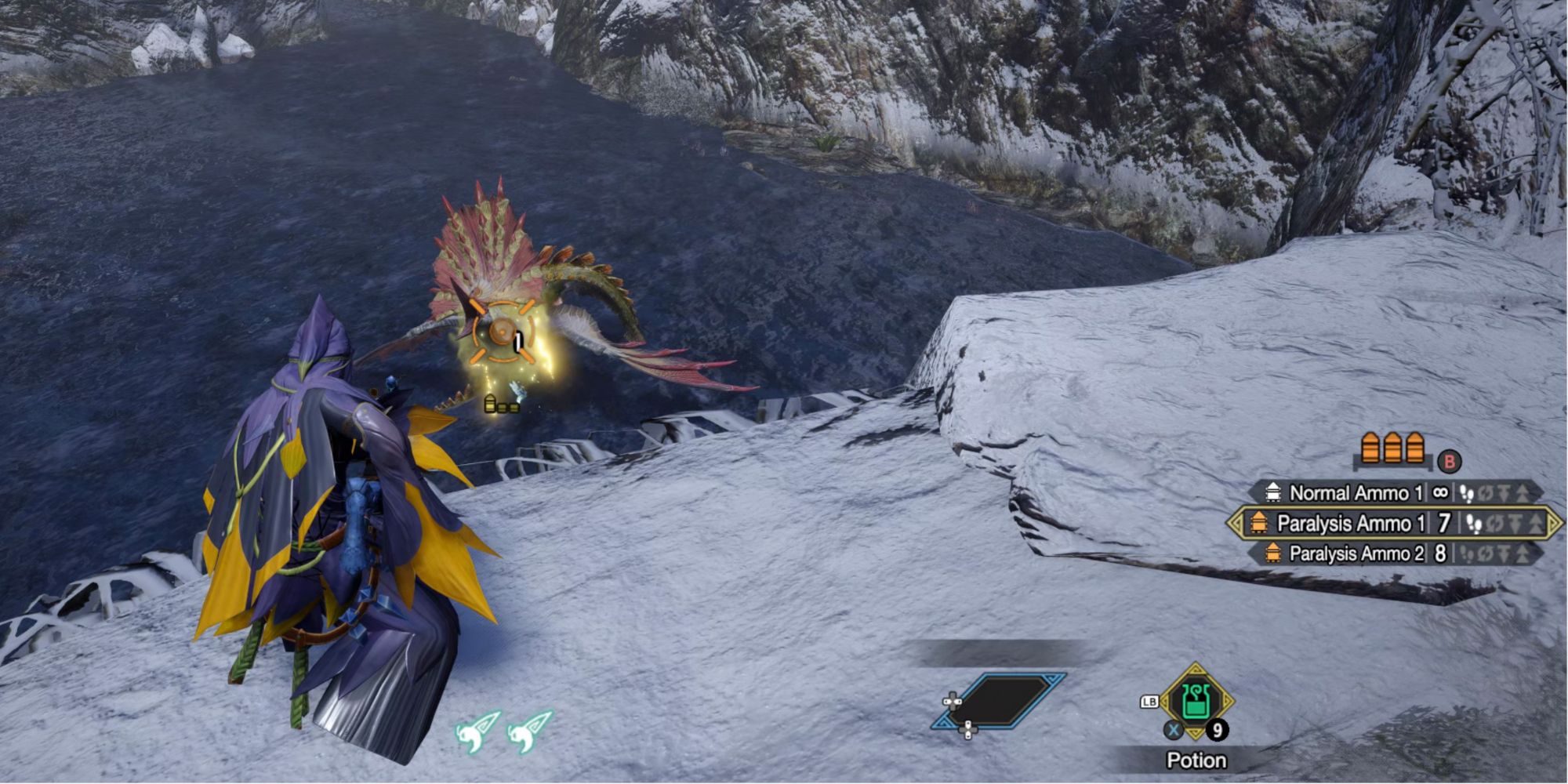 Head To The Training Area

The training area (accessed via the Buddy Plaza) is always useful, but this is exemplified when it comes to ranged weapons. The reason is that you're given unlimited ammo for every variety that your current weapon can use.

This means you can experiment freely when you try out new Light Bowguns, seeing how they feel without worrying about how costly ammo is.

Craft Ammo In The Field

Running out of ammo during a difficult hunt is one of the biggest risks when it comes to being a Light Bowgunner, especially if your aim isn't terribly good.

You can only take a certain amount of ammo with you on missions, but there's nothing stopping you from also taking the constituent materials to craft them during the hunt.

Alternatively, you can always fast travel back to camp and pick up more ammo from your chest!

Use Height To Your Advantage

If possible, get up high and shoot your enemies from afar. While being far away will reduce the damage you inflict – the Light Bowgun is hardly a sniper rifle, after all, you'll be able to inflict status ailments in relative safety. 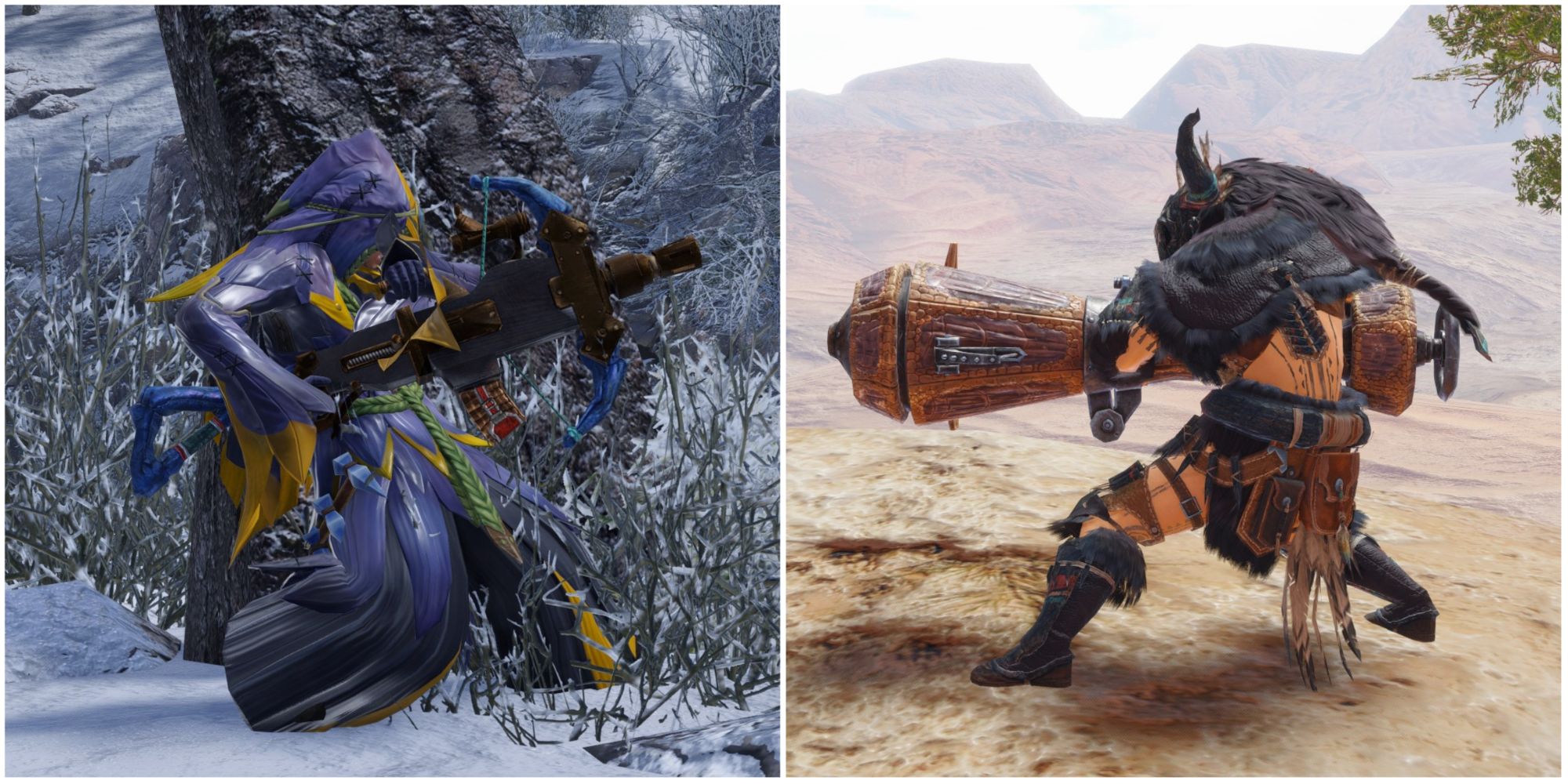 The Light Bowgun and the Heavy Bowgun are very similar weapons. They are both ranged powerhouses that use the same ammo types – but there are significant differences that may help you make a decision between them.

At the end of the day, the weapons are quite similar, and becoming proficient in one will help you when you try out the other. Ideally, you'll be able to master both!