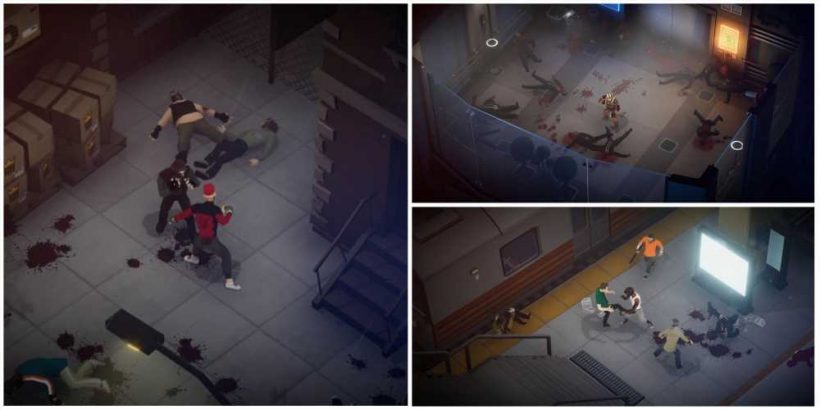 Midnight Fight Express offers a robust combat system that has you constantly bouncing from enemy to enemy with flashy punches, kicks, and grapples, allowing you to live out your John Wick fantasy in a bizarre and action-packed world. No matter the situation, there's always something for you to get your hands on to gain the upper hand and annihilate some baddies in a gruesome fashion.

Playing through the story, earning Skills, and using them to add further mayhem into an already chaotic game is an excellent way to see yourself improve and get better at the fast-paced action of Midnight Fight Express. You are never out of the fight, even if your back is against the wall. 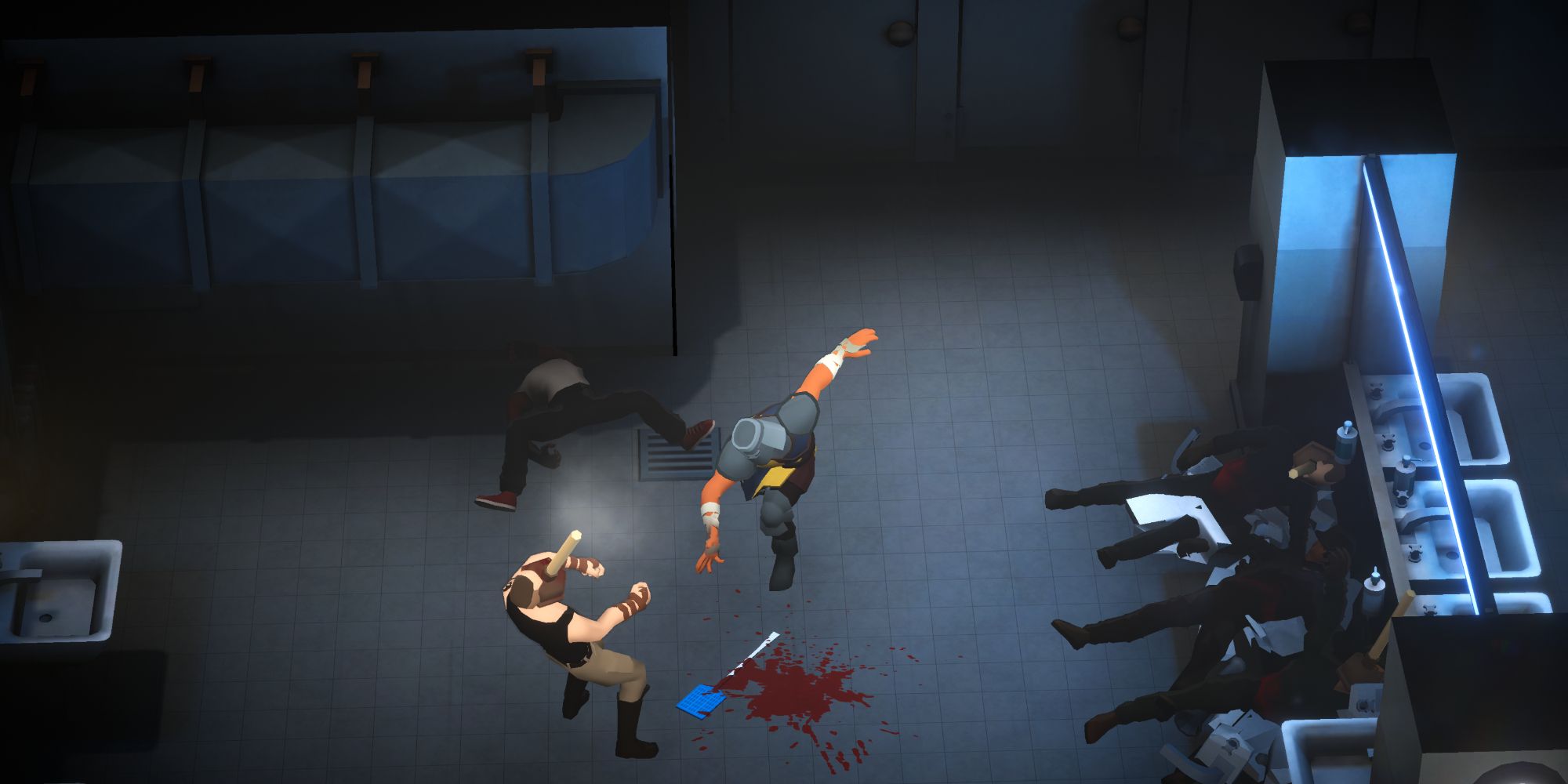 Since combat is Midnight Fight Express's main focus, there are several ways to approach each situation thanks to its deep and robust systems. While you won't have access to everything the game offers right from the jump, clearing a mission will reward you with one Skill Point, allowing you to cash it in for a new ability to incorporate into your playstyle. There are forty Skills you can learn and forty missions, meaning you cannot unlock every ability until you have finished the main story.

Furthermore, as you progress through the game, you will gain access to other Skill Trees, such as the Secondary Gun and Rope trees, allowing you to weave unique and devastating actions into your combos. These can all be a bit much to take in at first, and trying to remember how to pull off each Skill can be tricky, but once you get the hang of things, you'll dominate the streets in style. 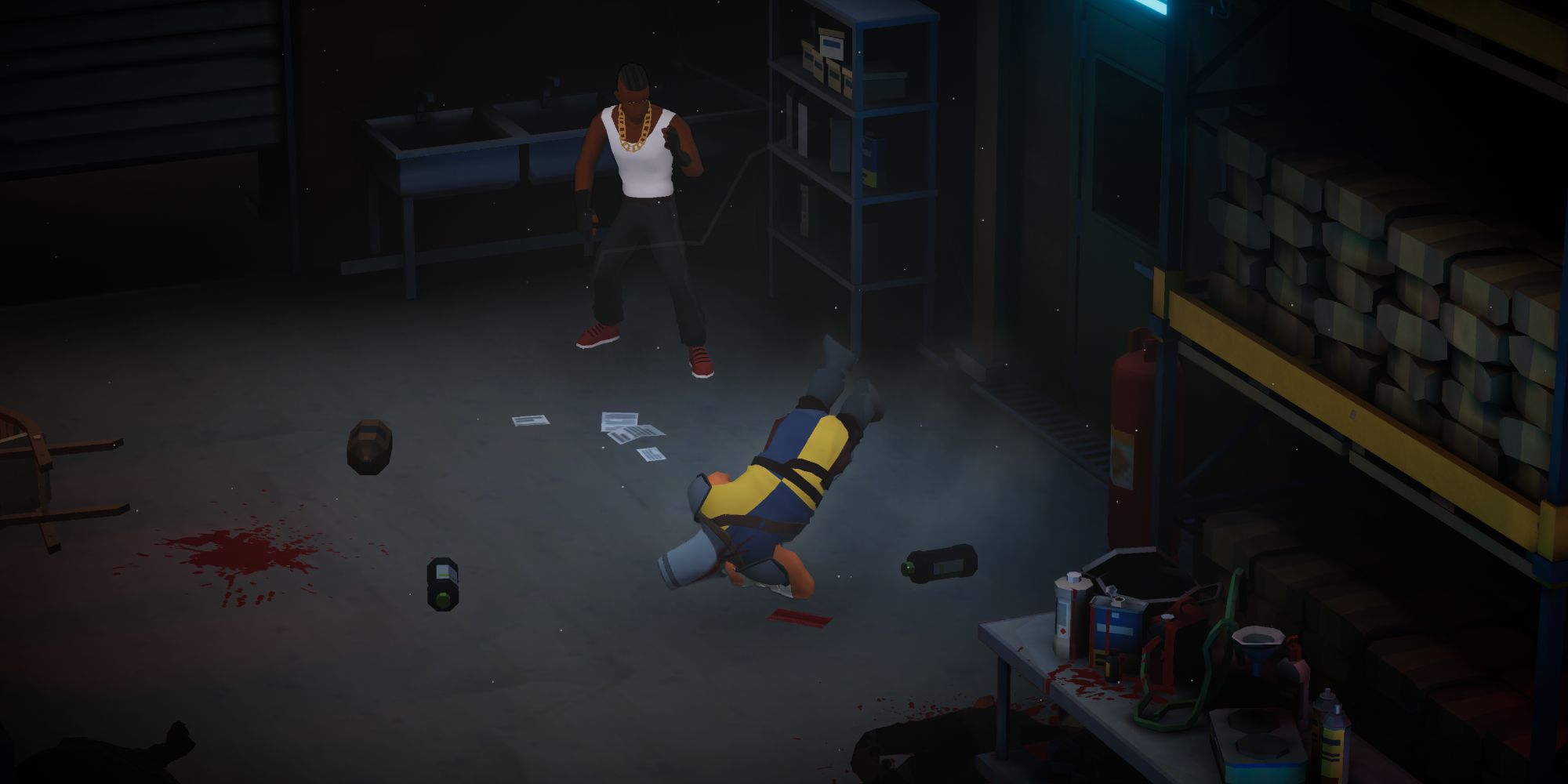 Despite Skills being the driving force of your offensive and defensive prowess, one of your best actions is your ability to roll and evade incoming enemy attacks, allowing you to create space or close the gap in the blink of an eye. Rolling is almost always the safe bet whenever things get hairy, as it completely negates projectile damage and grants you the ability to get in close to someone wielding a gun to either take it from them or beat them down.

Additionally, rolling over and picking up a weapon is the fastest way to equip them in the game, giving you even more reasons to constantly be rolling whenever you need to move to another part of a stage or towards a weapon you need. Obviously, there will be some situations where rolling may not be the best choice, but it mostly is and should be incorporated into your movement.

Use Parries And Finishers Wisely 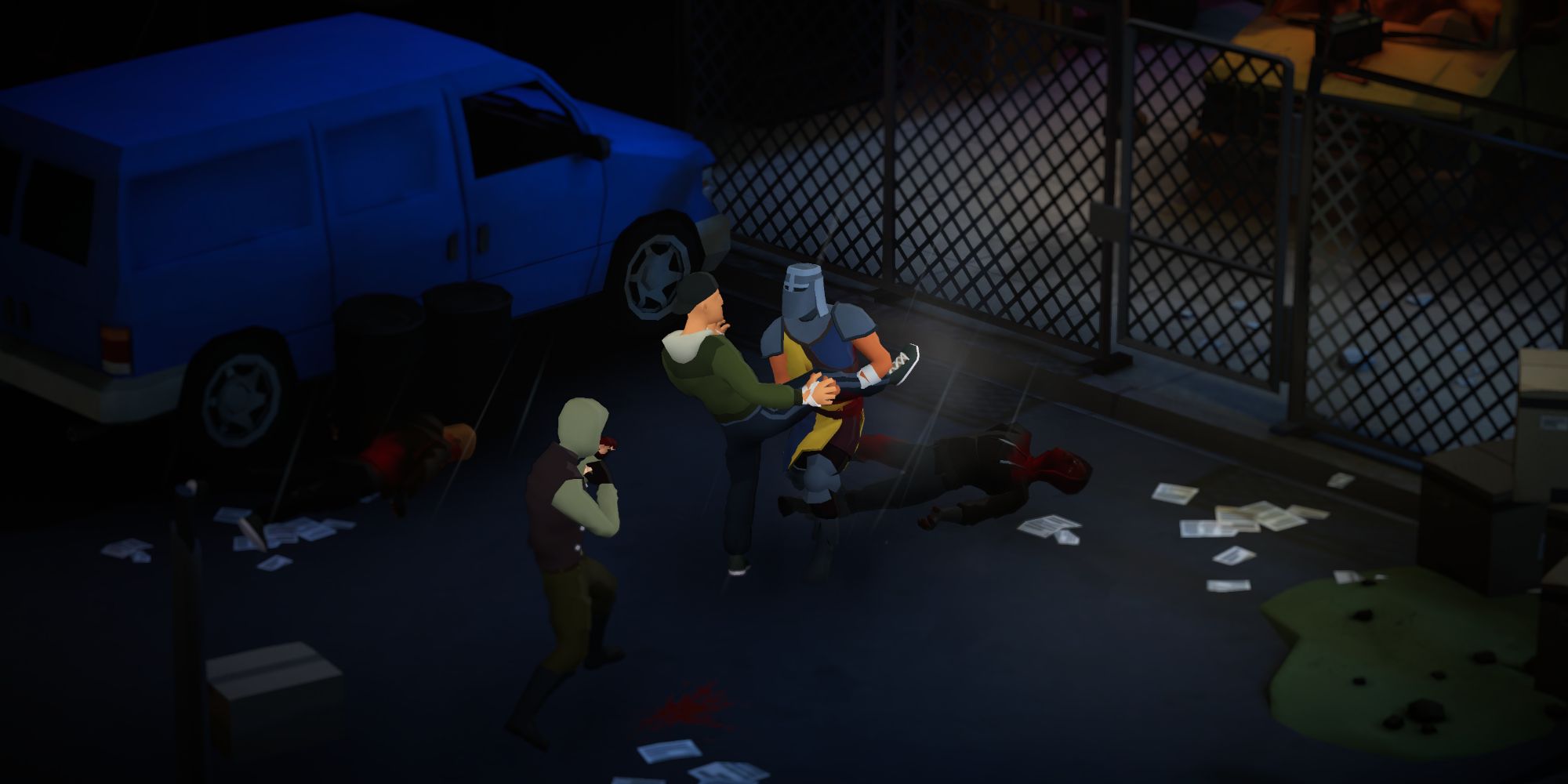 Landing a devastating counter-parry or a finisher is always a satisfying and rewarding feeling in Midnight Fight Express, as you get to see Babyface perform a gruesome takedown that ends in an overly bloody mess. However, while undeniably cool, you should know that there's a time and place to perform them as you may get interrupted by other enemies in the area, which can end rather poorly for you depending on the situation.

Whenever you see the prompt for a finisher pop above your opponent's head, you can almost always take that, as most enemies will back off and let you brutalize their friend. But, regarding counters, you may want to rethink your actions. If you see the prompt appear for a counter-parry, be sure no one else is in arm's reach of you, as they will interrupt the attack and open you up to significant damage. While you can typically get away with a counter-parry off in the game's early goings, be on high alert in the later sections, as you can get punished for using them haphazardly. 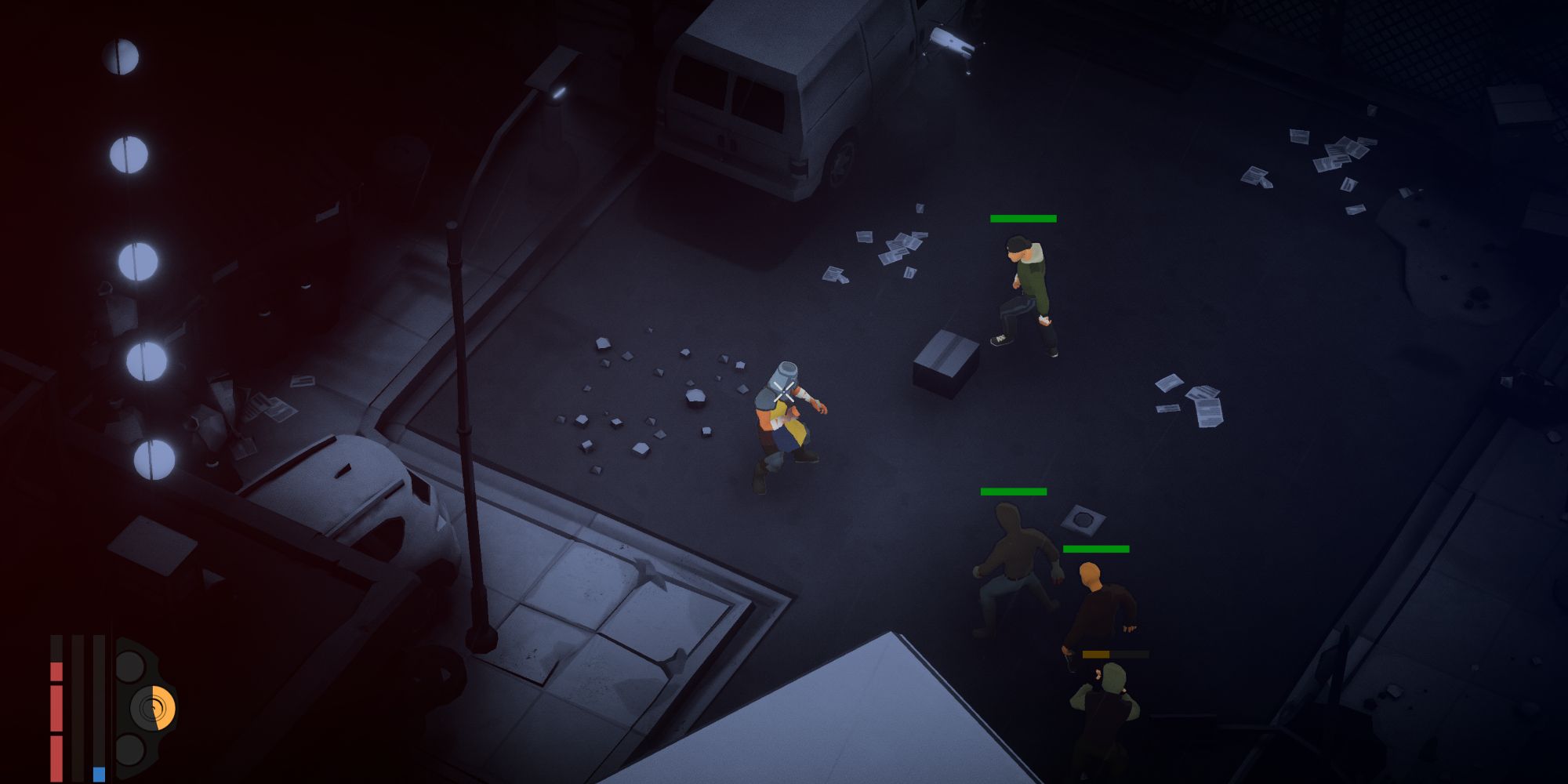 Focus is an excellent tool that allows you to check your opponent's remaining health, scan the area for objects, and even see if an item is explodable. Though it's easy to forget, you should always use Focus whenever you first enter a room to get a general grasp on its layout and which objects you can interact with to get the most out of your combos and setups.

Most importantly, there are some enemy types later in the game that can only be killed via explosive items, meaning you will either have to grab a grenade launcher or RPG from an enemy or can use the many propane tanks or gasoline canisters littered around the ground to dispose of them. Focus will help you identify interactable objects that are explosive, which can help you out tremendously in the heat of battle.

Add Variety To Your Combos 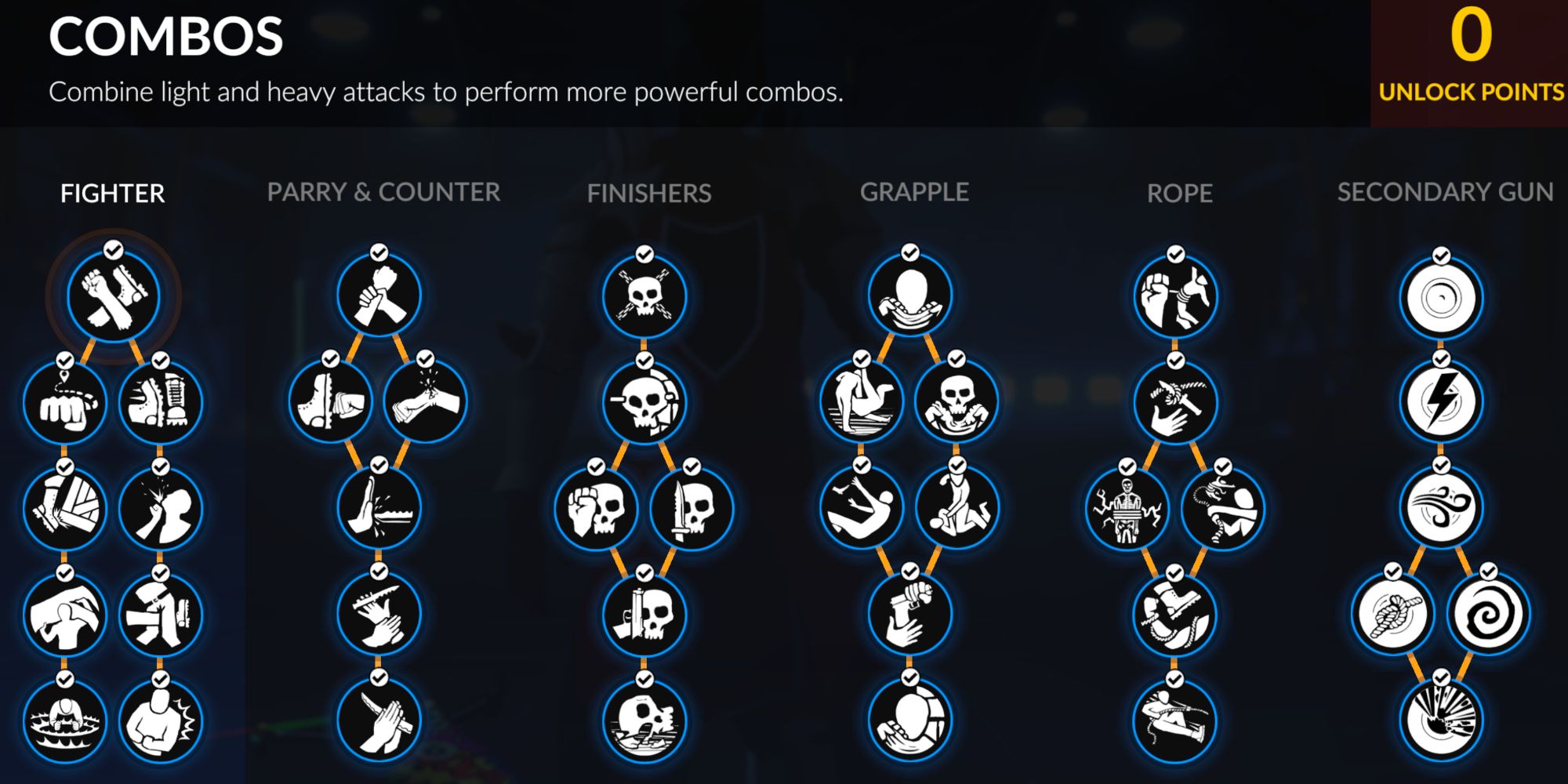 It can be easy to start mashing the same attacks repeatedly, especially if they are proving to have a high success rate, but adding variety to your combos is beneficial in the long run. It can help you drastically in the later sections or achieve S Ranks in missions. Whenever obtaining a new Skill, you should try it out in the game's Playground to get a general idea of how to utilize it in your game plan.

Things such as closing the gap with the Long Range Attack Skill from the Fighter Tree and combining it with a grapple or finisher can go a long way, especially if there are environmental hazards in the area you can interact with and use to eliminate your enemy swiftly. Furthermore, constantly using your Secondary Weapon and its many ammunition types is also an excellent way to extend your combo chain and add a bit of extra flavor to your domination.