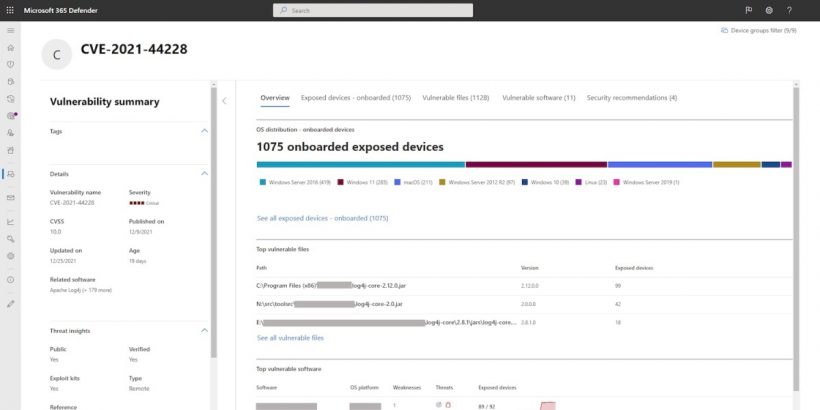 Microsoft announced it has rolled out new capabilities in its Defender for Containers and Microsoft 365 Defender offerings for identifying and remediating the widespread vulnerabilities in Apache Log4j.

On Monday night, Microsoft disclosed it has updated the Defender for Containers solution to enable the discovery of container images that are vulnerable to the flaws in Log4j, a widely used logging software component.

Defender for Containers can now discover images affected by the three vulnerabilities in Log4j that have been disclosed and now patched, starting with the initial report of a remote code execution flaw in Log4j on December 9.

The capability that enables scanning for vulnerabilities in container images running on a Kubernetes cluster is powered by technology from cyber firm Qualys, Microsoft noted.

“We will continue to follow up on any additional developments and will update our detection capabilities if any additional vulnerabilities are reported,” the team said in the post.

These capabilities are supported on Windows and Windows Server, as well as on Linux, Microsoft said. However, for Linux, the capabilities require an update to version 101.52.57 or later of the Microsoft Defender for Endpoint Linux client.

“These new capabilities integrate with the existing threat and vulnerability management experience and are gradually rolling out,” Microsoft’s threat intelligence teams said in the post.

The discovery capabilities cover installed application CPEs (Common Platform Enumerations) that are known to have vulnerabilities to the Log4j RCE, along with vulnerable Log4j Java Archive (JAR) files, the post says.

Along with providing some of the largest platforms and cloud services used by businesses, Microsoft is a major cybersecurity vendor in its own right with 650,000 security customers.

The company previously said it has observed activities by multiple cybercriminal groups seeking to establish network access by exploiting the vulnerability in Log4j. These suspected “access brokers” are expected to later sell that access to ransomware operators.

Their arrival suggests that an “increase in human-operated ransomware” may follow against both Windows and Linux systems, the company said.

Microsoft and cyber firm Mandiant have also said they’ve observed activity from nation-state groups — tied to countries including China and Iran — seeking to exploit the Log4j vulnerability. An Iranian group known as Phosphorus, which has previously deployed ransomware, has been seen “acquiring and making modifications of the Log4j exploit,” Microsoft said.

Additionally, the company previously said it has observed a new family of ransomware, known as Khonsari, used in attacks on non-Microsoft hosted Minecraft servers by exploiting the vulnerability in Apache Log4j.

Many enterprise applications and cloud services written in Java are potentially vulnerable due to the flaws in Log4j prior to version 2.17, which was released December 17. The open source logging library is believed to be used in some form — either directly or indirectly by leveraging a Java framework—by the majority of large organizations.

Version 2.17 of Log4j is the third patch for vulnerabilities in the software since the initial discovery of the RCE vulnerability.