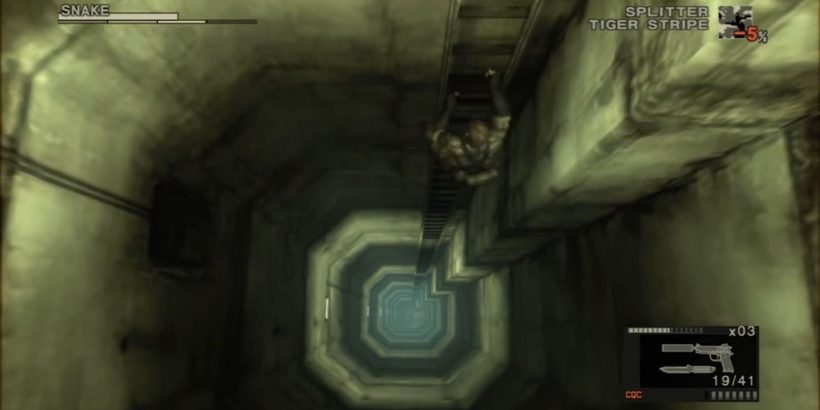 Metal Gear fans will only have to hear the word "ladder" to have them thinking back to one of Metal Gear Solid 3's most iconic moments. For those unfamiliar, Metal Gear Solid 3 is chock full of Kojima's unique brand of quirky, and one scene has Snake climbing up what seems like an impossibly tall ladder while the game's main theme plays. It's meant to be a quiet moment of reflection in a game that is incredibly tense from the start. However, it's a bit annoying for speedrunners.

As the name implies, speedrunners like to finish games as quickly as they can, and an unskippable two minute long ladder climb can grind a player's momentum to a halt. In steps Twitter user Apel (thanks TechRaptor) who has uploaded a video showing players how to skip the climb entirely by using a very peculiar glitch. The video itself has been embedded down below for you to watch if you like.

The glitch itself doesn't even look too difficult to pull off as Snake simply sidles up againt the wall next to the ladder and fiddles about in his inventory for a little bit and equips a few specific items. Snake then T-poses for some inexplicable reason and then rockets up into the air right to the top of the ladder, topping it all off with a fancy little dive onto the floor once he reaches his peak.

This will undoubtedly shake up the game's speedrunning community somewhat now that a full two minutes can be shaved off any world record attempts. In speedrunning, just a few seconds of time can be a huge help, as has been frequently displayed by Elden Ring speedrunner Distortion2 who currently holds the world record having completed the game in under seven minutes. Now this glitch is public knowledge, it might not be too long before we see the world record for Metal Gear Solid 3 broken as well.