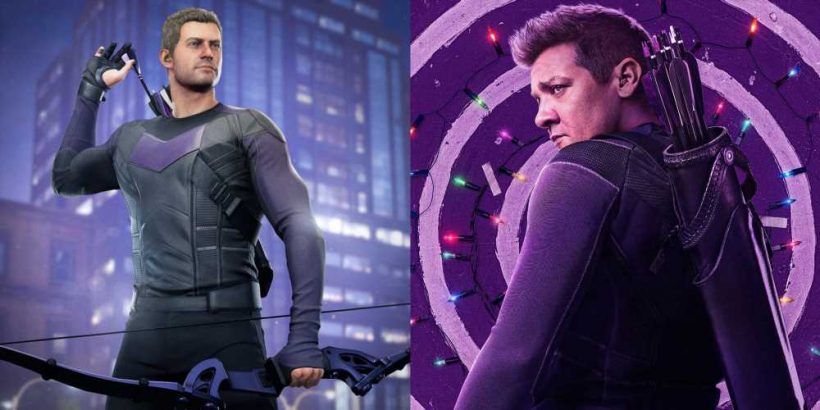 Just in time for the Hawkeye series finale, Marvel's Avengers is adding Clint Barton's new purple outfit to entice fans to stick around more with beloved characters in the game.

Hawkeye seems like yet another win for the MCU, and not only because of Hailee Steinfeld as Kate Bishop. The six-episode mini-series premiered on Disney+ in November, and the finale is already available for audiences of the streaming platform. With its perfect holiday atmosphere and eye-pleasing action, Hawkeye might just make you want to shoot some arrows with style — you're welcome to do so in Marvel's Avengers playing either as Kate Bishop or Clint Barton in his newest suit straight from the TV series.

Crystal Dynamics dropped the announcement on Twitter, revealing the new costume for the charismatic sharpshooter. As seen in the first image, Barton is getting the purple-black suit as accurately as possible recreating Jeremy Renner's original dress from the TV show.

"Things have gotten complicated. Inspired by the Marvel Cinematic Universe, the Marvel Studios' Hawkeye Outfit features Clint confronting enemies from his past," the attached message reads.

According to the team, the new cosmetic item will be available in the game's Marketplace across all platforms starting today, December 23. As in previous cases, you won't be getting the new Hawkeye skin for free. It will presumably be in line with other premium skins which are around $14 each.

Sadly, the in-game version of Kate Bishop isn't getting her own Disney+ treatment, at least, not right now. Some people expressed their disappointment on socials for the lack of thematic skins for the character, but things still may change down the road. For now, the players have to go with her older outfits.

And in case you're wondering — yes, there is an extra story campaign featuring Kate Bishop and Hawkeye in Marvel's Avengers, available for free for all owners of the game. Of course, it is nothing like the new MCU show, but at least it's giving you a chance to play as one of the popular heroes.