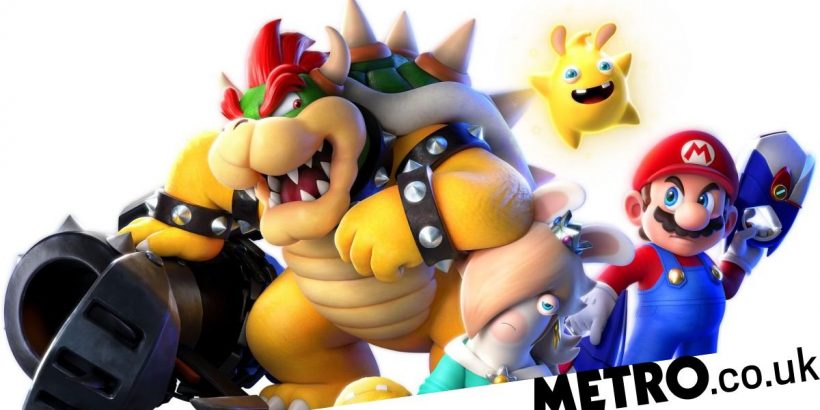 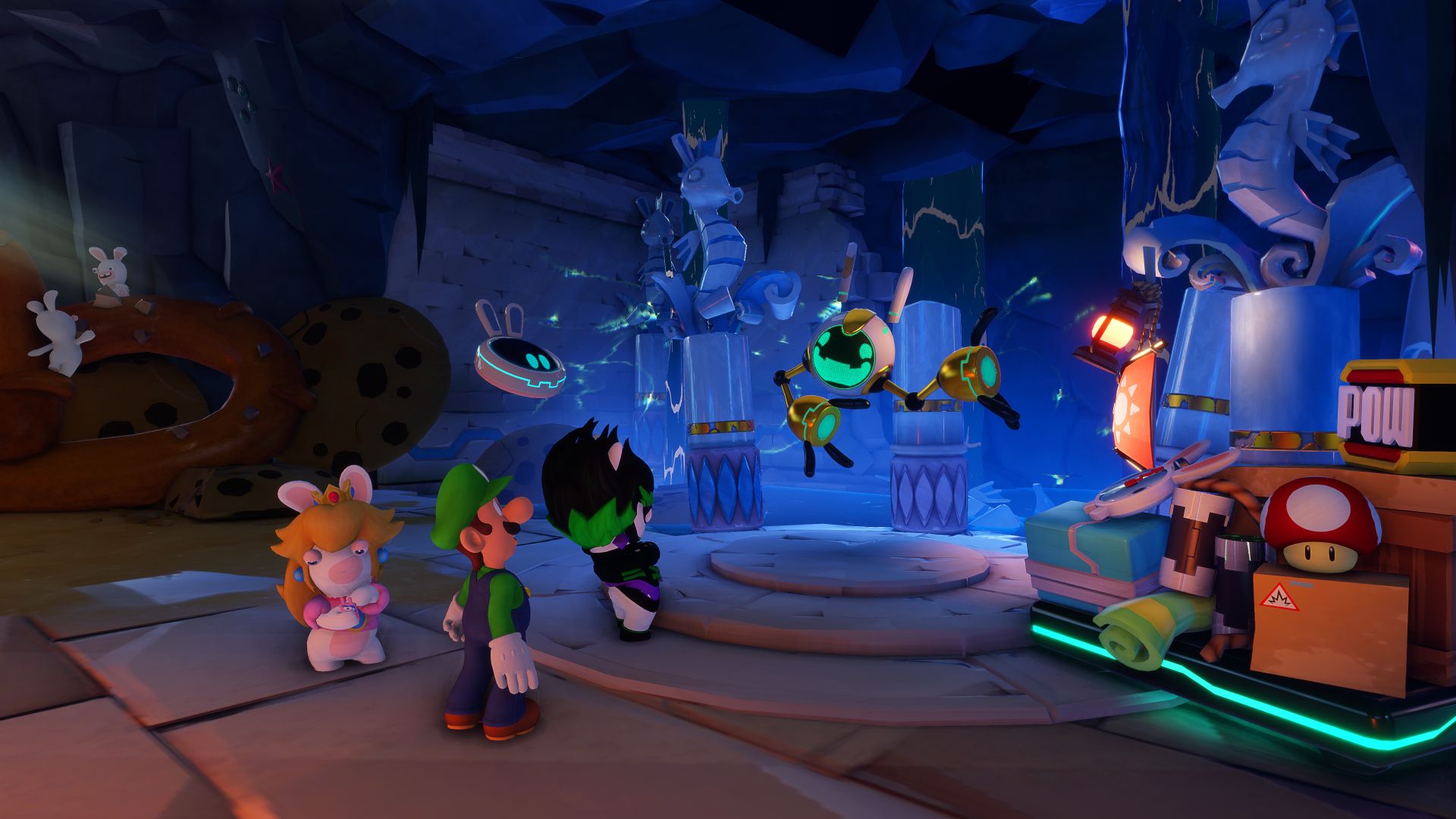 GameCentral goes hands-on with the sequel to Mario + Rabbids Kingdom Battle, which shoots for the stars with help from Super Mario Galaxy.

Back in 2017, Mario + Rabbids Kingdom Battle was a surprise in every regard. When it was leaked, showing Mario armed with blasters and partnered with Rayman’s screaming bunnies in Peach cosplay, the concept was mocked by many as too bizarre to ever possibly work. The fact a collaboration between Nintendo and Ubisoft was glued together by systems borrowed from XCOM, and that it was actually great, felt like a borderline gaming miracle.

Without the element of surprise, sequel Sparks Of Hope has to work double time, in some ways, to strike the same magic. Despite higher expectations, our main takeaway after playing for three hours is how widespread the improvements are. A renewed confidence runs through Sparks Of Hope, from the flashy, charming cinematics to the overhauled gameplay systems.

This confidence (and increased budget) is noticeable from the jump. After an opening cinematic, you’re tasked with retrieving Rabbid Mario’s overalls within the grounds of Peach’s castle, so he’ll stop hiding in a bush. It’s a silly tutorial sequence for the movement – where you now control the lead character instead of robot Beep-O – but it’s the perfect reintroduction to the offbeat charm of the Rabbid-distorted spin on the Mushroom Kingdom. It’s as if the production quality of Luigi’s Mansion 3 collided with a funnier version of the Minions.

The first chunk of gameplay we got to play spanned the opening hour, where you’re introduced to the new villain, a towering alien entity named Cursa, who is spreading dark matter called ‘Darkmess’ throughout the galaxy and hunting down Sparks: a fusion of Rabbids and Lumas. Some of the writing feels bogged by these various terms but, like the first game, the excellent slapstick animation keeps the cinematics consistently comical. To add to the production value, Beep-O is now fully voiced with snarky C-3PO energy, that fits the character surprisingly well.

Outside of the presentation, the combat has been notably improved. The grid system has been ditched and replaced with a system where you directly control characters within a set space. The switch makes Sparks Of Hope far more dynamic to play, especially coupled with some of the new battle mechanics. One example you’re introduced to early on is Bob-ombs, that you can dash attack to start their bomb countdown before throwing them into groups of enemies.

Along with these more active mechanics, the free movement allows for an easier read of your options on the battlefield. Your character’s position is only locked into place when you attack with your main weapon or run out of action points, which are split across special abilities, dashes, and other moves – so you’re free to roam around and assess different points of cover or vantage spots between these decisions.

At a base level, the gameplay actions are fundamentally the same as before, but it makes plotting your movements and executing level-spanning combos far more satisfying – especially, for example, when you’re directly stomping multiple enemies as Mario from the air via button prompts, after being launched from a team jump.

There’re also more options via the Sparks. These act as buffs, which when activated in battle can boost attacks with elemental damage (fire, electricity, splash, etc.), bolster defence, or provide other perks. Two can be equipped to a character at once and each Spark can be levelled up by feeding them starbits you earn from battles, in one of many nods to Super Mario Galaxy. Along with the character-specific skill trees which return from the previous title, there’s much more team customisation to experiment with and consider in Sparks Of Hope.

The process of unlocking new Sparks is tied to a greater level of exploration. The first open area you explore is Beacon Beach, a gloomy island built around a lighthouse riddled with Darkmess. A key criticism of Kingdom Battle was how linear the experience felt, with only minor distractions away from the main path, in the form of some light puzzle-solving. Here, while there’s puzzles to solve too, there’s also other distractions – like side quest battles to remove Darkmess puddles, red coin challenges, and optional areas to explore to unlock new Sparks.

We didn’t have time to explore as much as we’d like, but there seemed like a healthy amount of side activities to discover judging by the area map, which signposts various points of interest with icons. There’s also Rabbid non-player characters to interact with, who often either lead you to side quests or spout a comical line that adds some extra personality to the world.

We ventured into an optional area during a later section, roughly five hours in, where you’re invited to help a scientist fix his power outage problem in his igloo lab, which becomes a minor dungeon of sorts. By using a purple sound frequency attached to Beep-O, we were able to unlock pathways behind rocks marked with a specific symbol. The area inside is scattered with roaming enemies which trigger battle encounters, as you unlock shortcuts back to previous paths as you progress.

It’s short and simple, but it climaxes with a battle that offers a fresh spin on the norm. In it, you have to push forward through enemies to activate various wind machines, which blow bob-ombs down a criss-cross path towards a Darkmess tentacle positioned at the other side. It’s tough, but it’s a promising indication that these side activities aren’t repetitive copy and paste exercises.

As for the main campaign, the Winter Palace area also showed a push towards increased variety. After an opening battle, you’re presented with a puzzle which requires you to activate two beacons down separate pathways inside the palace. One pathway feels inspired by the Boo levels in Super Mario, as you try to find the right sequence of doors to get to a ledge with a switch on the other side. The other introduces stealth, as you weave between high-level patrolling enemies in a small hedge maze.

Neither are ground-breaking by any stretch, but they’re engaging respites from the core battles than anything seen in the first game. Whether Sparks Of Hope can maintain this balance throughout (the roughly 25 hours, minus all the side quests, of the main campaign), remains to be seen.

Our session concluded with a surprisingly arduous multi-phase boss battle which introduces Rabbid Rosalina into the party. If the early trailers didn’t make it clear, the character is already a standout – a blasé deadpan delight who even sounds reluctant to follow commands in battle. Her ability, Ennui, aptly fits her personality, applying a status effect which immobilises enemies until they take damage.

The battle itself, set inside a multi-tiered library around grids of bookshelves, can easily get away from you if you aren’t monitoring every nook for enemy positions – with snipers tucked away in high vantage points. The enemy AI caught us off guard at numerous points, forcing a shift in strategy and some swift retreats. If things become too bothersome, there’s a difficulty toggle which can be adjusted at the start of every battle – a welcome addition to adapt the experience to all on the fly.

Aside from some bugs, that we were assured will be ironed out before launch, Mario + Rabbids Sparks Of Hope feels like a sequel that’s grown and expanded in all the right ways. If the open world zones and side quests are all as worthwhile as the main campaign, this previously peculiar crossover has all the potential, confidence, and ambition to further ascend beyond expectations.