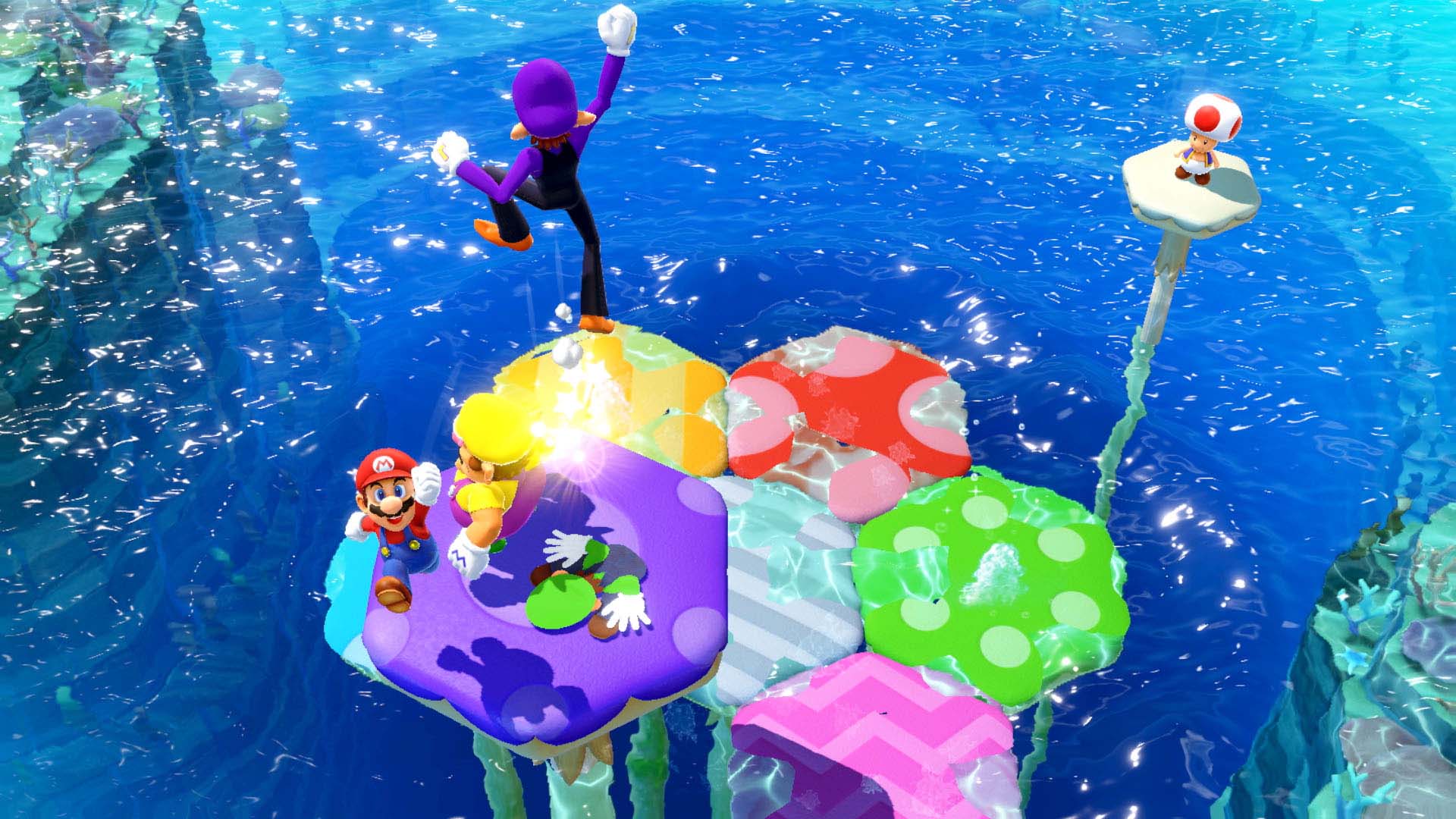 Boards and mini-games from the original three N64 Mario Party titles are remade and revamped for the Nintendo Switch.

Mario Party Superstars may be the definitive example of Nintendo realising its schedules are empty and desperately searching for something – anything – they can put together quickly from their back catalogue. They’ve almost run out of Wii U ports and since Super Mario Party was a big hit, and yet is now three years old and with no sign of a sequel, remastering some of the older entries in the series makes perfect sense. Especially as filling out the release schedules was exactly the role Mario Party used to play on the N64.

We don’t mean that in a disparaging way. We genuinely love Mario Party and find it to be by far the most successful party game in terms of getting people of all ages together and enjoying themselves. Not only do things like Just Dance require that you actually want to dance but they’re not really video games in the strictest sense; however, Mario Party’s simple mini-games are a fun introduction to gaming for those that would never usually play them.

That was clearly part of the original appeal, with a new sequel appearing every year for a long while, and always around Christmas – in an attempt to supplant the traditional game of Monopoly or Risk. It’s the only time Nintendo has ever made yearly sequels and while the franchise eventually ran out of steam, overcomplicating and/or diluting the originals’ simple premise, 2018’s Super Mario Party was a successful back-to-basics reboot.

The concept behind Mario Party is extremely simple. All the games (there have been over 10 so far, not including spin-offs) are presented as virtual board games, upon which Mario and his friends and rivals act as counters. They move around the board according to a simple dice roll, with the objective of collecting as many stars as possible before the number of rounds – which you set before you start – run out. Stars cost money to buy, which has to be earned either by landing on certain spaces on the board or competing in mini-games that are triggered automatically at the end of every round.

The colour of the space you land on decides whether the mini-games are free-for-alls, 2 vs. 2, or 3 vs. 1 with each sequel including a wide variety of games, most of which are unique. The mini-games are all very simple but there’s 100 in Superstars, including everything from simple platforming and race games to spot the difference, sliding puzzles, versions of Simon Says and Hot Potato, sports games, and number-based puzzles.

Some require arcade skills to play and others do not, but there’s very few that can’t instantly be picked up by anyone, no matter their level of gaming experience. You also get a chance to practice them before you begin, reducing the chance of starting a game – which generally only lasts 30 seconds or so – and not having any idea what’s going on.

Mario Party Superstars is both a compilation and a remake, but not of any one specific title. It includes boards from Mario Party 1, 2, and 3 but the mini-games are culled from the entire series, right up to Mario Party 10 on the Wii U. Most are from the earlier titles, but you can choose to limit them to just N64 or GameCube mini-games, or according to the style of mini-game itself.

None of the Mario Party games are remade in their entirety, just the individual boards, but they have been homogenised to a degree, particularly in terms of how they start and end. It’s mostly just a presentational thing, so that switching between boards from different games doesn’t seem too jarring, but the way each game used to calculate the winner was always different and the earlier titles used to mock whoever came last. That doesn’t happen in the newer games but the only vestige of it now is a still image at the end of a match, that shows the loser being menaced by an enemy instead of celebrating.

In more recent years, Nintendo has decided that it doesn’t want to do anything that could possibly upset any of its players (you see this in how consistently less snarky Animal Crossing residents have got over the years), which is a shame because upsetting friends and family is precisely what Mario Party is all about. Although presumably the logic now is that should all be left up to the players and not the game.

Some will no doubt complain that there aren’t more boards, but five is normal for Mario Party and a lot of effort has gone into remastering the boards in 3D and upgrading the mini-games with better visuals. The boards have a good variety of themes – from tropical islands to outer space and a spooky mansion – and levels of complexity, so they’ve not just been picked at random.

Apart from various ways to play the mini-games separately there aren’t many ancillary modes, but you do get the option for online play on any of the boards, plus the ability to save mid-game and come back later.

Online has been missing from most of the series – certainly the N64 originals – but while it’s always seemed an odd thing to push for, since the principle pleasure of the game is playing with other people in the same room, it’s still good to have the option. And at least it can be some amount of fun compared to the depressing misery of playing a board game on your own.

Super Mario Party is still the better of the two games on Switch, due to its wider range of options and the fact its mini-games were always designed with Joy-Cons in mind, but there’s very little in it. It was always surprising Nintendo didn’t release an expansion pack for Super Mario Party, with more boards, and it’s easy to see Superstars as exactly that.

Mario Party may be the least requested Nintendo remake ever but that doesn’t mean this compilation is any less worthwhile. It’s silly, shallow, and relies an awful lot on luck but then so do most traditional board games. Its real purpose has always been to entertain the broadest selection of players possible, including those that have never played a video game in their life, and in that resect Mario Party Superstars is as successful as ever.

In Short: Remakes of old N64 Mario Party boards may not sound the most desirable release of the season but in terms of easily accessible party games there are few better options.

Pros: The Mario Party concept is as entertaining as ever and the boards have a good variety of gimmicks and complexity. Lots of mini-games, plus online options and nicely updated visuals.

Cons: Could do with more boards, and the homogenised presentation is a shame for those that have fond memories of the originals.