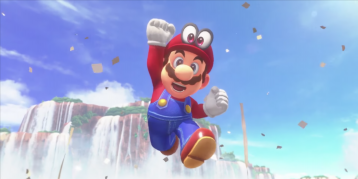 Tyron18 is now the world record holder for fastest speedrun through Super Mario Odyssey, any percentage (that means not necessarily completing any of the secondary objectives and being able to skip parts of the game through glitches if there are any present). Tyron18 takes the crown from Rushia1's previous fastest time of 57:35, with third place now falling to Lucidityy with a time of 57:56.

"Early game was absolutely cracked this run (apart from lake) but unfortunately we lost 30s in mssl which was sad," writes Tyron in the speedrun's description, adding: "56 Soon!"

You can see that the bulk of the speedrun is accomplished through extremely precise movement and uttery mastery of Mario's movement abilities. Tyron also plays on the Japanese version of the game despite being Italian, most likely due to the Japanese text appearing faster and saving speedrunners a few seconds over the course of a run.

Apparently, Super Mario Odyssey still has a number of glitches that speedrunners can perform to access moons far earlier than players should be able to. Most of these are clipping errors that allow sections of the game to be completely bypassed. This cuts a normally 12-hour campaign down to under an hour.

Super Mario Odyssey is still quite an active game for speedrunners, with placements on the leaderboard as old as week. The most recent record stood for six months before Tyron came around and shattered it, so we might need to wait another six months for someone skilled enough to come along and get this game under 57 minutes.