Teferi Akosa is one of Magic The Gathering's oldest Planeswalkers, present during the early days of Dominaria right up to the current events of the story. He is a Planeswalker aligned in primarily blue mana, with white mana largely associated with him as well.

Teferi is a significant person in the Multiverse and has been a part of multiple significant events throughout its history both before and after the Mending. In his youth, he studied at the Tolarian Academy on Dominaria, and in adulthood has become a hero of the Multiverse and a family man, saving Planes from interplanar threats. 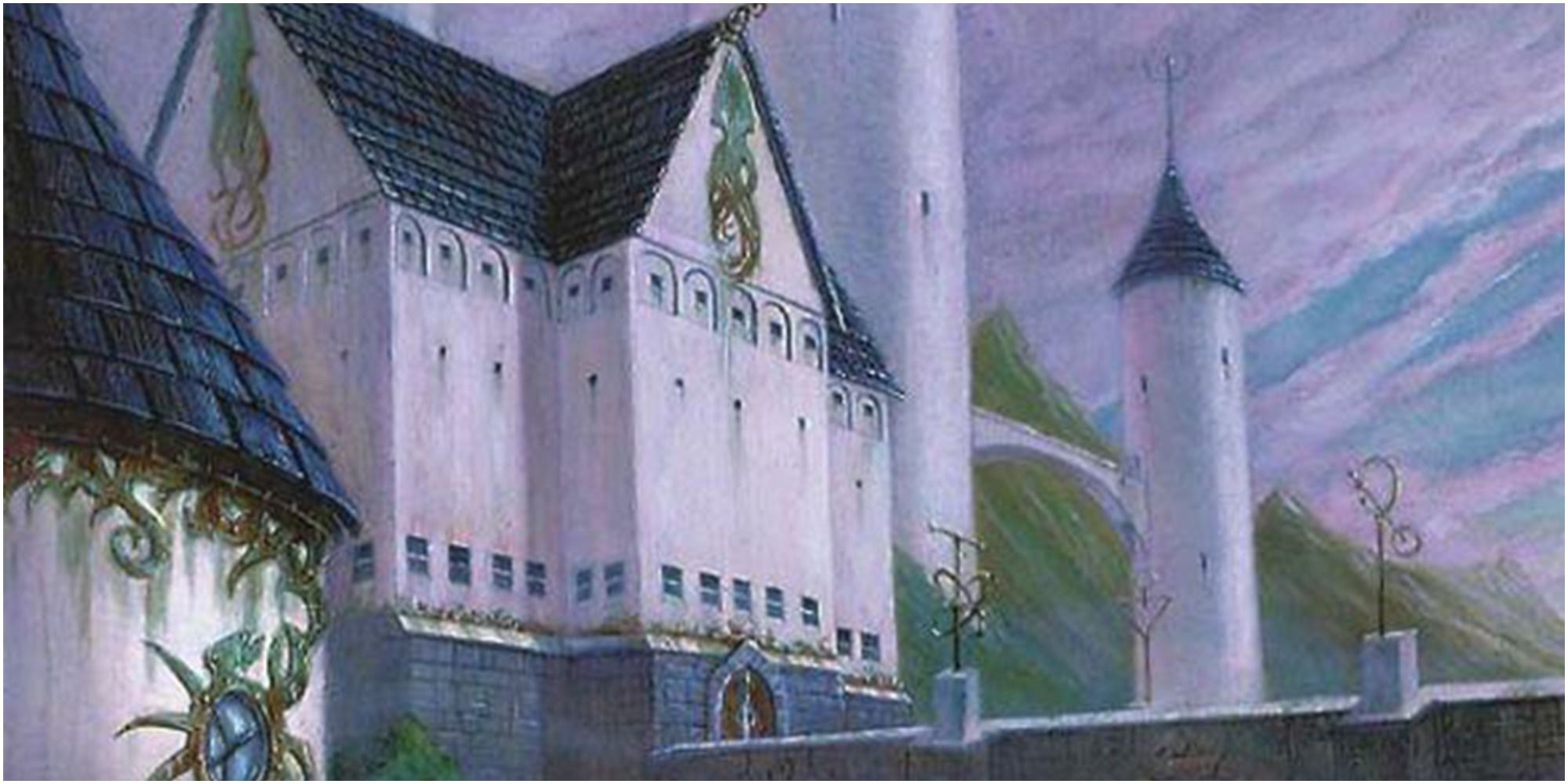 At a young age, Teferi's prowess with magic caught the attention of Urza, who recruited him to join Tolarian Acadamy, a school Urza had founded to help combat the looming Phyrexian threat in the aftermath of the Brothers' War. Teferi was both a prankster and a bully in his youth, much to the dismay of his fellow students.

The Phyrexians attacked Tolarian Academy, leading to the golem Karn being sent back in time to prevent the attack before it happened. Karn succeeded in his mission but at the cost of exploding the time machine that he used, destroying Tolarian Academy and trapping Teferi within a time bubble. A fellow student and later friend Jhoria found him, though was unsure of how to free him.

Years later, Tolarian Academy was rebuilt, and Jhoria figured out a way to bring Teferi back into the timestream. By crafting a machine and using the water of Tolaria, she was able to create a portal for Karn and Urza to travel into the time bubble and pull the mage back out. Teferi matured as the years passed, eventually leaving the academy with Jhoria to helm the Mana Rig that allowed powerstones to be created for Urza's use.

When he left the Mana Rig he returned to his home of Zhalfir on Dominaria, though helped in a few battles against the Phyrexians. On Zhalfir, Teferi experimented with more time magic as well as phasing. During this, the mage suddenly felt something awaken inside of him; his Planeswalker spark. 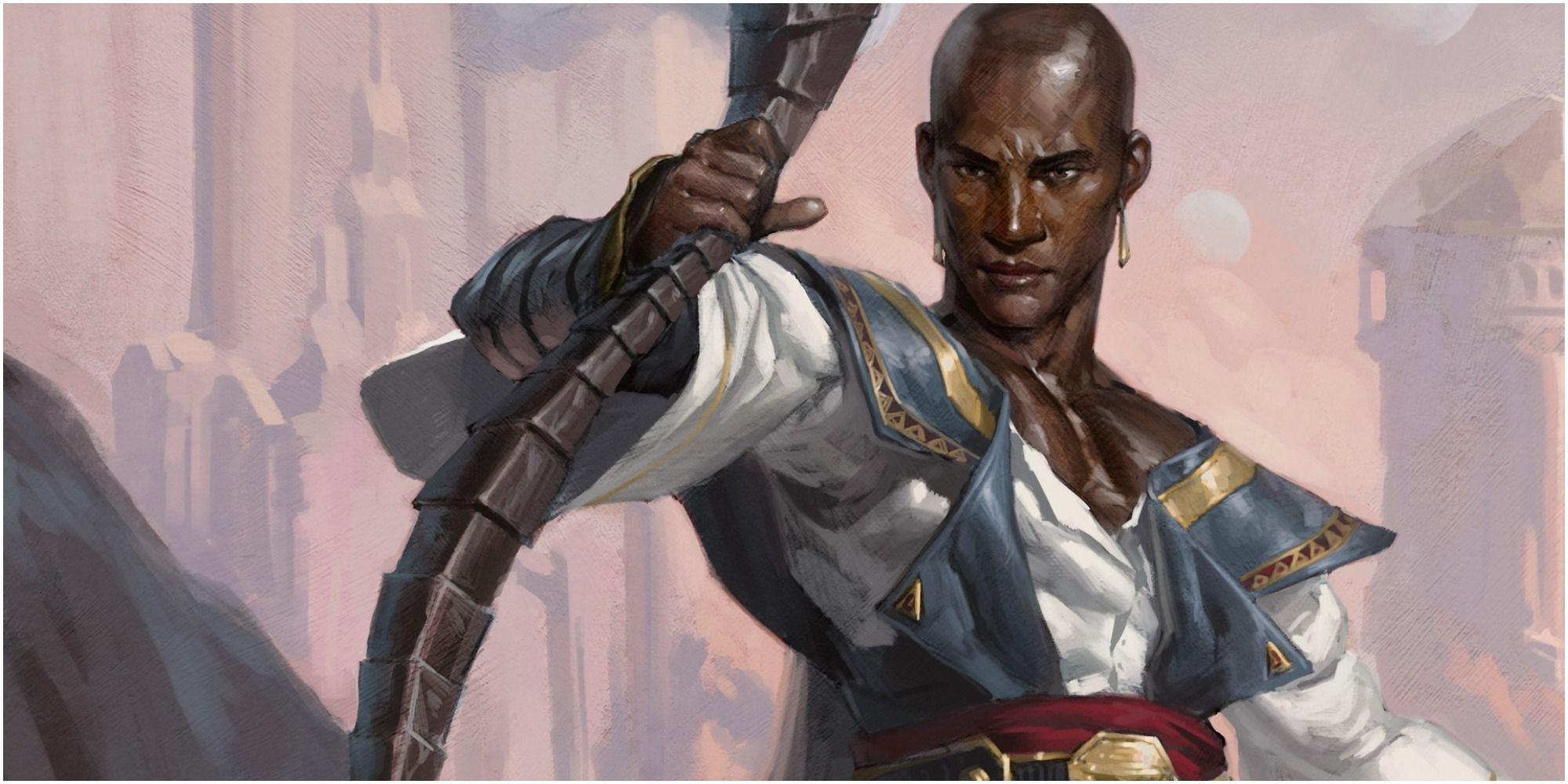 Teferi's new spark gave him an urge to explore the Multiverse, so he set up guilds on Zhalfir to lead while he traveled. However, when he returned Zhalfir was in a major conflict. Many of the guilds he set up to lead were at ends with each other, not agreeing with how Teferi set them up. In an effort to help cease the fighting, he traveled to experiment more with temporal magic and perfect it to help summon creatures.

The experiments were dangerous, causing the time around Zhalfir to become unstable. To undo the damage he had done, Teferi unleashed a burst of mana, which caused the entire island he was on to phase out of existence. This initiated one of the longest and bloodiest wars in the Jamuraa region, and later became known as The Mirage War.

Eventually, Teferi and the island returned to the land, causing a massive energy surge to travel across the region. The Mirage War raged, but the mage found himself unable to interfere to put a stop to it as he had to focus on fixing the broken timelines he had caused. The Mirage War ended, and a guilt-driven Teferi became a recluse in the aftermath of it.

The Phyrexian invasion made its way to Teferi, who reluctantly assisted in the conflict. When he didn't want to include himself in the war any longer, he convinced Urza to jump through portals with him to overload them to release energy. Teferi used the energy to phase out parts of the regions of Dominaria Jamuraa and Shiv to protect himself and the people there. Urza tried to stop him for fear of taking out powerful allies from the war but failed, and Teferi succeeded, leaving along with Jhoria who was in the Shiv region phased out until long after the Phyrexian invasion ended.

Life Without A Spark 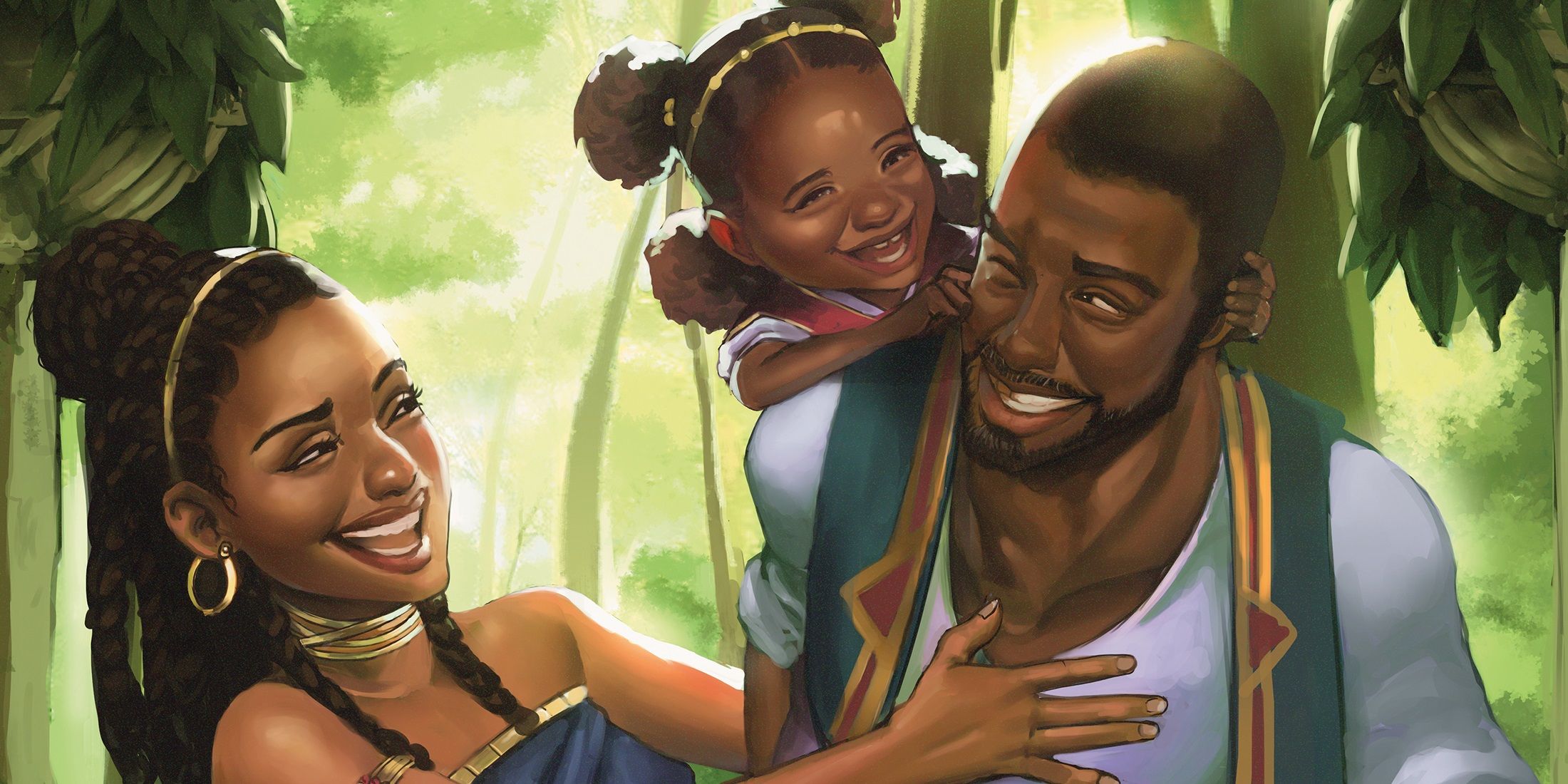 Teferi eventually came back with Jhoria 300 years later to bring Zhalfir and Shiv back to Dominaria from the time rift. Distortions of time had appeared all over the Plane, and he worked with Radha, a half-elf of the Keldon region, and Venser, an artificer of the Urborg region to close them. It was here that he had his first encounter with the dragon Planeswalker Nicol Bolas, who defeated him in battle.

While Teferi managed to close the rift over Shiv and returned it to Dominaria and its original place in time, this act would strip him of his Planeswalker spark. However, Zhalfir was even less lucky, and another Planeswalker called Jeska sealed the time rift without consulting him, leaving Zhalfir phased out permanently.

After these events, Teferi began living a simple life. He met a traveling caravanner by the name of Subira, whom he fell in love with. He traveled with her for years before settling down and having a daughter they named Niambi. Subira eventually returned to the road, unable to keep herself from traveling but visited often until she passed away of old age. 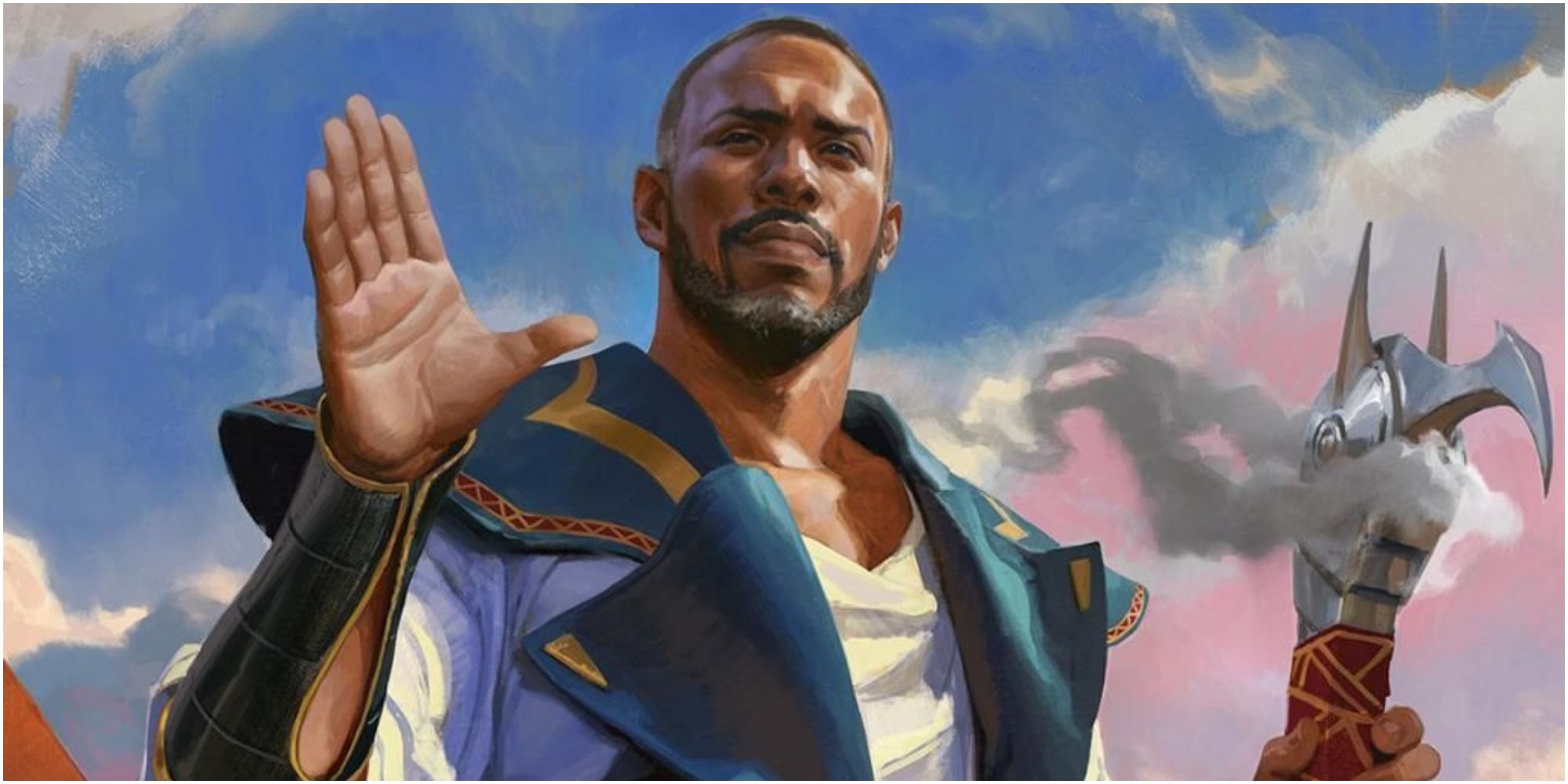 Many years later, Teferi discovers an ancient artifact of Urza's that could help fix the Zhalfir rift. He, along with the Weatherlight Crew and the Gatewatch (a group of Planeswalkers who vow to protect the Multiverse) retrieve one of these artifacts; a crystal orb in the Tivan Desert. Afterward, Teferi joins in the fight against the demon Belzenlok.

Upon Belzenlok's defeat, Jhoria gives Teferi an amulet on her neck, of which contains his old Planeswalker spark. She gave it to him, who ascends into a Planeswalker once more. He joins the Gatewatch, pledging "For the lost and forgotten, I will keep watch." 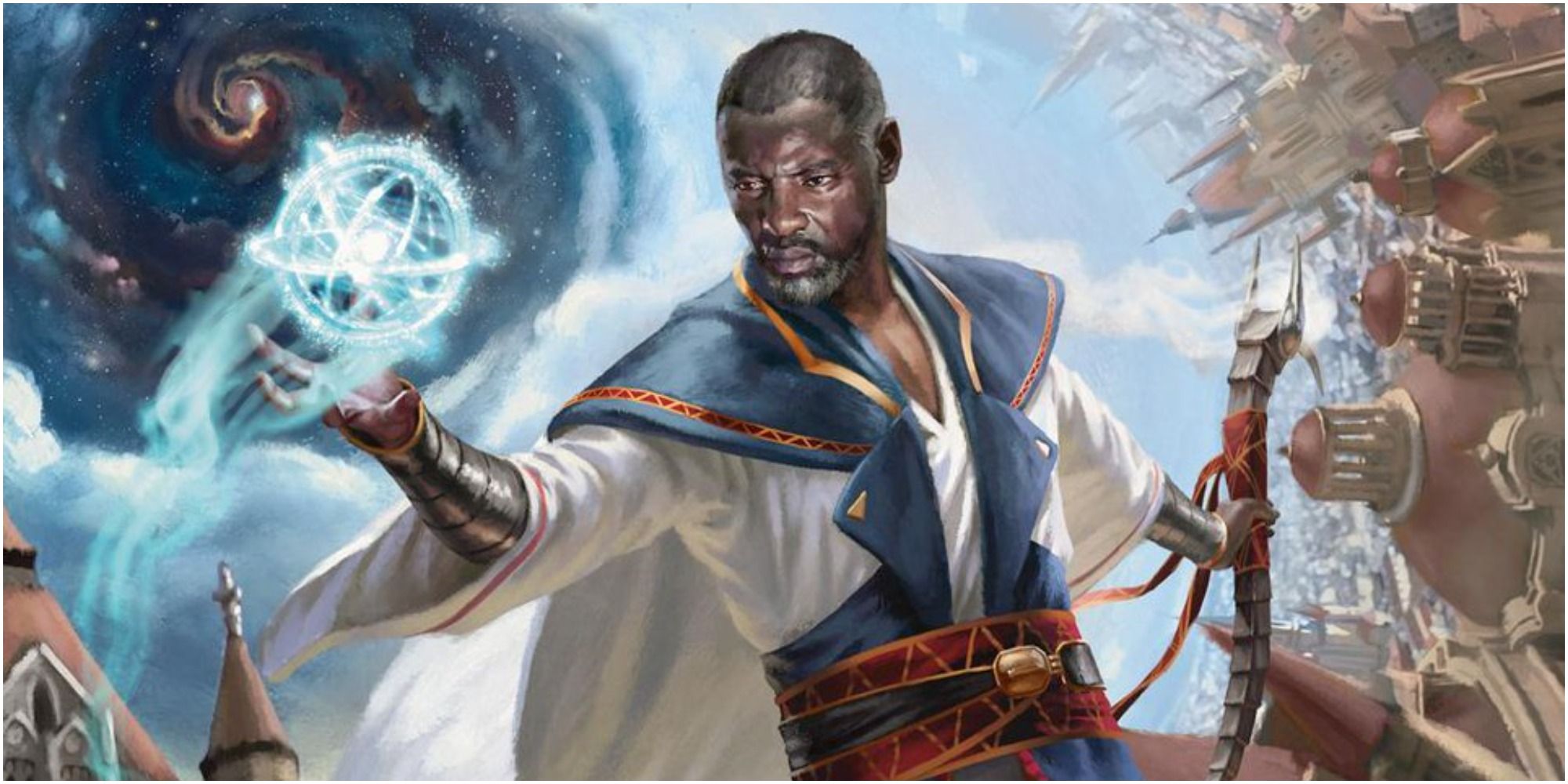 After joining the Gatewatch, Teferi travels to Ravnica to help take down Nicol Bolas during the War Of The Spark. The mage uses his time dilation to slow time at the Planar Bridge (an artifact capable of interplanar travel for non-Planeswalkers), making it slower for Bolas' soldiers to enter Ravnica. He also uses time magic to help Ravnicas and Planeswalkers against the soldiers of Bolas, saving more lives than anyone else on that day. When the Planeswalkers split up for different tasks, Teferi was in the group sent to kill the Planeswalker Liliana Vess, who was forcefully working under Bolas. They fail in their assassination after Nicol Bolas destroys the building they were fighting her on, but he keeps everyone alive by slowing down their fall. Teferi survives and along with many Planeswalkers, attends the celebration that followed the defeat of Bolas and the funeral for the Planeswalker Gideon Jura.

Teferi travels to the Plane Innistrad, where he meets the dryad Planeswalker Wrenn. He helps her find a new host, and in return, Wrenn promises to help him bring Zhalfir back from the time right in the future after Wrenn shows her new host the Multiverse.

The werewolf Planeswalker Arlinn Kord asks the Gatewatch for assistance in stopping the plan to leave Innistrad in the eternal night by finding an artifact called the Moonsilver Key. Teferi and fellow Planeswalkers Kaya and Chandra agree to help, and they travel in search of the key, finding it in Markov Manor, home of the Planeswalker Sorin Markov. They succeed in finding the key and bringing it to a ritual to stop the eternal night but are attacked by the werewolves led by Tovolar, a werewolf himself but manage to hold them off and force them to retreat. However, before the ritual is completed they are attacked by the vampire Olivia Voldaren, who succeeds and steals the key, trapping Innistrad in eternal night. 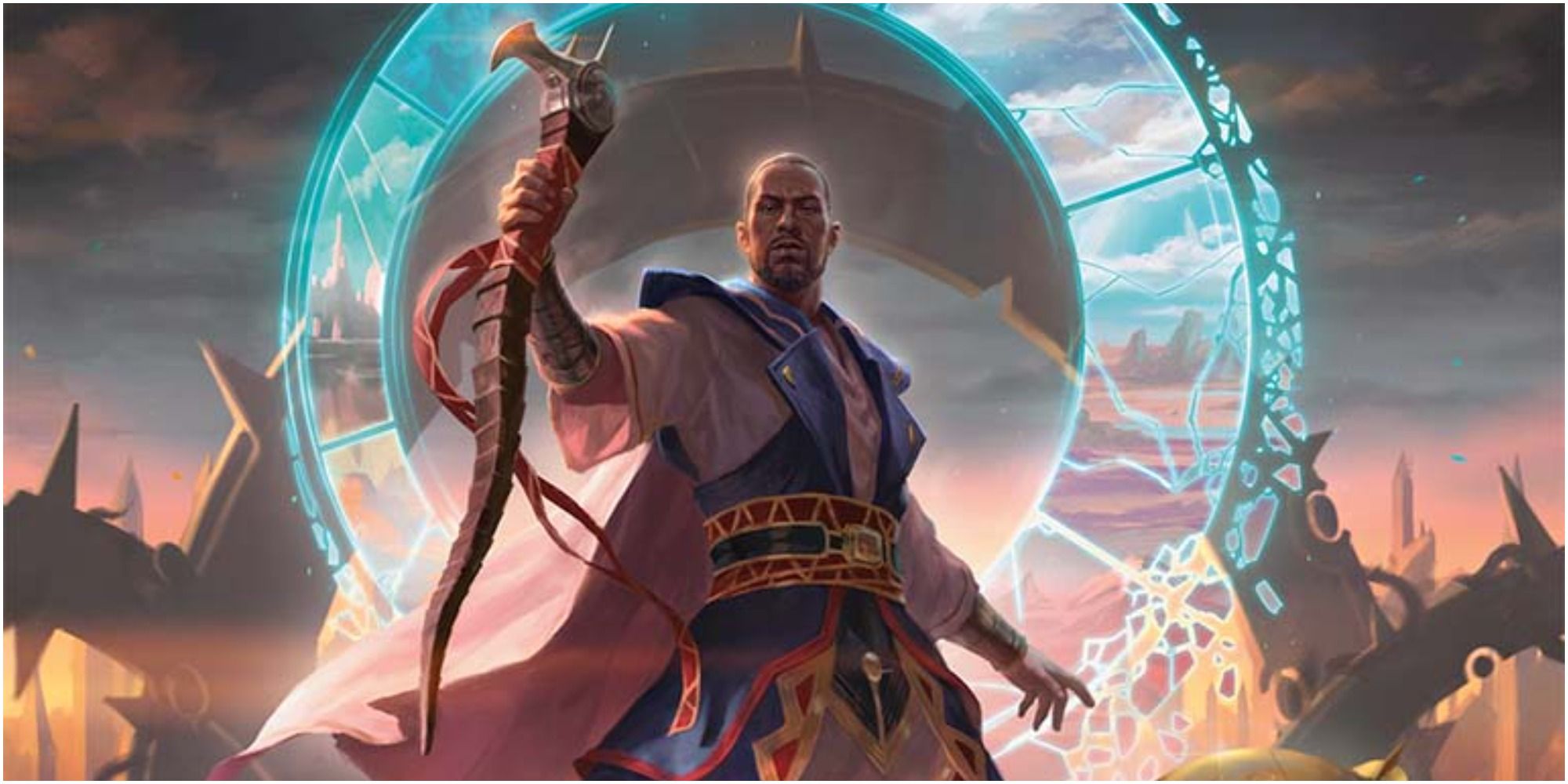 Though they failed, they are not deterred. Sorin joins the group to help due to shared interests as Olivia kidnaps his grandfather, Edgar Markov, to marry him. They all arrive at the wedding, but only Sorin was allowed to enter and he attacks Olivia once inside, allowing for enough commotion for the rest to enter and attack. Teferi uses his magic to hasten the assault and the group is successful in taking back the Moonsilver Key and completing the ritual, returning the normal day and night cycle to Innistrad. He keeps the Moonsilver Key temporarily to study it and planewalks away, but not before warning Arlinn to be on guard from the Phyrexian threat.

Teferi returns to Dominaria and attends a peace summit where he talks about the discovery and appearances of Phyerxian Praetors on other Planes. However, during the peace summit, Phyrexian sleeper agents are activated and attack, forcing them to flee into a tower. Inside the tower, he is severely injured but saved when his allies bring him to Rafwyn Capashen, a healer on the Weatherlight crew. He helps to recruit allies from the Shiv region of Dominaria to assist in the battle against the Phyrexians and fought in the Battle Of The Mana Rig. Though they held back the Phyrexians, it was not without loss, as fellow Planeswalker Ajani was turned into a Phyrexian, killing the Planeswalker Jaya and crushing the Sylex (an artifact originally used by Urza believed to be the key weapon to destroying the Phyrexians for good) and kidnapped Karn, taking him back to New Phyrexia.

He travels to Urza's Tower along with the Planeswalker Saheeli, who re-created the Sylex but was unsure of how to activate it. To discover how it functioned, Teferi does what he vowed to never do, cross time itself and travel back to the time of the Brothers' War to see how Urza activated the device.