This week the team behind Magic: The Gathering unveiled a plan for an ambitious new animated series. Heading up the project are Joe and Anthony Russo, fresh from their work on Avengers: Endgame. In fact, Wizards of the Coast’s Netflix series features a long list of heavyweights, including Henry Gilroy (Star Wars Rebels, Star Wars: The Clone Wars) and Jose Molina (The Tick, Jordan Peele’s Weird City), Yoriaki Mochizuki (Spider-Man: Into the Spider-Verse), and Bardel Entertainment (Rick and Morty, Teen Titans Go!, and Netflix’s The Dragon Prince) to name just a few.

This all comes as quite a shock; when I spoke with Jeremy Jarvis, franchise team director for Magic: The Gathering, one year ago, he frankly didn’t have much to say about the collectible card game’s future as a media property.

“I gave you the most vacuous, detail-less interview imaginable,” Jarvis said, by telephone earlier this week, “because we had grand ambitions, all I could say at the time was, ‘Listen, we’re going to do things. I need you to super trust me right now as we talk on the phone. I can’t talk about any of them, but oh you need to trust me.’” 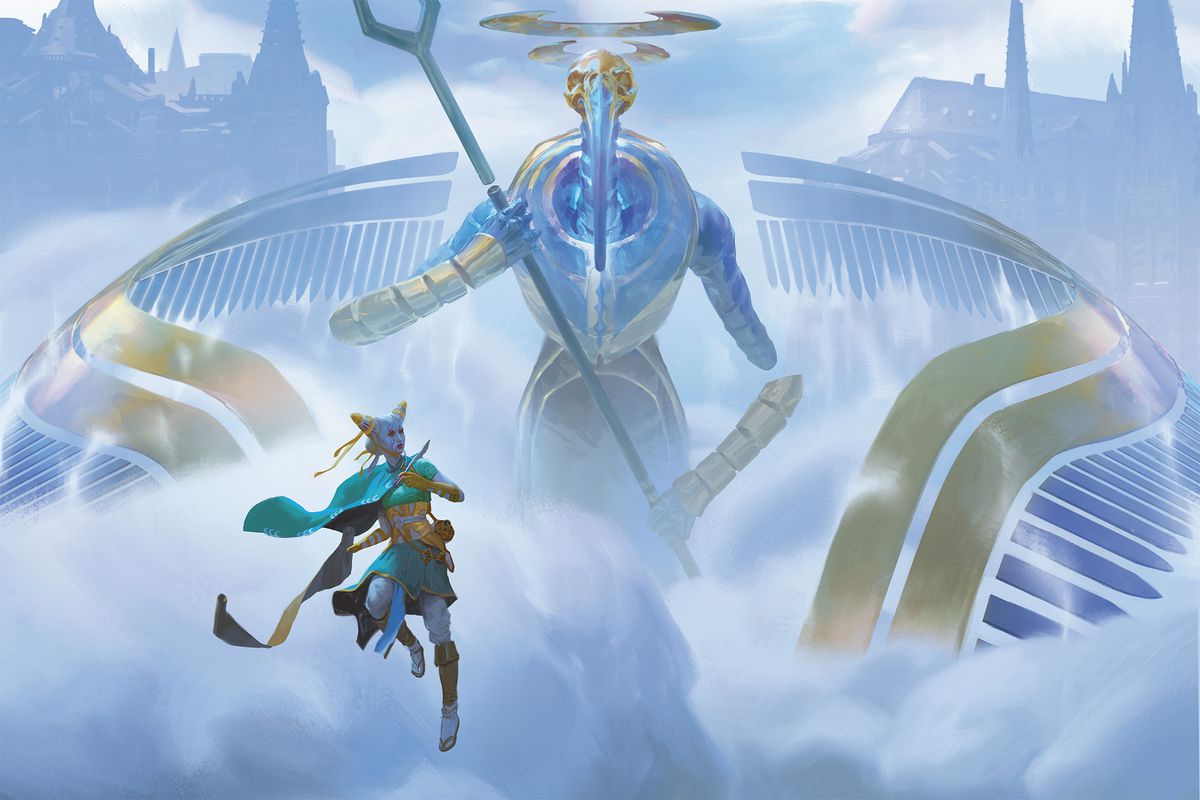 Card art for Tamiyo’s Epiphany, part of the recent War of the Spark set in Magic: The Gathering’s tabletop iteration.
Lake Hurwitz/Wizards of the Coast

As it turns out, pitching an animated series based on a tabletop game with a 26-year history is no small feat. While Jarvis couldn’t go into specifics, he said he’s made the pitch many, many times. But during each presentation, he was looking for three key things from potential partners.

“One, I want to feel that they respect the IP,” Jarvis said. “Two, I want to feel like I, as a creative, am being heard, that at least the better of my ideas are getting through, and they’re not just being pooh-poohed.

“‘Oh, I can tell you worked on the card game for 10 years,’” he mocks, mimicking the push back he’s received in similar meeting. “I want to know that [the people on the other side of the table] aren’t capable of losing the people who had been involved for a long time. And, three, I want to feel challenged, because if I don’t leave that room feeling challenged, why are there other people in the room?”

So, while the list of collaborators is long, Jarvis was quick to point out that the team at Wizards of the Coast isn’t being sidelined during the development of the show.

“This is not a ‘kick it over the fence’ licensing deal,” Jarvis said. “We have skin in this game, and the people that have been working to make the characters, make the worlds and bring them to life with the existing mediums that people know, are involved and are co-drivers of bringing it to life in this new expression.”

Card art for The Flame of Keld, from the Dominaria set of Magic: The Gathering’s tabletop iteration.
Lake Hurwitz/Wizards of the Coast

So what will the storyline be about? Jarvis wouldn’t say. But he did talk about how the franchise was positioned in those early meetings.

“One of the most important things we did is whenever we would meet with a new person we would lead with, ‘Here’s who we are today,’” Jarvis said, referring to the most recent sets of Magic cards and the elaborate storyline they’ve been building for over a decade.

“[Magic] is very character centric,” Jarvis said, “and we talked about some of the places that we believe would be best brought to life by animation, about the characters we believe that would be best served by animation. Because there is the potential that when someone says, ‘Yeah, I’m an enormous Magic fan,’ that they’re kind of frozen in 1998 or 1993 or whenever they entered the game, which is not where we are now and certainly not where we’re moving towards.”

The Magic franchise, up until very recently, has been an absolute monster at making new worlds. For a time, the team was grinding out two entire worlds every year. That, combined with the painterly quality of the card art itself, gave more than a few potential collaborators pause.

“We’re not asking [this cartoon] to bring card art to life,” Jarvis said. “That’s another thing we’ve had to clarify over and over again on the front end, because as soon as we start showing these paintings people get bug eyed and jittery.”

But they are asking artists to set their world in motion. Fans, who have mostly known its worlds only through two-dimensional art, will see their favorite Planeswalkers casting their signature spells for the first time. That presents a challenge for Jarvis, who is working hard with his team to keep things consistent between the animated series, the new digital CCG Magic: The Gathering — Arena and other expressions of the art currently in the pipeline.

“This is not just for Netflix,” Jarvis said. “My franchise IP development team and I, we are doing explorations into motion, into bringing things to life in ways that TCG doesn’t have access to, of visualizing powers of what does it actually look like when the character does the thing? What does planeswalking look like? Right? We’re doing that exploration at a franchise level.”

He said that a talented artist named Lake Hurwitz has been tapped for that internal project.

“We’re able to give [Hurwitz’s work] to each game partner, in each channel, and certainly to Netflix, so that there is a throughline as things are brought to life in new mediums,” Jarvis said.

While he said it was hard to put his finger on the final look of the show, he said that fans of animated series like The Dragon Prince are likely in for a treat.

“We are moving into that character-driven franchise space,” Jarvis stressed. “This is not going to be Yu-Gi-Oh! or Pokémon where you’re literalizing gameplay aspects. We developed this library of wonderful characters and wonderful places and impactful events, and we’re going to be bringing that to life in a new way.”