Magic: The Gathering's Unfinity bucks years of Un-set tradition by allowing certain cards to be played in Eternal formats like Vintage, Legacy, Commander, and Pauper. All regular cards printed in Unfinity feature a black border, typically Un-sets cards have silver borders to designate that they are not tournament legal. Not every card printed in Unfinity can be played in these formats, however.

You can tell which cards are legal in Eternal formats by the silver holofoil stamp at the bottom of the card. Cards that are legal will feature the familiar oval stamp, nonlegal cards will have an acorn-shaped stamp and are called acorn cards. 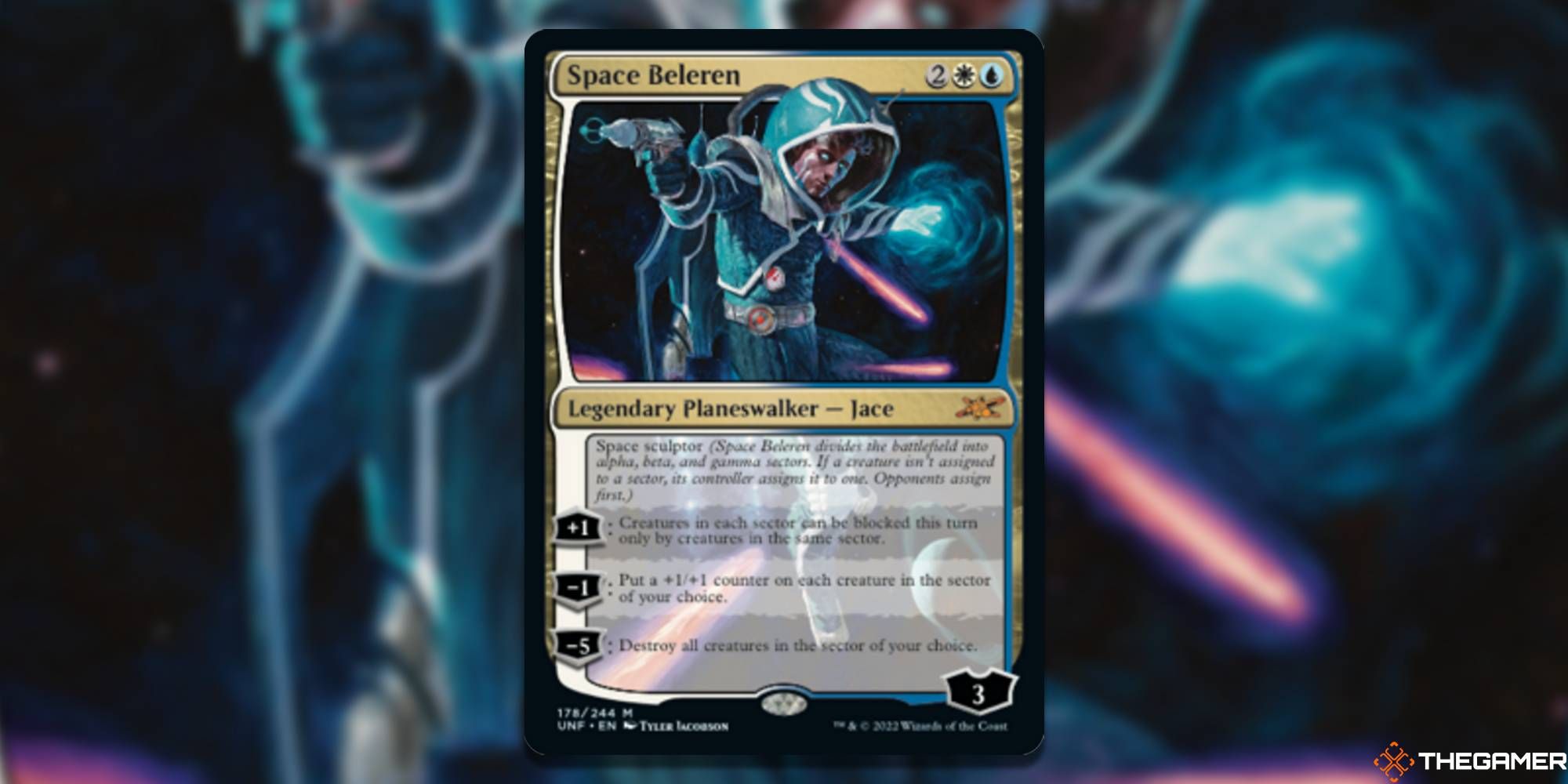 Space Beleren probably won't see play in Legacy, but it would be amazing and that’s why he’s on this list. The wildly convoluted alpha, beta, and gamma sectoring that Space Beleren does when he enters the battlefield can section off creatures, requiring them to be blocked only by creatures in the same sector.

However, Space Beleren cannot protect itself and provides little advantage on the battlefield other than forcing weird combat scenarios. 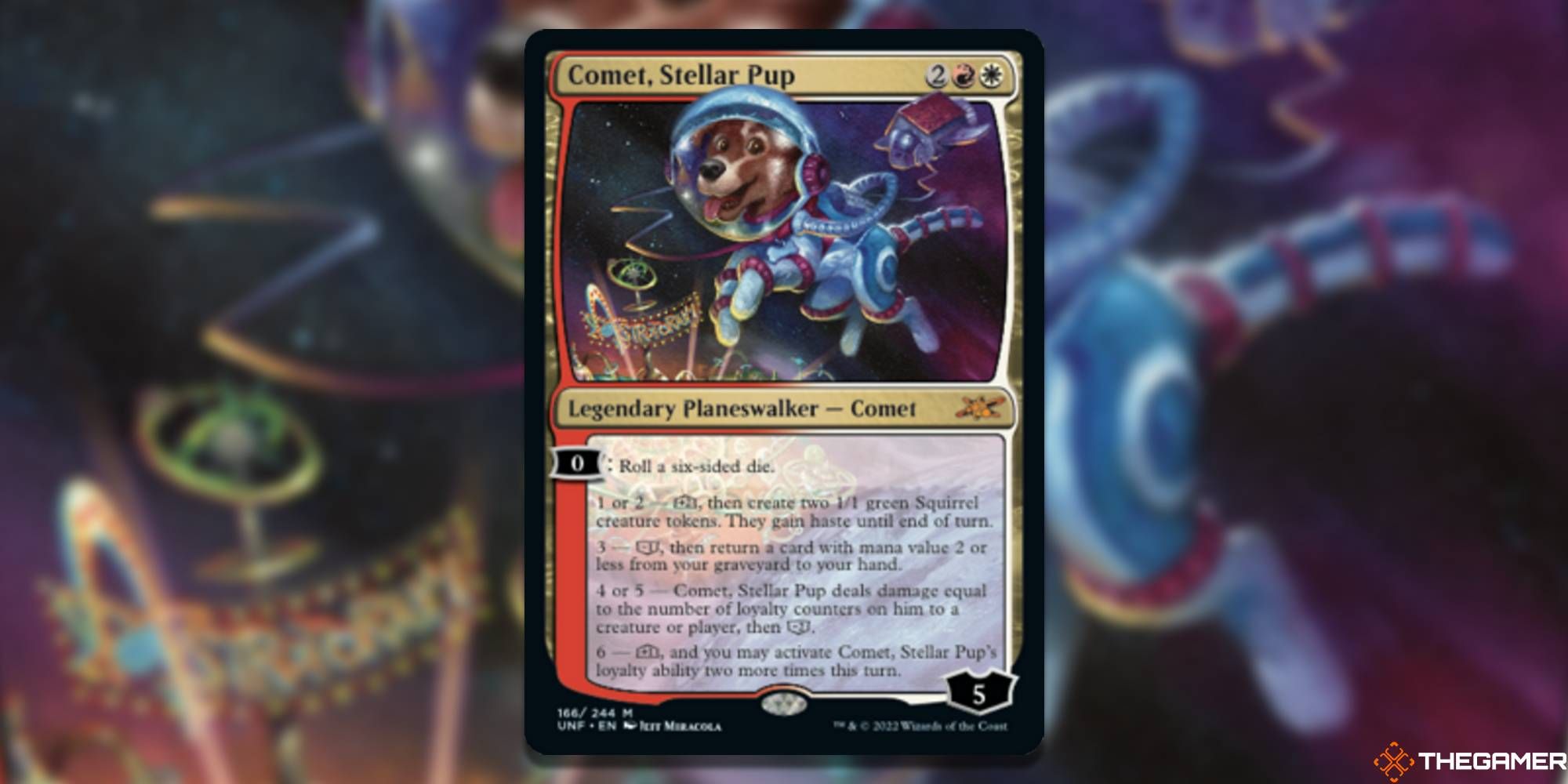 This little space puppers has some potential in Legacy as a planeswalker, depending on how lucky you are. When you activate Comet, Stellar Pup’s ability, you roll a six-sided die and enact one of three abilities, depending on the result.

You could create two tokens, return something that costs two mana or less from your graveyard to your hand, damage a creature or player, or on a six, activate Comet’s ability two more times this turn. Each option available on Comet is pretty good and can help get just enough of an advantage over your opponent. 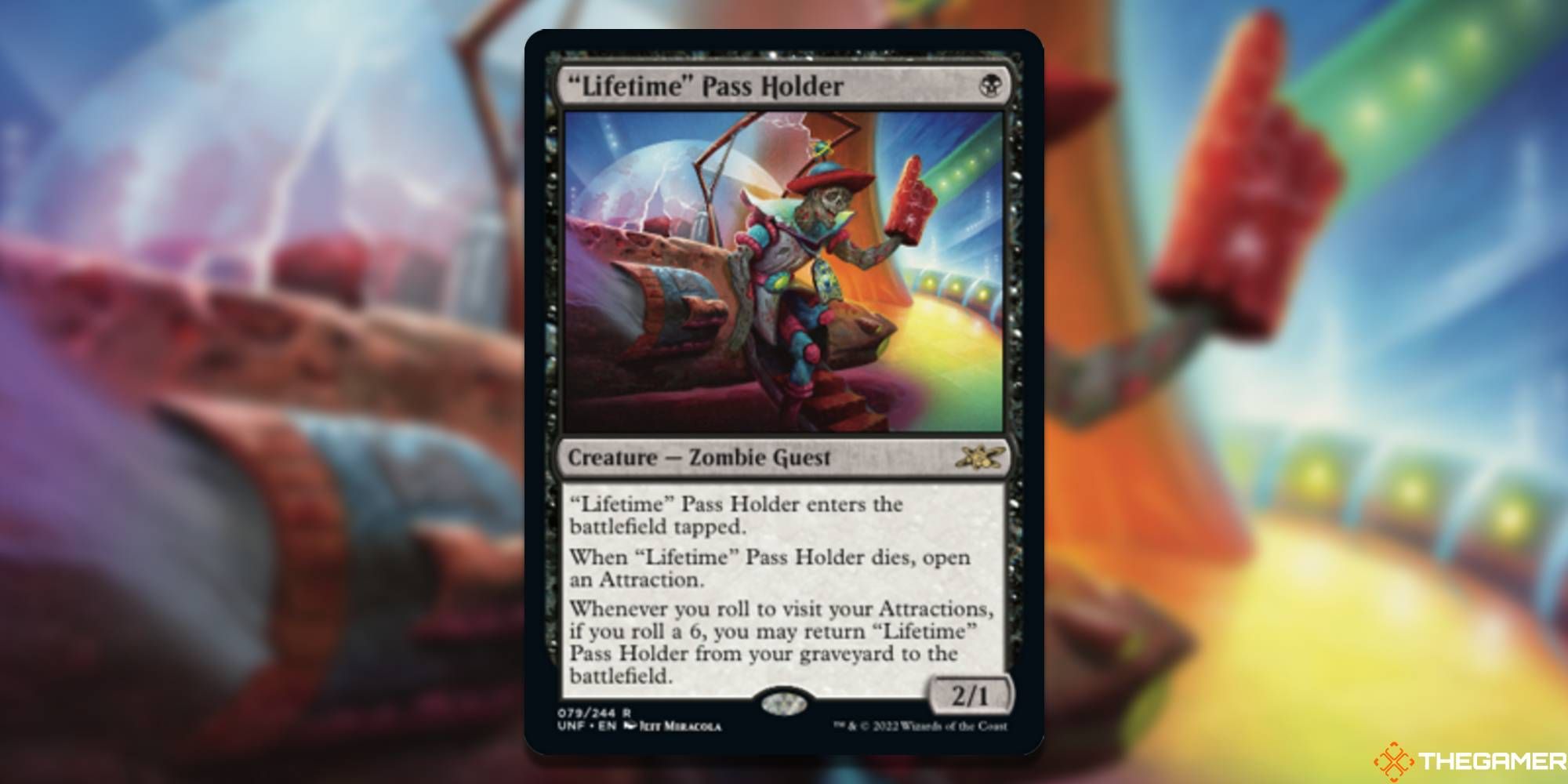 Attractions are a new artifact type introduced in Unfinity that requires players to bring with them a separate deck of ten unique attractions. At the beginning of your first main phase, you roll a six-sided die, and if the results match any of your Attractions on the battlefield, that ability triggers.

7/10 The Most Dangerous Gamer 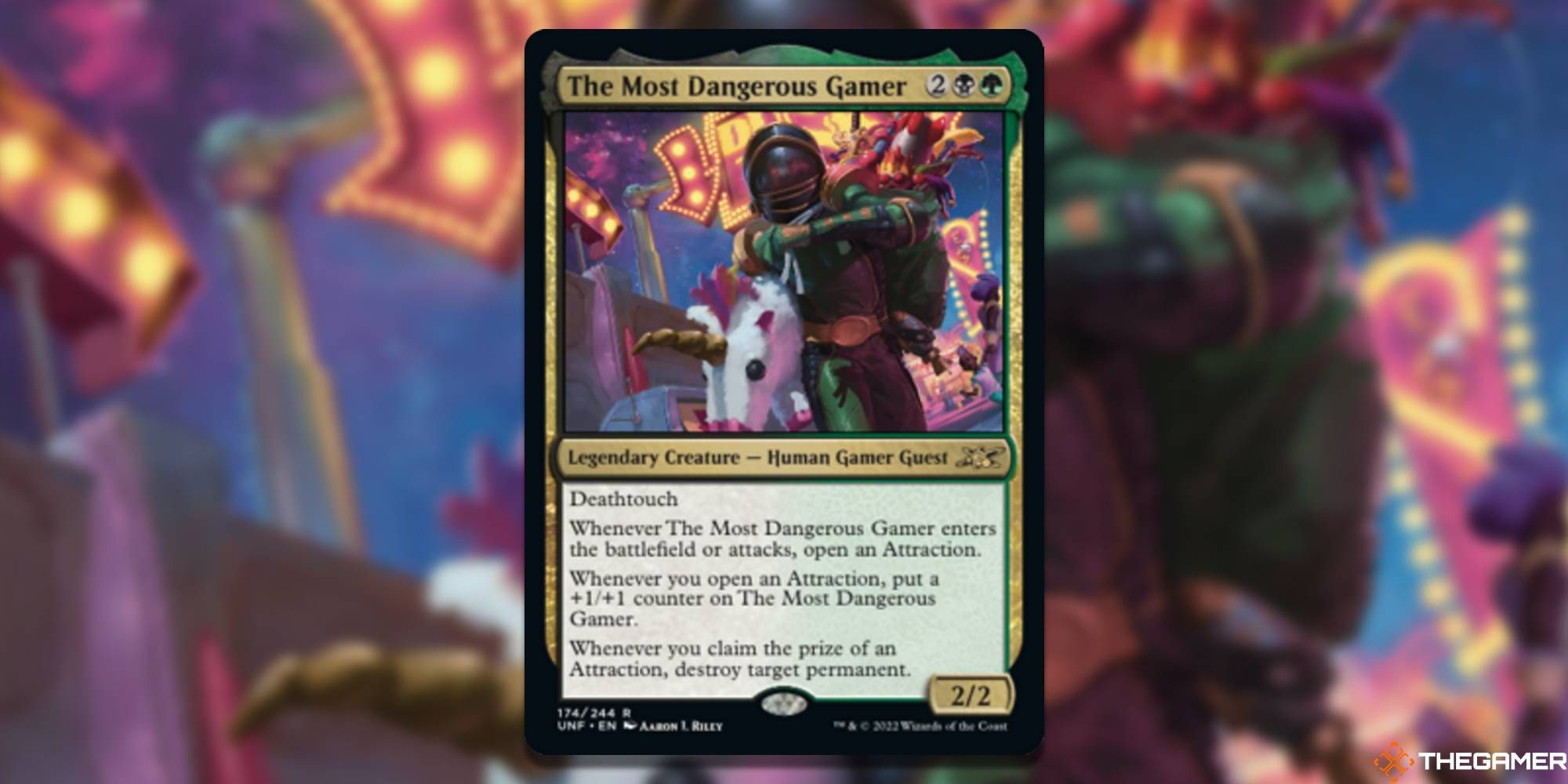 With a little more value than "Lifetime" Pass Holder, The Most Dangerous Gamer has a higher payoff for playing Attractions. When it enters the battlefield or attacks you get to open an Attraction, giving him a 1+/1+ counter, and destroying a permanent when you claim an Attraction’s prize.

Unfortunately, it suffers from the same drawback that “Lifetime” Pass Holder does, where Attractions in general just don’t impact the game enough to warrant the amount of time it takes to set them up. 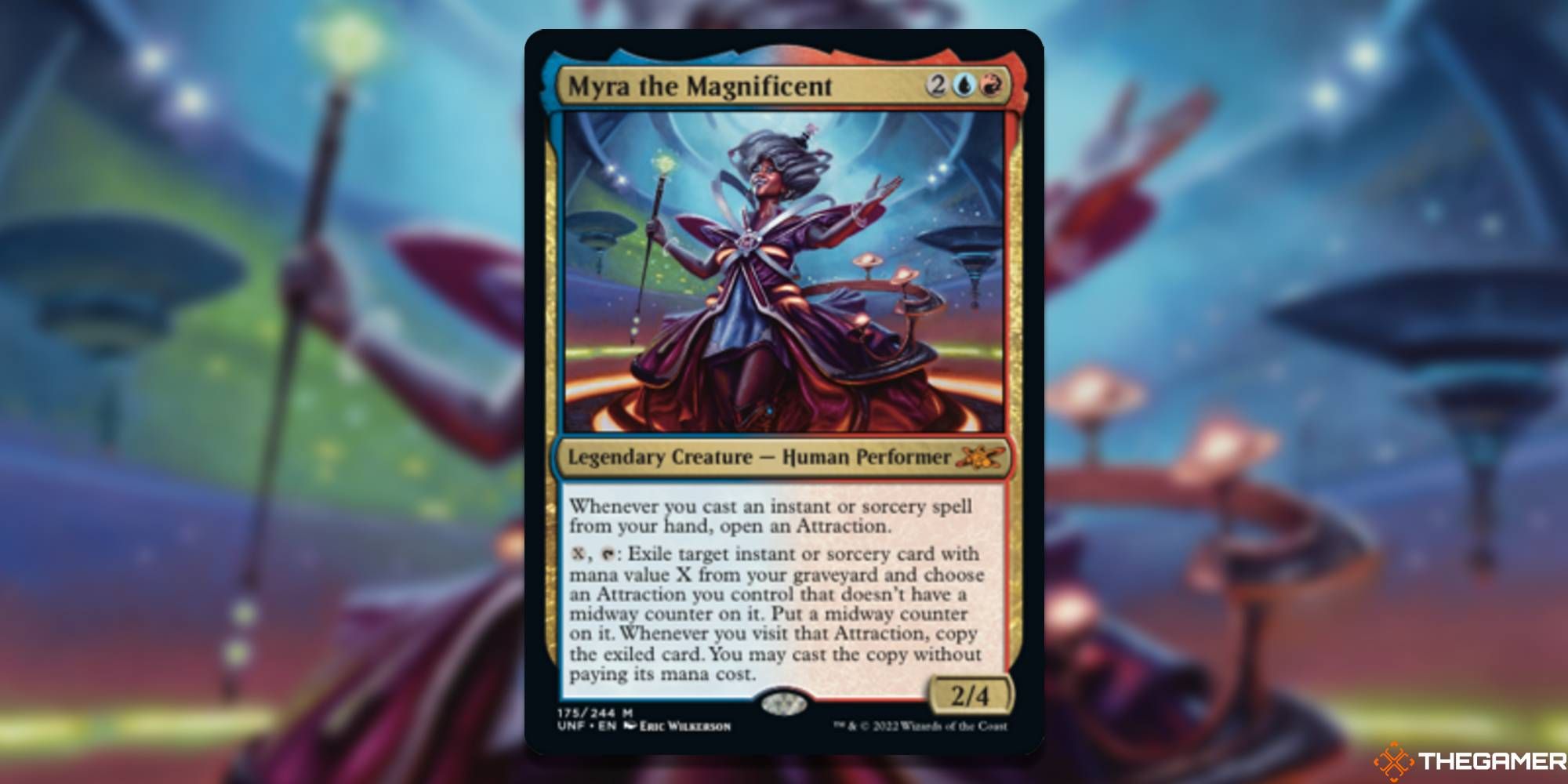 Another card to watch in case Attractions become very good, Myra the Magnificent opens an Attraction whenever you cast an instant or sorcery card.

With plenty of cheap spells in Legacy like Brainstorm, Lightning Bolt, and Daze, you can open plenty of Attractions quickly. However, because Myra costs four mana, you’ll have to hold back a bunch of your spells until after it’s in play to benefit from them. 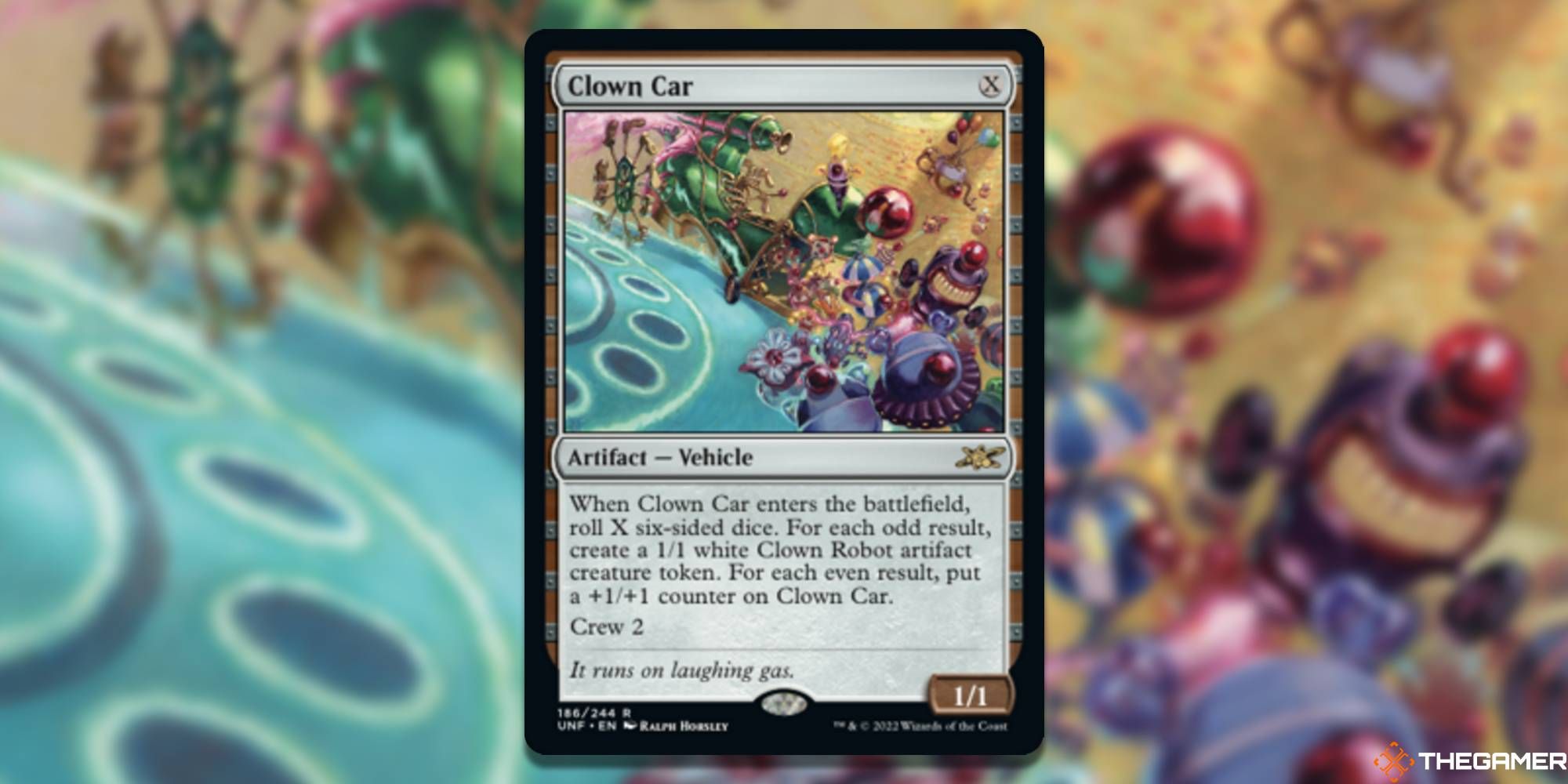 Clown Car is here for one reason, it can potentially go infinite with relatively little work. If you want to activate the climatic clown car combo, all you need is an Auriok Salvagers and a Lion’s Eye Diamond, the key pieces of the Legacy Bomberman deck. This combo deck, which generates infinite mana, could allow you to make infinite clowns if you really want to.

Combine it with some sort of sacrifice outlet and a trigger like Blood Artist to ping your opponent for each clown you sacrifice and you have infinite damage. Of course, the deck already functions smoothly on its own. but this way you can say you won by clown, so which version is better? 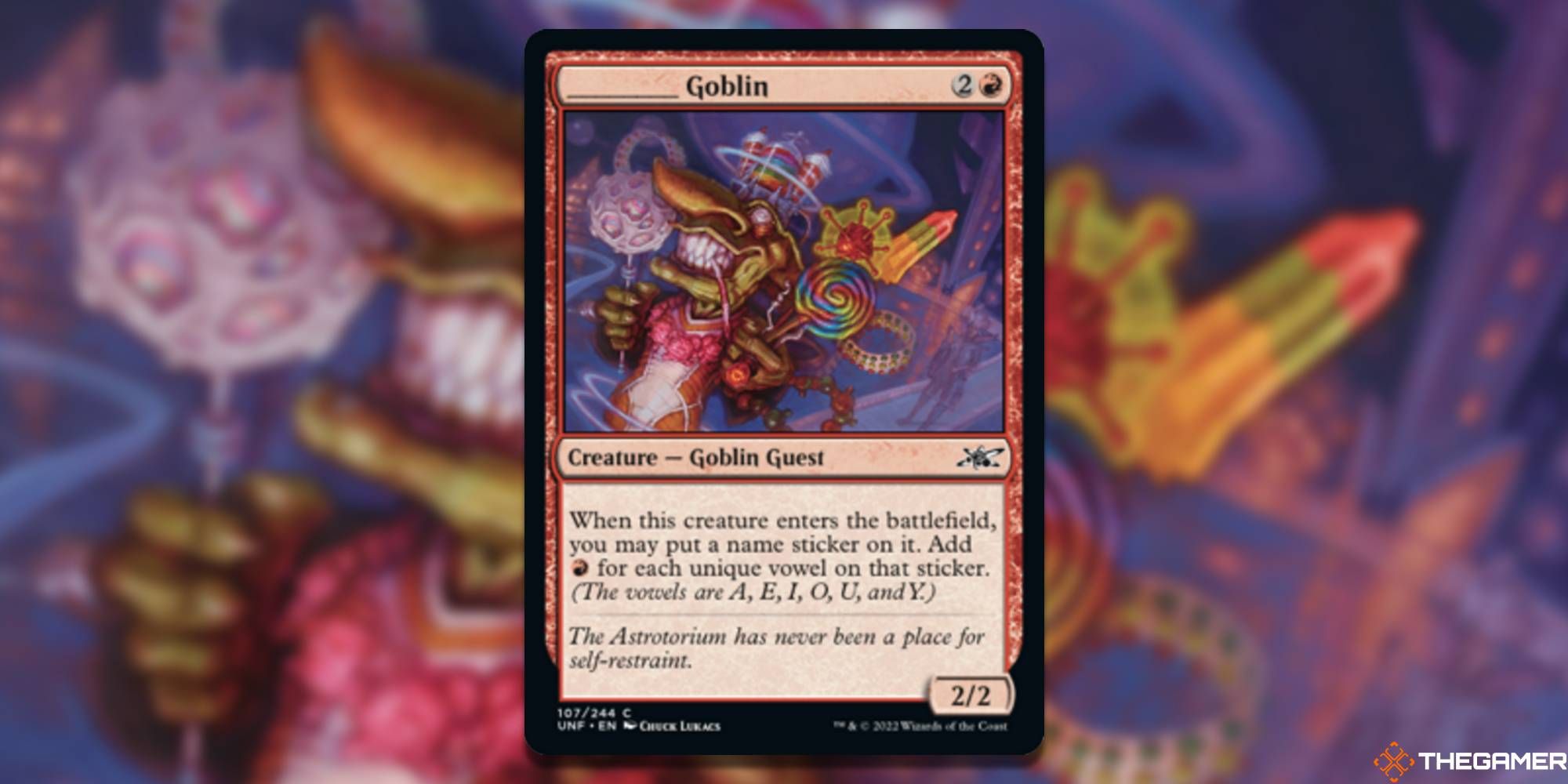 This Goblin has potential in Goblin decks because it can potentially give you up to six mana when it comes into play. All this depends on your stickers and how your sticker deck stacks up. Your sticker deck consists of ten unique sticker sheets, and at the beginning of the game you choose three at random; those sheets are the only stickers you can use in this game.

When _____ Goblin enters the battlefield, you can put a name sticker on it, giving you red mana equal to the number of vowels in that sticker. You’ll be generating at least four mana every time, with lower odds of generating five and six red mana, depending on your sticker deck. 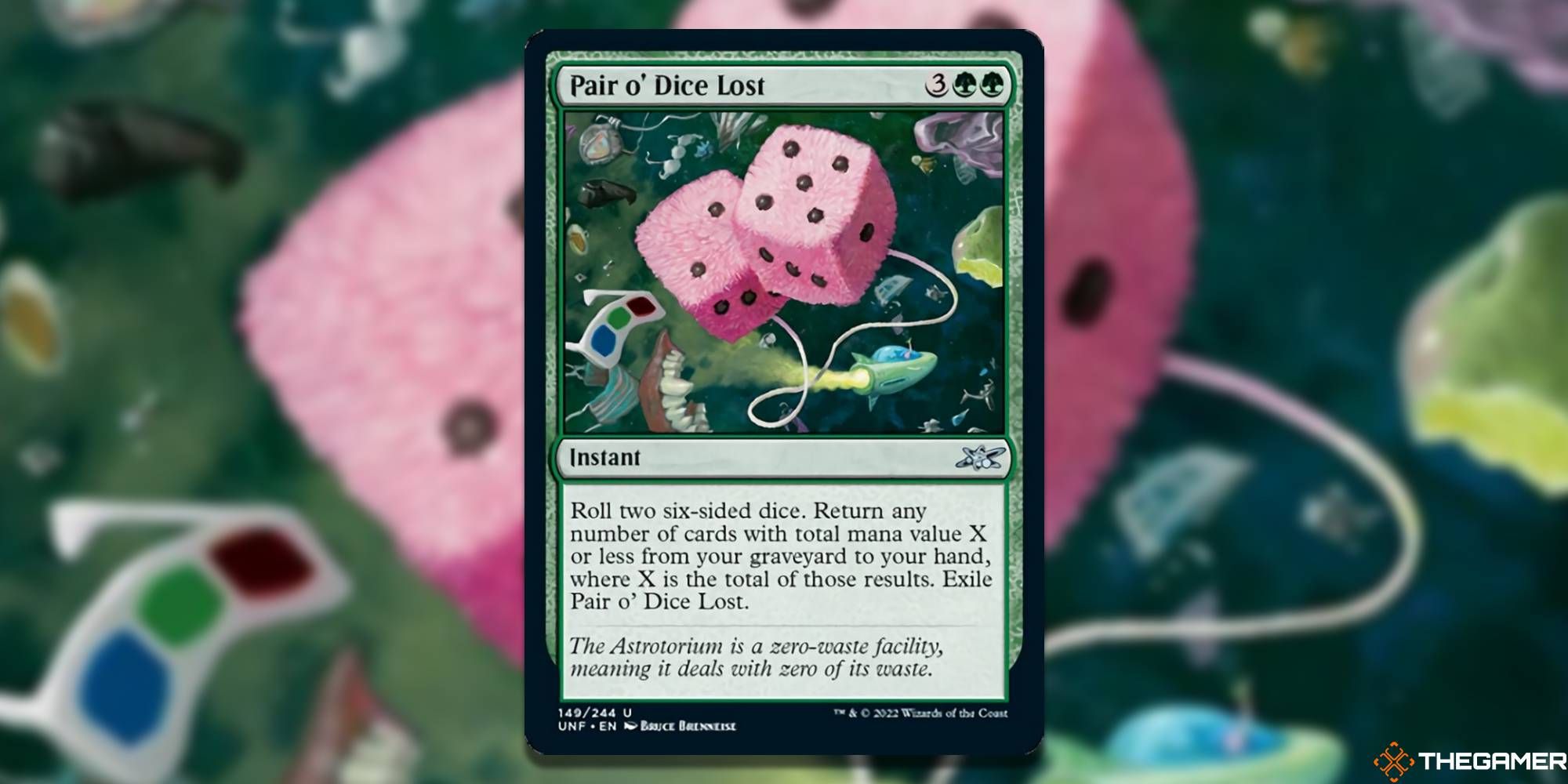 This five-mana instant has lots of potential in combo decks, allowing you to return valuable combo pieces if you need a little extra push. With Pair O’ Dice Lost, you roll two six-sided dice and return any number of cards with a total mana cost less than the result of the dice roll.

When your dice, you have a higher chance of rolling a seven than any other die result, giving you solid odds to return a good number of cards. The real payoff is how you can return all your zero-cost cards like Lotus Petal and Lion’s Eye Diamond, alongside other spells like Dark Ritual to ramp up mana for your next spell or to increase your storm count 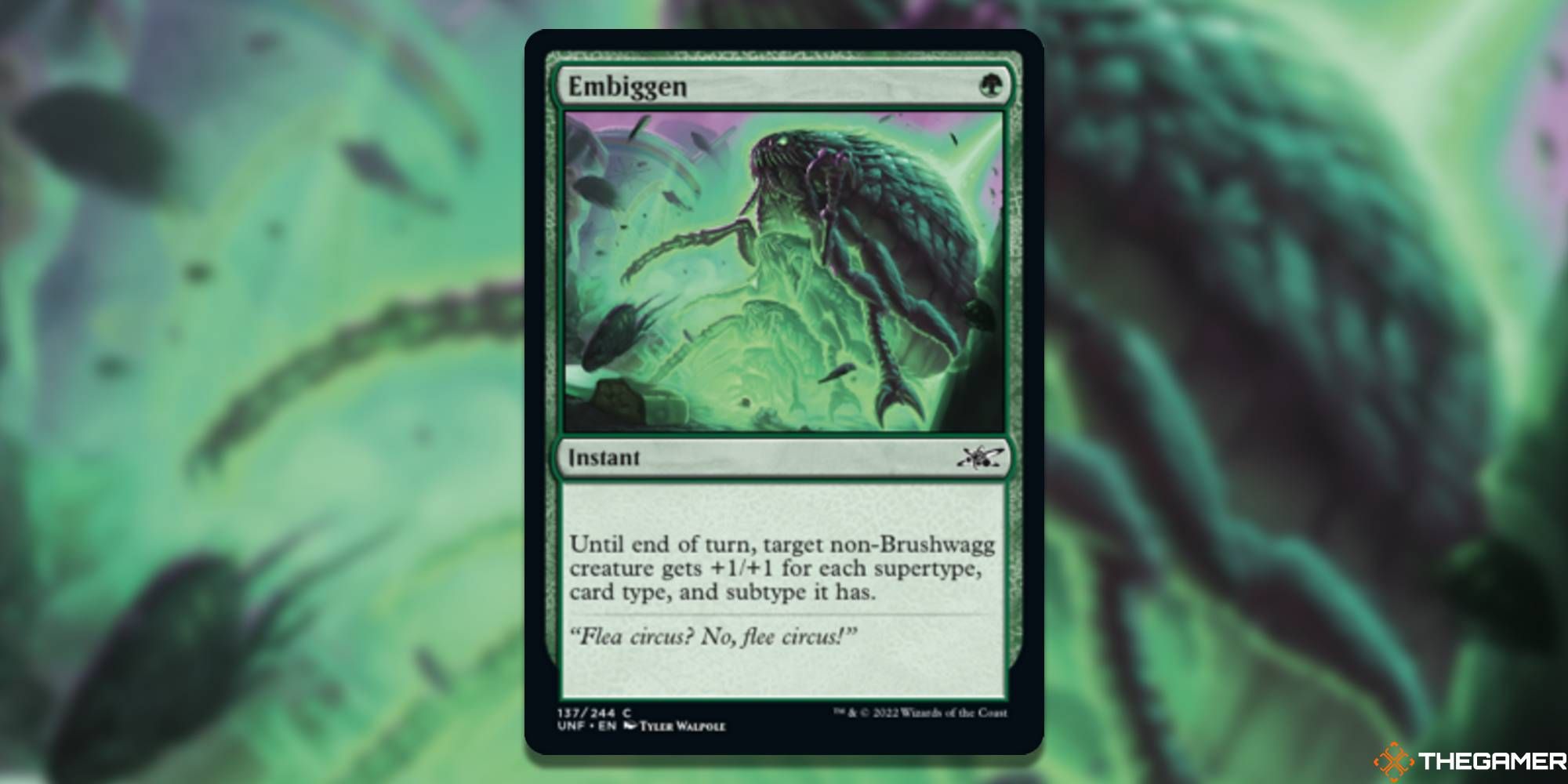 Quite possibly one of the best pump spells ever printed, Embiggen offers a brand new way for Infect decks to poison their opponent.

As infect players are well aware, not that long ago a mass update went out that gave a ton of cards the Phyrexian creature type if they were of, or created by, Phyrexia. This includes every card with infect. On average your creatures are getting +4/+4 for just one mana. 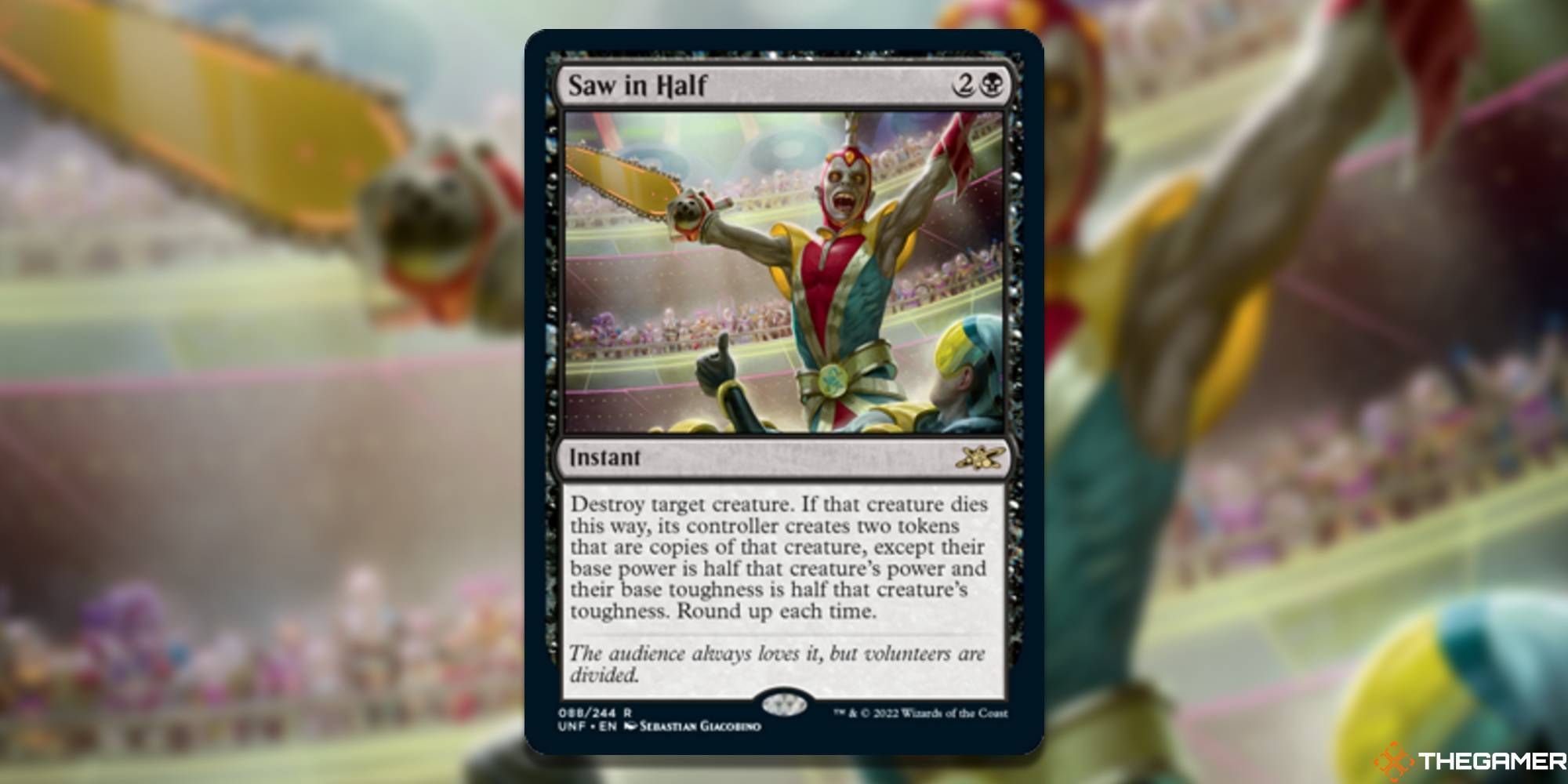 One of the weirdest Eternal playable cards from Unfinity is also one with plenty of potentials. With Saw in Half, you can destroy a creature to create two copies of that creature with half of its power and toughness on each token.

Hypothetically, let's say you reanimate an Archon of Cruelty, then destroy it with Saw in Half. Each token will be a 3/3 and will cause two more triggers of Archon of Cruelty’s enter the battlefield effect. Is this the best use of Saw in Half? Probably not. Will it force your opponent to discard a total of three cards and lose nine life while you draw three cards and gain nine life? Absolutely.