Dominaria Remastered is an all-reprint set featuring cards released from any set in Magic: The Gathering's history that took place on the Plane of Dominaria. Since it is one of the most visited Planes in the game, there are plenty of fantastic cards available in all the colors in Dominaria Remastered.

Blue is one of the biggest winners when it comes to the cards they are getting in Dominaria Remastered. Reprints are highly sought after due to how powerful they are, and see play across multiple formats. Many of the best blue cards are easy to cast and give you a significant advantage over the course of a game. 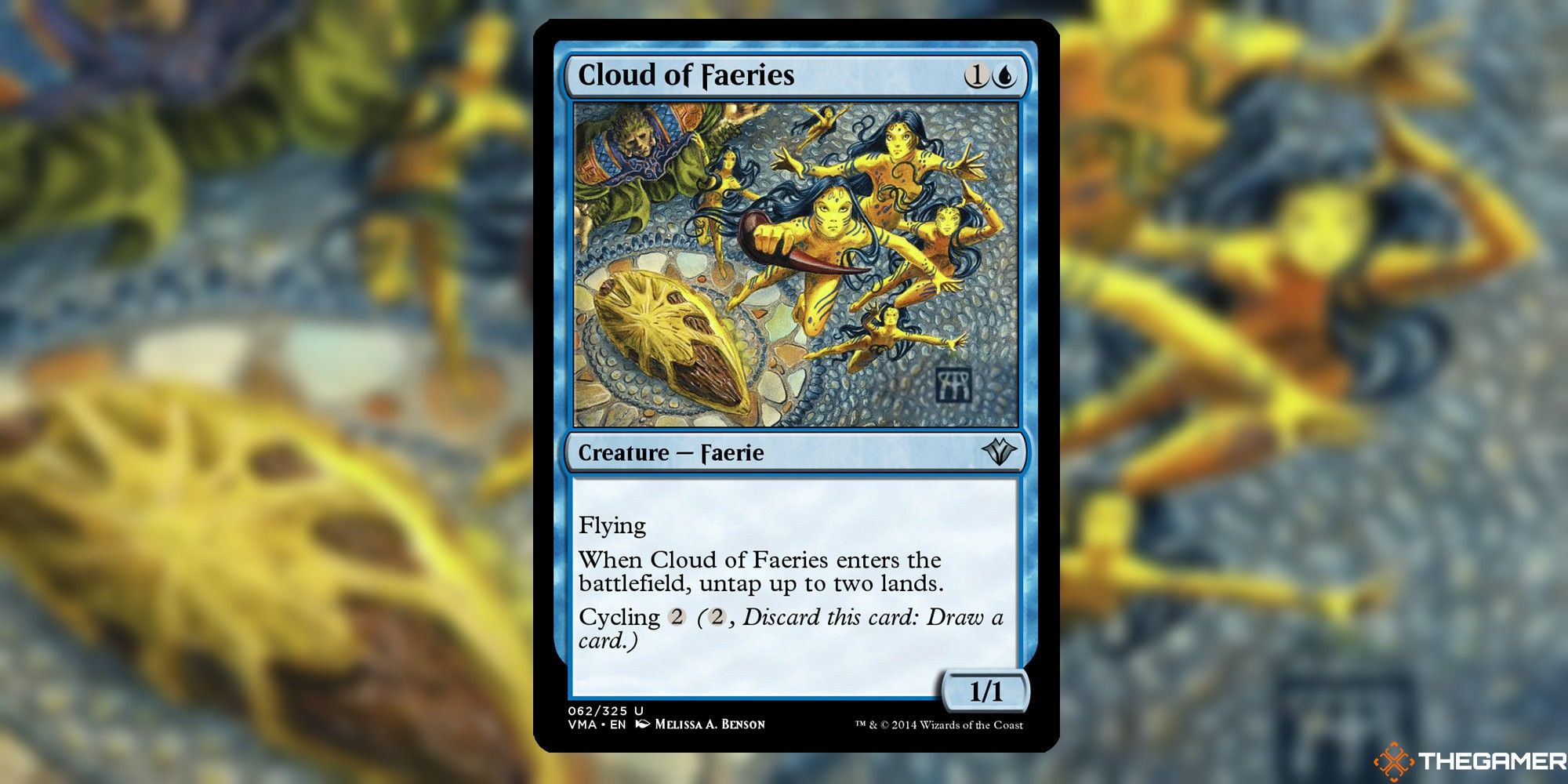 Cloud of Faeries is a deceptively simple card, but it was so powerful it proved to be too good for Pauper and had to be banned. It is castable for two mana and lets you untap two lands when it enters the battlefield.

This doesn't mention what lands you have to untap, so you can untap a dual land that comes in tapped. In addition, valuable lands that give more than one mana can be untapped afterwards, so you can use them to give you a drastic advantage in mana and let you snowball the board state. 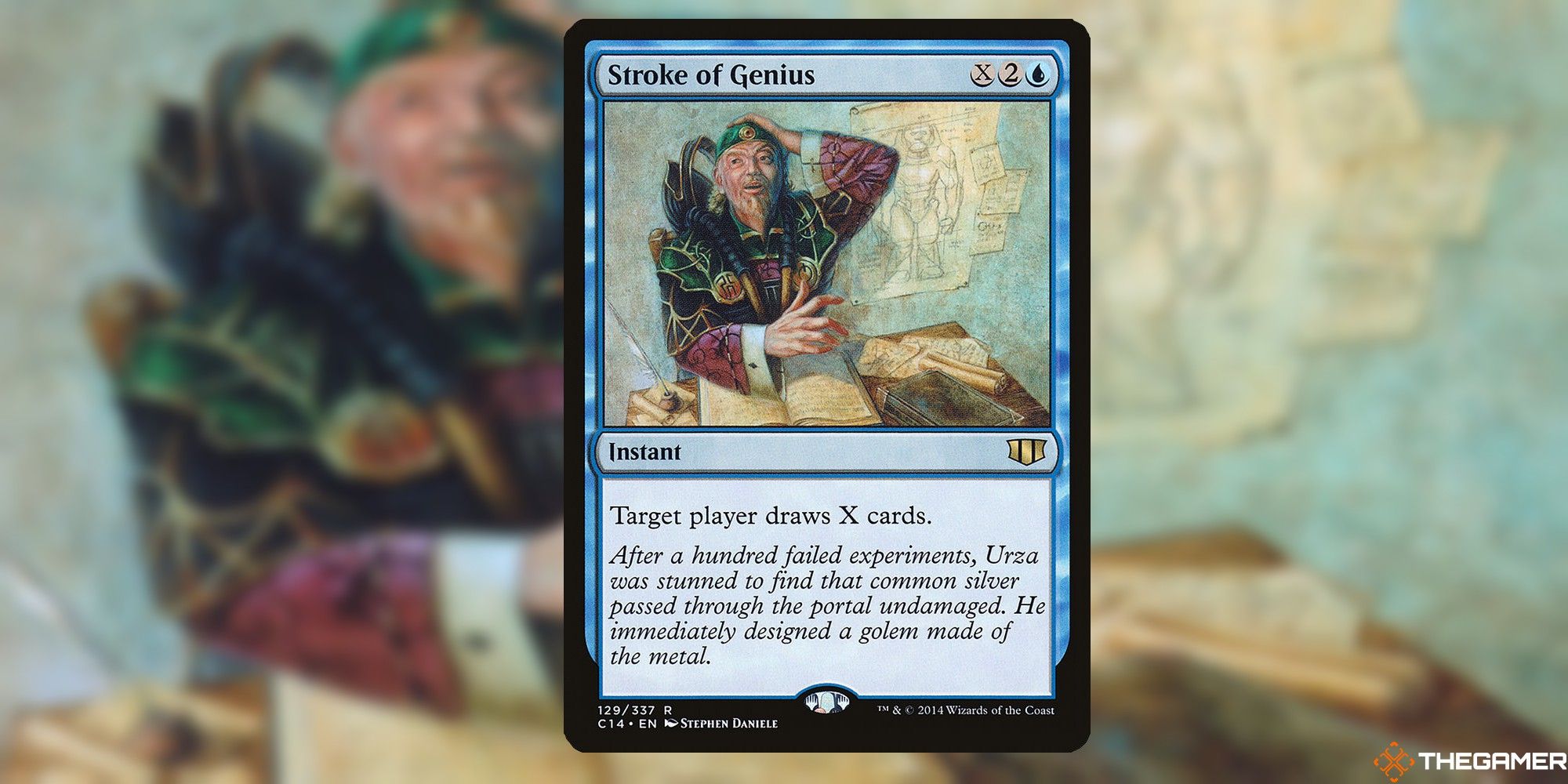 Stroke of Genius is a simple draw spell, but one that can draw you a ton of cards if you have a lot of mana to use. Generally, blue leaves a lot of mana open to cast counterspell and interaction, and they are also great at drawing cards.

What sets Stroke of Genius apart from the rest is that it is an instant spell. This lets you hold mana to respond to opponents, and when your turn is about to start, you can use it to tap out and draw plenty of cards. 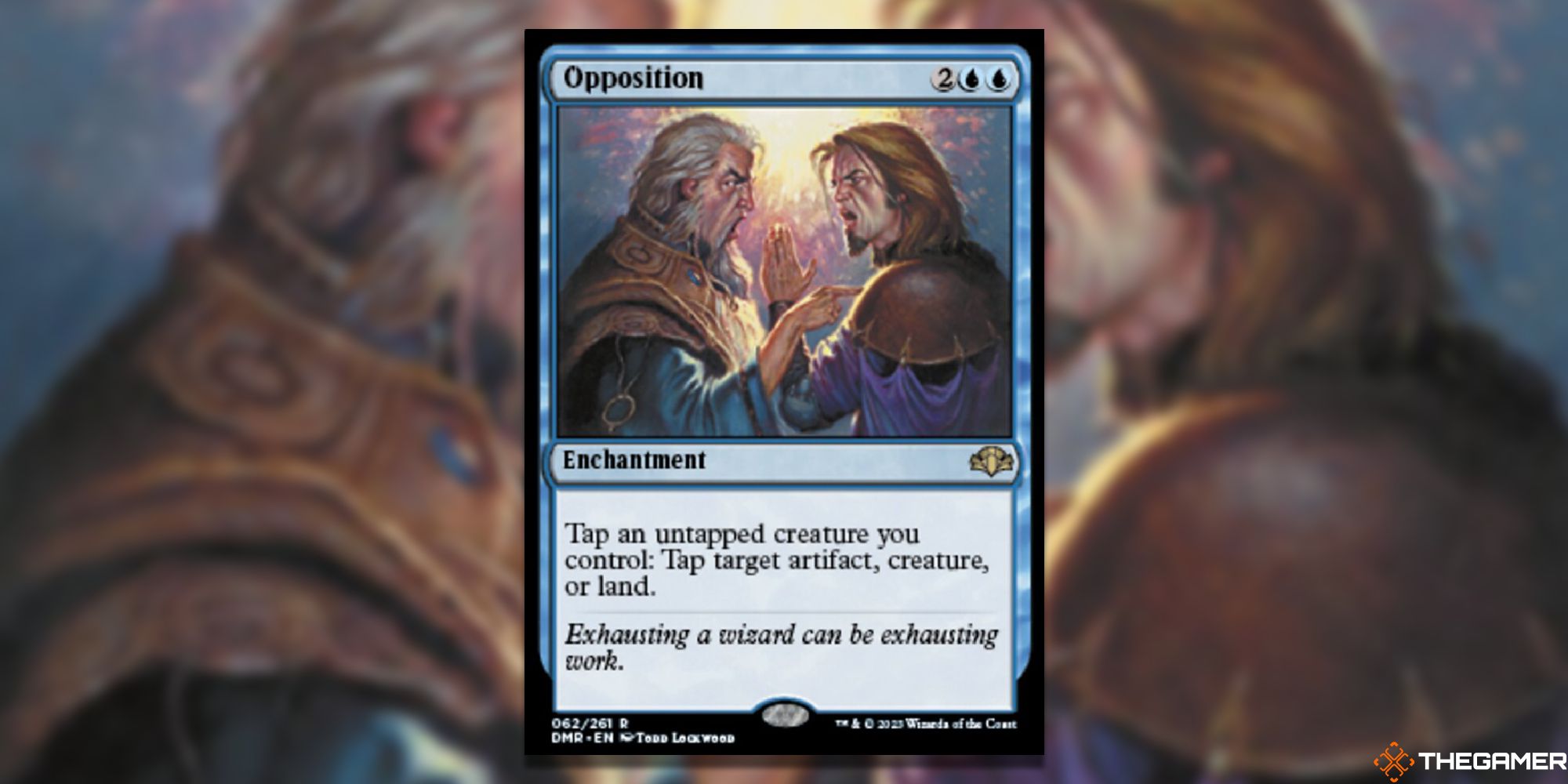 Opposition is a fantastic enchantment, letting you use it both defensively and offensively. It allows you to tap down artifacts, creatures, and lands. You can force a powerful land to be tapped during an upkeep, which then forces the mana it tapped to be lost when the phase changes.

When you're going in for attacks, you can tap down your opponents' creatures to ensure they don't have blockers. It does require you to tap a creature you control, but decks running Opposition often have a lot of creatures on the battlefield — such as tokens — to ensure you can always use the ability. 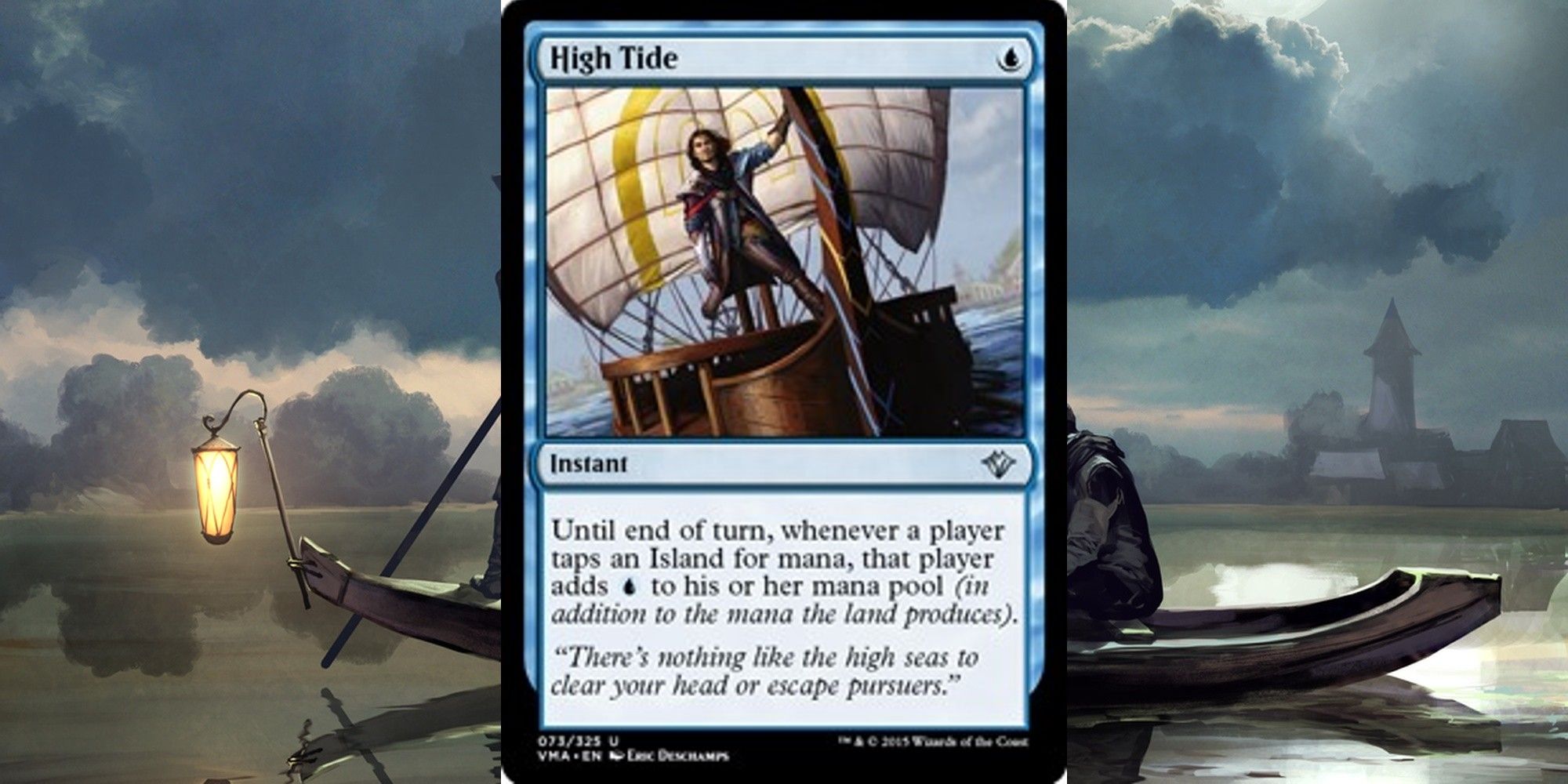 High Tide is another card on the Pauper ban list for being too strong. For just one mana, you can make all your Islands tap for double mana. It does affect all players, but if you're the only one playing with Islands, it allows you to ramp in blue, something that is uncommon for the color.

The card is fantastic for getting powerful spells out early or playing multiple in a turn. It's good both late and early game, as it can be used to set up your board state as well as setting up your game finishers. 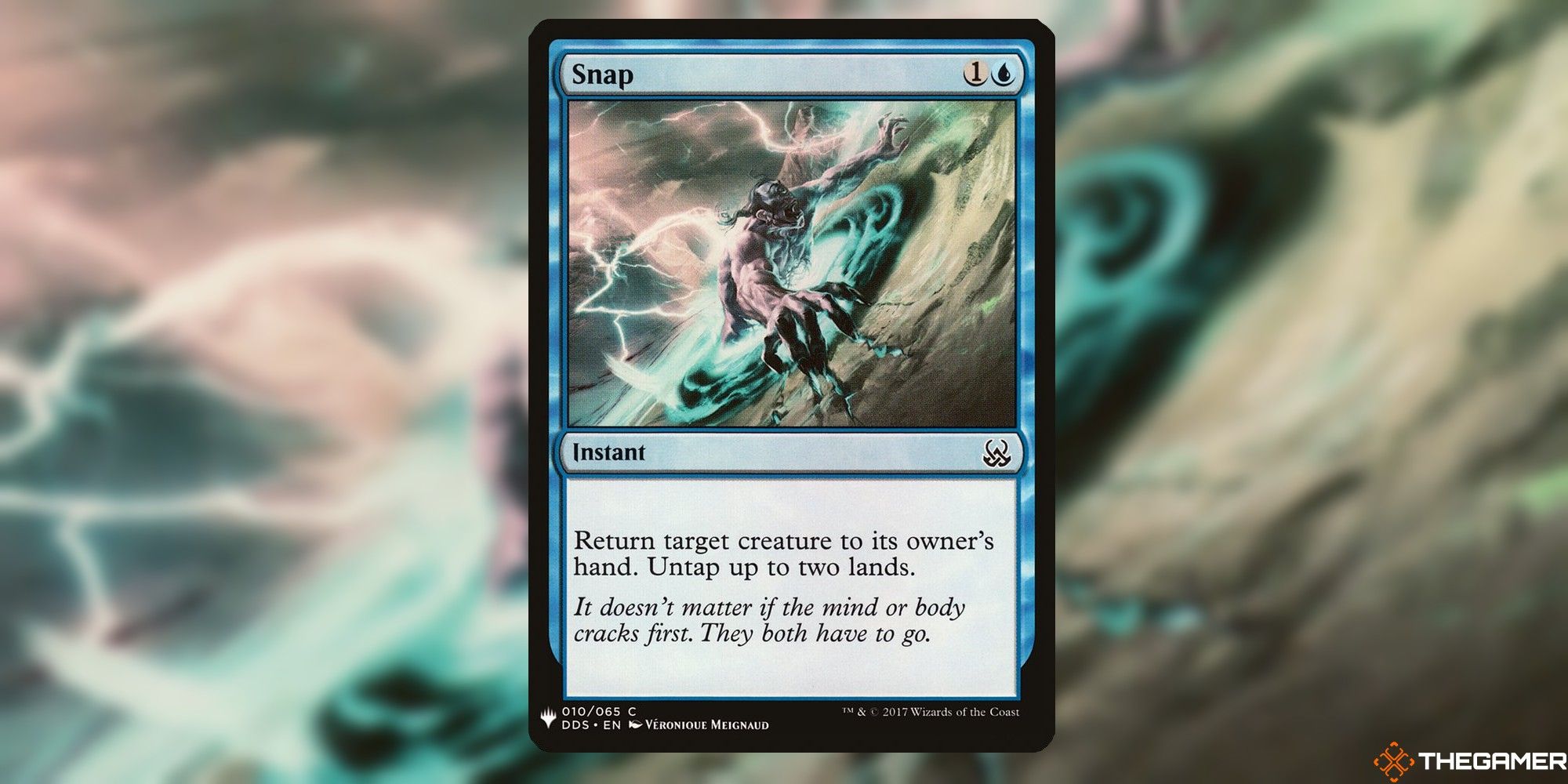 Snap is a fantastic card, as it is essentially a free card to cast. You use to mana to pay for it, and then you get to untap two lands. Not only that, but it allows you to return a creature to the hand, which can be used to save your own creature or re-cast it for an enter the battlefield trigger or to push your opponent back on their board state.

Like other cards that untap, Snap can untap any lands, allowing you to reuse your powerful utility lands to push your advantage even further. 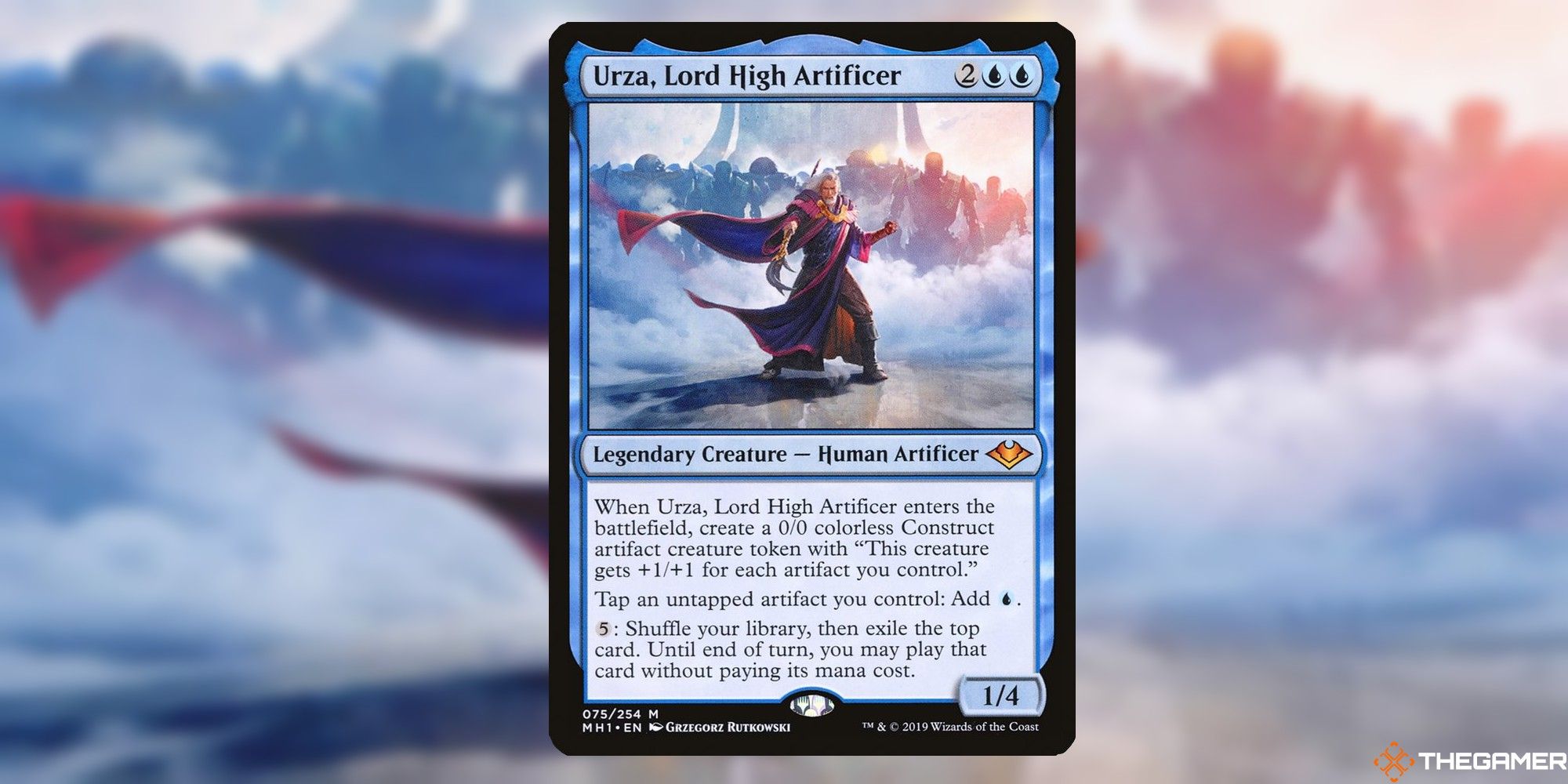 Urza, Lord High Artificer is a phenomenal card, seeing play in formats such as Modern and Commander. It allows you to easily ramp by turning your artifacts into mana dorks that can be tapped to add blue mana.

This feeds into its second ability, which lets you cast spells for free off the top of your deck. Urza, Lord High Artificer is only four mana to cast, allowing it to hit the battlefield early to start building advantage with it right away. If you have ways to get it off and back onto the battlefield, you can even get free Construct tokens that get boosted by the other artifacts on the battlefield. 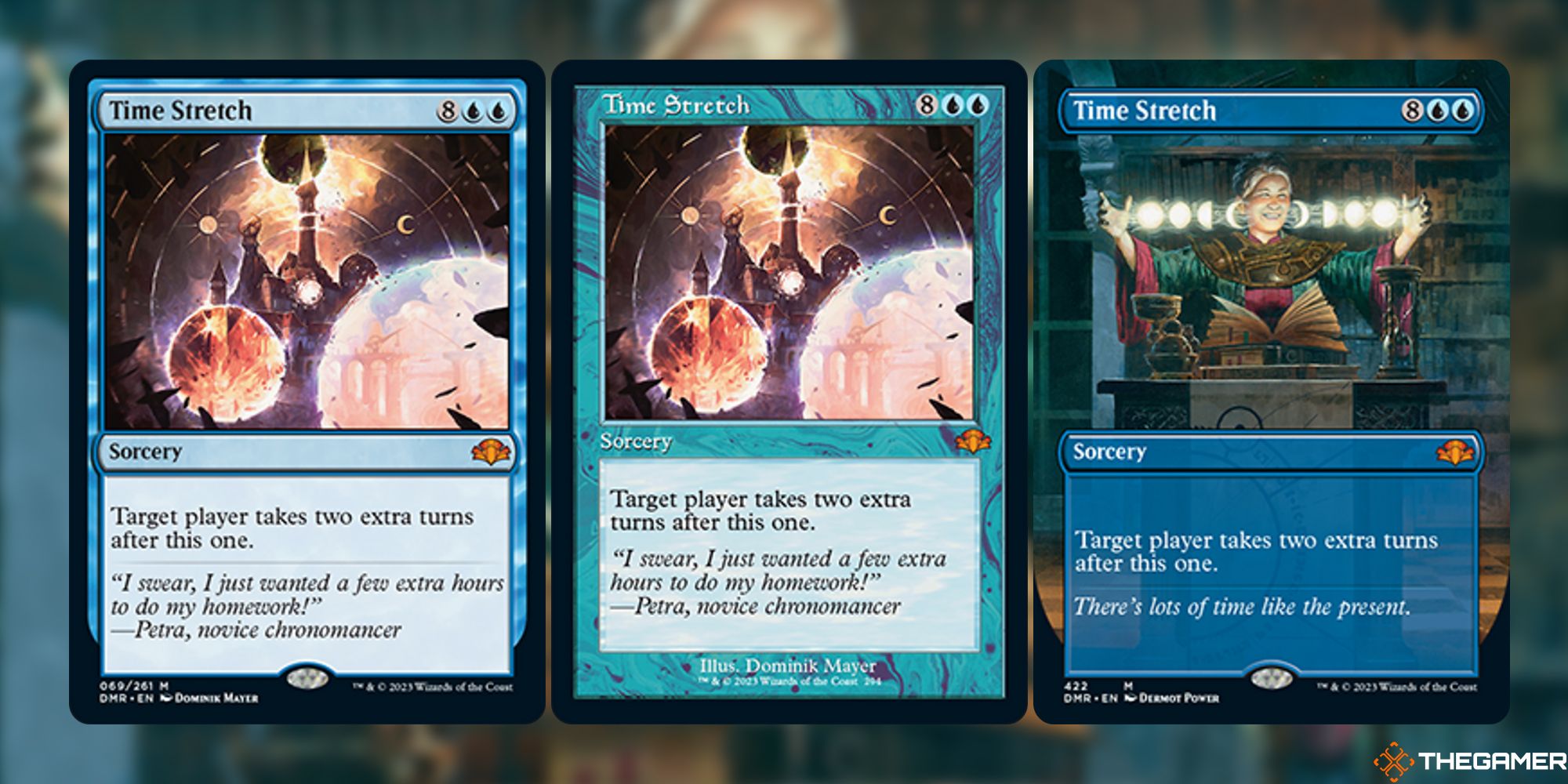 Time Stretch is one of the many extra turn spells in the game. It's especially welcome in Dominaria Remastered, as it has not seen a printing since 2007's Tenth Edition set. It does cost a hefty ten mana to cast, but if you do manage to cast it, you are often winning the game.

Unlike other extra turn spells, Time Stretch lets you take two extra turns instead of just one. Since it goes to the graveyard after use, it can be recycled for reuse. This allows you to chain Time Stretch into Time Stretch, and get infinite turns. 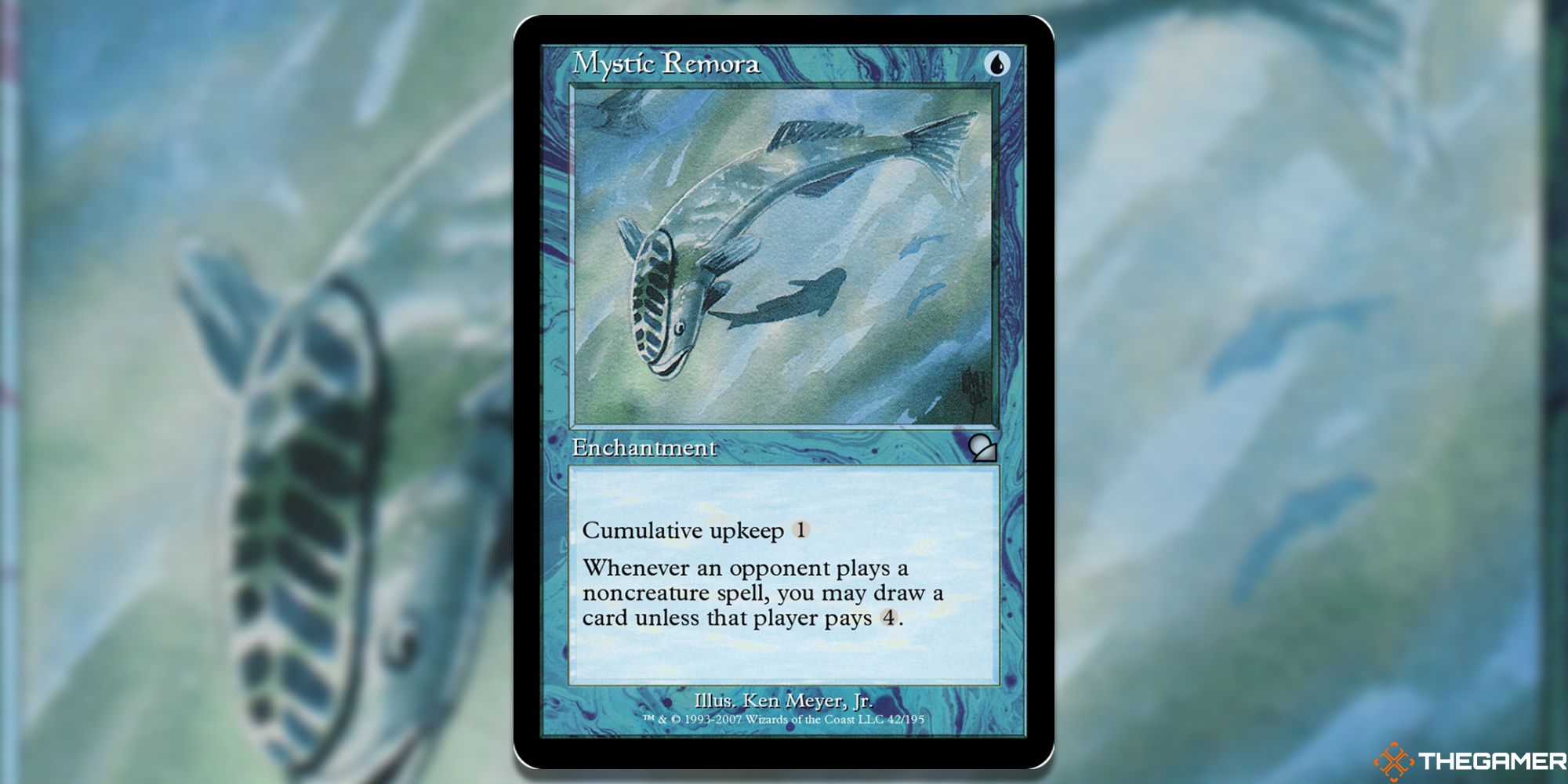 Mystic Remora is a Commander staple and one of only two cards on the Pauper Commander ban list for how good it is. Whenever an opponent casts any non-creature spell, you draw a card unless the one casting it pays four mana. It is rare to have the mana to pay this if you want to advance your board state, often guaranteeing a card from Mystic Remora.

While it does cost mana to keep on the battlefield, you can keep it up for multiple turns since it only costs one mana to cast. This lets you have a constant threat, punishing anyone for simply casting noncreature spells. 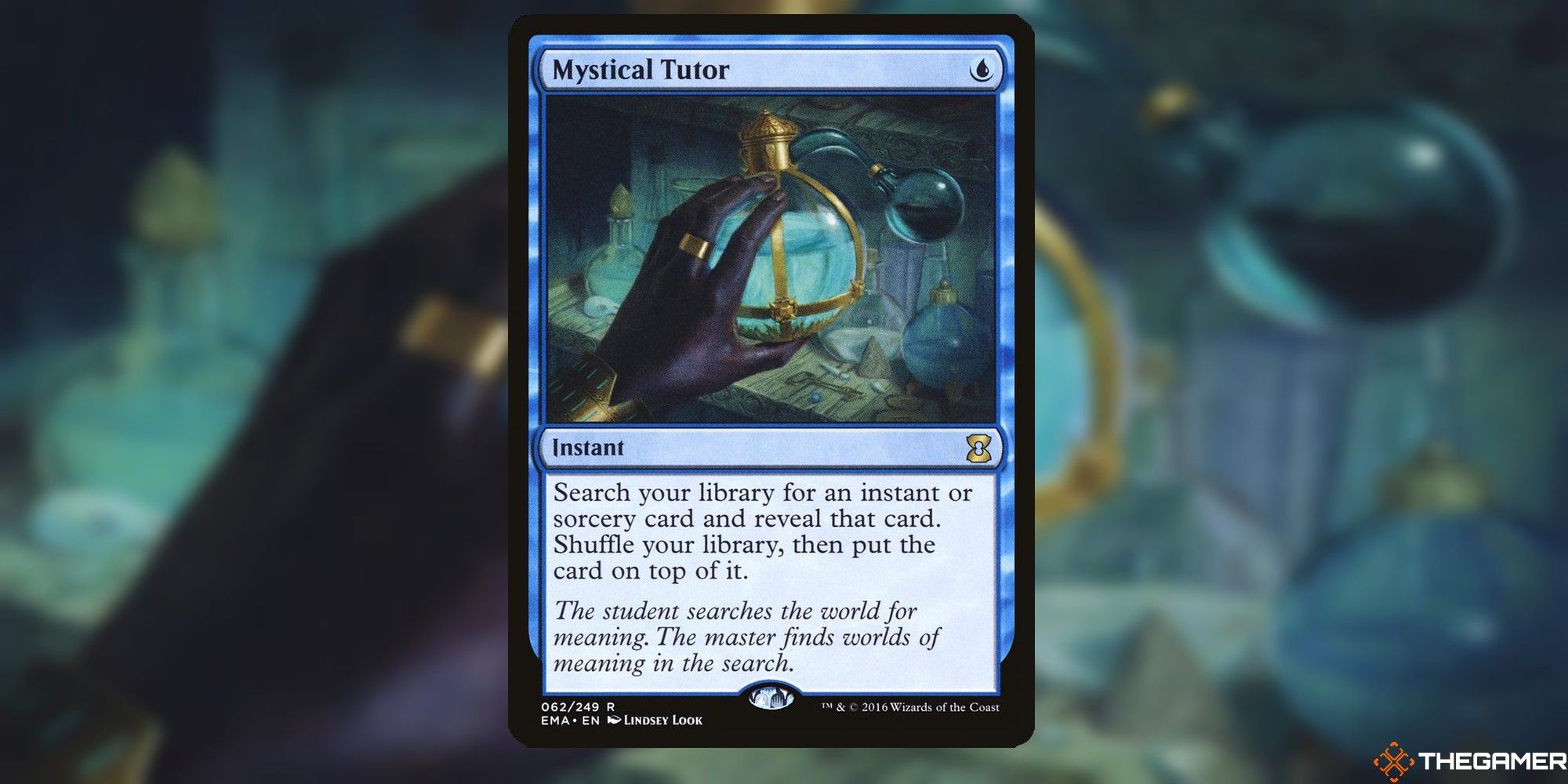 Mystical Tutor is one of the best searchers in the game, requiring a ban in Legacy and restriction in Vintage — the game's two most powerful formats. It's a Commander staple as well, seeing play across many decks that run blue.

Mystical Tutor lets you search out for any instant or sorcery spell and put it on top of your deck. This allows you to search for any of your win conditions, or even another tutor that can search for any card to get any card out of your library. Having a guaranteed draw is fantastic, and the fact it searched out some of the best cards in the game is even better. 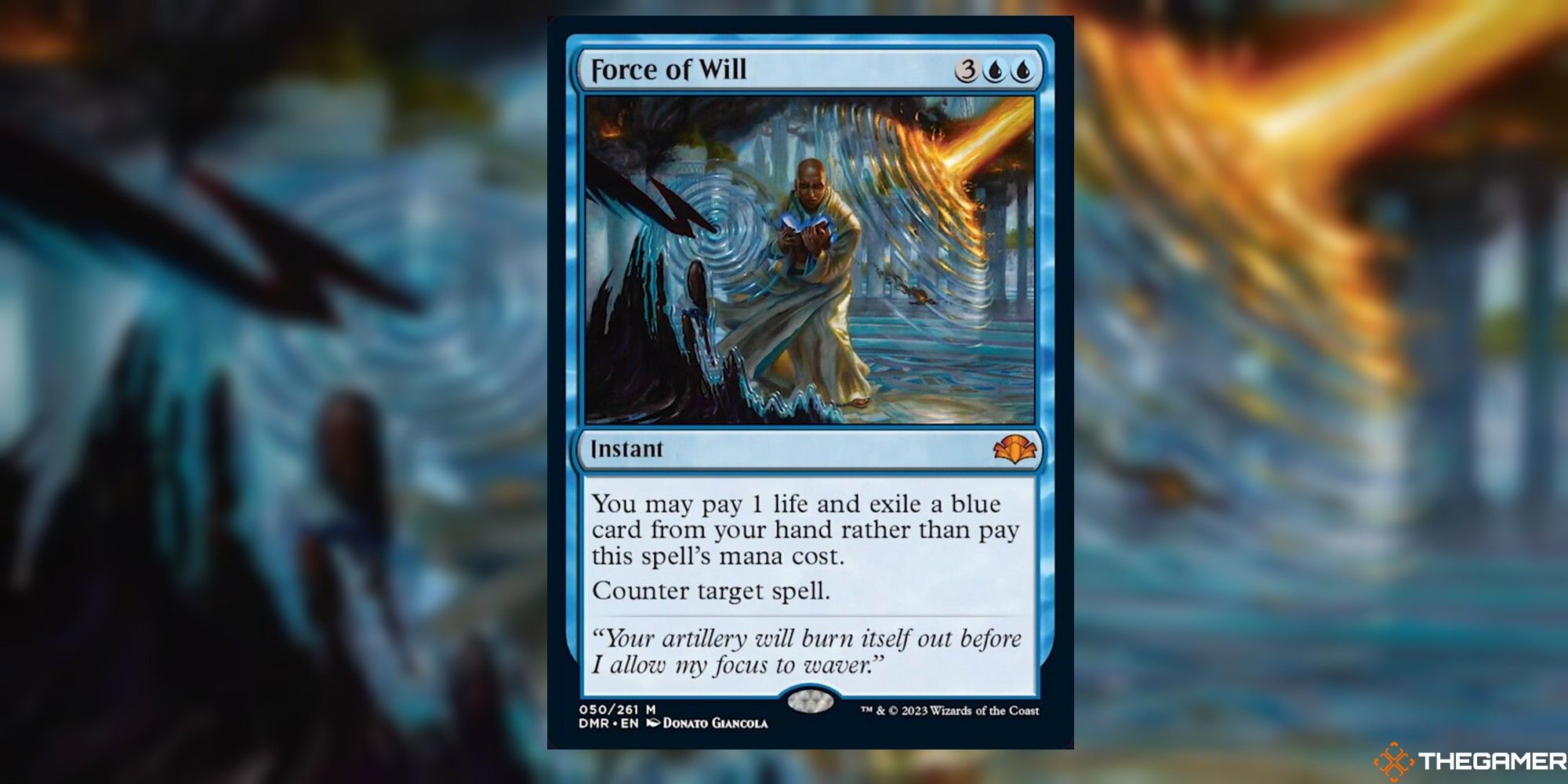 Force of Will is one of, if not the best counterspell ever printed. It sees a ton of play in all the formats it's legal in, largely due to the fact it is a (mostly) free counterspell. It can counter anything, and you can choose to pay one life and exile another blue card from your hand as opposed to paying five mana to cast it.

It is very useful for winning counterspell wars. It can even catch opponents off guard when they think you are tapped out and do not have a counterspell, leading to them casting their big spells only to have them countered.